We got trouble right here in River City 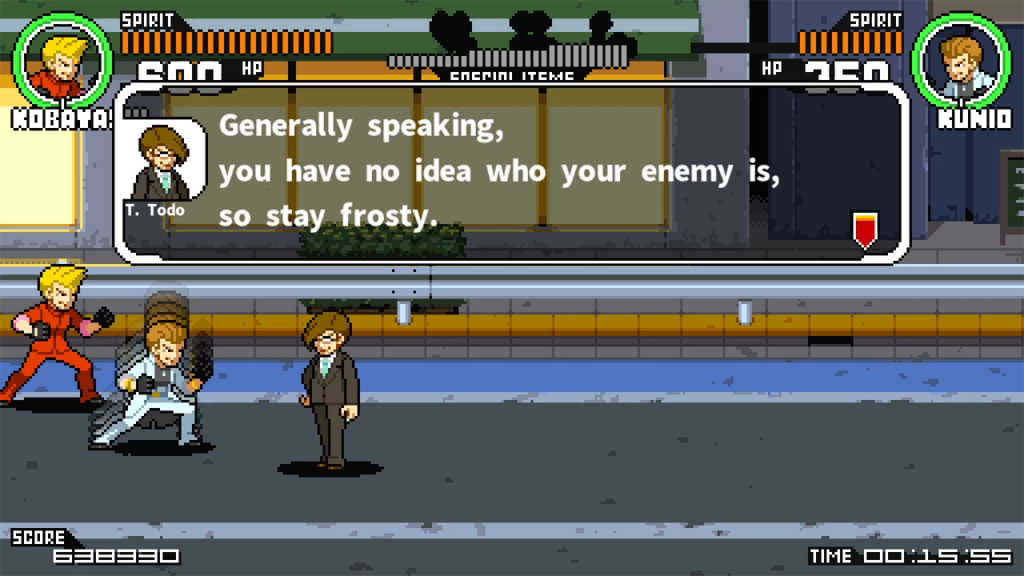 I really, really wanted to love Stay Cool, Kobayashi-San!: A River City Ransom Story. A Kunio-kun spin-off on the heels of River City Girls, I had high hopes for the next installment in the franchise. And while some of those expectations were met (surprisingly), there were quite a few letdowns as well.

First, understand why fans of the series have every reason to be excited: according to the game’s steam page, “The original directors of Nekketsu Kōha Kunio-kun (aka Renegade): Yoshihisa Kishimoto and Downtown Nekketsu Monogatari (aka Street Gangs/River City Ransom): Mokeke Sekimoto, are teaming up to bring you a new reckless action game !” which is honestly about as much of a rockstar cast as you can get. Legendary directors who brought us legendary games should be able to make some magic again, right? 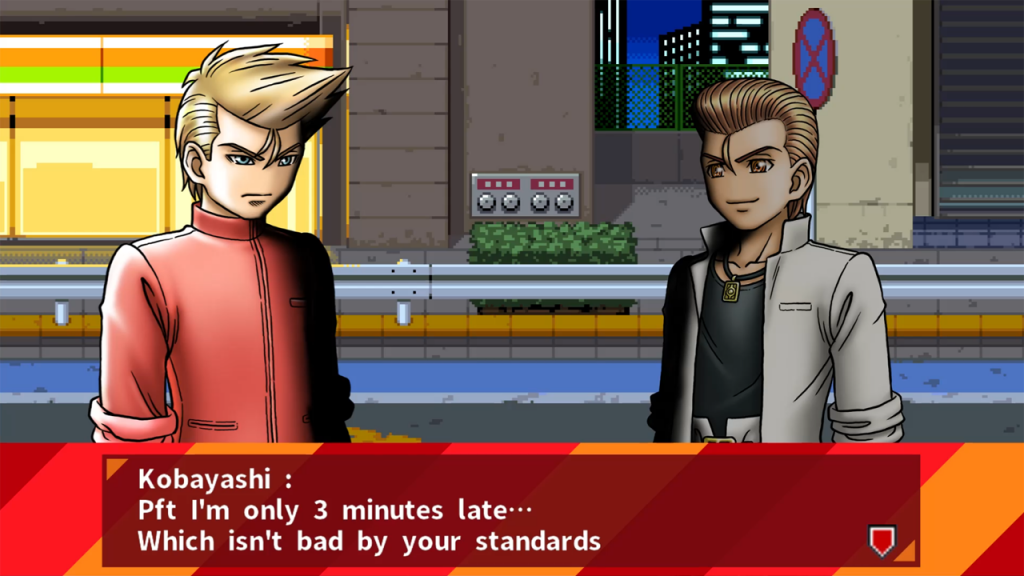 Let’s start at the beginning.

In Stay Cool, Kobayashi-San!: A River City Ransom Story, players take on the role of Masao Kobayashi, who some NES-era players might recognize from River City Ransom as Alex’s rival. Now, roughly 30 years later, players will follow the rival’s story as he spends his middle school days trying to recover someone close to him (you) while taking down an evil organization with a time regulator; also, negative energy zappers, UFOs, a horde of NPCs, and save cats are there.

If it sounds confusing… it is. 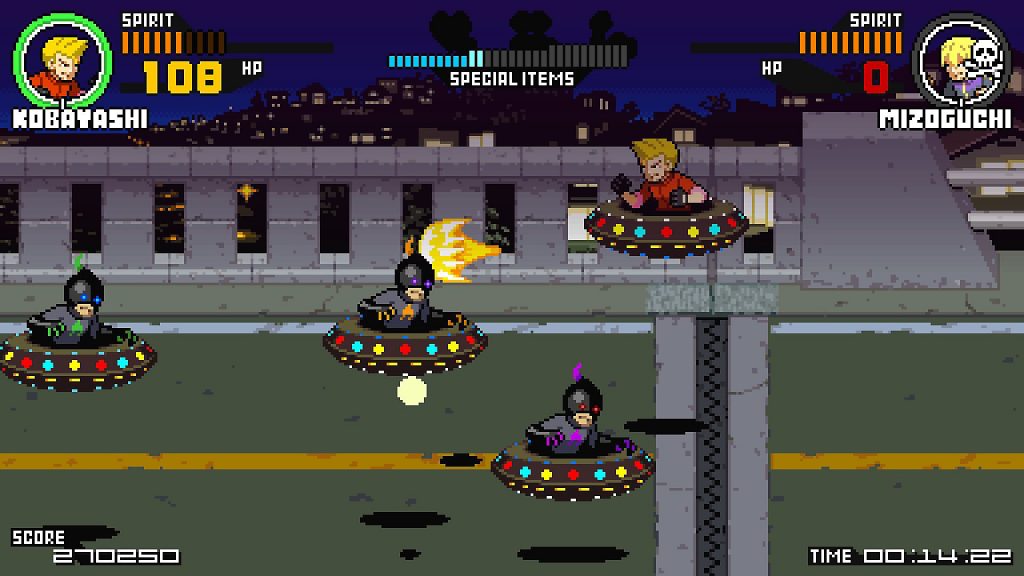 When it comes to 2D side-scrolling beat-em-ups, I’m not really looking for much in terms of a storyline — since one end of the screen is usually “point A” and the other is “point B”, it’s usually a tale of progression for whatever reason and is usually straightforward. In River City Ransom, this wasn’t the case — the non-linear gameplay made a typical side-scroller feel like an open-world, which was ahead of its time in 1988. Stay Cool, Kobayashi-San!: A River City Ransom Story employed the same strategy, even going as far as designating turfs for different gangs.

That’s about where the similarities end, unfortunately; instead of letting players know via text at the bottom whose turf you’d just entered in River City Ransom, Stay Cool, Kobayashi-San!: A River City Ransom Story asks players to roam around extensively in areas that end up melting together, exhausting even the biggest Kunio-kun fan as they search for specific gangs to beat up. 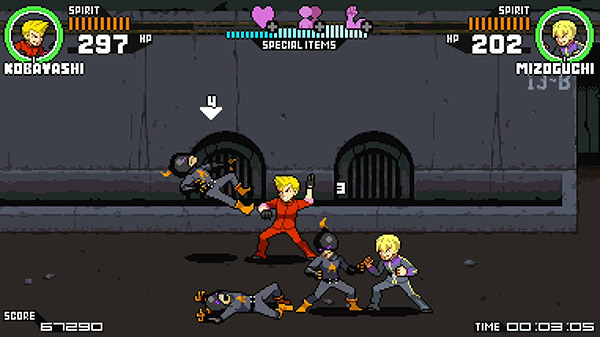 Why search for various gangs? Because there are five different bosses to beat, which only appear after defeating 30 members from each of the five gangs. Said five gangs looks pretty much exactly the same save their color differences, and there’s no indicator to let the player know you’re on “Orange’s Turf” or “Blue’s Turf” — you just have to get lucky and aimlessly wander into their territory, which seemed to change at random (something I can’t confirm but it definitely felt that way).

For a beat-em-up, beating up baddies seems like a normal goal to have, but to beat 150 specific enemies minimum — not including the extra  baddies you’ll beat just because they’re there — before being able to proceed was definitely frustrating. I played this section for a little over two hours before finally getting the necessary enemies, which would definitely not have taken so long if I had just been able to figure out where specific turfs were. 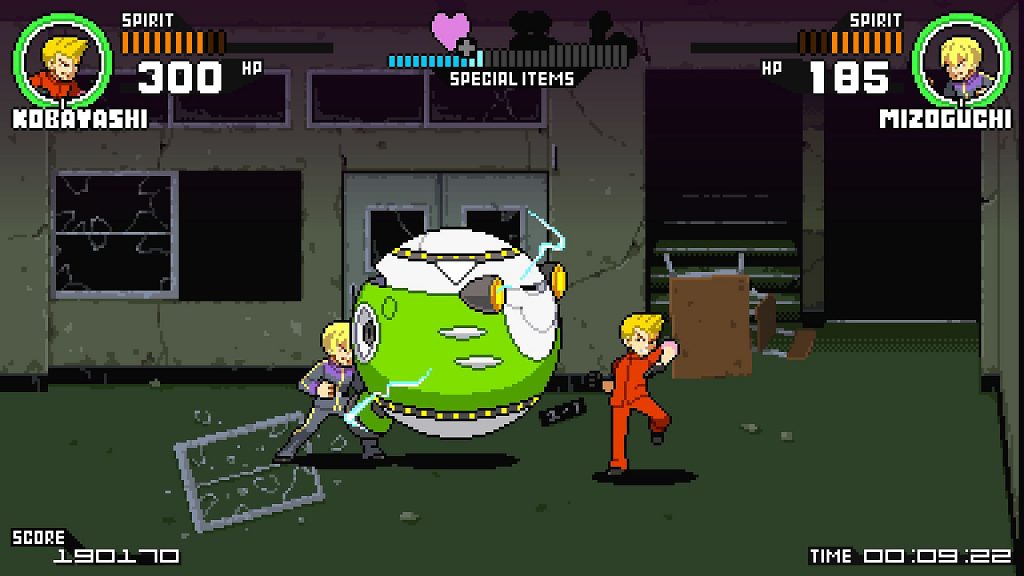 One thing that nicely breaks up the monotony is that the mini-bosses appear immediately after beating 30 same-color baddies instead of giving you a gauntlet of five at the end before the big boss, but even then it’s hit or miss on what you’re going to get. For example, the green boss gets into a spherical contraption which shoots balls of light and can suck you in then spit you out, which deals a lot of damage and provides a real challenge, while the orange boss simply throws his underlings at you — the same orange gang members you had to beat in order to even find him! Disappointing.

Fighting alongside Kobayashi-san is the time regulator Misoguchi, who is supposed to help ensure the future stays the same… or something. Like the boss battles, Misoguchi is a mixed bag; on the one hand, you’ll need his light-bullet moves to defeat the energy zappers, who don’t take damage from your physical moves. On the other hand, his AI is pretty wonky — he’ll defeat bad guys, sure, but he’ll also walk right up to bombs and punch them, setting them off and dealing an immense amount of damage to everything around him — the two of you included.

Oh, and those baddies that don’t take physical damage? He’ll try to deal physical damage to them before using his light-bullets, so you’ll be sitting there waiting for him to take the correct action for what feels like forever. Definitely frustrating.

The controls are simple on the surface but frustrating after some time — “o” is the main action button, while “x” performs a special move. “△” is to jump, and “□” allows you to rotate between special items, such as healing, power ups, or calling for assistance. It’s all pretty straightforward and probably pretty intuitive for Japanese players (who tend to use the “o” button for their major actions), but for Western players, it’s easy to confuse “x” and “o” in the heat of the moment, draining your special move’s energy bar (it’s FFVII for me all over again).

The other issues I have are fairly minor but add up to a frustrating experience — the save cats appear at random, so if you want to save your game after playing for hours, better hope there’s a cat around; otherwise, you’re out of luck. The main menu is narrated 100% of the time by the Japanese voiceover, meaning you’ll be trying to read something and you hear someone incessantly telling you the same thing repeatedly. At first it was fine, but after an hour it was absolutely aggravating. The storyline probably isn’t that convoluted, but because it’s delivered to players by random NPCs in random intervals in really short bursts, it hardly makes sense. It also doesn’t help that the text is riddled with typos and other grammatical errors. 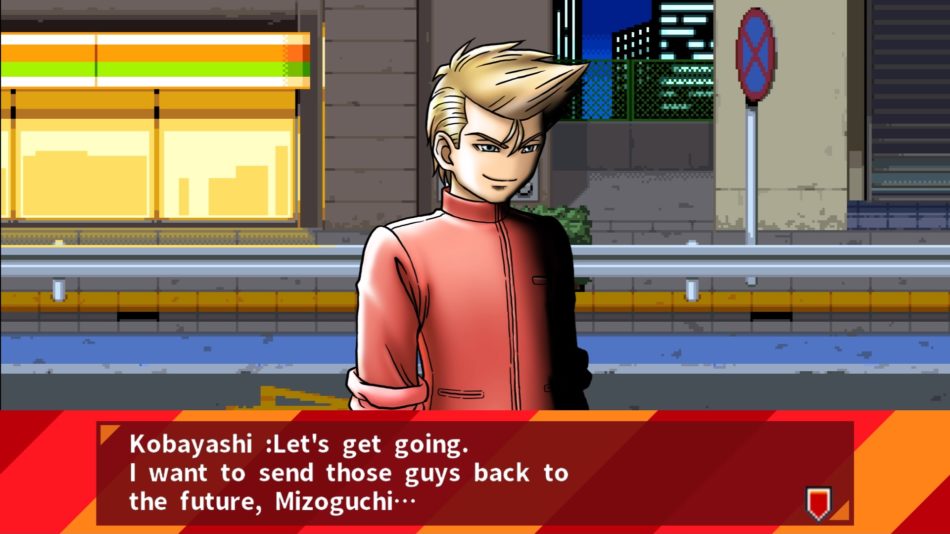 So, are there any good aspects to it?

For one, the sprites are immensely satisfying — from the moves down to the unique facial expressions which are really easy to see and follow along with, the art department deserves plenty of respect for the character design. Additionally, there was a pleasure in being thrown clear across the room — something that would normally be super annoying was kind of delightful, if only because you get THROWN across the room. It’s as if gravity stops working in the moments where Kobayashi gets hit, and it’s one of the small joys in a game full of frustrations.

Perhaps the biggest thing I noticed about Stay Cool, Kobayashi-San!: A River City Ransom Story is just how familiar everything felt. In the past 30 years, the side-scroller genre has seen a lot of tweaks and improvements, but Stay Cool, Kobayashi-San!: A River City Ransom Story decided to really, really, really go back to its roots and forego those improvements. The controls felt just as rigid as NES games of yesteryear did, as if Kobayashi was trying to run underwater. Fighting the bosses ended up being more about timing than mechanic mastery, as a well-timed “x” button pressed repeatedly would ensure a boss would get a beat down and stay down without getting a move in edgewise. 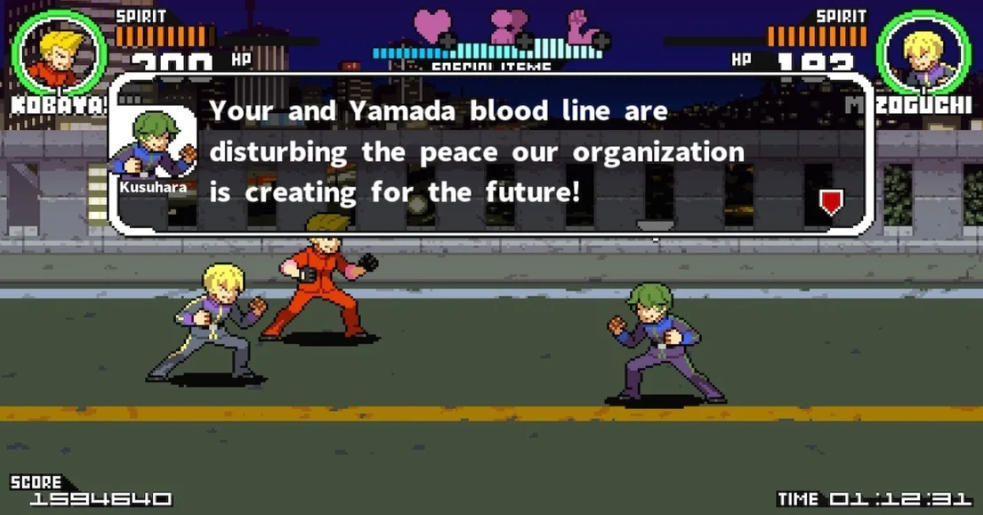 In a way, a lot of the defects are oddly charming somehow; it may be frustrating, and it may not make sense, but it’s honestly the exact kind of game that we put up with in the 80s and 90s. I personally played a ton of Bill and Ted’s Excellent Adventure for the NES thinking it was in a playable state, so my bullshit tolerance is pretty high — it was only after I watched AVGN rip it apart that I realized it was actually a terrible game.

That’s kind of what I got here with Stay Cool, Kobayashi-San!: A River City Ransom Story; knowing the directors made legendary NES classics, suddenly all the pieces fit together — it was as if someone had locked the pair in a vault for 30 years and this is what they emerged with. It’s a game frozen in time, one that may only be suited for retro-gaming fans who know what they’re getting into. After changing my mindset to understand this, Stay Cool, Kobayashi-San!: A River City Ransom Story started to shine, if only a little.

It’s easy to get lost in all the jarring details of the game, but the truth is this: after having a rough day, I popped this in and absolutely zoned out, finally able to relax. In a world where gaming has become overly concerned with collectibles, cinematics, and achievements, it’s nice to play a game that doesn’t expect that much out of you. It may have taken me only two hours and some change to beat the game, but with 20 different endings, it’s meant to be replayed and cherished — just like our old NES games were.

Maybe it’s okay Stay Cool, Kobayashi-San!: A River City Ransom Story will best resonate with retro-gaming fans because, quite frankly, it feels made for an older age group — one that’s okay with rigid controls, nailing timing rather than mechanics, and can stand doing the same repetitive task for hours at a time.

If your first introduction to the Kunio-kun series was River City Girls, I can’t say this game is for you, but if you can speedrun River City Ransom and want an “old-new” challenge, this may just be up your alley.

Full disclosure: This review is based on a PS4 review copy of Stay Cool, Kobayashi-san!: A River City Ransom Story given to HeyPoorPlayer by the publisher

Who’s Gonna Drive Me Home?   Speed was a terrible movie. For those who didn’t live through the 90s and suffer through it, it starred Sandra Bullock, Keanu Reeves,…