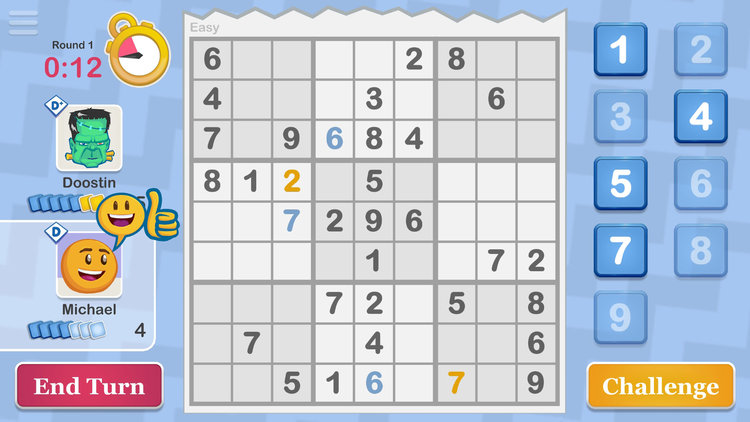 I feel like it’s been a good 10 years since my obsession with all things Sudoku; Sudoku Mania for the DS was notably one of my very first Amazon purchases, and it got to a point where I’d create my own puzzles to solve weeks later after I’d forgotten their layouts. It was such a good time-killer with simple, straightforward rules that I couldn’t see anyone perfecting on greatness.

That is, until Sudoku Scramble.

Developed by 81 Monkeys for iOS and Android, the brain-pleasing puzzler is in the middle of its soft launch (hence why this is a preview and not a review post). It’s definitely solid and in a completely playable state, but the dev team wants to make sure every last detail is ironed out before full release. “We’ve tried really hard to prioritize our player experience,” said director Stephane Cotichini, explaining why the team wants to get everything absolutely perfect.

For those unfamiliar with Sudoku, it’s super easy to learn — the goal is to complete a 9×9 grid with numbers so that each row, column, and each of the nine 3×3 grids that create the larger 9×9 grid has all numbers from 1 to 9 in them without repeating. Sudoku was often found in its pen and paper form, meaning players could take as much time as they wanted to beat each puzzle; with Sudoku Scramble, however, things are a little bit different and quite a bit more thrilling.

Perhaps the most notable difference is that Sudoku Scramble takes a historically single-player game and turns it into a multiplayer experience — players can choose between online multiplayer, couch co-op, or a stage against the machine in this unique twist. Choosing the multiplayer option means a ranking battle, so be sure to bring your A-Game to this numbers challenge!

Once in a game, players will immediately notice the differences between classic Sudoku and this new unique twist; instead of racing against each other to solve Sudoku puzzles side by side, players will solve the same puzzle together with their opponent. The catch? Each player is dealt seven “number cards” at random, and those are the number you’ll be able to play on the field.

It sounds like a simple change, but it turns this brain-teaser completely on its head and forces even the most seasoned Sudoku veterans to change strategies. I had to break the habit of scanning the board for any opening and instead look for specific openings — why would I bother looking for an opportunity to place a number tile that I didn’t even possess? After the initial shakeup, it was a breath of fresh air that delightfully revitalized one of my favorite games.

Each side has only one minute per turn before it switches to the other person, so it’s definitely not the best idea to take your time in Sudoku Scramble. A tip — make sure you’re scanning the board as much as you can during your opponent’s turn to see where you can place your own tiles, and definitely watch where they place theirs on the off-hand chance they’re bluffing, because, if so, you’ll be able to challenge their moves.

What’s a challenge, you ask?

In typical Sudoku puzzles, a commonly-used strategy is to place a number on a grid even though you’re not entirely sure it goes there. You then try to solve the puzzle as if it belonged; if you were right, congrats! You solved the puzzle. If you were wrong, it’ll show later on, and you’ll have to go back, erase it, and start all over again.

In Sudoku Scramble, you can employ the same strategy, but your opponent can call you out on it via challenging. If they’re wrong, they pick up a tile, but if you’re wrong, you’ll collect all your pieces you placed on the board from your last turn with one additional added on. Talk about calling a bluff!

The matches are pretty short (if you know what you’re doing, they should only last for one or two rounds on the easy mode), so you’re bound to rake in the experience points, ranks, and coins pretty quickly. Gaining experience means you’ll unlock new features, such as daily scrambles and monthly goals, ranks will assist in making sure ranked battles are well-matched, and coins allow you to buy avatars (I’m a fan of the space pack myself!).

As it is a free-to-play mobile game, I feel that I have to talk about the ads and micro-transactions offered in Sudoku Scramble. As far as I can tell, the ads appear in major three places — first, as an optional bonus modifier for a chance to double your coins (you can deny); second, as a mandatory watch after each match, and third, as another optional bonus modifier to earn an experience boost. The forced ads didn’t feel intrusive — instead, they were almost like a breather after a timed match where you could put the phone down for a second to chill, so they were fine.

The micro-transactions are also pretty standard, but had noticeably cheaper options than other games in the genre — obviously a free-to-play game has to make money somehow (otherwise how will the devs pay their bills), but just looking at the six possible store options, it’s clear to see that Sudoku Scramble is not a cash-grab, but a genuinely good mobile game. When the dev team said they were trying to prioritize player experience, they weren’t kidding.

I think what I liked best about Sudoku Scramble is that it’s a game you only need to give five or ten minutes to per session. It’s one of those games that, when you get a new phone, is on your list to redownload as soon as possible. It’s an addictive long-haul app that will stand the test of time in a market saturated with throwaway experiences, and, if you’re like me and love Sudoku, it’s going to become one of your main go-tos when you have a few minutes to kill.

Check it out for yourself for free on iOS or Android.