Take a dive into Youshanding. 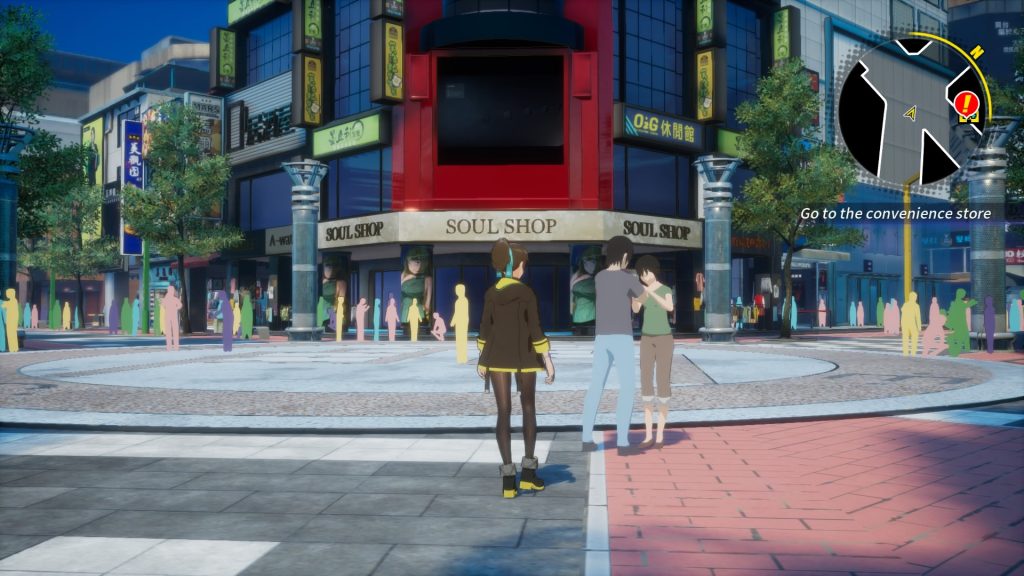 In Ximending, NPCs appear as colorful silhouettes until you get close to them.

It’s always interesting to find games coming from places one doesn’t ordinarily associate with game development. It seems like the majority of games coming out either come from North America, Japan, or occasionally Europe; it’s uncommon to see games like Dusk Diver, coming from Taiwanese developer JFI Games.

Dusk Diver follows Yang Yumo, a high school student living in Taipei. When shopping with her friend Yusha in Taipei’s Ximending district – the city’s rough equivalent to Tokyo’s Shibuya – they find themselves attacked by monsters, having accidentally walked through an interdimensional fissure into a parallel dimension known as Youshanding. Yumo gets severely injured in the attack, but her life is saved by a man named Leo. After rescuing Yumo, Leo finds himself transformed into a miniature stone lion, while Yumo has taken on special powers which she uses to fend off the monsters that attacked her. Leo is a Guardian from the dimension of Kunlun, and he takes Yumo back to meet his boss at the convenience store they use as a base. They recruit Yumo to help them investigate the recent fissures to Youshanding that have been opening in the city, as well as trying to find a way to turn both her and Leo back to normal permanently. 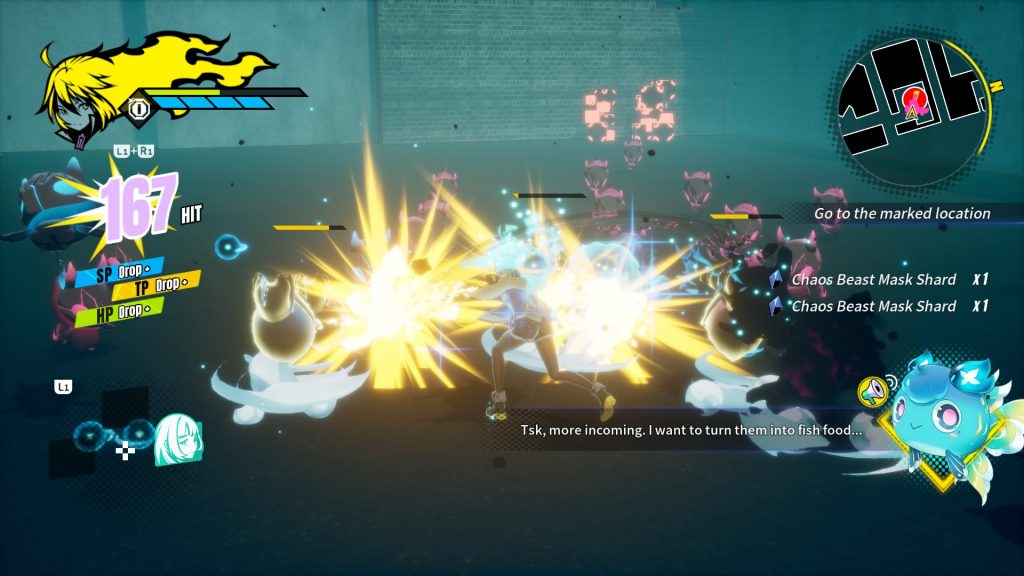 I love beating up legions of enemies while my goldfish trash-talks them.

Dusk Diver is, for the most part, a musou-style game, similar to games such as the Warriors series or Fate/Extella. The main thing distinguishing Dusk Diver is its split gameplay, similar to an RPG, between exploring Ximending and taking on side missions known as “Links,” and delving into Youshanding to advance the story or take on certain missions from your boss. Once you’re in Youshanding, gameplay consists mainly of progressing through the stage and beating up the hordes of enemies the game throws at you. Yumo is the only character you get to directly control, but you also get three Guardians who support you in combat: Leo, Bahet, and Le Viada. Each Guardian’s support attacks have different attributes, such as Leo’s high damage, Bahet’s wide area of effect, and Le Viada’s long-range. Each Guardian can be leveled up by using them in combat and eating at the various places around town, which allows you to complete special missions to unlock new moves. 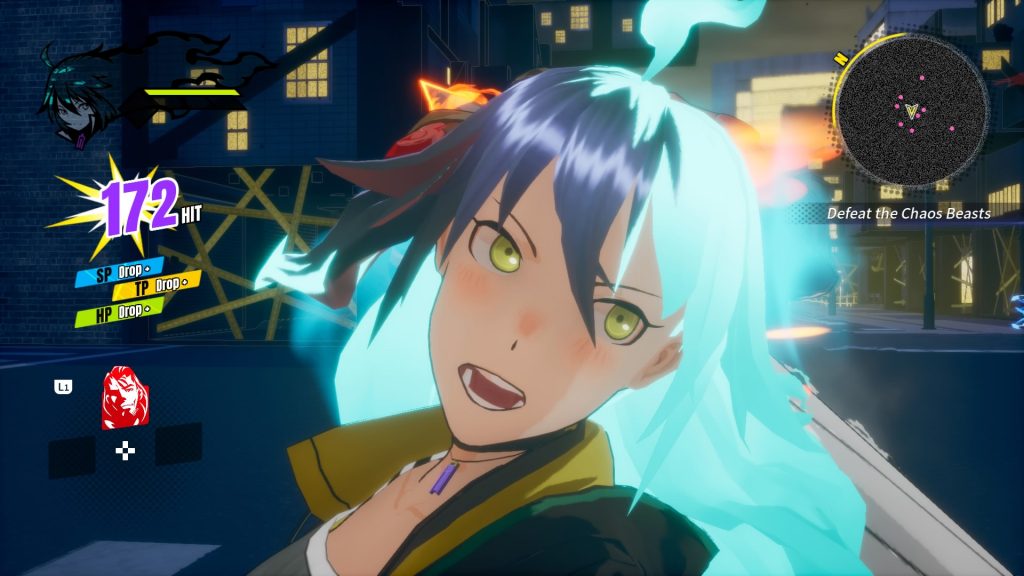 Sometimes you just need to destroy everything in your entire frontal arc.

The combat is straightforward and simple, but generally enjoyable, as is normal for the musou genre. There are light and heavy attacks, as well as Guardian attacks that consume SP. While I found the combat repetitive, it was broken up enough with spending time in Ximending that it didn’t get to me too much, for the most part. SP is gained both by attacking and by defeating enemies, so you gain it incredibly quickly in any normal fight, meaning that spending it is usually trivial for the powerful Guardian attacks. It got more frustrating later on as the game started throwing tougher enemies at me that had more armor since they could attack me and interrupt my combo as I attacked. I wish there were more characters to play as, but the different Guardians provide enough variety for how little time you spend in combat. There are also a handful of particularly ill-conceived platforming stages, which showcase how terrible the slow movement and awkward jumping physics are for trying to jump from one platform to another, without falling into the water and needing to start the stage over from the beginning. The game’s prologue also makes the very strange choice of delivering exposition during combat, which makes it incredibly difficult to read what’s being said while paying attention to the gameplay. 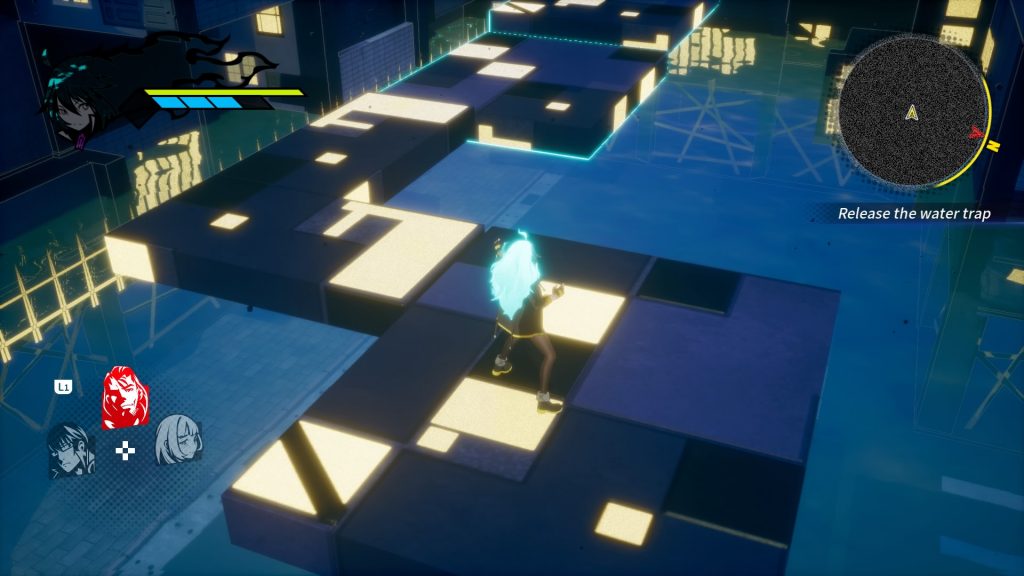 See these platforms? Why did someone think their musou game needed platforming?

Outside of combat, the player is free to explore Ximending. The city has Link missions and collectible Dragon Vein Stone Shards to find. Link missions level up your D-Arms ability, which is a transformation available in combat once you build up enough TP by using Guardian attacks. There’s a variety of places where you can eat to get bonuses in combat, which also level up your Guardians so they can learn new attacks. Ximending itself is enjoyable to explore; the design is bright and colorful, somewhat reminding me of the city design in Tokyo Mirage Sessions #FE, and the amount to find makes it feel worthwhile.

Dusk Diver has a very appealing art style, with the bright colors of Ximending contrasting with the monochrome styles of Youshanding’s various areas. The character designs are great as well, including the Guardian’s Core Forms – Leo as a stone lion, Bahet as a bat, and Le Viada as a blue goldfish. The Chaos Beasts you fight come in a variety of colors to denote strength, with magenta as the weakest, then blue, then green, along with the variety of different shapes and sizes. The major boss designs are also great, mainly being larger and more detailed forms of the chibi Core Forms. 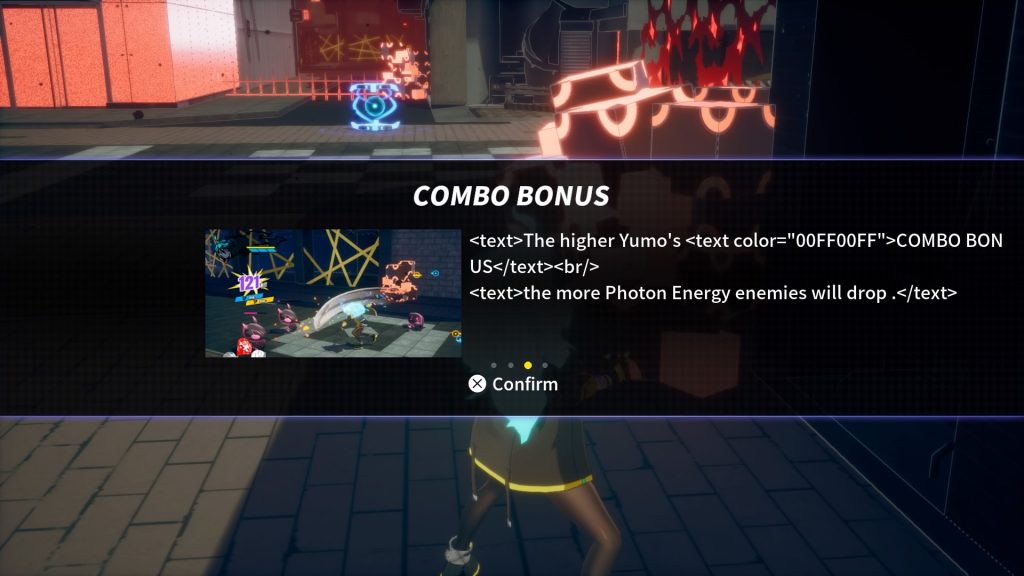 I see… yes, I defintely understand what it’s trying to tell me here.

The game has dual audio, with the choice between Japanese or Chinese voice acting. I mostly played with the Chinese voice acting, which took some getting used to since it’s not something I’ve heard much of in games. Also, since I’m even less familiar with Chinese than I am with Japanese, I’m even worse of a judge of the voice acting quality than I would be for Japanese. The music is fine, but I found that a lot of it had strangely short loops, meaning some of the tracks got repetitive quickly.

The biggest issue I ran into while playing was the sheer number of typos and other text errors. Nearly every conversation has at least a few problems, whether they be misspelled words, incorrect capitalization, missing or incorrect grammar, text wrapping issues, or (in a few tutorial boxes) visible HTML tags. The game frequently used midline ellipses (⋯) – which is not a form of punctuation generally used in English – interchangeably with regular ellipses (…). It just looks shoddy to see so many errors, especially when combined with things that should be changed but may not technically be wrong, such as awkward phrasing or missing commas. The game didn’t have much in the way of glitches, but I did find that while fighting certain large enemies, their movement could cause Yumo to erratically jump around the area if she’s close, which can throw you off if you’re trying to focus down a specific enemy to break its armor.

Dusk Diver does a decent job of mixing the musou and RPG genres. The exploration of Ximending and everything to do there effectively breaks up what would otherwise be fairly monotonous gameplay. There’s a lot to do in Ximending, and all of it provides some kind of benefit, no matter how slight it may be, so even just exploring feels like it’s worth your time. The combat feels good as well, although some enemies that you face later on in the game can be incredibly frustrating to fight, and the platforming stages show that musou games’ controls are too imprecise to ever use for platforming. It tells a fairly good story through all the grammatical errors, and all the characters are well-designed and appealing. Unfortunately, there’s no way to check how long I played on PS4, but I’m pretty sure it fell somewhere between 15 and 20 hours. If you’re a fan of the genre, or if the design and premise sound appealing to you, you’ll probably enjoy Dusk Diver.

Full Disclosure: This review is based on a PS4 review copy of Dusk Diver given to Hey Poor Player by the publisher. 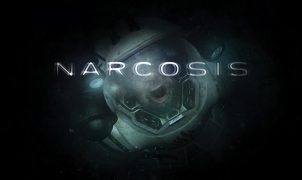