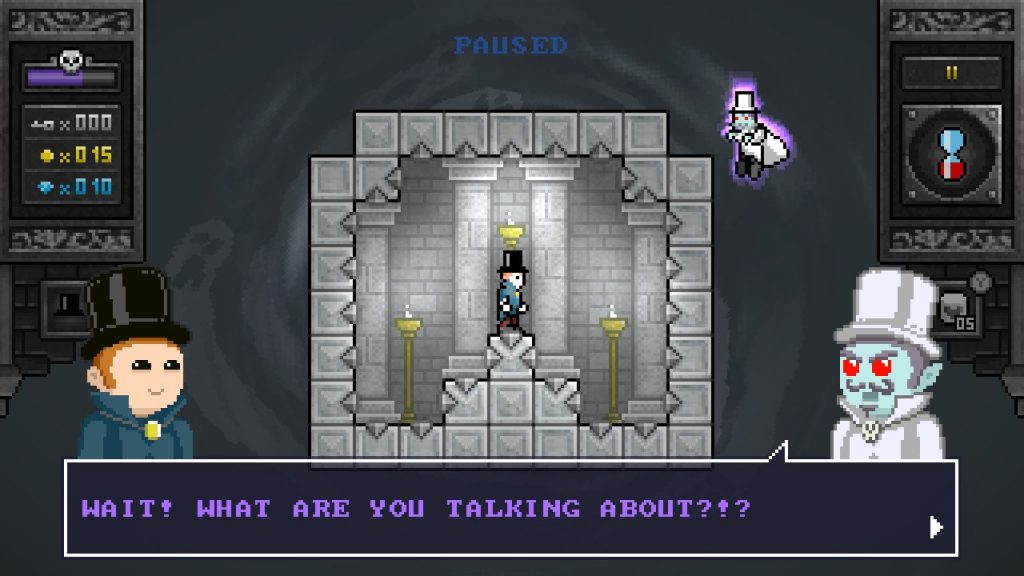 I feel like you all should know that Killer Chambers is the game that brought me back from review retirement.

Two years after my last review, I was approached by Village Bench on Twitter to give Killer Chambers a go — because, as it turns out, someone is impersonating me online to get free keys from unsuspecting devs (it’s a whole thing you guys).

But I digress; the devs were nice and the game looked awesome. It was altogether too tempting — I had to give this glorious slice of bullet-hell a go.

The premise of action-platform/puzzle Killer Chambers is simple: you take on the role of Brave Lord, who was juuuust about to enjoy a delicious high-calorie feast in the comforts of his own home, when, wouldn’t you know it, a peasant burst into his dining room and announced that the realm had been taken over and the crown overthrown. Naturally, it’s up to him to save the world, because of course it is, so he sets off to the castle to see what’s up.

As it turns out, a ghost by the name of Lord Grave has claimed the castle for himself, and he’s finding a lot of amusement in all the would-be heroes sneaking into the cellar, setting off all the booby-traps, and dying immediately.

That is, of course, until Brave Lord shows up. 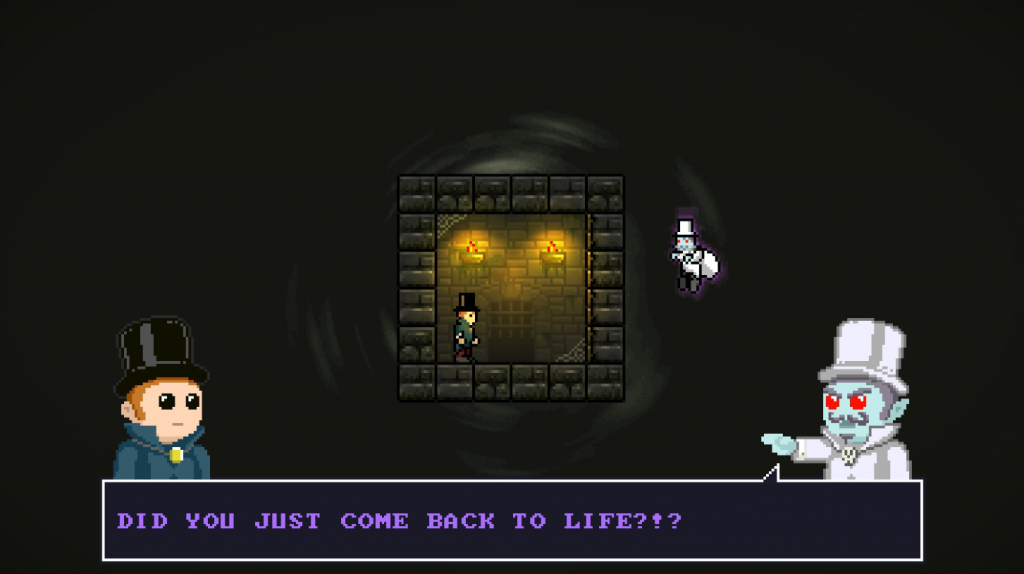 It appears Brave Lord is more or less invincible, as he is able to come back to life after death. This comes in handy, since there’s an awful lot of dying in Killer Chambers. Suspiciously, Lord Grave informs Brave Lord that jumping (z button), crouching (down button), and hopping like a bunny (z + down button) will allow him to bypass the arrow traps until the time runs out, after which point the traps cease and the room yields a key to unlock a door to the next chamber.

You get the idea.

But that’s the only way to play — in order to complete the chamber and move onto the next, you have to memorize each trap pattern and jump or crouch accordingly. Luckily, a lot of the trap patterns are fixed and fairly symmetrical to begin with, meaning you can anticipate “sets” of trap patterns, but once the next set falls, you’re probably going to die. It’s this process of pattern memorization that inches you closer to the finish line, death by agonizing death, until that sweet, sweet key drops and you’re free to leave. 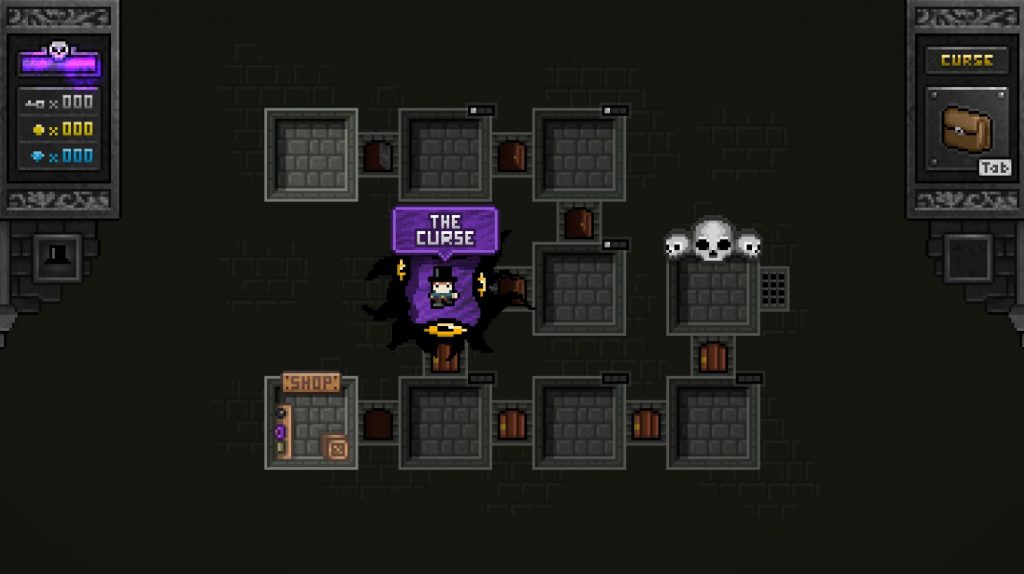 Of course, there is such a thing as dying too often — Lord Grave, who feels Brave Lord’s ability to come back to life is a total killjoy, has placed a curse meter upon him, which slowly fills up every time he dies. Once it reaches full power, Brave Lord is trapped in the chamber with no way to move (forwards or backwards) until the cursed chamber has been completed.

While Brave Lord hates the cursed chambers because the otherworldly eyes freak him out and drive him slowly insane, players will hate them because they not only interrupt the (albeit failing) flow and memorization of the regular chamber but step it up in terms of difficulty. It’s a whole new pattern to learn with much more intense ammunition, and you’re not going anywhere until you beat it. 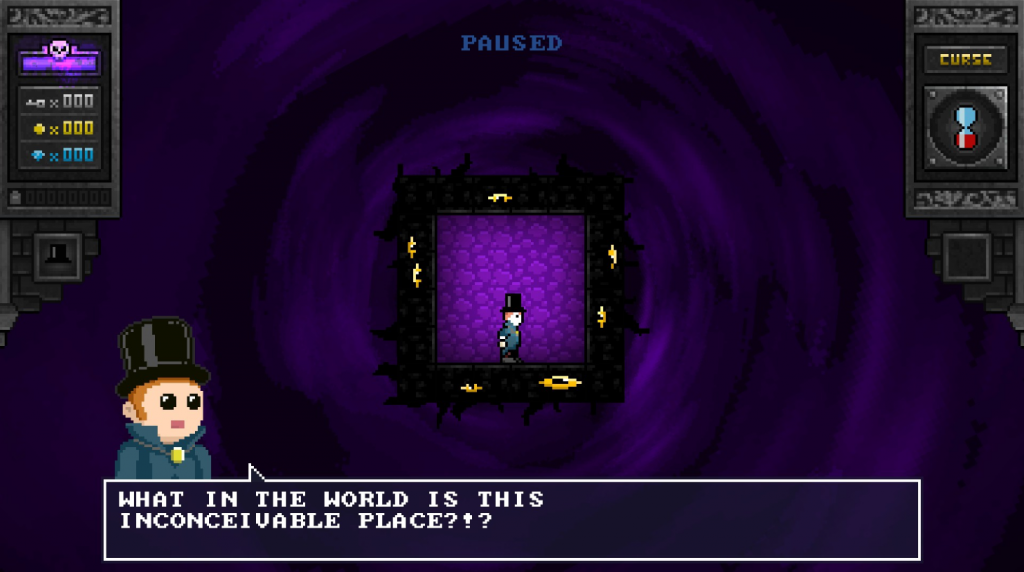 In between chambers, there’s delightful banter between Brave Lord and Lord Grave, who honestly act more like well-acquainted, goofy old rivals straight from an asdf movie than your standard hero and villain. The lighthearted writing would normally feel out of place for a game about literal rooms of endless death, but it honestly works really well here — in fact, it’s necessary. Without a few well-deserved laughs dotting the actual hellscape that are these chambers, I’m not sure I would have held on for as long as I did.

I think the thing Killer Chambers executed best was capturing the true essence of just how hard retro-style games actually felt — and, more specifically, how I reacted to them. As a kid, I played Donkey Kong 64 until my hands practically bled, and that already extremely difficult game requires you to beat the original Donkey Kong in order to totally complete it (amongst many, many other things). For a 9 year old, it was pretty brutal, and I found myself throwing down my controller and walking away for several minutes, only to come right back and try again. Think “Rage Breather” instead of a full-on “Rage Quit”. 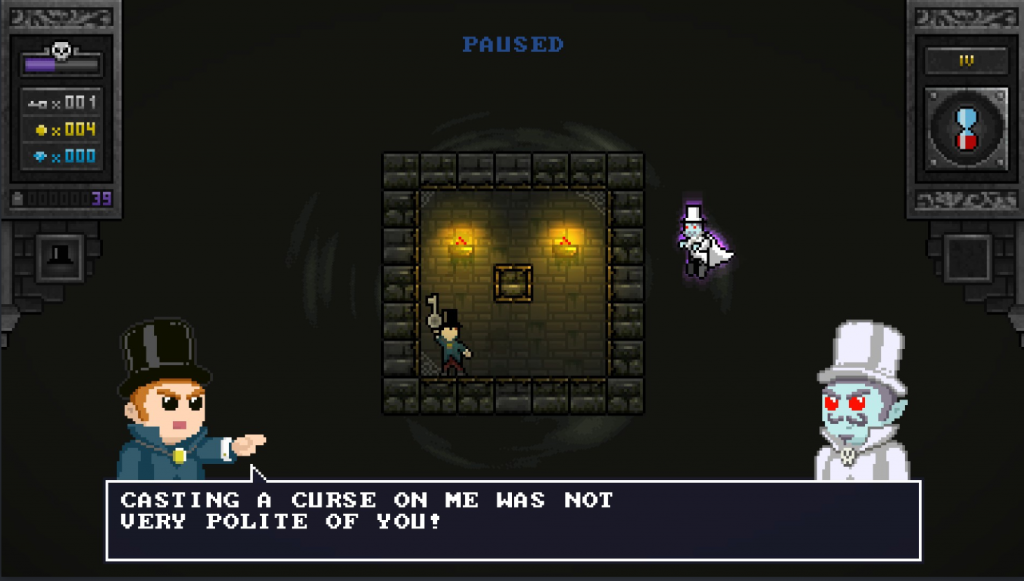 This is exactly what I ended up doing with Killer Chambers. I might die 40 or 50 times in one room, swearing profusely each time, until I reached my limit and had to exit out of the game. This would be followed by me booting up the game after a few minutes, only to repeat the process over and over again. It was like Sega’s Lion King reborn, except this time I couldn’t hand the controller over to my older, more seasoned cousins during the stampede level. I was on my own in the most nostalgically frustrating experience I’ve had… ever?

Yet, it’s this obscene difficulty that makes Killer Chambers so unique. Where Dark Souls was certainly unforgiving, it also felt fresh — maybe due to the graphics, the setting, or character design, there was something to make it feel like, despite its difficulty, you could manipulate the game somehow, either through skill or strategy, and “git gud” enough to beat it. 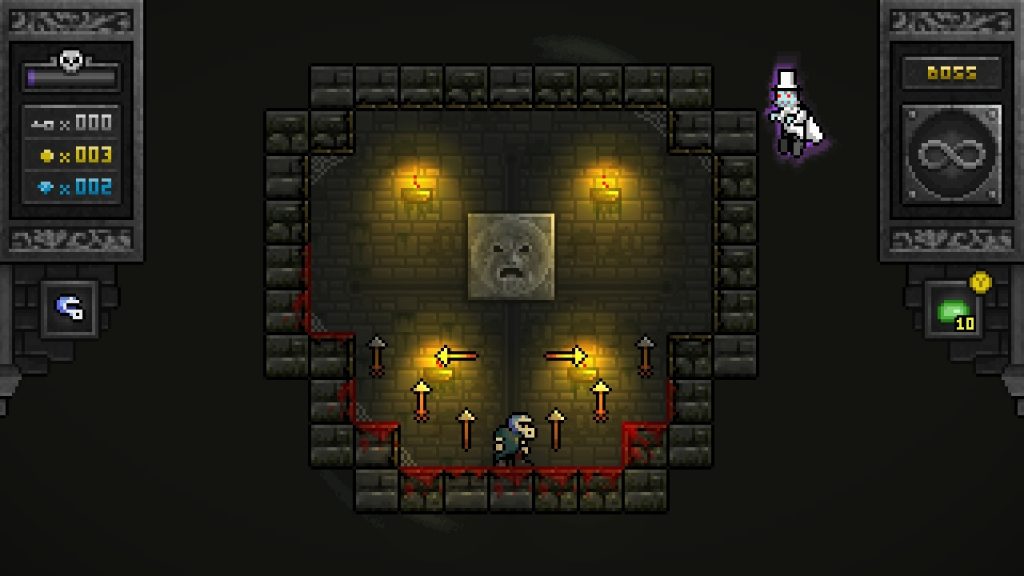 Compare this to Killer Chambers, which would be right at home on a Sega Genesis or SNES — it isn’t an homage to 90s gaming, it firmly *belongs* with other 90s games. If you told me this was pulled from a vault somewhere and was truthfully released in 1994, I’d believe you. It’s managed to capture something I thought long-since gone in retro-refreshers, and that’s basic character design (guy in a hat), frustratingly-simple-yet-impossible controls, and unending punishment to the point of tears.

I mean all that in a good way. 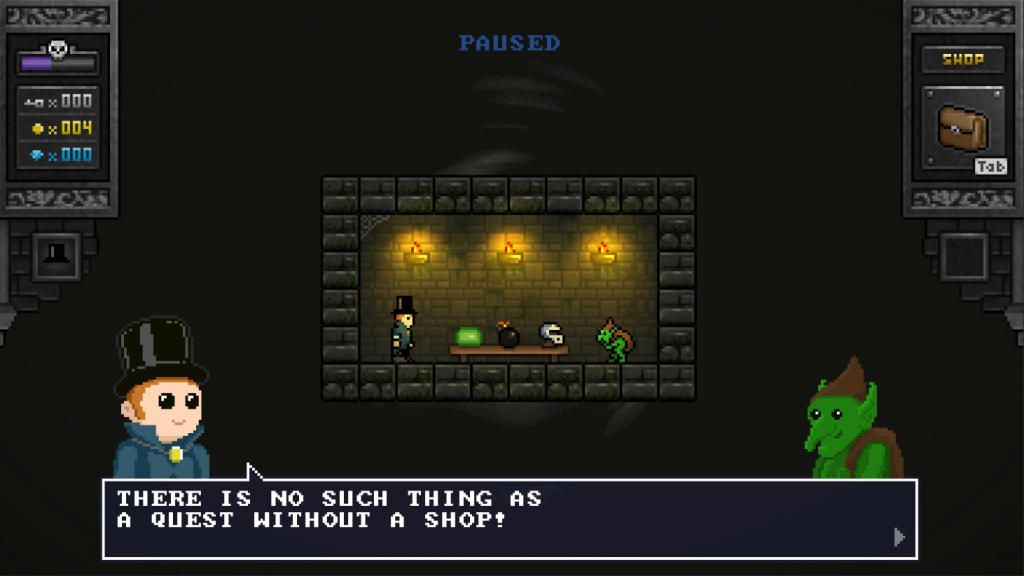 Of course, there’s more than just nostalgia in this title — the quaint music is, most importantly, not distracting, and the graphics are so charming. There’s also more to each room than just jumping, as players have the option to spend hard-earned coins on items that can make life easier, such as bombs and hats. There are 12 hats in the game all with their own unique ability, such as invincibility from one hit before disappearing, that feel less like your average armor and more like the devs throwing us a bone to help us out.

In all honesty, I only have one real complaint, and it’s pitifully slight — there’s no true pause button. Sure, you can hit escape and it’ll bring you to the menu, but the traps still go off in the background, meaning it’s a guaranteed death. It didn’t matter to me personally (throw another death on the pile, idgaf), but I can see this being frustrating for people trying to complete a run with as few deaths as possible.

Normally, I’d say Killer Chambers isn’t for everyone for the sake of its difficulty possibly turning off some players, but at the insanely cheap price of $4.99, it honestly is. As long as you don’t have high blood pressure, there’s no reason why Killer Chambers shouldn’t be in your Steam library.

Editor’s note: This review is based on a retail copy of Killer Bench given to HeyPoorPlayer by the publisher. 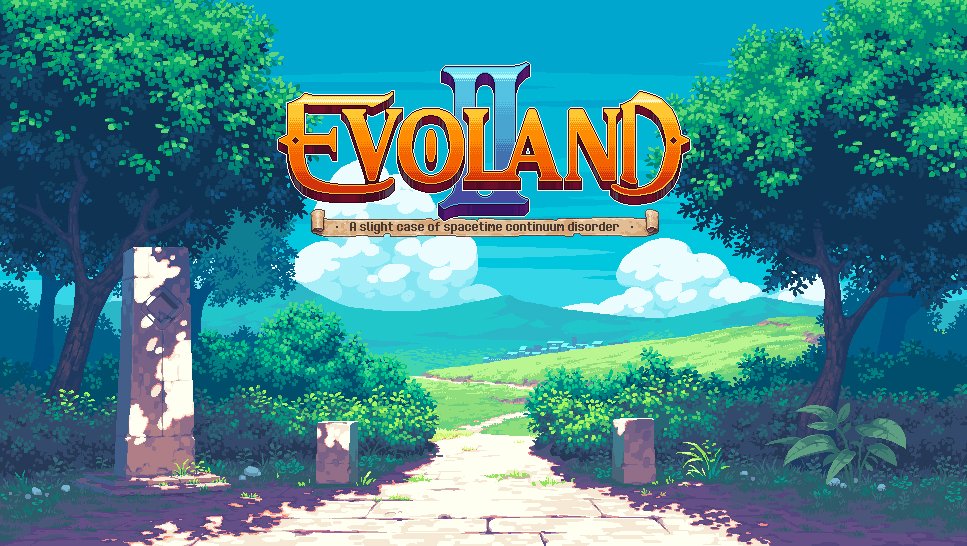