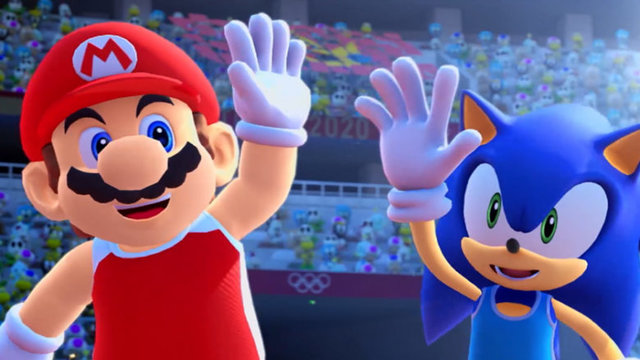 My Tokyo Olympic adventures over the past month have proven quite vindicating: I’ve jumped hurdles with Yoshi, rode horses with Knuckles, tackled Mario and Sonic in rugby matches, and yes, played table tennis with Shadow the Hedgehog. It is one thing, perhaps, to juxtapose the immaculate perfection of a shirtless Dr. Eggman with that of a nipple-less Wario, but it is here in this fast-paced game of ping pong that the id of Mario and Sonic at the Olympic Games Tokyo 2020 lays bare. Here I am, paddling balls back and forth against, depending on who you ask, the most emblematic embodiment of Sonic‘s fall from grace — be it disillusioned veterans who simply felt Sonic Adventure wasn’t their thing or SEGA’s pitiful lapse of judgement in adorning him with  firearms and foul language — and in what I’m sure diehard experts of Sonic lore assert is a massive betrayal to Shadow’s detached apathy (a staple, I’m sure, in what’s already inane lore), said moody hedgehog’s left snarling and pouting as I snatch victory after victory.

And yet, I’m left grinning the entire time — in an era where SEGA is, once again, unable to properly steer Sonic‘s direction, I may as well take that as a win. Mario and Sonic at the Olympic Games Tokyo 2020 comes as a delightful surprise; as elaborated in my preview, my chilly reception to a previous iteration had me dismissing the series as nothing more than frivolous, wasted potential — after all, why bother with clunky sports-themed crossovers between Nintendo and SEGA’s biggest mascots when the potential for an ambitious platforming crossover was lying right there? Now, older, wiser, and more open to cynical whimsy, my journalist responsibilities urged me to take on Tokyo 2020 for a second chance, and I’m glad I did, for this new iteration survives the initial shock of “wait, I can have Princess Peach beat up Tails in karate?” and sustains itself with a solid selection of sub-games.

BOW DOWN TO YOUR 100M DASH OVERLORDS. 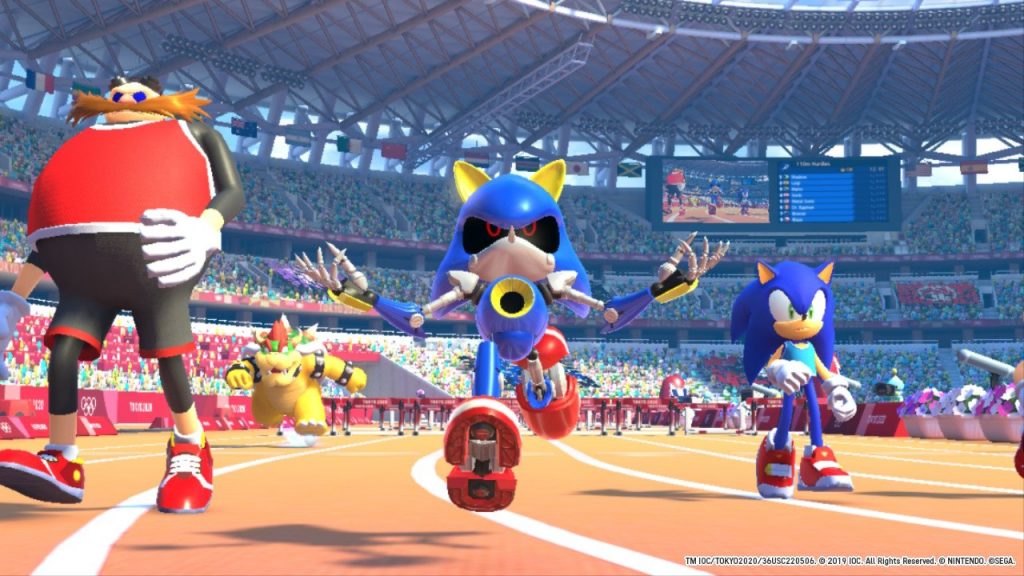 Not that Tokyo 2020 doesn’t have ambition to spare, mind — there’s the big, campy story mode and games split between modern 3D graphics and nostalgic 2D sprites — but I’ve found it best enjoyed leisurely. As mentioned before, despite the athletic theme Tokyo 2020 doesn’t emphasize the same physicality found in, say, Mario Kart , let alone echo its respective source materials; yes, we have vigorous events in Skateboarding and Surfing, yet their accompaniment alongside button-timed play in Gymnastics and Triple Jump offers a compelling balance. We could, perhaps, scoff at how simple the 10-second 100m dash is, but conversely, “easy-to-learn yet hard-to-master” affairs in Javelin Throw and 4 x 100m Relay perfectly fit casual play of 10-15 minute bursts. Simple as their button prompts may be, I treated them as essential cool-downs from more intensive events — a process aided by gradual, enticing experimentation with character stats and difficulty options.

Of course, the flashier events are the star of the Tokyo show — from Surfing’s careful balance to fast and furious Boxing, there’s plenty for aspiring athletes to engage and master. While it’s worth noting most of these only operate within one arena, there’s enough variation in solo affairs and team play for us to cull favorites; for instance, I soon lost interest in Equestrian races thanks to stiff controls, yet the meticulous challenge of Sport Climbing — a stamina-dependent affair revolving around careful, split-second deliberation — rendered it a frequent contest in my daily rotation. Meanwhile, Vs. matches employ intense one-on-one or team match-ups — all are handily accessible, as one not needs to memorize, say, every last Boxing technique to go to town on Yoshi as Metal Sonic, so punch away!

Who’s ready for a Tokyo party?

Dream Events — matches inspired by Mario/Sonic locales — also return, although some may be disappointed Tokyo 2020 whittled the number down to three. (In fact, Dream Shooting doesn’t reference any specific game, although its classic Japanese castles to accompany the Tokyo theme.) Regardless, I imagine Super Mario Odyssey‘s Dream Karate will be the runaway favorite — operating on an illuminated board on the grounds of Peach’s Castle, four combatants frenziedly smack each other around in a mad dash to flip over the most tiles. With series-themed power-ups littering the battlefield as contestants flounder about, it’s a rousing 3D arena brawler channeling Smash Bros.-esque chaos. Even so, while the other two in Dream Racing and Dream Shooting are mildly entertaining, that we’re only limited to referencing limited to modern entries is a missed opportunity. (In fact, Dream Shooting doesn’t actually reference anything, although its classic Japanese castle setpiece is a clever homage to the Tokyo theme.)

Still, the modern Tokyo 2020 games offer a veritable smorgasbord of entertainment — a feat I can’t claim’s applied to the retro Tokyo 1966 games: bite-sized events utilizing Super Mario Bros. and Sonic the Hedgehog/3 and Knuckles sprites. While charming, the novelty wears off relatively quickly, as most of the events are those incremental 10-second affairs — Marathon and Volleyball are the only ones with any real meat on them, and even then, the latter’s too slow and clunky to capture our attention for long. They operate fine in tandem between 2020’s intensive workouts, mind, but while I certainly understand the logic behind the reduced cast (remind me again the last 2D game’s Waluigi starred in?), I only wish we had more thorough events in the vein of Rugby or Sports Climbing. 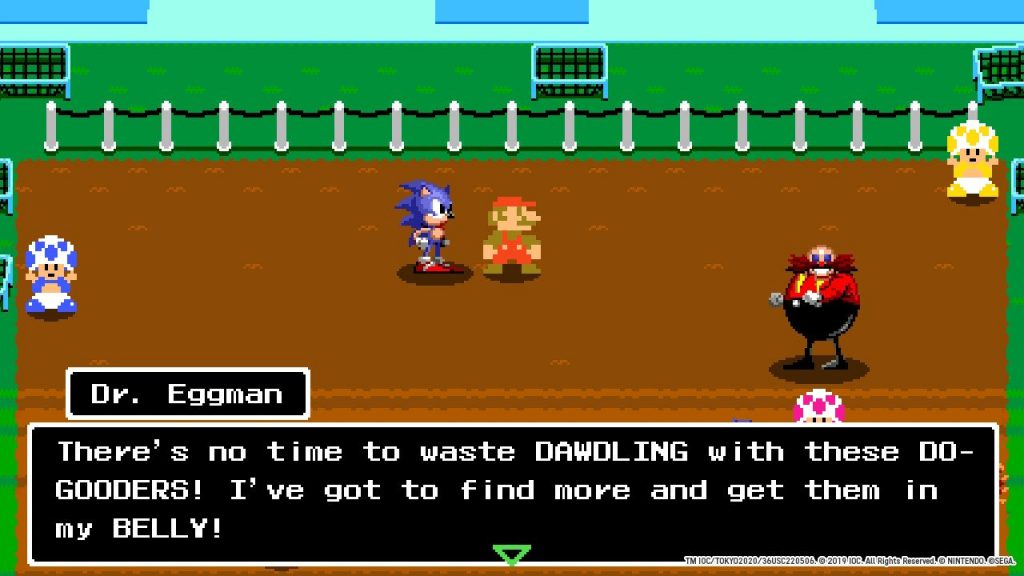 Thankfully, that’s where Story Mode saves the day; I mean, what’s a better excuse for a tongue-in-cheek adventure dividing modern and 2D play than, say, Mario and Sonic sucked into a game console of Dr. Eggman’s devising that forces our heroes to compete in the 1966’s Olympics against their eternal rivals? Okay, it’s a level of absurdity that’d fit right in with the cheesy Super Mario Bros. Super Show or the Adventure of Sonic the Hedgehog cartoons, but be it edutainment in Tokyo Olympic fun-facts or Mario and Sonic chasing down divine sushi rolls, it’s genuinely fun cheese thanks to lively banter and exaggerated sprite-animation. (As observed above) Naturally, such adventures are complemented by original games divorced from the actual Olympics — all play robustly, are available outside the Story Mode, and, most importantly, offer a more symmetric selection of Modern and Retro events (Museum Sneak, a subversive take on Mario‘s overt platforming, being a personal favorite.) I suspect it’ll be a humbling introduction for newcomers, particularly those wistful for their halcyon retro gaming days.

Even so, for all my enjoyment, I can’t help but worry if long-time fans might find all this a little too familiar; yes, there’s plenty else to keep us occupied in Challenge achievements the series’ first-ever online play (alas, I’m still unable to comment on the latter, as not even the game’s prior Japanese release unearthed any opponents, but I imagine fans will have fun competing in Ranked Match), but while the game supplements certain matches with “guests” such as Rosalina and Rouge the Bat, the main roster remains nothing new. (An issue, I understand, that has pervaded previous entries) Meanwhile, in a move I’m certain will bum out gaming audiophiles, I’m saddened to report I encountered very little of the series’ famed remixes. This is not to minimize the terrific original blend of orchestral and chiptune songs accompanying the various sub-games, but with how highly-regarded SEGA’s sound efforts have been for this series, that there’s not so much as a proper Sound Test is a definite head-scratcher.

And yet, how ironic what initially drew me to Mario and Sonic at the Olympic Games — that being said remixes — wasn’t necessary to captivate me. Veterans might find themselves burnt out despite the main attraction in Story Mode, but for latecomers like me, it’s an attractive entry point designed with love and appropriate replay value. If SEGA’s output here is evident of future Olympic Games endeavors, you can count me in as a willing participant — especially if it cranks up the surreal weirdness. 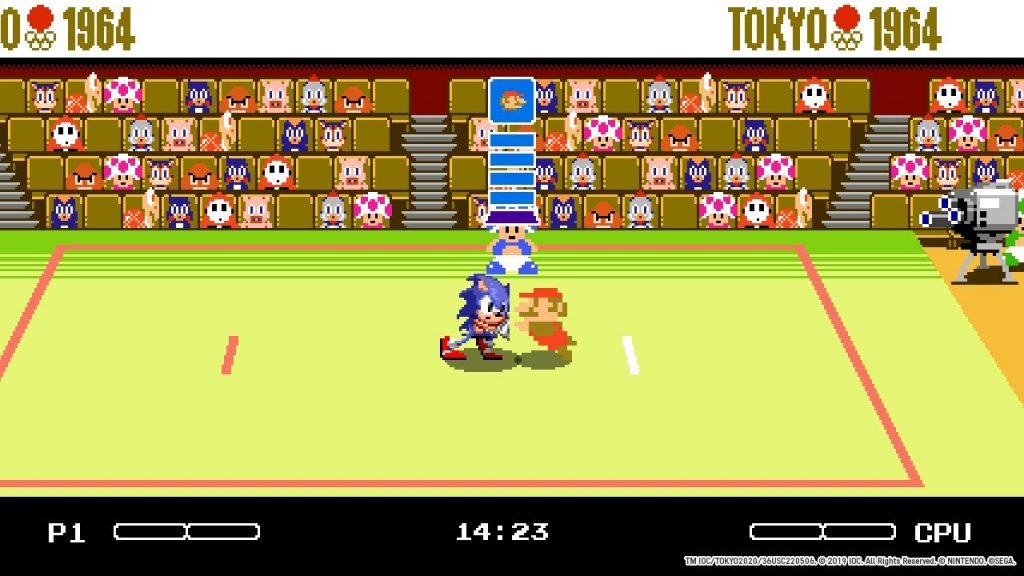 (Oh, and in case you’re wondering: in a complete coincidence, Amy Rose beat up Bowser Jr. in a boxing revenge match. Life is good.)

Full disclosure: This review is based on a review copy of Mario and Sonic at the Olympic Games Tokyo 2020 provided by SEGA. 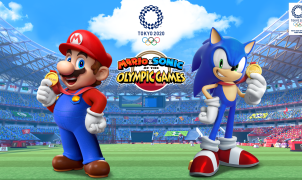 Mario and Sonic at the Olympic Games Tokyo 2020 Preview