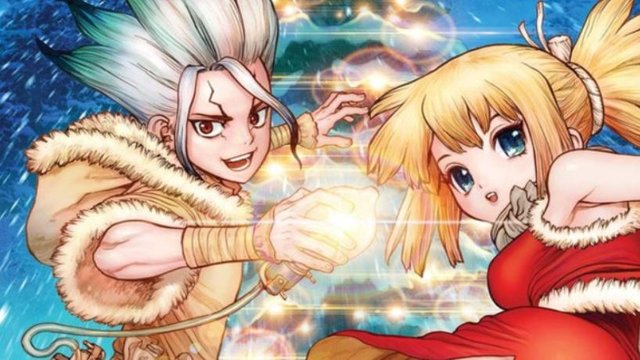 What a time to be a Dr. Stone fan — the manga’s still going strong at over a hundred chapters, the anime adaption’s one of the most popular and critically-acclaimed debuts this year, and even creators Riichiro Inagaki and Boichi are dropping by AnimeNYC to discuss their beloved manga. (Which yours truly is planning to witness and document!) Such a turnaround from its rocky beginnings, no? And here we are with Volume 7 — enduring proof of how it’s one of Jump’s finest ongoing series, what with the concoction of terrifically fun characters engaging, grappling, and deciphering science.

To the edutainment-averse, the concept of gelling “fun” with potentially condescending edutainment to be blasphemy, but I’ve yet to deduce how else Volume 7 overcomes the dreaded Shonen build-up by being just that. Barring the very end, Senku and co. are merely laying down the prep-work for the upcoming Stone War against Tsukasa; in any other manga, we’d be subject to padded training arcs and mopey (if not well-intentioned) melodrama, yet Senku’s lanky physicality and borderline-allergy to gooey sentimentality leaves him ill-equipped for such formalities. Hence why nine chapters of distilled Dr. Stone may be just what the, uh, doctor ordered: the cast’s manic, infectious passion’s been the series’ pulse since Senku arrived in Ishigami Village all those volumes back, and be it crafting rudimentary cell phones to hunting down rare minerals, we share their delight in discovering something as ordinary as a brick stove.

Not that any of this would be mundane otherwise; why, merely observe the spelunking adventure with Senku, Chrome, and gasp, Magma — the murderous lout our heroes barely toppled in the Grand Bout. Dr. Stone wasn’t just about to let our former antagonist stew and grumble at Senku stealing his beloved Chief’s sea, and in the series’ trend of representing our villagers as rejections of Tsukasa’s ideal world, Magma represents a more negative conception: just as how there always will be those who strive to advance society for others’ benefit (Chrome, who tinkered throughout his whole life to save Ruri), Magma’s a more cynical, familiar example of those who exploit progress for their sole benefit; after all, having bossed around an isolated village his whole life, what’s the point of de-petrifying some stupid statutes when he could’ve been Ishigami’s top dog? While there’s a happy ending, their eventual truce’s further reflects this via a selfish condition on Magma’s end — whether he’ll redeem himself remains to be seen, but it’s certainly worth observing how this muscle-head’ll fit into Senku’s humanity-saving aspirations.

So, what’s going with Kohaku’s proportions there? 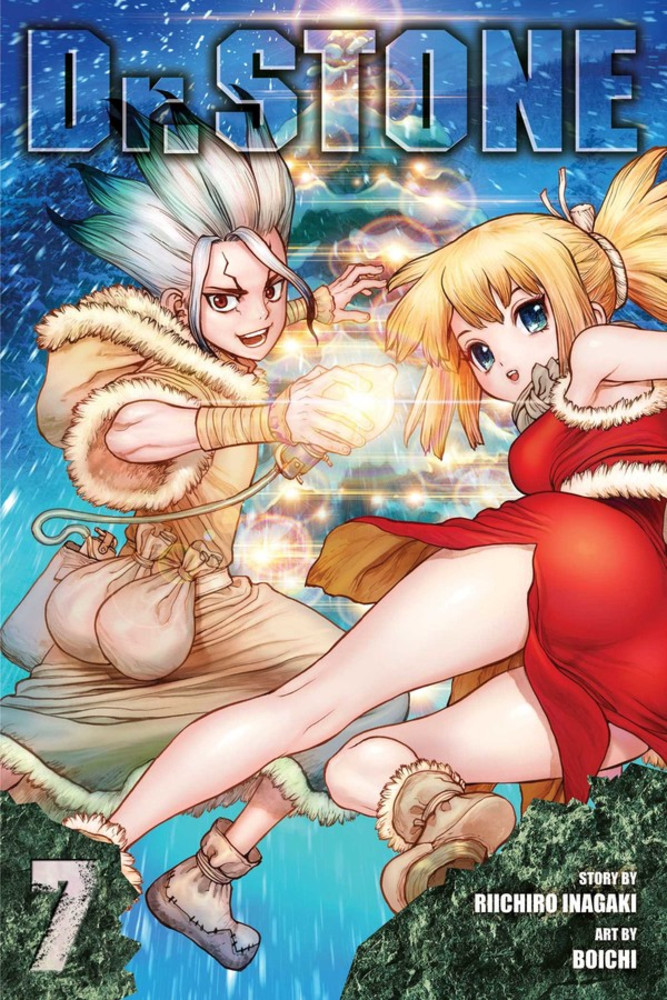 Point is, while Senku and Magma may shudder at Chrome’s sappy idealism (“I think that the bond the three of us pals formed down in this treasure dungeon is the greatest prize of all!), the camaraderie that’s built up over these past seven volumes is what renders Dr. Stone‘s edutainment so humbling. Much as I could elaborate upon old Kaseki’s like-minded interests in his old age, I live for those moments where we confirm that, yes there is a beating heart in the stone-cold busybody that is Senku — much as he tries to play off the gang’s birthday gift as rationality, Boichi’s palpable depiction of a starstruck Senku says otherwise. It’s this heartwarming solidarity that’s enough to make even a stone-age Christmas Tree feel like an satisfactory chapter closer; as far as science is considered, it’s just a test for the gang’s lightbulbs, but Senku’s wistful countenance (and, naturally, his ensuing lie) says it all: he’s unearthed yet another long-lost staple of human culture to share among new friends.

Not that the series plans on resting on its laurels forever — the last couple chapters shift the gears forward not just into our inevitable reunion with Taiju and Yuzuriha (remember them?), but into the upcoming feud over the Revival Fluid. With Tsukasa’s sentry in Homura carefully observing Ishigami’s movements, it’ll take more than wits and brainpower to subdue her…or will it? How Dr. Stone will maintain its edutainment brand throughout battle remains unknown, but we have nothing to fear — our concerns in genre shifts or cast upheavals have long since subsided, having cemented itself as a confident breed of Shonen manga.

I mentioned the stove scene earlier — when Senku affirms Kokuyo’s evaluation of science (“Little by little, the village is becoming a better place to live.”), it’s here Dr. Stone‘s juxtaposition of two worlds finally congeals — an ordinary household appliance staving off a life-or-death winter for curious primitives. Can science not only bring back Goku, but utilize Dragon Ball in the same vein as Lillian Weinberg’s soul-stirring vocals? Maybe, maybe not, but the ever-jubilant, ever-relevant microcosm that is Ishigami Village renders Dr. Stone‘s edutainment the real deal.