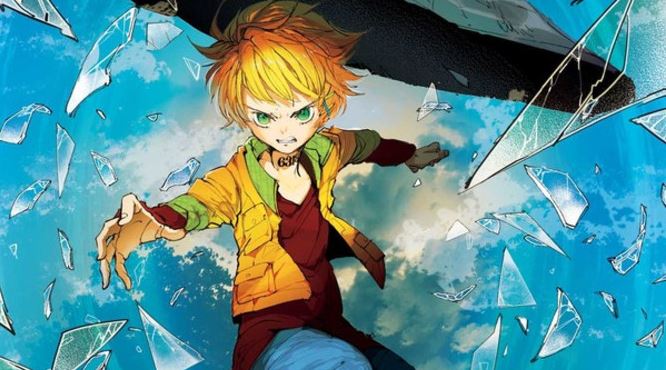 With Volume 11 closing the book on The Promised Neverland‘s bloodiest chapter — that being Goldy Pond’s terrifying hunting grounds — it only stands to reason the series’s momentary transition into a suspense/battle hybrid enthralls to the very end. Thanks to the impeccable teamwork of writer Kaiu Shirai and artist Posuka Demizu, this shift looks as easy as breathing, and it’s all thanks to tying into one, heartbreaking theme: the bitter struggle to end the demons’ child-eating reign. Up ’till now, Emma and co. relied on genius brainpower to outwit both human and demon alike, but now backed into the literal fight of their lives, they’re forced to evoke pure, unadulterated grit.

Volume 11 boils this directive down to one insurmountable threat: Leuvis. The other demons were hardly pushovers, but true to Lucas’s warnings, this thousand-year veteran of human bloodshed’s unlike anything our heroes have tackled before. Having since dispensed with the morals behind his hunting, the thrill from Mister and Ray’s deadly sneak attack awakens what he’s been striving for a millennia: the thrill of the hunt. His seed-sowing of sparing children has born fruit for this very moment, and so the strides his prey steadily accomplish in their fight — be it flash bombs or recognizing his aging limits — are met only with excitement on his part. Fearing only boredom, the prospect of death only encourages this bloodthirsty aristocrat to throw his life on the line.

Not that any human-devouring demon — let alone Promised Neverland fans — would be bored by the action here. With quick thinking on top of sudden arrivals, the efforts of Emma, Ray, and the others drive the strongest demon hitherto into a corner, albeit not for long. As a hail-fire of bullets rains down the streets and claws rip through human flesh, The Promised Neverland turns the oft-criticized Shonen staple in “I’m going to explain/think every action I take in slow motion” on its head and situates it side-by-side with the series’s trademark tension. None of this comes at the expense of our heroes’ agency — our usual pessimists frantically desire to escape, yet this time Emma’s idealism — typically running on convincing optimism bordering on naivete — reins them in with logic they can’t argue against. (That being, of course, they have no hope escaping from a demon who, even blinded and stunned, still possesses inhuman reflexes.)

I envy volume readers — you get to read this all at once! 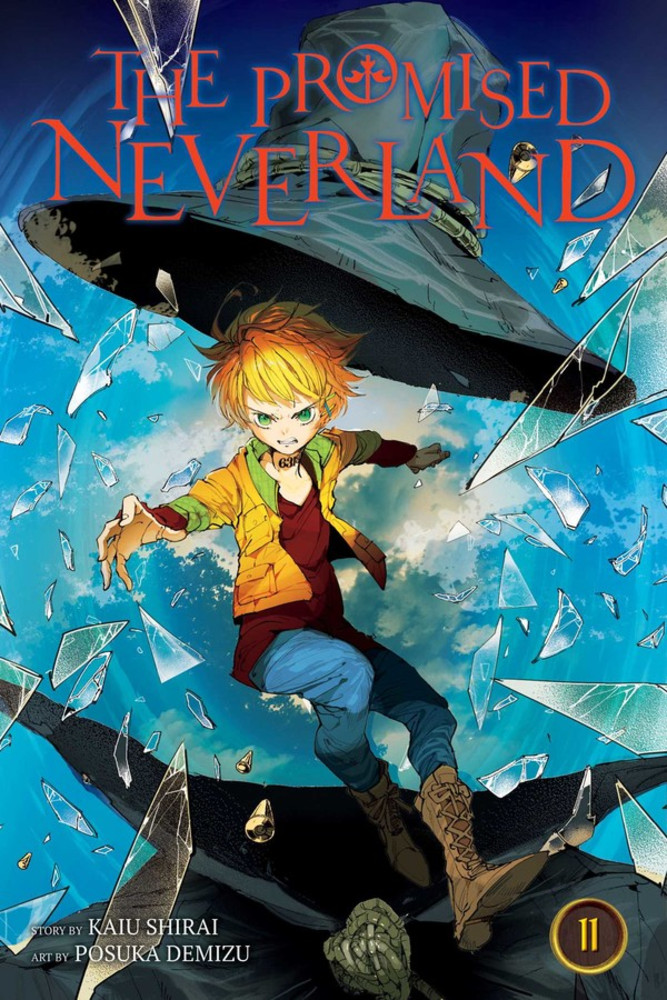 All of this makes for an gripping page-turner, mind, but it’s here I think back to the volume’s respective serialization in Jump — not that Promised Neverland didn’t dangle nail-biting occasions prior, yet with death hanging over our protagonists closer than ever, reading the weekly chapters here was simply unbearable. That this suspense’s rebounded by validative pay-offs makes for some of the series’ best suspense — the bombshell arrival of the arc’s most mysterious character will make any reader holler in joy, but that the battle’s capped off by Emma’s near-death introspection — running on nothing more than will-powered adrenaline — is nothing less than sublime. Again, it’s here I need to praise Posuka’s artwork — that we only witness Leuvis’s prowess rather than an entourage of demons means we don’t witness her typical flair for creativity, but that’s where her prowess for reaction shots, perspective and detail comes into play. Look no further the two-page spread of Goldy Pond’s collapse concluding Chapter 95 — sinking underneath the depths, this malformed Disney World park’s destruction represents the first real step in literally destroying the demons’ worldwide stranglehold, and Posuka demands we relish in it.

Ray’s astonishment at that moment may very well match our own — after ten volumes of blood, sweat, and tears, our young heroes have inflicted not one but two significant blows to this demon-ruled world. That they’ve achieved the impossible in out-muscling the monstrous demons themselves has further paved the road to freedom, something Ray himself, a notably pessimist figure, rooted for but may’ve secretly doubted all along. Now that the ending’s in sight, he’s further committed to Emma’s vision as is his adult counterpart in Mister , with The Promised Neverland‘s most humbling moment in the latter (finally!) revealing his name frees him from self-imposed shackles — after a decade’s worth of solitude birthing nihilism and bleak despair, we witness not one but two dismantled prisons in this volume.

With Goldy Pond’s fall, such catharsis in inevitable. Of course, we’re not out of the woods just yet —  we get another peek at the humans outside Grace Field’s walls, and as always, they don’t look pleasant —  but knowing such a foothold on the very foundation of the demon world’s mantra of kill-or-be-killed can be felled is spine-chilling proof for reader and character alike. Shonen manga doesn’t get much better than cathartic deviations like The Promised Neverland — rewarding their ambitions with the craftsmanship to back it up, even in sobering works such as this.

(After all this, though, I gotta ask: did Leuvis’s pet in Palvus survive Goldy Pond’s destruction? Surely, that little demon monkey’s not the true mastermind…right?) 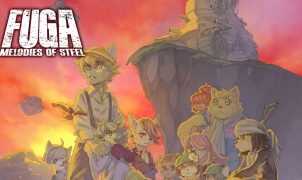 Older men declare war. But it is youth that must fight and die. A tranquil village is nestled snugly on the far end of The Free Lands of Gasco, a floating…