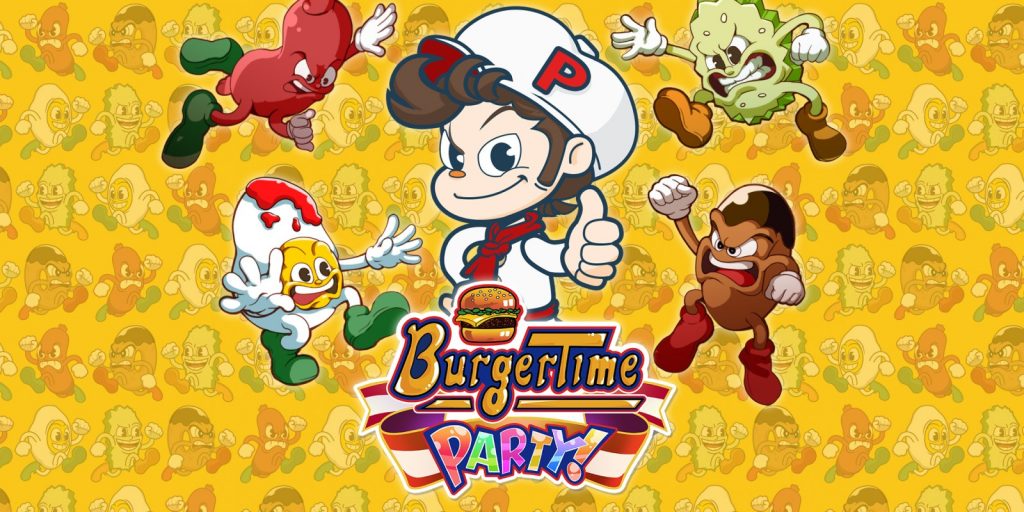 The 80’s arcade phenomenon saw quite a few bizarre and offbeat concepts for games.  Entering an arcade you could partake in serving patrons some ice-cold beer via Tapper, avoid getting run over in traffic playing Frogger, kill cute little animals by brutally inflating them until they explode in Dig Dug, and then there was BurgerTime.  In what could only be described as a chef having a fever dream, BurgerTime saw players assume the role of chef Peter Pepper climbing ladders to stack burger ingredients to make full-fledged, humongous burgers.  In a sort of Pac-Man fashion, Chef Pepper also had to avoid killer burger ingredients in the form of pickles, sausages, and more.  The game, though decidedly bizarre in nature, was a blast to play, and saw itself ported to multiple game consoles.  I have the Colecovision version in my personal library, though there are also versions for the NES, Intellivision, Atari 2600, and other classic consoles/computers of the era.

There has been a resurgence of interest in classic gaming titles with a new twist as of late, see for example Pac-Man Championship Edition and Tetris 99.  G-Mode had a similar idea for Data East’s fast food classic, and have given an old menu classic a new twist in the form of BurgerTime Party! for the Nintendo Switch. Players step back into the kitchen as Chef Peter Pepper and mostly follow the same recipe, though this time the kitchen has been adjusted to accommodate more people, and the dining room has quite the overhaul as well. 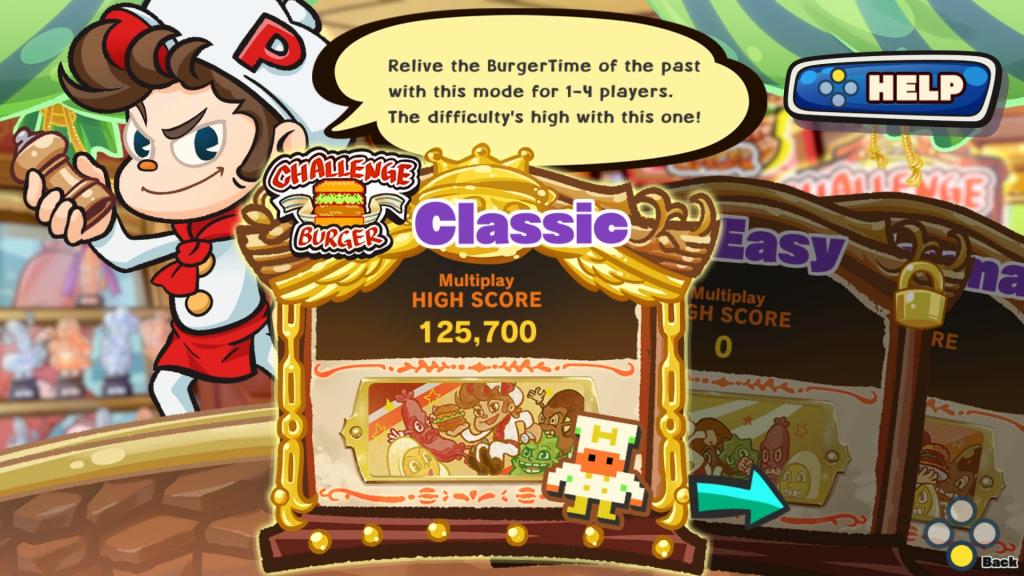 Overall, BurgerTime Party! has 100+ levels to trek through, each with its own score ranking.  Hope you’re hungry!

For people familiar with BurgerTime, the first obvious thing you’ll notice is the overhauled graphics.  Much akin to a flashy food advertisement or a cereal commercial of yesteryear, BurgerTime Party! has bright, cartoony graphics animated Adobe Flash style.  The animations aren’t anything too fancy, but they get the job done and are bright and crisp. The levels themselves, much like the old game, are made up of platforms littered with various burger ingredients.  Buns are at the very top and bottom, and things like tomatoes and lettuce are in between.  Walking over the ingredients on each level gradually lowers them down, until they fall and meet with the next ingredient down the chain.  The farther the ingredients fall, the more ingredients you can get to fall down.  Enemies can be trapped in between falling ingredients for extra points as well. 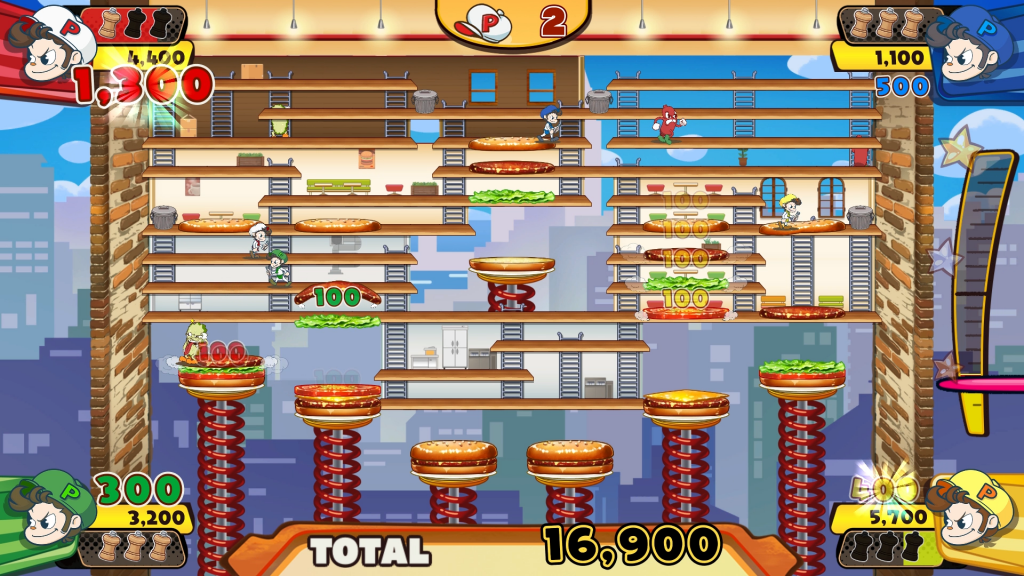 Levels in BurgerTime Party! can get pretty crazy even early on in the game, more players in the mix make things even trickier.

As any good arcade game strives to do, high scores are the most important end goal.  Keeping up with that fashion, BurgerTime Party! challenges players to get the highest scores in each level, ranking them from 1-3 stars depending on how well you do. Getting top points is actually pretty tricky even a few levels in.  The game is separated into a course of training levels, followed by standard levels that can be played by 1-4 players locally (online is not an option, unfortunately).

Though the levels themselves can be simple enough to clear, I did find myself having to think fairly hard to plot out a course for max points early on.  The difficulty is increased by the enemies chasing you.  Sausages are easy enough to kite around and put them where you want them, but enemies such as eggs, donuts, and pickles have behaviors of their own, and you need to take that into account when thinking about where to go for max burger points.  Stage hazards such as platform switches, oil slicks, and freezing ladders add even more variety into the mix, keeping the difficulty fresh and exciting. 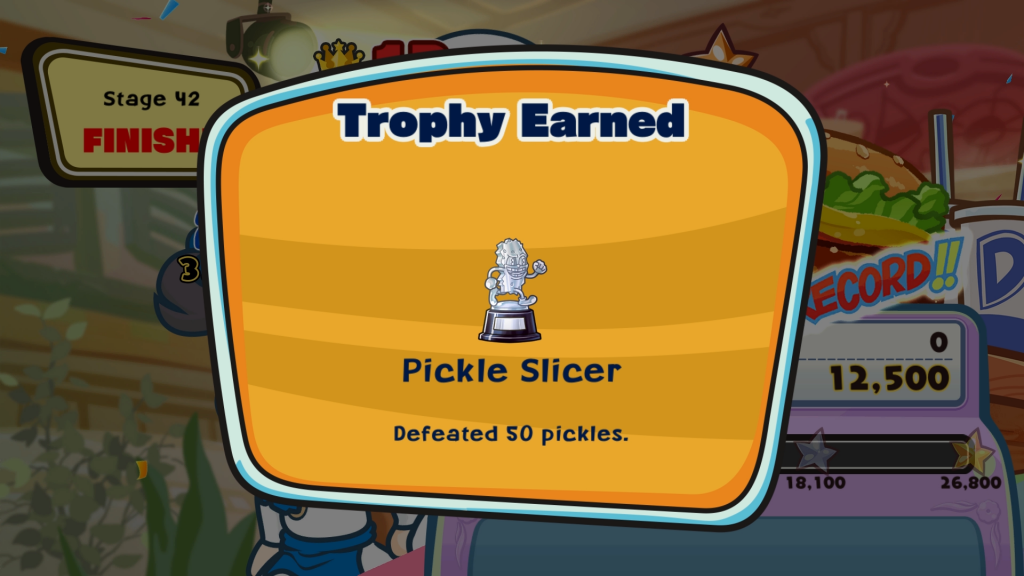 Aside from score based rankings, BurgerTime Party! has plenty of trophy based challenges to tackle.

The game starts out simply enough, but after a little while the levels get pretty expansive, which can be hard to see on the Switch’s smaller screen.  With additional players this can get especially messy, so I recommend playing multiplayer on the big screen.  Even so, multiplayer can get pretty hectic, which can be a good or a bad thing, depending on how you look at it.  You use pepper to defend yourself against enemies, and you can also pepper your other chef friends, whether on purpose or by mistake, which can be fairly annoying.  All lives in between players are shared too, so playing multiplayer get a little frustrating at first.  In addition to over 100 levels to play through, there are also numerous trophy based challenges to conquer.  Coupled with score based rankings, BurgerTime Party! has plenty of replay value on tap.

Ultimately, BurgerTime Party! is a pretty fun romp whether alone or with friends.  The busy nature of the screen space may be challenging depending on how you play and the cost of entry versus the overall experience may be a little hard to swallow, but the overall presentation is nicely put together and pretty tasty overall.  A sale price should make it easier to pick up too.  I can’t see Chef Pepper being awarded any Michelin Stars for this one, but I think he should still be an overall hit with the Yelp crowd.  Whether you grab a copy digitally or get a physical copy from your local retailer, I’d recommend BurgerTime Party! for a good, well, party game.  Bon Apetit!

Full disclosure: This review is based on a copy of  BurgerTime Party! given to Hey Poor Player by the Publisher.