Can Kirby save the day again? 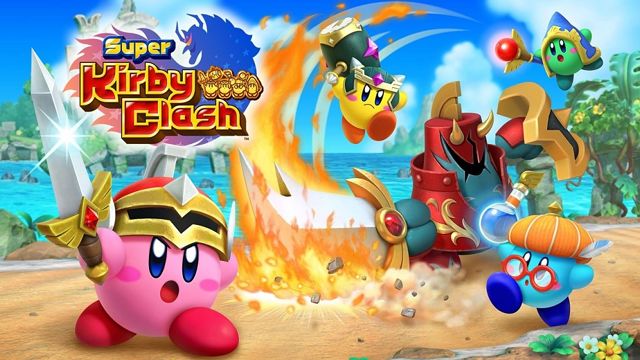 Another year, another Switch Kirby game leaving me at unease. As the self-proclaimed No. 1 Kirby fan who’s fervently touted the series’s modern Golden Age — featuring superb gameplay rivaling Masahiro Sakurai’s 90’s masterpieces, an explosion of lore, and a ceaseless flood of spin-offs and merch — it gives me no pleasure to admit our transition into an era that’s, well, less than perfect. Much as I may’ve eventually warmed to last year’s Kirby Star Allies, that I find myself wrestling with a mere derivative in Super Kirby Clash, an HD sequel to 2017’s Team Kirby Clash Deluxe 3DS spin-off and the game we’re reviewing today, gives me pause; no, it’s not that I forgot the very same free-to-play schemes plagued the original game, yet when coupled with odious online and an identical foundation, even its more generous takes on predatory monetization feel inadequate.

Based off the Kirby: Planet Robobot sub-game (which, in turn, owed more than a little to Capcom’s famous Monster Hunter), Dream Land’s now a medieval kingdom of old, with four-Kirby parties setting off into parts unknown to slay monsters and foil wicked plots. To the gaming cynic, the game’s iterative set-up — collecting Gem Apples (the game’s form of currency) to earn gear and spending Vigor stamina on EXP-granting Quests — it’s a disposable familiarity; for us Kirby fanatics, however, Super Kirby Clash induces a sugar-rush of activity escalating into multi-dimensional standoffs, all meticulously calculating the boons and lapses of four different classes (Sword Hero, Hammer Lord, Doctor Healmore, and Beam Mage) and an economy of Fragments and Gem Apples extracted from quest achievements. It’s familiar, but as far as actual play goes, it’s a good kind of familiar– like coming home from a long day of work and indulging ourselves into pampering, cozy routine. 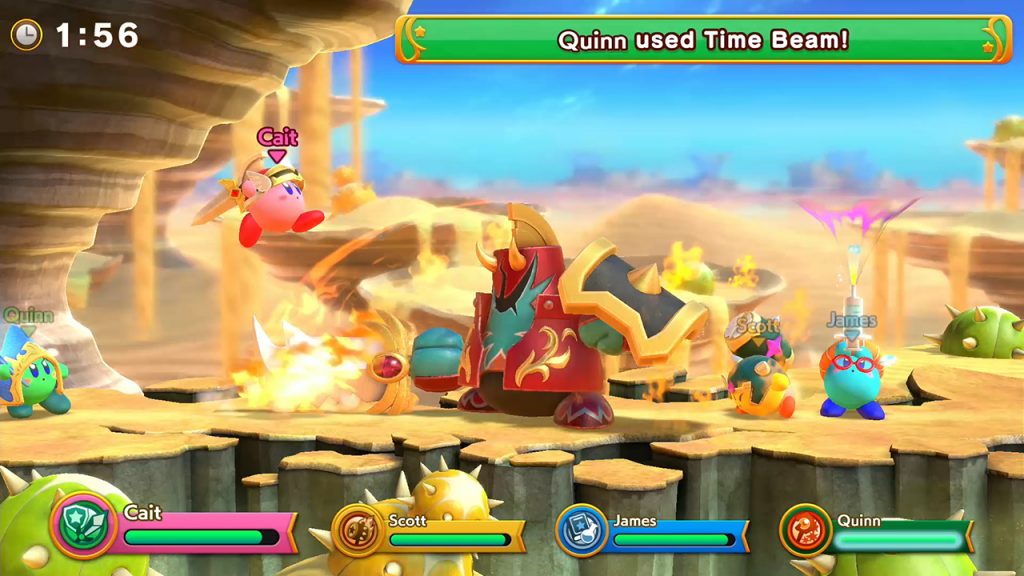 And yet, something about this sequel’s Gem Apple feedback loop irks me. As in the original, you can upgrade your Gem Apple rations by purchasing any one incremental pack, yet our problem lies in the highest price of all: $40.00. The full price of a 3DS game might be a fair deal, given that we’re basically playing an HD uprez and all, but observe the massive upgrade from 90 apples to 2000; as before, much of Super Kirby Clash‘s challenge stems from carefully rationing out your Apple/Fragment supply so as to appropriately gather gear and boosters as you level up. Knowing this easy temptation could ruin the game’s balance, our reluctance pushes us towards the lower tiers of payment; consequently, we end up spending more money than we would’ve had full price. That’s, uh, slimy.

One may argue the monetization effectively “ends” if you purchase said deal, which is true, but even the money-free avenues of leveling aren’t safe from frustrating impediments; namely, the bouts of sluggish online lag. Players with Nintendo Switch Online subscriptions are naturally inclined towards online co-op sessions; after all, they grant more EXP, so why not ditch the scatterbrained CPU and team up with living, breathing teammates? Sadly, Super Kirby Clash‘s faulty connections hinder this advantage– when the lag hits, it hits hard, with all four players awkwardly flailing about as if accosted by invisible jelly, helplessly watching the match’s clock tick down at a tenth of normal speed. I’d elaborate on how it’s especially discouraging in quests involving under-leveled players — simply imagine a group of Lv. 20-somethings tackling a giant Lv. 50 boss — but more importantly, it’s more than a little frustrating when the game already enforces a stamina mechanic that pushes towards a pay-to-play model. While the game mercifully cuts sluggish matches short, that it penalizes us by reducing precious Vigor isn’t exactly fair.

To clarify: you don’t need to pay for anything, but you’ll progress much more slowly.

Not to mention…look, in a perfect world, I’d have no problem with Nintendo’s humbling substitution for voice-chat: adorable, contextual Stickers encouraging our teammates. Alas, it’s here I encounter the same fundamental problem found in Zelda: Tri Force Heroes: I’m unable to direct clueless/arrogant teammates what to do. Ordinarily, this shouldn’t factor into a small-scale 2D beat-’em-up; after all, the goal of ganging up on one enemy should render itself obvious. And yet, it’s not uncommon to find myself stymied by that one stubborn teammate who adamantly refuses to pick up that last Power Tablet — the key to unleashing a devastating Team Meteor attack — and instead relies on their own prowess, often at the cost of wasted time (thereby missing our chance to earn Platinum Medals or certain achievements) or, worse: running out the clock and coughing up everyone’s hard-earned Gem Apples for overtime. It’s one thing, perhaps, if you’re catching up missions involving a Lv. 3 Giant Waddle Dee that can be taken down in five seconds, but a Lv. 66 Venom Kracko? No, I don’t care how impressive your Doctor Healmore is — grab that stupid tablet so we can stun the stupid thing. When compounded by the infernal lag, I’m prone to instead take my time with offline battles. (Sadly, my Kirby completionist directive ensures I’ll still be partaking in online matches. Argh!)

I am harsher on Kirby Super Clash than it deserves; truth be told, I love nothing more than spamming this Sticker, what with the pure imagery accompanying a lovely message (“Keep going!”) and the heart-melting squeal of Kirby himself. Like Dr. Mario World before it, it’s nothing more than the latest symptom of a new gaming world, and so I choose to roll with the punches and lay down in a bed of hypocrisy. Call it my duties as the No. 1 Kirby fan, call it my inability to channel my Angry Kirby and become truly upset at anything starring the wholesome puffball — but even despite its cuddly demeanor, not even the sugary-sweet presentation can fully scrub away Kirby’s newfound appetite for money. For the Kirby faithful such as myself, it’s the latest piece of unmissable lore, cuteness, insatiable action, and fan-service; for those long frustrated by Nintendo’s online standards and/or mobile-esque monetization, you’d best wait until the next mainline Kirby.

We’re rootin’ for ya, little guy! 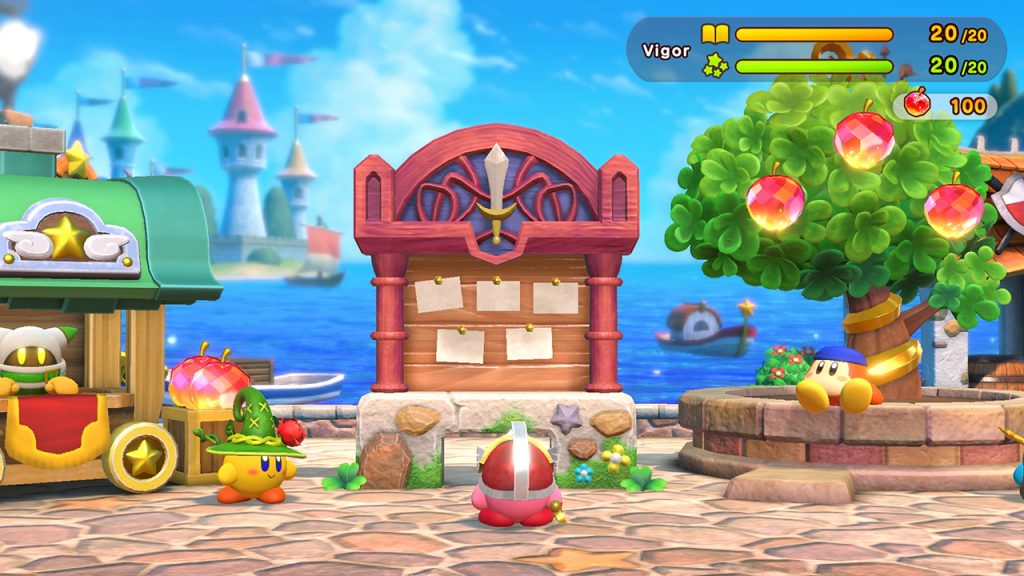 Full disclosure: This review is based on a retail copy of Super Kirby Clash.