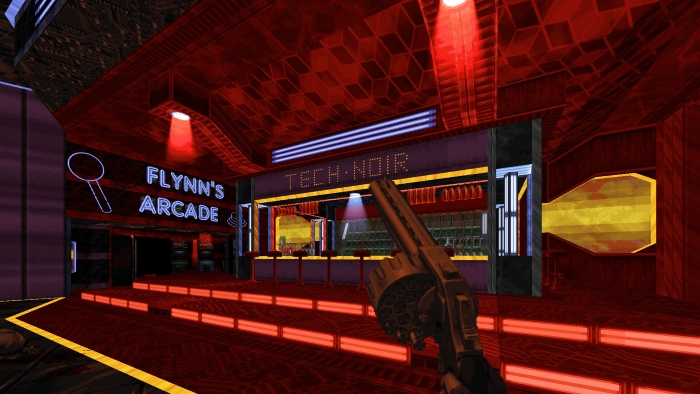 Let’s address the elephant in the room before we get started: Ion Maiden has had its share of controversy, from legal disputes with a certain heavy metal band to including some off-color jokes that the developers have decided to leave in. While I don’t endorse juvenile jokes that target minorities, this review will focus on Ion Maiden on its merits as a game. Whether or not you choose to support the developers is entirely up to you as a consumer, as they’ve made it clear they won’t change the game’s content. With that out of the way, let us begin!

In case you’ve been living under a rock for the past year or so, here’s the basic gist: Ion Fury is yet another throwback FPS that emulates how things were done back in the 1990’s. However, this particular title is considerably more authentic in this endeavor as it uses the Build engine.Yes, the very same engine that powered Duke Nukem 3D more than two decades ago, albeit in a heavily modified form based on the EDuke32 source port. The end result is a game that would have been comfortable alongside the shooter pioneers, but with just enough polish and modern touches to appeal to a contemporary audience. 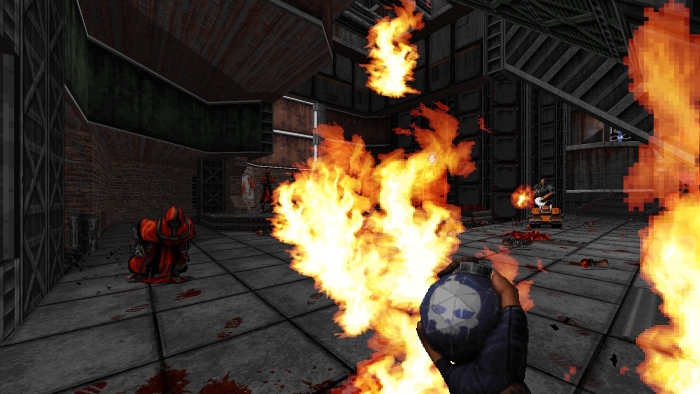 The game places players in the role of one Shelly Harrison, who is a bomb disposal and weapons expert in the in the indeterminable near future. In the city of Neo D.C. (a direct homage to Neo L.A. from Duke Nukem II), a transhumanist maniac named Heskel plans to take over the world with his army of cyborg cultists. Shelly takes it upon herself to stop Heskel with a barrage of weapons and one-liners. It’s flimsy as toilet paper but the best FPSes aren’t exactly known for their plot strengths. And if you’re wondering: yes, this is the same Shelly who starred in the mediocre 2016 top-down shooter Bombshell, and slated to be Duke Nukem’s companion oh so many moons ago.

Fortunately, the game behind the almost non-existent plot is rock-solid enough for you to sharpen a knife on it. It’s classic first-person shooter action from the 1990’s, and you know what that means: complex and abstract level design, key-hunting and secrets, and a crazy amount of enemies in cramped spaces. And there’s nothing better for the job than an arsenal of delightfully destructive death-dealers and furious firearms. Shelly’s default weapon – a high-capacity revolver called the Loverboy – remains useful throughout the game as a sniper weapon and for locking on to and targeting enemies with a devastating barrage of bullets. Shelly’s other weapons include shotguns, Uzi’s, grenade launchers, tossable bombs, machine guns, and even an electrified baton. To keep the arsenal more compact, most of the weapons derive their functionality from primary and secondary modes. For example, the shotgun doubles as the grenade launcher. However, I might be so presumptuous to say that the bowling bombs are easily the best weapon, or at least the most fun. 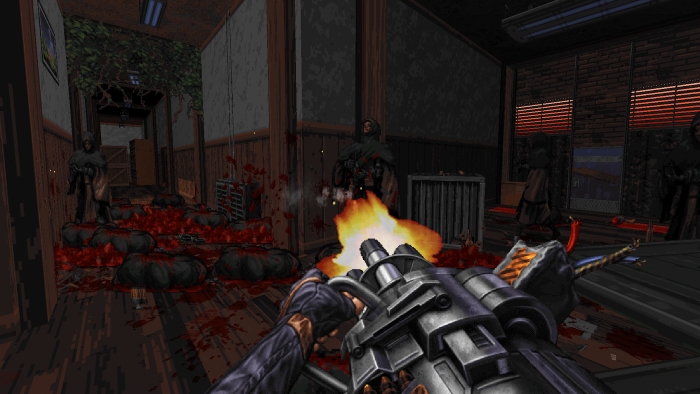 Ion Fury‘s graphics are retro, but absolutely gorgeous. It’s all pixels and sprites, but they’re all extremely colorful, large, and smoothly animated. It matches anything polygons have to offer in terms of sheer beauty and artistic merit. The music, too, is fabulous: we’re talkin’ authentic tracked modules, with that distinct 90’s demoscene sound and placing its foot between ambient electro and downright techno in parts. It’s great for the ear.

But not is all right in the land of the femme fatale. Ion Fury does fumble the ball a bit. Chief among my grievances is the lack of multiplayer. The streets and factories of Neo D.C. would be fantastic for players to use as arenas. It’ll also be super fun to throw – and dodge – bowling bombs from your friends and enemies. But, alas. Hopefully this will be addressed in a future patch or perhaps a DLC. And yeah, this totally needs DLC. What good is a retro-style shooter without a noteworthy expansion?

If you look past the controversies and juvenile humor, you’ll find that Ion Fury is an absolutely rock-solid FPS experience from beginning to end. The developers totally get what made retro shooters so much fun , and they’ve channeled that formula into this archaic game with skill and grace. It’s everything a Build game should be, and everything that made first-person shooters so endearing in the first place. If you’re an FPS fan, then you need this. If you’re a retro fan, then you still need this. Navigate hereabouts in order to secure a copy for yourself. Because the trio of Build engine masterpieces – Blood, Shadow Warrior, and Duke Nukem 3D – have officially become a quartet.

Full disclosure: this review is based on a Steam key for Ion Fury purchased by the reviewer.