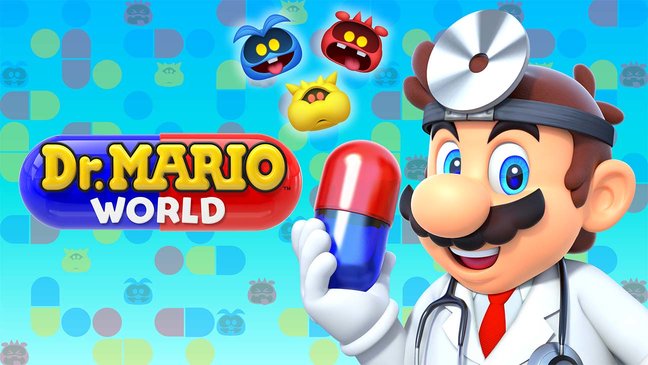 Before I embark on any finger-wagging spiels on predatory micro-transactions, let us make one thing clear: as seen below, I thoroughly enjoy Dr. Mario World enough to grant it a 4/5 rating. In its ambitions to court veterans and newcomers alike, Dr. Mario’s latest concoction successfully tinkers with the series’ puzzle formula, prescribing new mechanic after mechanic within the confines of touch-screen play. The paper-thin context of Mario and the gang banding together to fight off nasty viruses is yet another comedic framing of Mario creator Shigeru Miyamoto’s “troupe” concept for the series at large, and I’m never not tickled at Bowser dressed up in doctor’s garb and getting down to some virus-bustin’. The online Versus mode is a wonderful substitute for the sorely-missed Dr. Mario Online RX. For all this and more, it remains a staple of Uber drives and lunch breaks.

And yet, Nintendo’s latest mobile effort somehow stymies me — I refer not to the inevitable frustration in losing any one round, but of its insistent monetization schemes that trespass every last Megavitamin session. For those like me who’re free from addiction tendencies, this may come across as redundant — let it also be known I’ve only wadded waters within the mobile gaming sphere, so I can’t speak to Dr. Mario World‘s relativity of monetization towards other infamous puzzle-genre offenders like Candy Crush — yet for as much as I’m enjoying it, it’s certainly the first Nintendo offering to actively infringe upon my engagement. 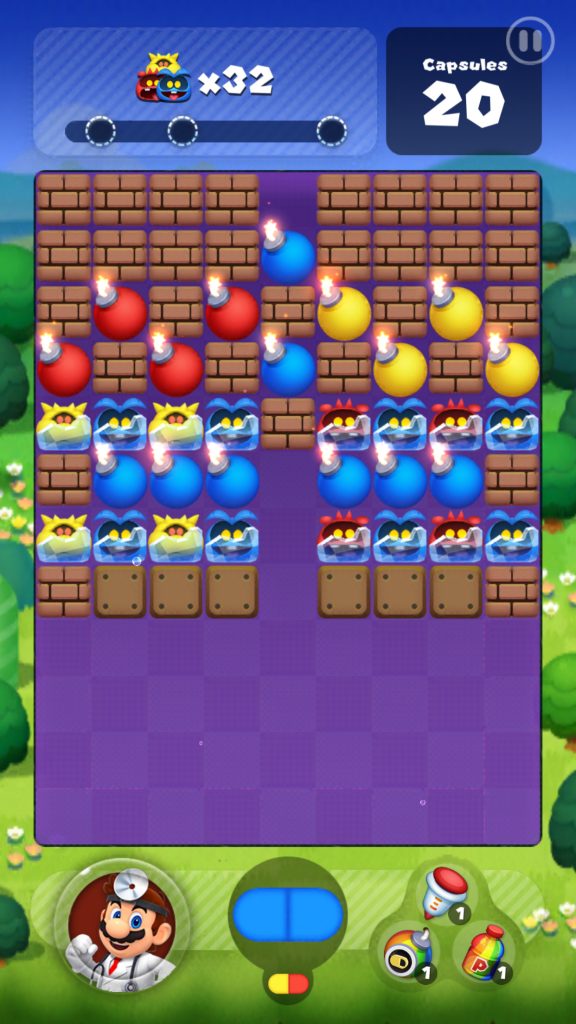 But first, the good stuff: in the trip to mobile, Dr. Mario World takes the liberty of altering the series’ core gameplay, albeit hardly enough to feel alien. While the game still revolves around the familiar three-match, color-coded gameplay, pills now dodge the laws of gravity and drift upwards for the convenience of touch control. It bears emphasis that any and all pills, be they whole colors or fractured pieces, slide at the whims of our fingers, thereby easing the stress of jamming up the virus-hosting bottle — previous entries’ point of failure, one compounded by collateral fragments sinking further down, ruining or vindicating a player’s calculated plan — in favor of a newfound goal: operating around a limited supply of pills. Not that Dr. Mario World doesn’t enforce this familiar rule — actually, it’s the main directive of the Versus mode, which we’ll get into later — but I can’t recall our favorite physician ever shaking up his game to this extent.

It’s a direction I like to think works, what with the steady flow of new ideas and all. Some merely elongate our puzzle-solving — viruses soon grow encased in pill-resistant ice, a condition calling for repeated stacks as we mentally juggle our dilemma: do we zero in on frozen viruses, or enforce a balance  Meanwhile, surgically removing hidden coins doesn’t require us to eliminate every last virus, but still demands careful manipulation all the same as we remove the germs obscuring them; after all, even left-over pills count as obstruction, so aspiring doctors can’t be too wasteful! As these mind-bending puzzles pile up, we gradually recognize the set-ups encourage experimentation; for instance, in a move echoing the original, one pill-saving maneuver entails placing a capsule flat onto a vertical stack of, say, red viruses — once that row’s neutralized, we quickly grab the remaining red piece and drag it over to another line-up of buck-toothed gremlins. In any good puzzle game, there’s no better reward than a careful procedure coming together, and Dr. Mario World‘s no exception.

Knowing what you do now, where should Dr. Peach place the blue vitamin? 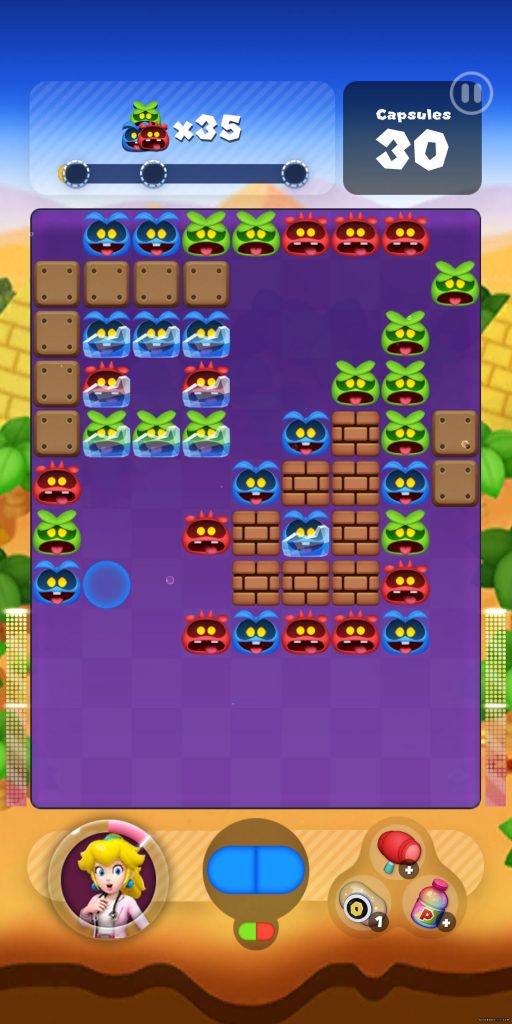 (Let’s not forget that, in a series first, you can even slide capsules through virus formations into an accommodating empty niche, although problems arise here- – with sensitive touch screens being what they are, it’s not especially rare for one innocuous touch to abruptly slide one pill into a compromising, fatal position. With puzzle games’ inherent pressure of zero tolerance for mistakes, frustration can, and will, ensue.)

When stacked upon the organic feedback loop of everything from character-specific abilities, skill-granting assistants (who would’ve thought King Bob-omb had such medical talent?), and Doctor’s Orders — timely missions keeping us engaged with coin rewards — alongside occasional pill handouts for tough levels, Dr. Mario World presents itself as a perfectly healthy blend of gaming addiction…that is, if one is blind, and therefore cannot witness its aggressive monetization prompts. Let’s put it this way: as I don’t possess addictive tendencies, I could apply the Heart limit — this game’s version of the timed lock-out meter so pervasive in mobile gaming — as a helpful restriction to keep me occupied merely for the duration of my lunch break. And yet, every time I lose a round — and with puzzle games being what they are, that’s hardly uncommon — the game still decides to scream in my face about purchasing diamonds and hearts and other trinkets I could simply wait to earn. Much as I pretend otherwise, Dr. Mario World really wants me to spend money, not the least in how I can only obtain extra doctors and assistants via pesky randomized rolls.

When considering what sort of game Dr. Mario is, I can’t say this sits well with me. Recall that losses in Dr. Mario don’t always mirror the errors in judgment we make in, say, commanding forces in Fire Emblem Heroes; nay, there’s also the fickle whimsy of our doctor’s RNG-powered capsule supply to consider. I can’t count how many times my desperate-hour pills spelled my doom merely by being the wrong color; no, even worse, I may’ve completed the level, but more mismatched Megavitamins ruined my chances of a Three-Star Rating! I’m well-off embarking on a Super Mario Run completionist run knowing I’ve already paid the ten dollar admission fee; I can’t help but feel uneasy knowing Dr. Mario World routinely asks for more cash so I can accomplish the same goal.

C’mon, Mario: you’re better than this! 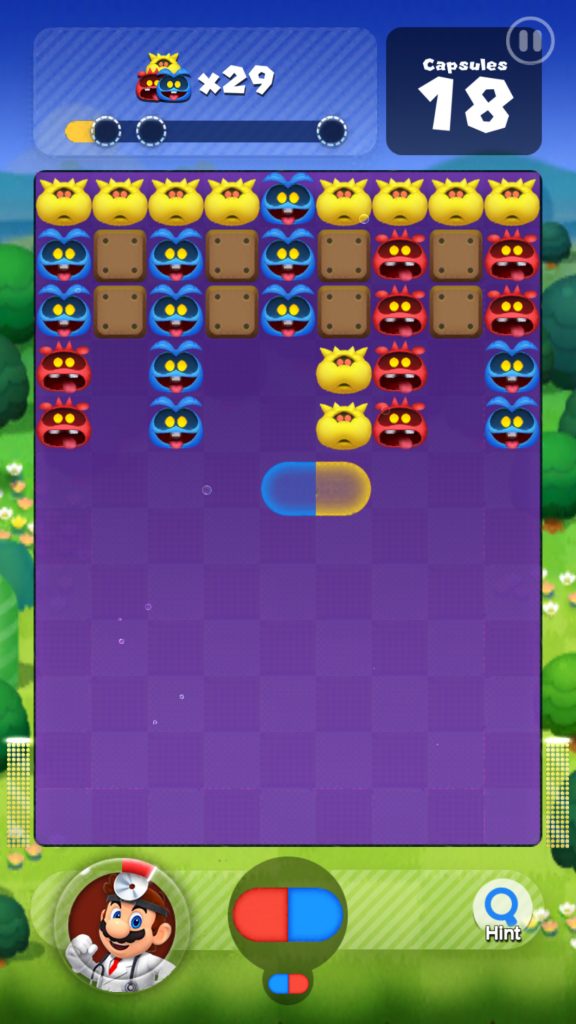 This is all a long way of saying, “Dr. Mario World deserves better than the faux free-to-play model,” and I say that despite knowing the game makes sincere efforts to work around this outside of the free 20-level tutorial; namely, the Versus mode. Entirely Heart-free, this addictive online mode pits us against other players in a more familiar Dr. Mario — a cutthroat contest pressuring us to overwhelm the other player’s jar, furiously exchanging an ever-growing invasion of viruses. A more harmless feedback loop exists in rewarding us with unpaid lootboxes and prizes. It’s good, clean, and encourages healthy competition — exactly what you’d expect from a company priding itself on family-friendly entertainment.

And yet here we are, with Nintendo having it both ways after being backed into a post-Super Mario Run world. Much as I don’t want Mario and co. engaged in such capitalist propaganda, next month’s Mario Kart Tour‘s primed for more of the same — as a Nintendo diehard, how do I feel about such randomized concepts being exploited? I have only my hypocrisy to blame: the arrangements of Hirokazu Tanaka’s classic tunese and the familiar gameplay compel my patronage, but even if I shan’t spent a single cent, all this desperate monetization is a tough pill to swallow. Not enough malpractice to ruin my fun, mind, but there’s still a bitter aftertaste knowing what should’ve been the finest Dr. Mario yet is intentionally stifled for the sake of profit.

I wouldn’t mind paying for this — just once, mind! 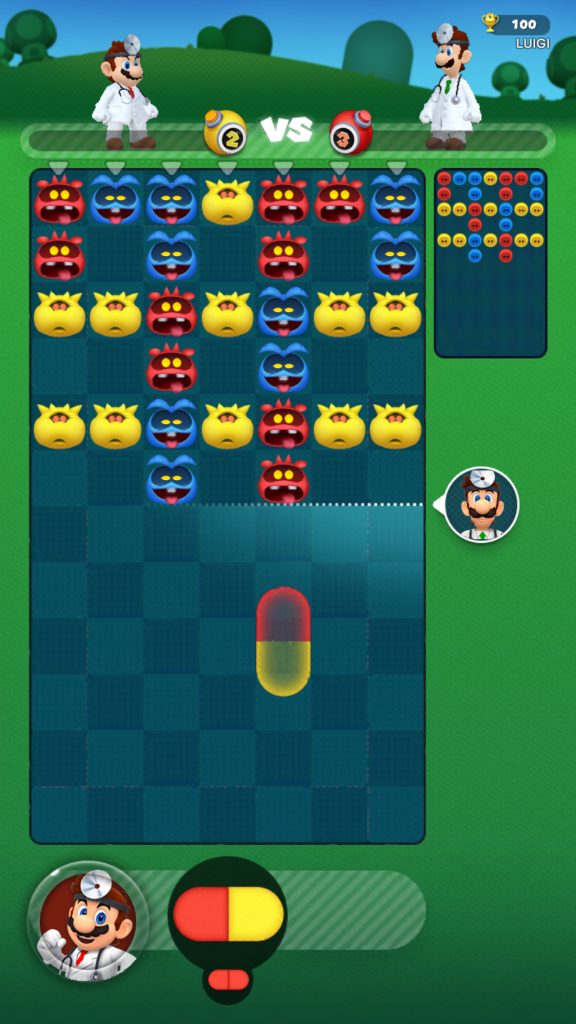 Full disclosure: This review is based on a retail copy of Dr. Mario World. 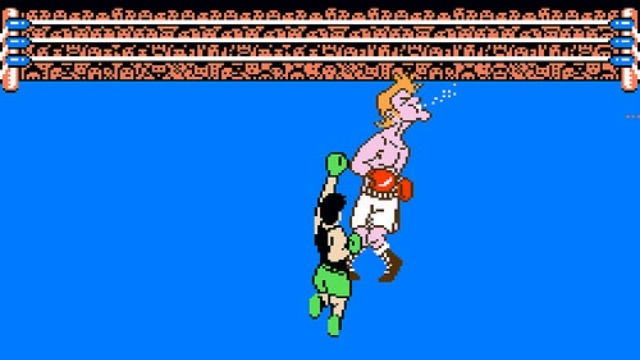 Elex, also known as Dost Thou Wishest To Join Our Faction, Good Sir?   RPGs are a dime a dozen. Gamers can’t swing their Mario hats without knocking down…