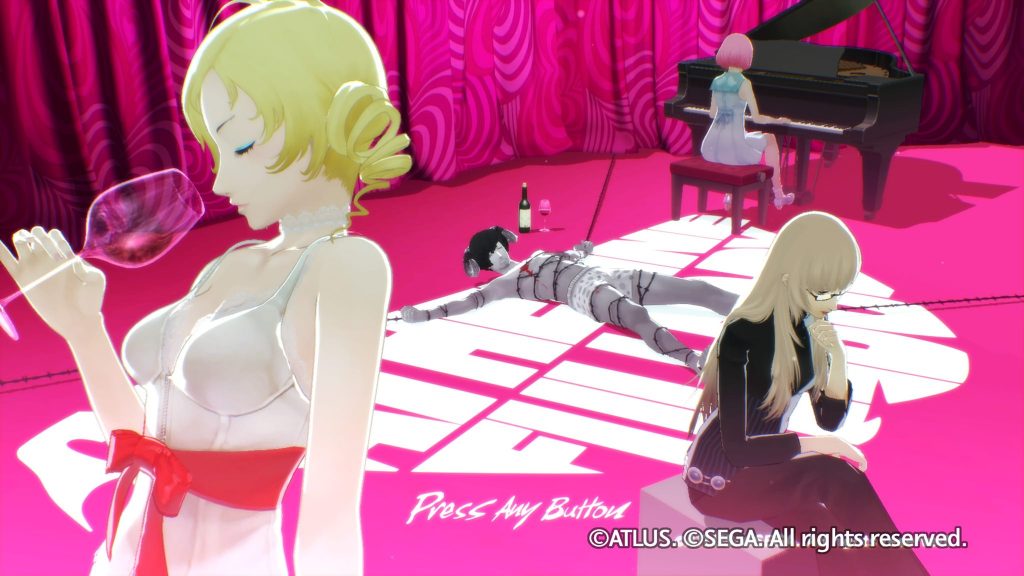 If you have any interest in Catherine: Full Body, then you most likely fall into two distinct categories. You’re either a fan of the original 2011 release, simply titled Catherine, or you have caught word about the series before and want to experience the game that is “unlike any other.” The big question these two categories of people are asking is, “Should I drop $60 on what is being labeled as a “remaster” of a game that is only eight years old?” That’s a fair question, especially when most remakes/remasters fall in the budget category. 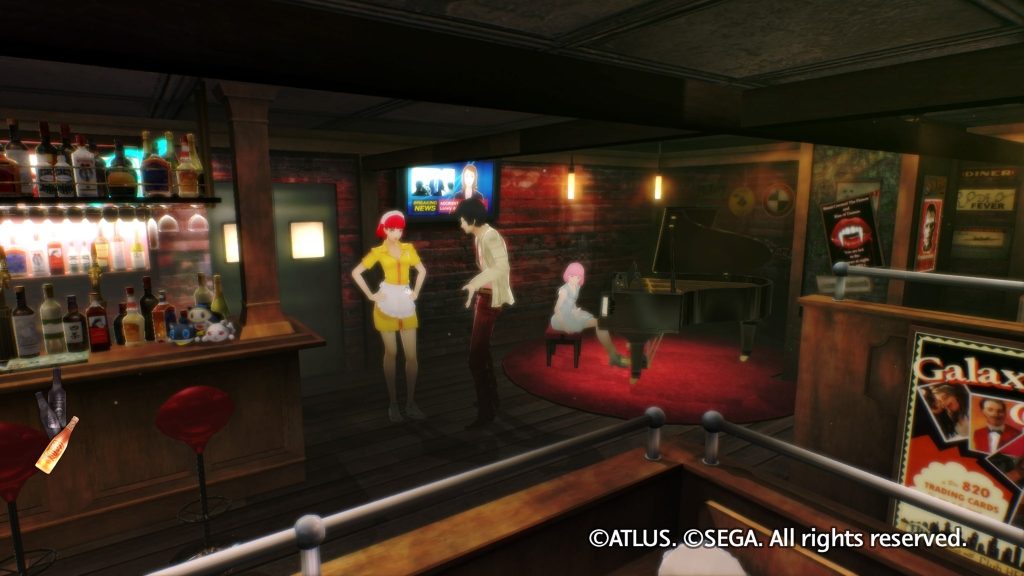 Rin’s character is placed neatly in the corner of the bar, away from the main characters.

For those that don’t know, Catherine is a game about a 32-year-old slacker named Vincent. Vincent is kind of in a rut at the moment. He spends almost every day doing the same exact things. To begin his day, he has breakfast with his girlfriend, Katherine (with a K), while fumbling through awkward conversations with her. He then heads to work where he tries to please his bosses at his new job. Once he puts his eight hours in, he makes his way to the local bar to sip on a few brews with his buds.  While Vincent is having a good time at the bar, he usually starts to get multiple texts and calls from his girlfriend asking him where he is and reminding him that he shouldn’t be drinking so much. To end the day, and after a few too many drinks, Vincent heads home to sleep off the booze. Then it’s rinse and repeat.  Well, that is until the nightmares begin.

While trying to live his so-called best life, Vincent starts to experience a recurring horrific nightmare where he must race up a large maze-like pyramid whose pieces must be moved in a particular order to get to the top. To make matters worse, some of the pyramid’s pieces are fitted with deadly booby traps. Oh, and the whole structure is falling apart from the bottom, so Vincent must hurry or he could run out of time and fall to his death. The horror doesn’t end there. The nightmare is capped off with a larger-than-life monster chasing Vincent up the pyramid, and if the monster catches him, he could die. This is a dream, so dying shouldn’t be so bad….right? Well, not exactly. More on that later.

During one of his late nights at the bar, Vincent meets a sexy, younger girl named Catherine (with a C). He chats it up with her and ends up having a good time, completely forgetting about his current girlfriend, Katherine. After guzzling down a few drinks, Vincent says goodnight to his new friend and decides to head home. After yet another nightmare, Vincent wakes up in a cold sweat; only this time he’s not alone. The girl he met at the bar the night before is wrapped tightly around his arm! He apparently slept with this girl, but the problem is that he can’t remember anything after leaving the bar.

As you can imagine, everything spirals out of control from here. Vincent must now juggle two girlfriends while dealing with these insane nightmares that are taking a significant toll on his mental health. To add to the insanity, almost all of the other men who frequent the bar seem to be having the same horrific nightmares. Vincent’s concern goes through the roof when the local news starts running stories about multiple young men in his area who are inexplicably dying in their sleep. What the hell is going on around here? 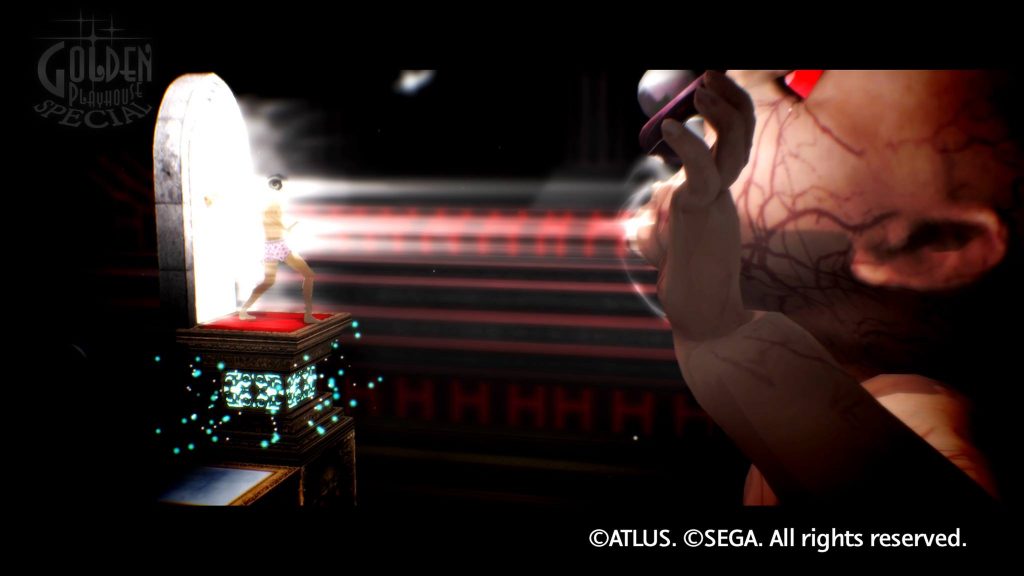 The monsters that chase Vincent up the structure are worthy of their own games. The baby is horrifying.

Catherine: Full Body’s Gameplay revolves around two different scenarios. One scenario has the player controlling Vincent while trying to solve the multiple pyramid puzzles in his nightmares. The second scenario involves the player choosing what dialogue Vincent delivers to others during his day-to-day activities, which in turn, determines which of the many story endings the player uncovers.

So, what’s new with this remaster? Well, a lot! There are over 500 puzzle scenarios to run through in both multiplayer (local and co-op) and single player modes, which doubles the amount in the original game. There is also a Remix mode that will add Tetris-like shapes to the pyramid instead of the standard blocks the game is known for. This is a substantial addition that will please returning gamers who may have grown tired of the traditional puzzles. 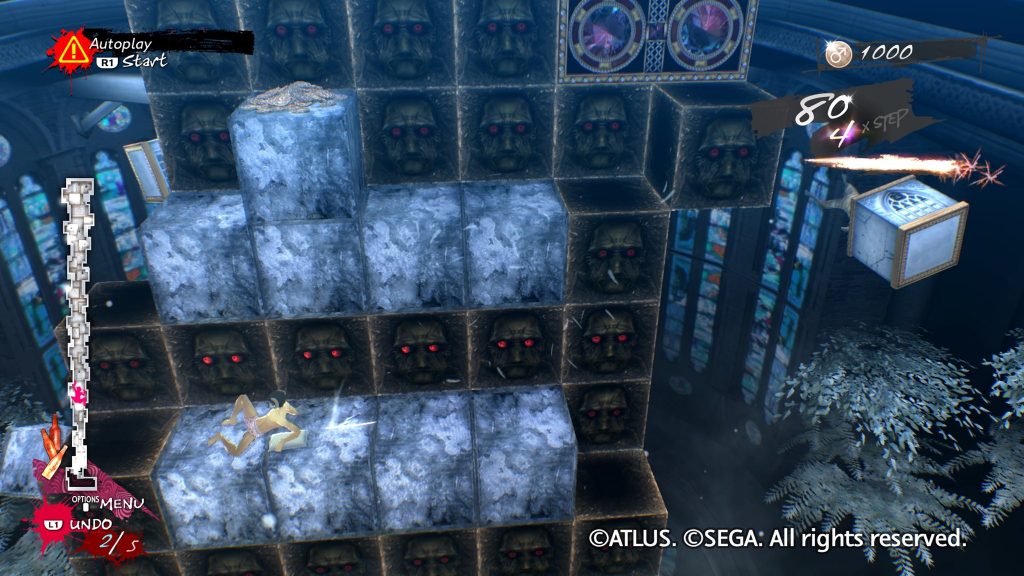 Ice is only the beginning of Vincent’s worries. There are also spikes, mines, and black holes to avoid while trekking up the pyramid.

There’s also a handful of new music throughout, but these are mostly in the form of remixes. Returning players may not notice the new tunes unless they played the original game fairly recently. Persona fans will be happy to know that there are now many songs from Persona 3, 4, and 5 added to the bar’s jukebox, which is a welcome addition, especially compared to the non bar-like tunes that were originally included.

All of these updates are nicely wrapped up with several new cutscenes that flesh out many of the character’s backstories. The best part about these cutscenes is that they feature all of the original voice actors. With the exception of Rin content (more on her below), the new scenes blend seamlessly into the original story.

The biggest new feature that’s included with Catherine: Full Body is the addition of yet another love interest to Vincent, named Rin. Rin gets introduced to the player almost immediately and is not-so-smoothly puzzle pieced into Vincent’s already outrageous story. Early on Rin seems to blend well, with each of Vincent’s friends giving their input about her and her lack of memory due to amnesia. But after certain cutscenes or dialogue options, we’re left with Vincent having mostly no connection with her at all, besides a handful of short conversations.  She does help Vincent in the dream world by slowing down the destruction of the pyramid, but again, this seems to be another shoehorn addition.

Depending on the player’s choices, some storylines have Rin’s story ending abruptly at the halfway point of the main story, without a conclusion. Not all players will experience Rin’s sudden end to the main story, but it’s definitely going to be a downer to those that do.

Similar to Rin’s storyline, her character gets shoved in the corner of the bar, hoping to be acknowledged.

To those that have yet to experience Catherine for the first time, you’re in for a real treat. The story is amazing, even with the seemingly forced Rin content. Secondly, the graphics have been upgraded, giving Catherine: Full Body a little spit and polish. These upgraded visuals aren’t too substantial, so some returning fans may not even notice. Either way, this is still a solid way to experience a “next-gen” Catherine.

Like most Atlus games, the player can tailor their experience to their liking with multiple difficulty modes. If the puzzles are too difficult, there is now a feature to have the computer complete them for you, and if you don’t want to watch the computer, you can simply turn on safety mode and skip the puzzles completely. It’s good to know that there is no penalty in doing this either. This feature is especially helpful if you’re just in it for the story, or you beat the game several times and are getting tired of the puzzles.

So this brings us to our main question – Should you purchase Catherine: Full Body? That’s a hard one to answer. If you’re an uber-fan of the original game, then you already know the answer is yes. If you simply liked the game, then I’d say you’re fine if you pass this one up or wait for a drop in price. The additions are nice, but they don’t warrant the game’s hefty price tag. Now if you’re a gamer that has yet to experience Catherine, then picking up Catherine: Full Body is a no brainer. This is one of those games that will stick with you for years to come.

Full disclosure: A review copy of Catherine: Full Body was provided by the Publisher. 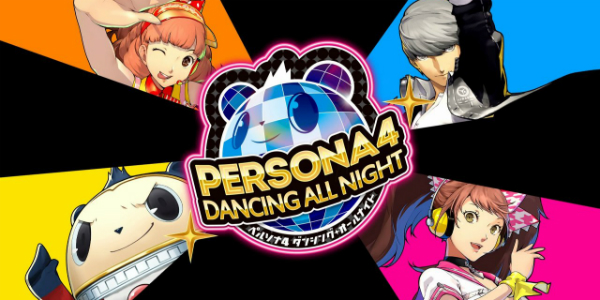 Dancing through the shadows   Persona 4: Dancing All Night reunites the cast of Atlus’ venerated role playing game for an encore performance. However, rather than slashing through shadows…