When time freezes at the dawn of the new millennium, it’s up to Sherry, Pegreo, and their robot buddy Isaac to set things right. But will their journey be an easy or enjoyable one? Time to find out as we go hands-on with Destiny Connect: Tick-Tock Travelers 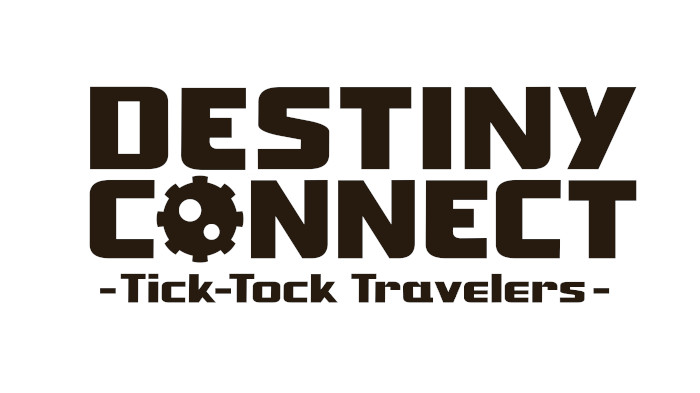 If time is an eternal companion, then what happens when it goes missing? Do life and the world itself just grind to a halt?

Destiny Connect: Tick-Tock Travelers is a name you might be familiar with. At first glance, the game looks very different from many other titles Nippon Ichi Software has developed. However, other people might remember reports of the game only achieving a 20% sell-through rate at launch. In short, the game didn’t perform well in Japan. This could be for a number of reasons, however.

The unique art-style could be a major factor in Destiny Connect’s low sales. This art style might just not appeal to a Japanese audience. Especially for fans of Nippon Ichi Software developed titles. However, it’s also possible that the game itself could have issues. Famitsu gave the game a 29/40 or a [6/8/8/7] when broken down by the scores of its four reviewers. Sure, those aren’t amazing numbers, but that’s still respectable. So, what’s the issue here? Well, at the invitation of NIS America I took a trip to their offices to find out. Let’s start our quest with a bit of backstory about Destiny Connect.

At the Dawn of the Millennium, Time Decides to Take a Vacation 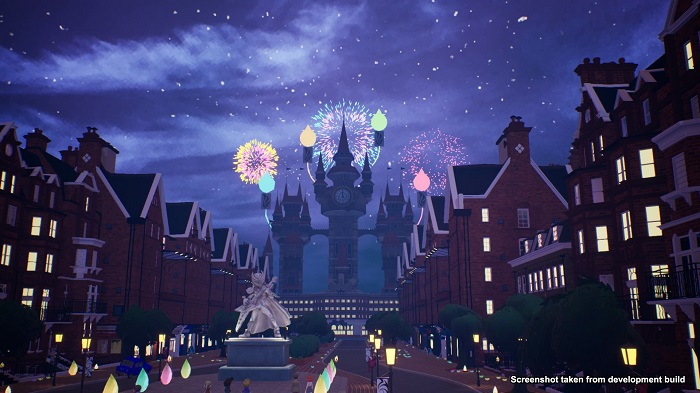 That’s certainly a gorgeous scene. Except that the world is frozen like this. Yes, everything is as still as a picture.

Destiny Connect takes place in the town of Clocknee. Just as the new millennium is about to dawn, time suddenly comes to a halt. People stop moving, fireworks are frozen in the air, everything is eerily still. Well, except for the hordes of machines, appliances, and robots that are suddenly roaming about. Whether time decided to cash in its accrued vacation days all-the-sudden, we don’t know. However, these robots apparently didn’t get the memo about things being eternally frozen. …and neither did our heroes.

Sherry is a young girl living in Clocknee. And as these events begin, she finds that she’s not only aware that everything has stopped, but that she can move around. It doesn’t take long before she finds Isaac, a large robot in her father’s workshop that promises to help her. Isaac though is not the last member of our party.

Shortly afterward, the two find another of Sherry’s friends. A timid young boy named Pegreo. Together the three of them set out to solve the mysteries of both time grinding to a halt and where this horde of killer machines have come from. Their journey will take them both to the past and the future, but first, they need to survive the present. Which is where we’ll begin our dive into the build I played. 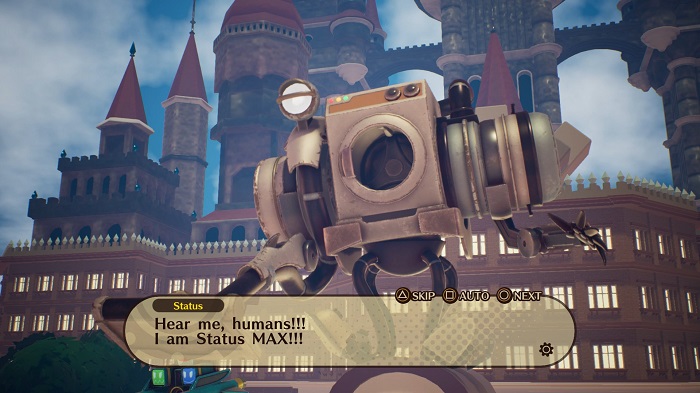 Ok, ridiculous things like this are exactly why I love video games! Unforutently, there’s a lot of dialogue before the silliness begins.

Destiny Connect has a very text-heavy opening. Before you even get to your first bit of combat, there are several story sections you need to get through. Most of this is running around and completing a few errands as Sherry. Normally I’m ok with this kind of setup in a game since it gives you time to get to know the characters and their personalities. However, Destiny Connect does have an issue in this regard. There’s no voice acting.

Whether you prefer your voice acting in Japanese or English, I think we can all agree that voice acting brings a layer of personality to the characters in a game. Sure, in the 16-bit era that wasn’t really possible due to technical limitations. However, these days voice acting is practically expected. Especially in something like an RPG. So, when you have long stretches of narration with no voices, you can feel a bit disconnected from what’s going on. In order to remedy this, Destiny Connect instead tries to have its character animations do the talking as it were.

Expressing Emotion Through Action Instead of Sound 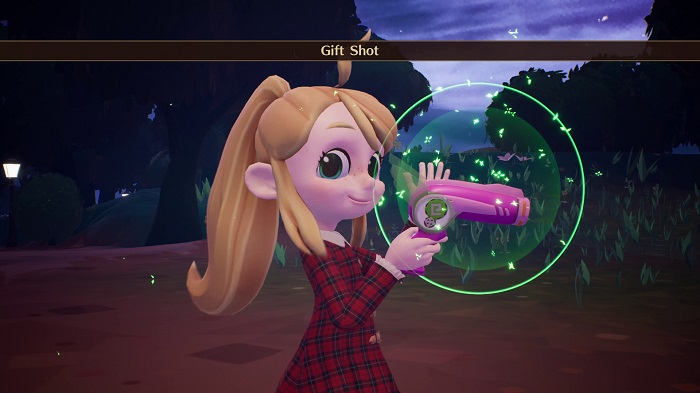 Sherry is a very expressive young lady; which is one of the major strengths of this art style.

While some may find Destiny Connect’s character designs an odd choice for a NIS America game, I actually quite like them after seeing it in action. Sherry is a very expressive character. She comes across as very confident and sassy. From doing a gun-twirl before combat, to pouting, to even punching her dad in the stomach in a fit of annoyance; she’s very lively. Which the art style helps to convey. It helps to fill that void the lack of voice acting leaves. Is it successful? Not as much as the developers hoped, I think.

The main issue here is just the amount of dialogue. Nippon Ichi Software is still writing a decompressed text-heavy RPG instead of something simple and quick where those character expressions can shine. Sure, they help, but it’s not enough to keep me engaged. To better explain this, let me make a comparison to another NIS America title, The Princess Guide.

In my review of The Princess Guide, I mentioned that I kept imagining how those characters would sound in English; I’m doing the same here. The difference though is that the Japanese voice acting in The Princess Guide kept me engaged, while the absence of any voice acting leaves me distracted. Still, I do want to commend the developers for putting as much effort into Sherry’s expressions as they did. It does help the experience. What about combat though? Is it more engaging? Well, let’s delve into that, shall we?

We Cannot Go On Without Our Robot Buddy 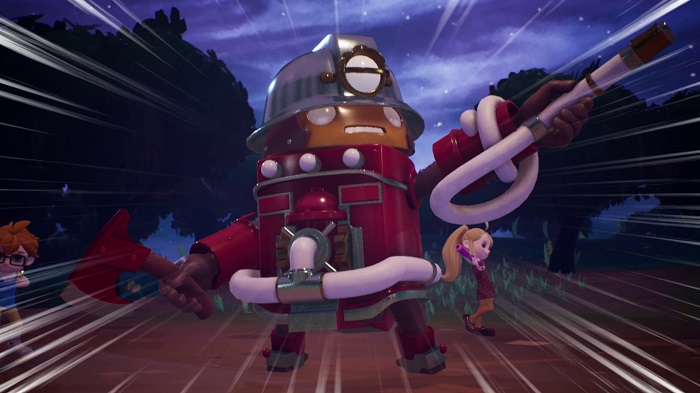 Huh, I didn’t know Isaac was a fan of awesome SNES games. Then again, this could be considered a Magical Quest.

Destiny Connect uses a turn-based battle system. In fact, one of the odd things about this game is that it feels more like a Compile Heart title rather than a Nippon Ichi Software one. This extends even into the tutorials, which are more informational screens than anything else. Still, combat does work just like any normal JPRG; with one exception. It is essential you keep Isaac alive.

In an odd decision, the developers decided that if Isaac falls, it’s an instant Game Over. Now, other series, such as Shin Megami Tensei have done this. So, there is a precedent. In fact, since Isaac serves as a time-machine, once can argue that narratively this also makes sense. However, implementing this requires the development team to pay close attention to how combat is balanced. After all, if the enemy decides to gang up on Isaac and ignore Sherry and Pegreo you can very quickly end up losing a fight. So, does Destiny Connect avoid this? To be honest, I’m not sure.

While normal enemies seemed to target both Sherry and Isaac, the one boss I faced almost seemed intent on taking down our robot friend. Thankfully, Sherry does have the ability to heal Isaac. Which helped immensely during the fight. However, it was a very tense boss fight. I suspect grinding and equipment is going to be your friend in this game. Though, it’s still a bit too early to tell. So, where does that leave my opinion on Destiny Connect? Well, let’s wrap this up and talk about that.

If Time is Money, Then How Long is a $10 Difference? 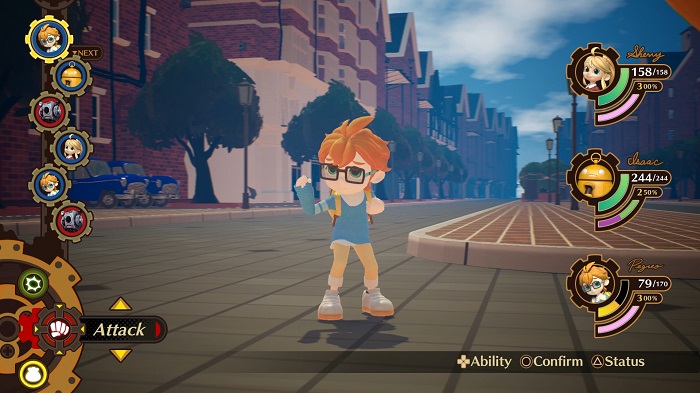 There’s nothing inherently wrong with Destiny Connect: Tick-Tock Travelers. Though the lack of voice acting and the art style may be a turn-off for some gamers.

Destiny Connect: Tick-Tock Travelers is not a bad game. Not by any stretch of the imagination. Everything in the preview build I played works and there are some interesting ideas in play here. In fact, the Famitsu scores can back-up that assertion. It looks like this will be a decent game. The main issues come from a few different areas.

First is the art style. Personally, I enjoy it and think it does add to the experience. However, it’s not going to be for everyone. Secondly, the combat could prove to be a bit difficult for more casual gamers. Having your entire party’s success hinge off one character is a risky move. Some games like the original Paper Mario do it well without creating a brutal game. Shin Megami Tensei conversely is made to be difficult. Where Destiny Connect falls on the spectrum, I’m not sure. The third issue though is for me the big one; the lack of voice acting.

What bothers me the most about this title is the missed opportunity this is. Voice acting is just one of those staples in games these days. If you’re not going to do it, then you either need a good reason or that needs to be reflected in the price of the game.

Now the good news is that Amazon is listing the PS4 version at $39.99. Which, I think is acceptable. The Nintendo Switch version, however, is $49.99. I know an increased price is normal for Switch titles, but I can’t see myself paying that much for a game like this with no voice acting. However, if you’re still on the fence then NIS America may be able to help here.

NIS America has actually streamed an hour-and-a-half of Destiny Connect: Tick-Tock Travelers on their Twitch.tv page. I recommend giving the VOD a watch to help you see for yourself if this game is something you might like. My only other advice would be to definitely wait for a review if you have any questions. A lot of the concerns regarding difficulty and story would be answered there. As a whole though, I think Destiny Connect: Tick-Tock­ ­Travelers does deserve a chance at least.

In the meantime, if you’re looking for more NIS America coverage, take a look at our Anime Expo hands-on of Trails of Cold Steel III. Or, consider looking at some of our other NIS America reviews for games such as Labyrinth of Refrain: Coven of Dusk and SNK 40th Anniversary Collection.

“Ground Control to Major Tom” Well, at this point I feel that I’m not eating crow for dinner after my last feature begging fans to give Mass Effect: Andromeda…