Rhinos and giraffes and gators, oh my! 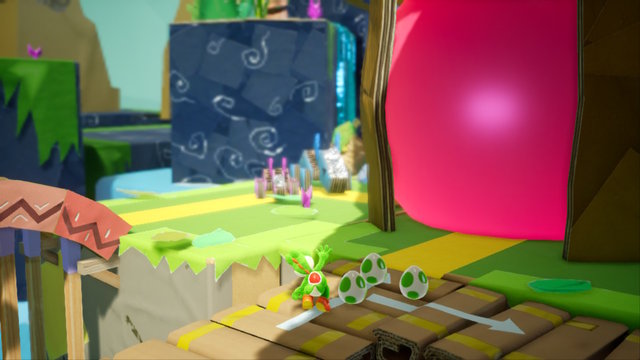 Exploring the Animal Kingdom, indeed — there’s no shortage of critters in this Yoshi’s Crafted World level! There’s plenty of tropical jungle hijinks threatening your quest of collecting every last Red Coin, Poochy Pup, Smiley Flower, and Souvenir, but Hey Poor Player’s guide has all the details. 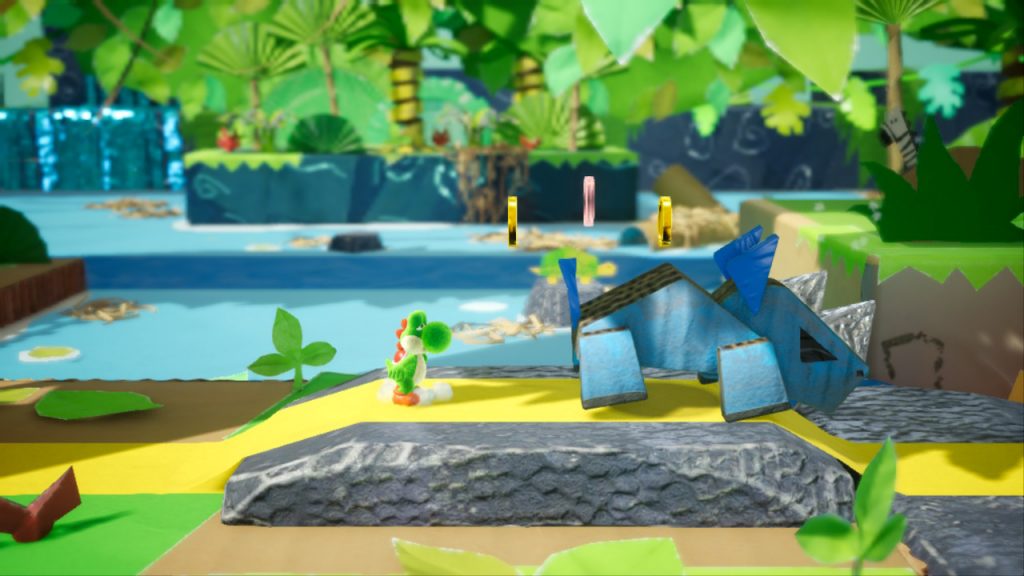 The first of the Red Coins is above the first pair of Shy Guys you come across (1/20), with four more hidden via an invisible cloud under this platform. (5/20) Another rests in the tower just above the baby giraffe (6/20), smack open the Golden Present while you’re running from the next rhino for another (7/20), pop open the Winged Cloud afterwards for two more (9/20), have the rhino smash through the brown boxes for the tenth (10/20), and finally in this hidden cloud at the end of the chase; no, Yoshi’s not being mauled to death there. (16/20) Finally, the last four are in this hidden cloud within the Piranha Plant lair where you recover one of the bridge parts. (20/20) 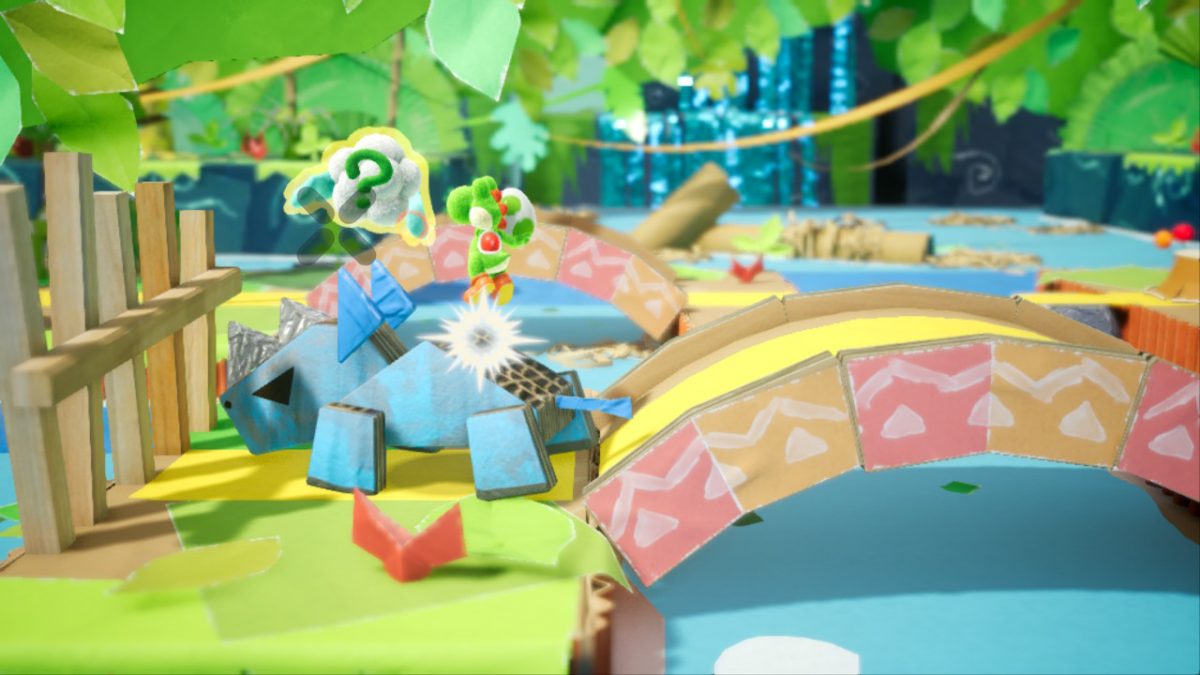 The first of the six Smiley Flowers is under heavy guard by the first Rhinoceros you come across — uncover the hidden cloud by luring him away (or, get adventerous like we did as seen above), then pop it open for the flower. (1/6) A Blue Clock Cloud presents a collection of Blue Coins across the pink ball bridge, so grab ’em all before time runs out! (2/6) The third one’s tricky, and it involves the second rhino rampage: lure the wild mammal over to the pink balls and let it charge through to uncover a hidden basement — therein lies your Smiley Flower! (3/6)

The fourth flower’s upon the koala cans where you play with magnets — place one on the rightmost can, climb up, then Flutter Jump over the other one to grab your flower. (4/6) You’ll come across a Red Clock Cloud right afterwards, so pop it and aim here for the correct flower. (5/6) The final flower’s in this hidden cloud after you reunite the mommy and baby rhinos — simply cross the bridge you just formed and hop around to find it. (6/6) 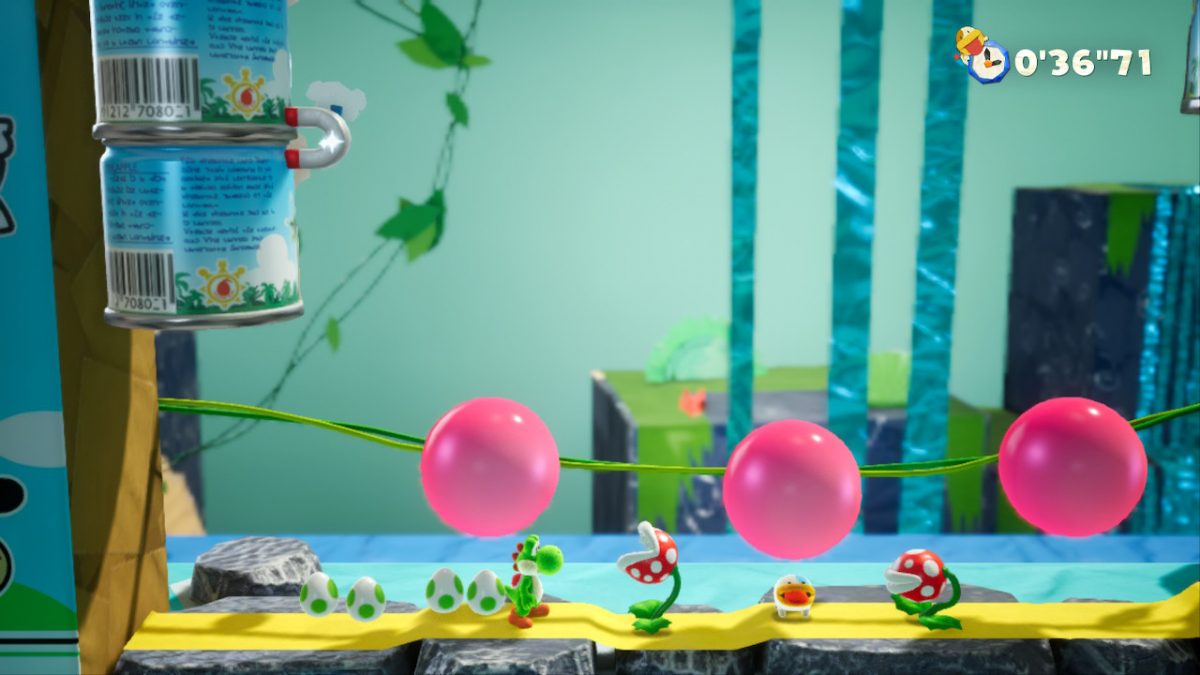 Oh no — those Poochy Pups fancy themselves tropical explorers? As seen above, they’re not cut out for the job — save the pupper from the two Piranha Plants, then rescue another puppy from hitching a ride upon an angry rhino. The third and final doggo’s hopping in-and-out of some hungry gator mouths by the baby giraffe; seriously, are they doing this on purpose?!? 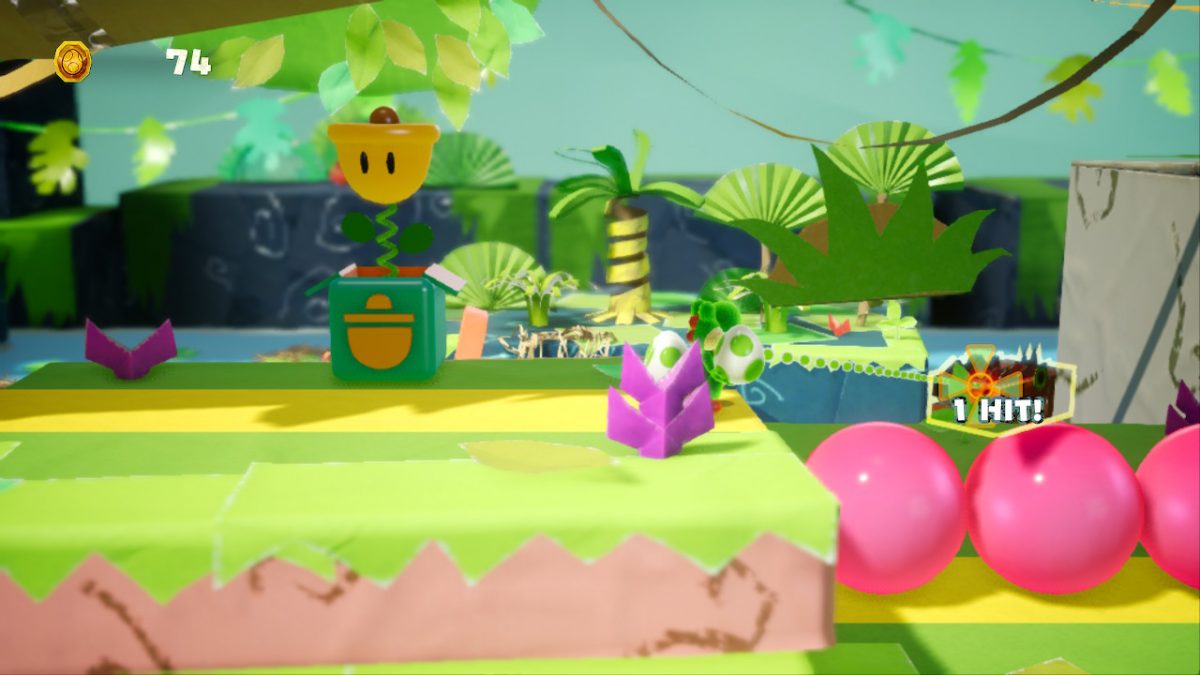 Orange Gator: As seen above, this sneaky gator’s hiding behind the second checkpoint.

Twisty Red Tree: Five of these trees are scattered across the jungle — the first is in the background by the Blue Clock Cloud, the second’s in the middle of the second rhino chase (use the Golden Present as your reference), the third at the end of said chase, the fourth’s visible here from the koala can with the Smiley Flower, and the fifth is here after reuniting the two rhinos.

Zebra: Just a reminder — this mammal’s hiding out in all three levels of Rumble Jungle, and as seen above, you can find this particular Zebra where you found the first Red Coin.

Roosting Tree: This bird-congregating tree’s found in Flipside, after you hop down from the first checkpoint.

And that’s it for Exploring the Animal Kingdom! Let us know in the comments if you have any further questions, but in the meantime, take a gander at our Yoshi’s Crafted World guide hub!