I kinda want these in my house now. 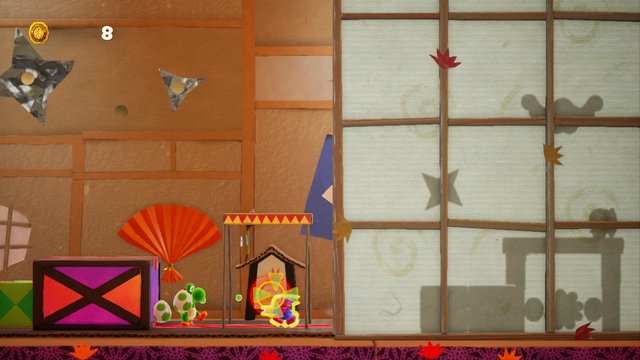 Yoshi’s Crafted World’s descent into Japanese culture continues with Behind the Shoji! The iconic translucent paper obscures the obstacles impeding poor Yoshi’s path, and to make matters worse, it’s an auto-scroll level! You’ll have to be quick on your feet to nab all the Red Coins, Poochy Pups, Smiley Flowers, and Souvenirs in this level, but we’ve got a detailed guide for you below. 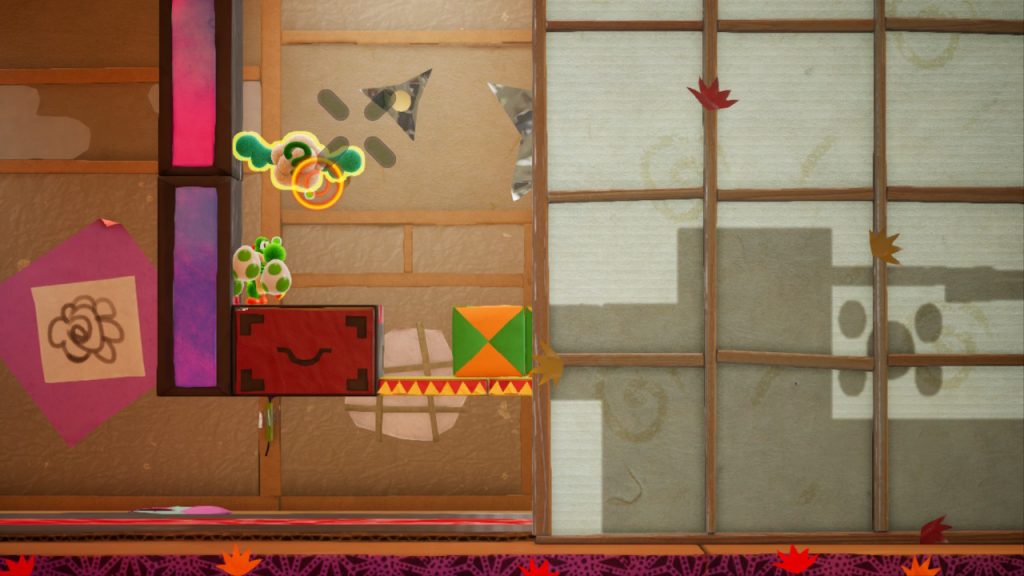 The very first Red Coin’s a hidden one, and it’s easy to miss — as seen above, you’ll find a secret winged cloud on the Japanese drawer the the lone Shy Guy’s guarding; pop it, then follow the trail of coins. (1/20; for reference, it’s just past the first Smiley Flower and before the first spinning Winged Cloud comes whizzing by.) Three more Red Coins await you beneath the wrapping paper rolls (4/20), two more within the coin collections by the first Piranha Plant you encounter, (6/20) and another two held by two Shy Guys walking waaay up on some paper boxes — ensure the wrapping paper isn’t unrolled beneath your feet as you Egg Toss at said boxes. (8/20) You’ll come across another large coin collection shortly after — two Red ones are located here, so navigate through the appropriate platforms and paper boxes as necessary. (10/20)

(11/20) Two more Red Coins are hidden behind a pair of upcoming paper boxes (13/20), and another in the Gold Present right behind said boxes. (14/20) Pop open the Winged Cloud soon after and collect the materialized coins for two more Red ones, (16/20) then sneak through the tiny tunnel behind the Piranha Plant and navigate the wrapping paper roll maze  (20/20) 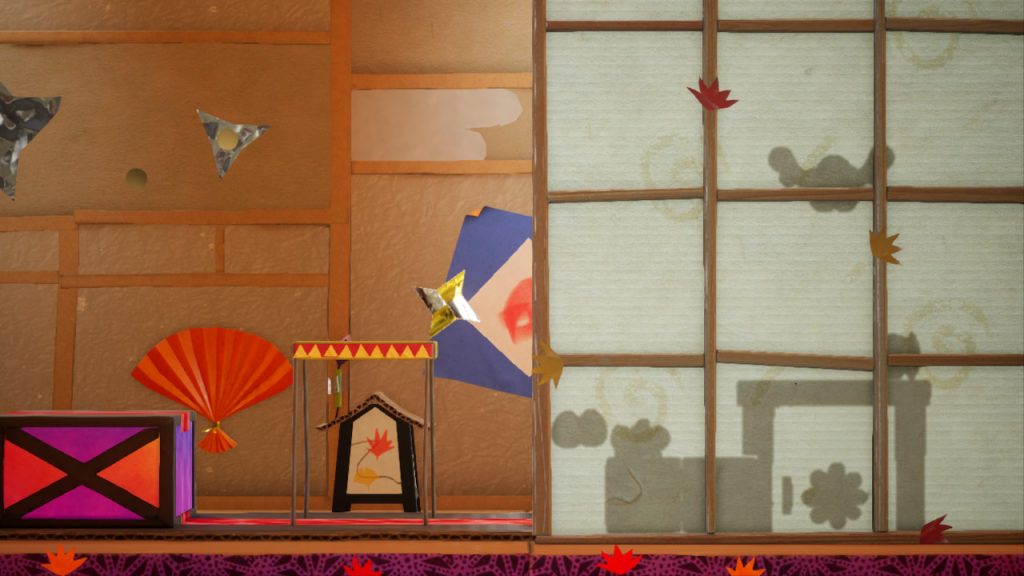 You’ll spot the first of Behind the Shoji’s six Smiley Flowers…well, Behind the Shoji. As seen above, its shadow appears underneath that platform soon after the level starts, so Ground Pound the paper boxes blocking your path and then grab it! (1/6) You’ll later spot another Smiley Flower accompanied by an eye-grabbing coin collection — Ground Pound through the paper boxes to nab ’em. (2/6) When you observe two Shy Guys walking upon some paper boxes up near the ceiling, keep an eye out for a Winged Cloud in the same area and Egg Toss at both the boxes/cloud, all the while taking care the wrapping paper beneath Yoshi doesn’t unroll towards deadly spikes. (3/6)

The next Flower’s found almost immediately underneath the mass coin collection — unless you haven’t grabbed the two Red Coins above, you can simply walk underneath and hop through the paper boxes to grab the flower. (4/6) Unroll the upcoming wrapping paper platforms for the next flower as you avoid the Shy Guys (5/6), and pop open the Blue Clock Cloud ahead for a Blue Coin-collecting mini-game — remember to Ground Pound the paper boxes for the final collection! (6/6) 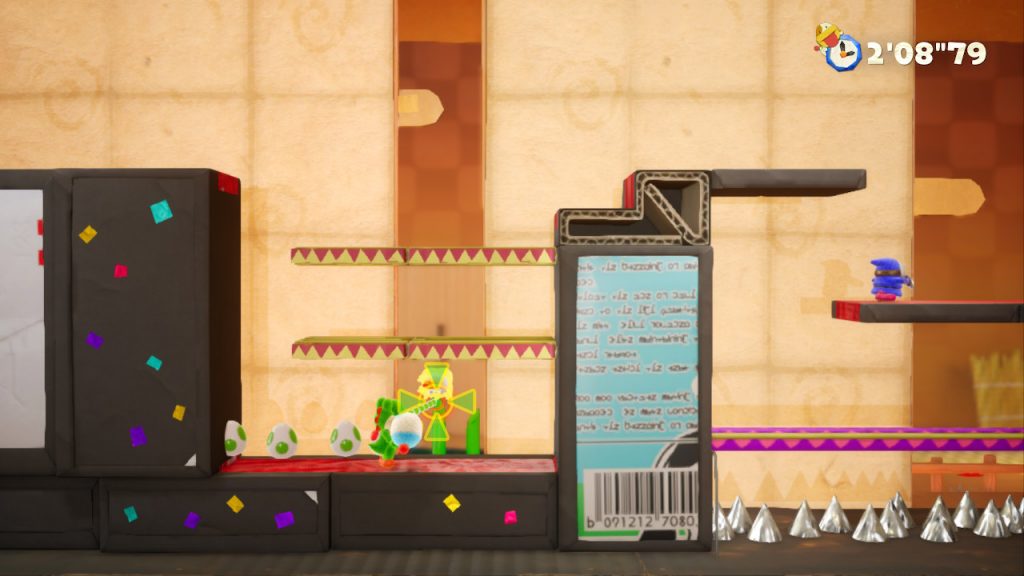 The Poochy Pups found themselves so fascinated with Japanese decor they got lost in the level’s Flipside! You’ll find the first one in plain sight within the wrapping paper roll maze, the second hanging upon some cloud props (you’ll only have a limited time to grab it — two shoji doors will close upon the poor feller!), and the third between these two shoji doors. (The thinnest of spaces, as you can see!) 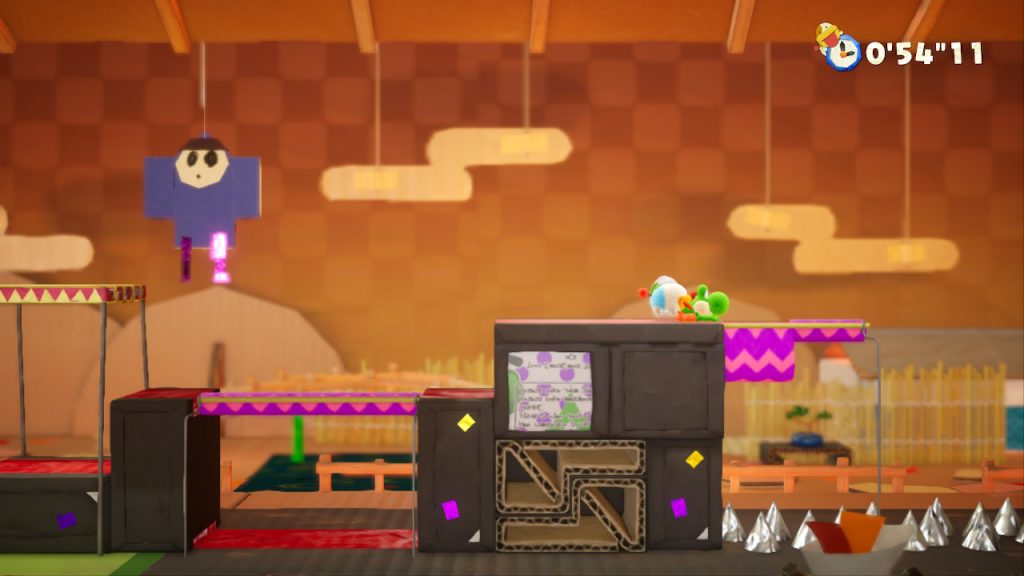 Japanese Lanterns: Three Lantern souvenirs for you to collect — the first is in plain sight soon after you start the level, the second after the second Smiley Flower, and the third above the fourth Smiley Flower. (Take the path where you found the two red coins.)

Bonsai Trees: Two of these miniature Japanese trees are in Flipside — the first rests by this spike pit (look by the first Shy Guy Kite; yes, you can aim from solid ground) and the second on the ground after the second Shy Guy kite.

And that’s it for Behind the Shoji! Let us know in the comments if you have any further questions, but in the meantime, take a gander at our Yoshi’s Crafted World guide hub!