No, really, there’s a LOT of jumping. 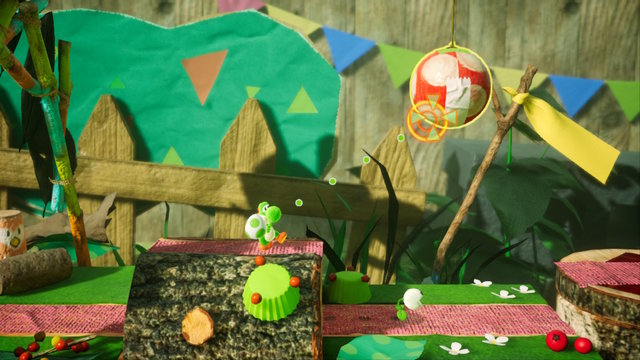 Jumping to Victory! Now there’s a level name that springs into action — with all the Bungee Plants stalking Yoshi, Ukikis hopping around, and fragile paper blocks decorating deep ponds, you’ll certainly be jumping for dear life. Thankfully, we at Hey Poor Player have documented all the Red Coins, Smiley Flowers, Poochy Pups, and Souvenirs you’ll need to collect within. 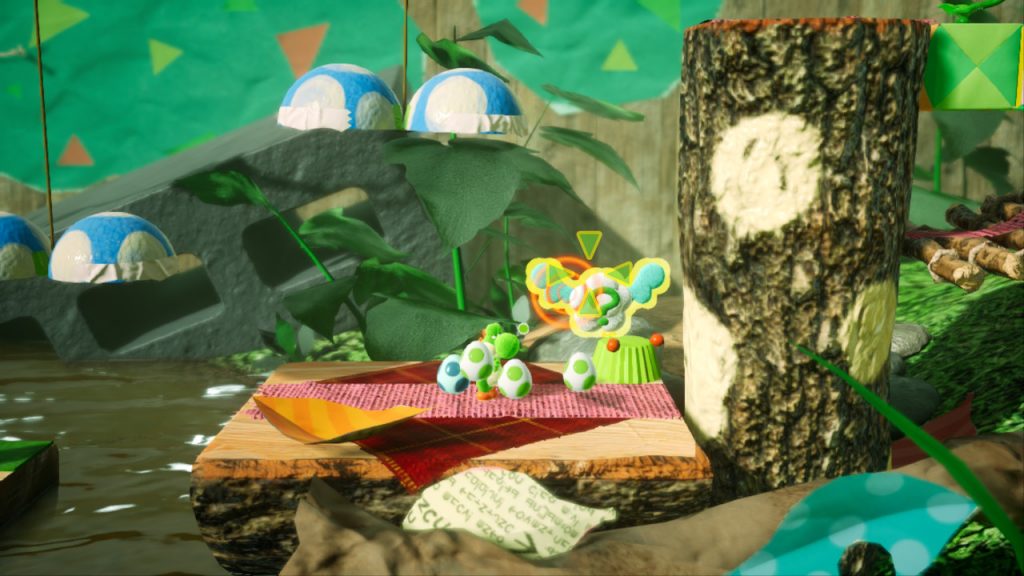 Your first four Red Coins can be easily overlooked — when you’re popping upon the blue party balls, walk under the third one as seen above and you’ll uncover a hidden Winged cloud; burst it open to nab those coins! (4/20) Sneak under this Ukiki to unveil a hidden cloud containing two more coins (6/20), then break down the blocks blocking the upcoming tree trunk’s interior to find another pair. (8/20) Grab the coin lying within the air-suspended trio just before the red party balls (9/20), then ascend said party balls and Ground Pound the uppermost one for five more. (14/20)

When you ascend to the very top of the vine-filled room, gaze upon this hole to spot a distant present — pop it open for another coin. (15/20) Some more suspended coins await amid the upcoming packs of Bungee Piranhas, with both collections hosting two Red Coins each. (19/20) The last coin happens to be the very final one you encounter in the level, although you’ll have to dodge more Bungee Plants as you dash across the paper boxes.  (20/20) 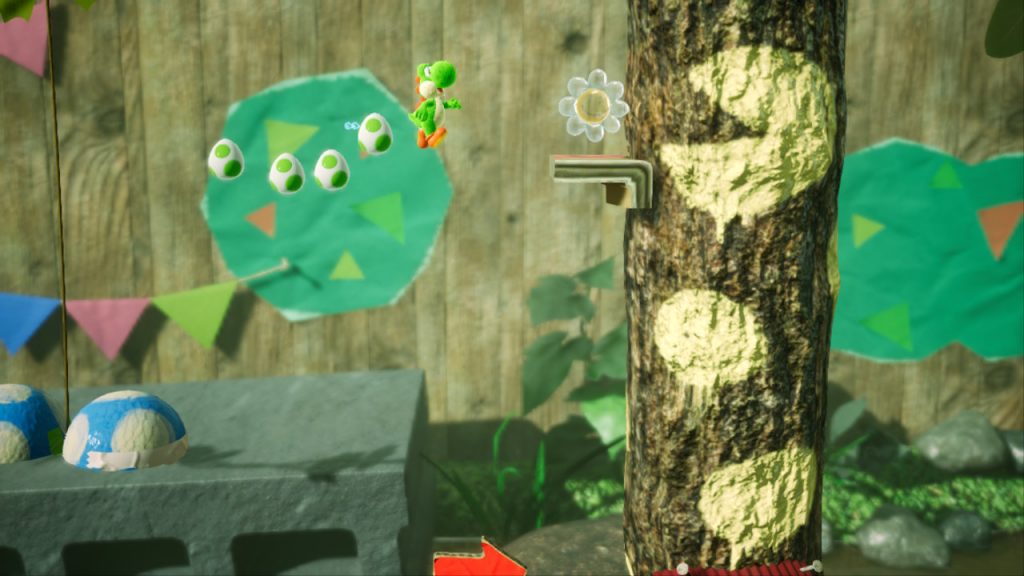 The first of this level’s eight Smiley Flowers is a tad tricky — when Yoshi’s hopping across the pond via blue party balls, you’ll notice the Smiley Flower hiding up upon an alcove as seen above. You could get adventurous and Flutter Jump like we did, but just FYI, you can just Egg Toss at it. (1/8) The next one’s also cleverly hidden: before the checkpoint, climb up the first of the many vines and Flutter Jump to your left for the platform hosting the flower, watching for the Piranha Plant all the while. (2/8) Ensure you have enough eggs before you smack the Red Clock Cloud, then snipe away at the three Monty Moles for the next flower. (3/8) You’ll find the next Smiley Flower resting beneath a pair of Bungee Piranhas, but there’s an easy away around that — Ground Pound the red party ball nearby to free an Ukiki and watch as the sneaky monkey nabs the Flower! Express your thanks by chasing him down and swallowing/Egg Tossing him. (4/8)

Pop open the Blue Clock Cloud afterwards and snag all the blue coins by utilizing the party ball lifts as necessary. (5/8) After that, climb up to the very top of the vine-filled room to find a Smiley Flower awaiting you at the very end. (6/8) As you’re dodging the Bungee Piranhas upon the fragile blocks, smack open this red party ball — it’ll sink into the pond, but eventually surface to reveal another flower. (7/8) The last flower’s heavily guarded by ravenous bungee Piranhas, so time your run-and-jumps so you can reach it. (8/8) 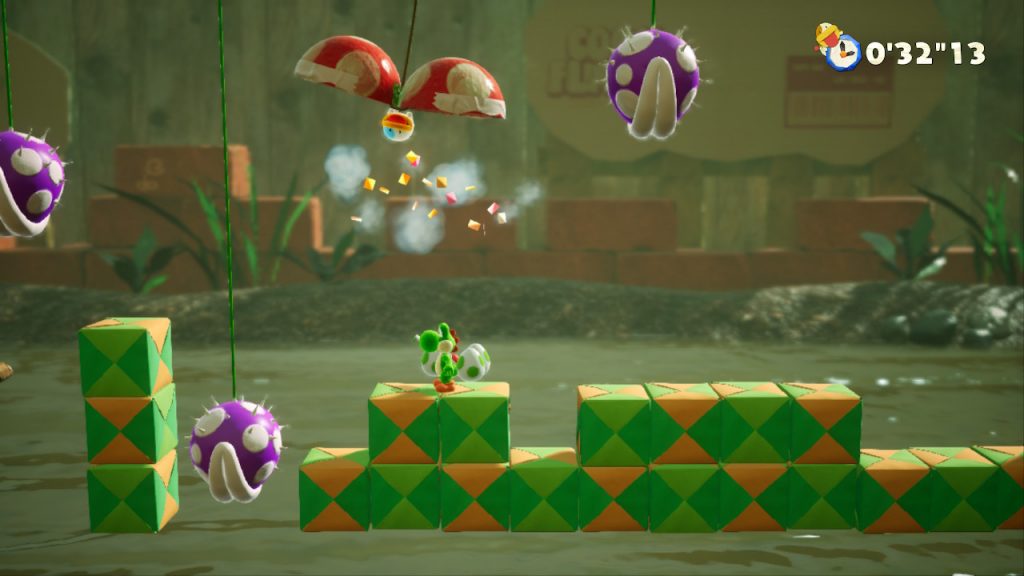 Yoshi’s not the only one Jumping to Victory — those dang Poochy Pups are hopping around the forest as well! The first is hiding within the red party ball above the paper block-filled pond, but even after you pop it open, he’ll continue clinging, so either Egg Toss or Flutter Jump above to jog him out! When you head into the Ukiki lair, you’ll find the next puppy upon climbing the highest vines. The third won’t be encountered until near the end, where you’ll find it swimming in the pond — use the final Blue Mushroom souvenir in the background as your reference. 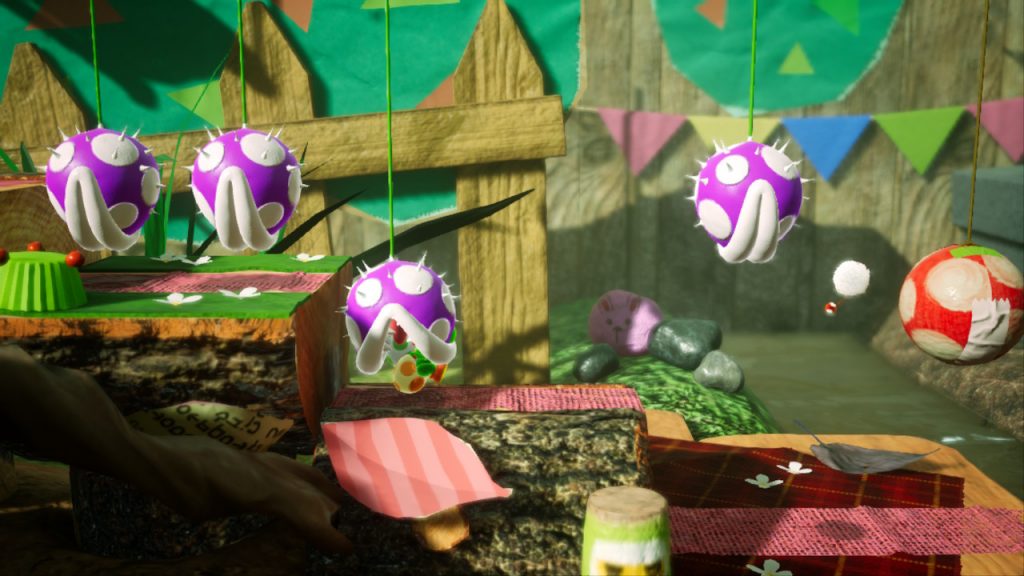 Rabbit Rock: As seen above, this souvenir rests behind a Bungee Plant pack after the first checkpoint. (No Yoshis were harmed in taking this screenshot. Really.)

Bear Rock: Remember where you found the two red coins in that tree trunk? The one covered by paper boxes? It’s visible in there.

And that’s it for Jumping to Victory! Give us a holler in the comments below if you have any further questions, but in the meantime, check out our Yoshi’s Crafted World guide hub!