Who’s up for elementary science class? 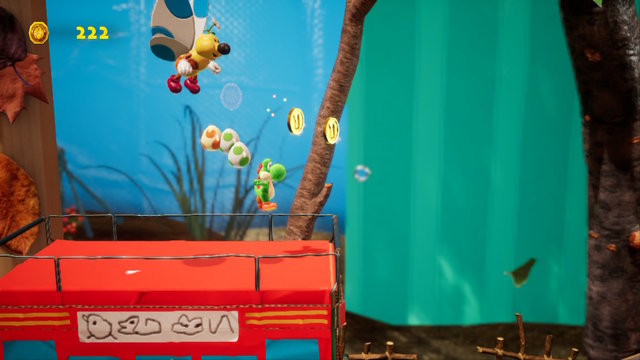 Exactly what it says on the tin can: Yoshi’ll require the help of acorn weights and wooden scales to traverse this tricky forest. Naturally, this process requires some serious brain-racking to uncover all the Red Coins, Smiley Flowers, Poochy Pups and Souvenirs; thankfully, we at Hey Poor Player have done your work for you. Let’s get into it! 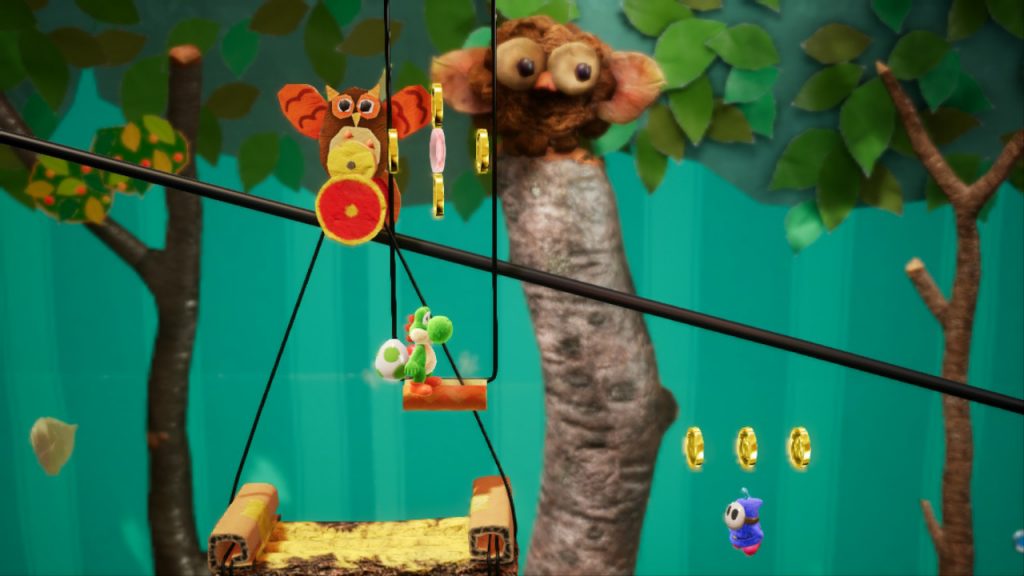 When you start the level, run under the big pink cardboard flower and jump through the coin ring to unveil a hidden cloud; pop it, then observe the coin rings that pop up — grab the red coins within, ensuring you grab the third above the Flutter. (3/20) Next, when you’re ascending the acorn scale, ensure the owl acorn’s placed in the left basket and make a run for the platform hosting two Red Coins. (5/20) When Yoshi’s ascending the platforms past the next scale, run through this spot to find a hidden cloud — pop it for four more coins. (9/20) After reaching the treetop, burst the cloud floating above the flowers for another three coins. (12/20)

Just before the lift, hop above the miniature wooden building and grab another coin. (13/20) Take a ride down, then grab a coin on the log mid-way through. (14/20) As you’re dodging the angry thistles down some ramps, take care in grabbing the floating coin (15/20), then smack the acorn formation in the background to reveal a gold present — unwrap it Egg Toss-style for another coin. (16/20) The next two coins are easily missed — upon your arrival at the white flower garden, bounce upon the Flutter and ride it towards a hidden platform. (18/20) When you’re riding the bus, you’ll pass by certain Flutters accompanied by trails of floating coins, with the first and third hosting red ones. (20/20) 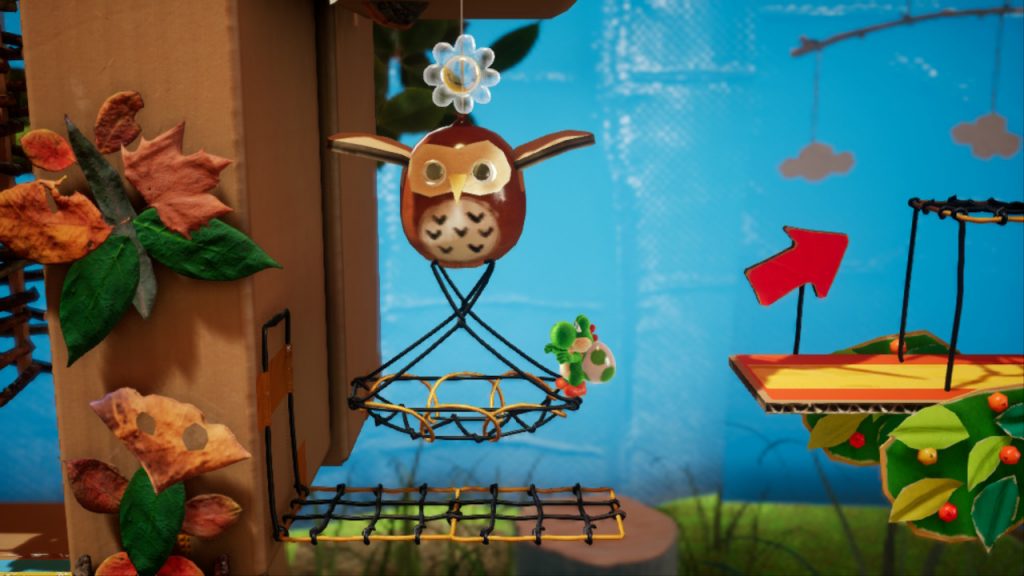 A sneaky owl’s hoarding a Smiley Flower all for himself! Finders keepers, you may, but for the sake of 100% completion, this atrocity must not stand! Said owl lingers after the second scale — snatch an acorn nearby and burp it into its basket to pull it downwards, then grab the flower. (1/7) When you reach the treetop shortly afterwards, ruin the Flutter’s day by pretending he’s a trampoline, then marvel with wonder as its newfound rage ascends Yoshi into a hidden Smiley Flower lair. (2/7) After the lift, pop the Red Clock Cloud and aim for the middle cloud for its flower (3/7), then run up the topmost thistle ramp for the fourth flower. (4/7)

For the fifth flower, frolic around the white flower ground to discover a Blue Clock Clock, which hosts an apple-eating game — eat all five to earn your Smiley Flower. (5/7) As you’re gathering the bus parts, head up to the very tippy-top here to reveal a hidden cloud with another flower; for reference, it’s just above the thistle owls. (6/7) Finally, when riding the bus, aim for the flower trailing the second Flutter. (7/7) 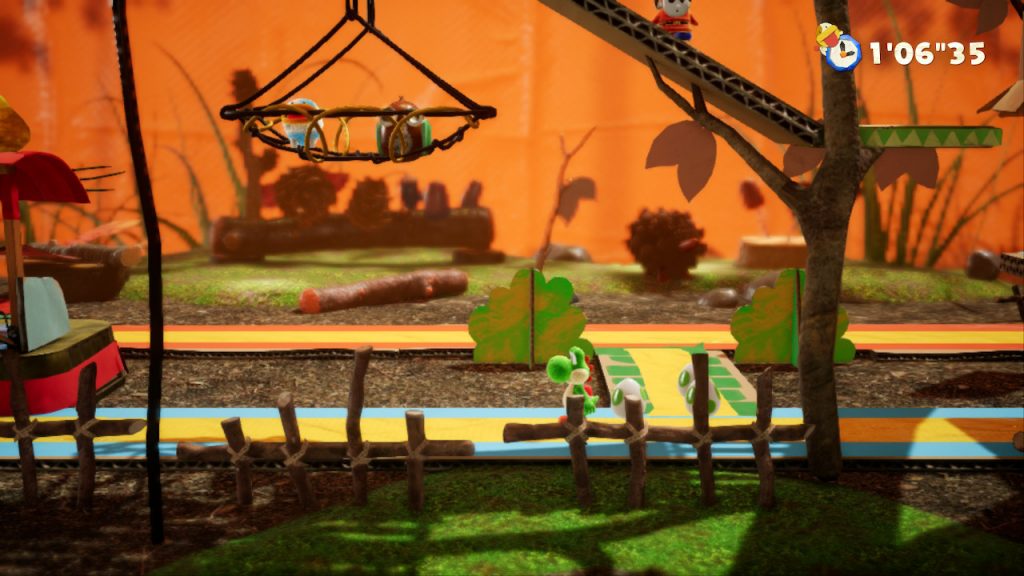 The Poochy Pups have run off to fiddle about with acorns during the setting sun — time for them to come home! As seen above, our first doggy’s playing in the yard where you assembled the bus. Next, just before you reach the first checkpoint, ascend the thistle ramps to stumble upon the second puppy. For your third and last doggo, you’ll run into it trapped on a stick wall as you run down the final scale. 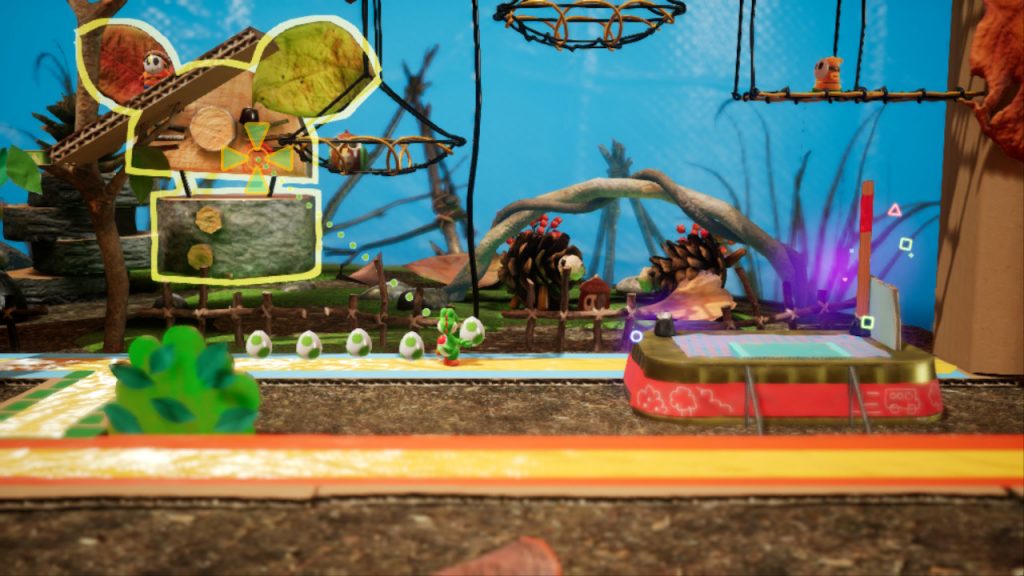 Organic Mouse: As seen above, this work of art’s just behind the bus station.

Shy Guy Acorns: Five of these decorated acorns are hanging about this level. The first is found on this tree at the very beginning, the second nestled in the leaves of the treetop past the first scale, the third in front of the white flower garden (use the Blue Clock Cloud as a reference point), the fourth behind the bus station here, and the fifth in front of the goal.

Wooden Lion: This sneaky Flipside souvenir’s found during the second lift ride. As seen here, it can be difficult to snag, so you may wanna steady your position with a Flutter Jump.

And that’s all for Weighing Acorns! Give us a holler in the comments if you have any further questions, but in the meantime, check out our Yoshi’s Crafted World Guide hub!