The Way of the Ninja — Breaking Down Doors 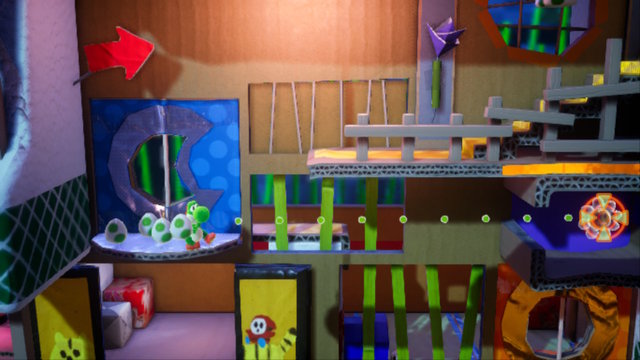 Urgent message from up-top: we’re short on funds, and with the Shy Guy daimyo lords hoarding treasure of unimaginable wealth, we request expert stealth tactics to perform an epic heist. Your mission: to snag every last Red Coin, Smiley Flower, Poochy Pup, and Souvenir stowed away within these sneaky confines. Succeed, and you will go down in Ninja Yoshi history! 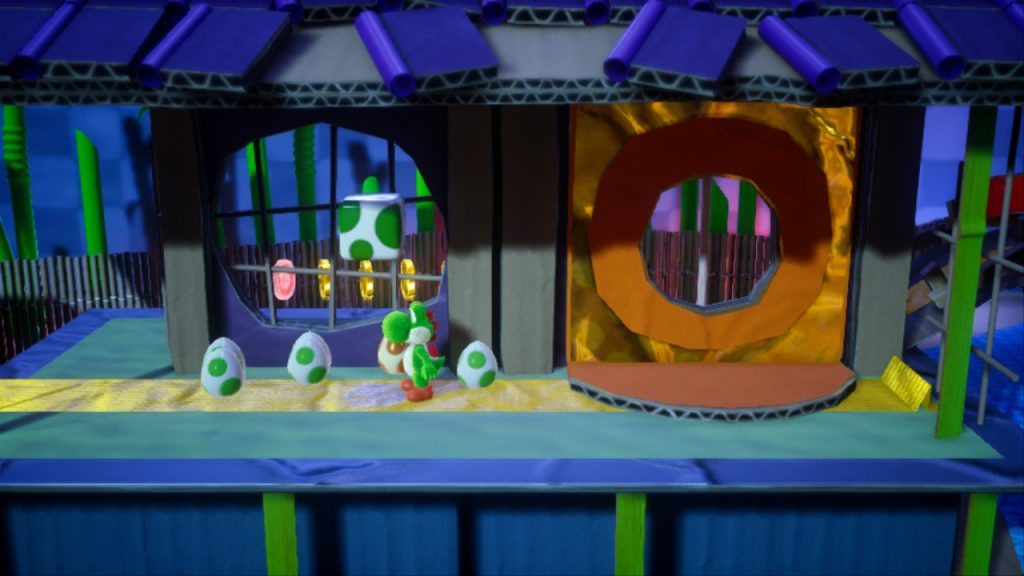 Just as you begin your infiltration mission, you’ll notice a trail of coins in the first mansion’s window — navigate around the revolving door, and grab ’em all to nab your first Red Coin. (1/20) As you’re creeping into the garden, crawl under the second big bamboo and pop the cloud within to spawn three more Red Coins. (4/20) Sneak along until you reach the checkpoint and open up the revolving door with an egg, then clamber upon it to discover a hidden cloud — pop it for four more coins. (8/20) Slink about until you spot a Shy Guy hiding behind a folding screen — rub him out for another coin, (9/20), then pop open the Gold Present just underneath for another. (10/20)

After solving the annoying key puzzle, you’ll locate three more coins in the first door just ahead — assassinate the Shy Guys if you must. (13/20) Stealthily hop onto the roof and jump around by this Egg Block to uncover another cloud hosting more coins. (16/20) Your mission concludes when you uncover this hidden cloud in the final revolving door room. (20/20) 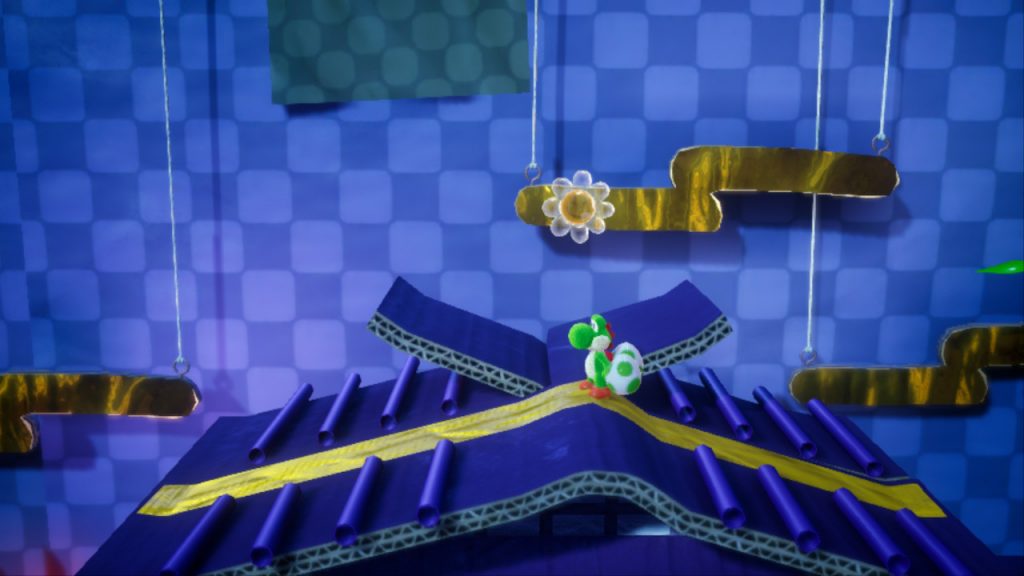 As you’re doing your best ninja roofhopping impression, you’ll find the first Smiley Flower atop the second mansion, as seen above. (1/6) Navigate through the revolving doors of the next building, then aim for the Smiley Flower-hosting niche via the second door’s platform. (2/6) Climb onto the roof and pop the Red Clock Cloud you see there — when the mini-game starts, aim for the fifth cloud as seen here to unveil its flower. (3/6) Pop the Blue Clock Cloud down in the bamboo garden and eat all four apples for the next one (4/6), then sneak into the next building and Egg Toss the blue revolving door within for the fifth flower. (5/6) Your sixth and final flower is in the second door just past the key puzzle. (6/6) 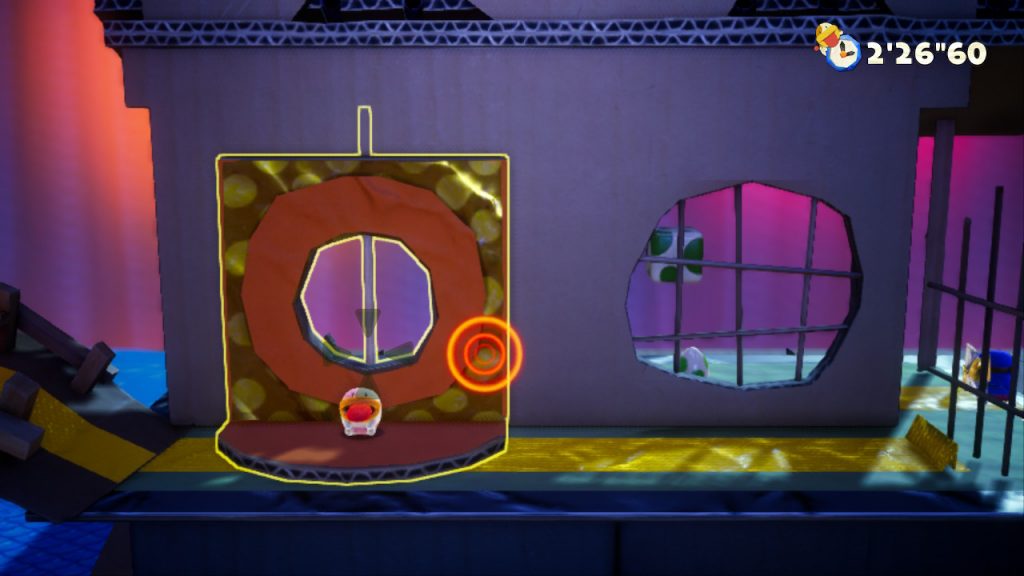 Three not-so-innocent puppies threaten to compromise your mission, so you have no choice but to traverse the level’s Flipside version and collect them. You’ll find the first where you located the key — Egg Toss at the blue revolving door obscuring the basement entrance, then follow the Poochy Pup through the secret entrance out. You’ll eventually spot the second after the checkpoint, hanging for dear life upon a lightbulb — enter via revolving door below and navigate your way to the top to Egg Toss it. Finally, the last puppy’s behind the last revolving door, but you’ll need to smack it so it comes to your side. (In other words, don’t stand on the door platform while you Egg Toss it; otherwise, it’ll simply switch to the other side!) 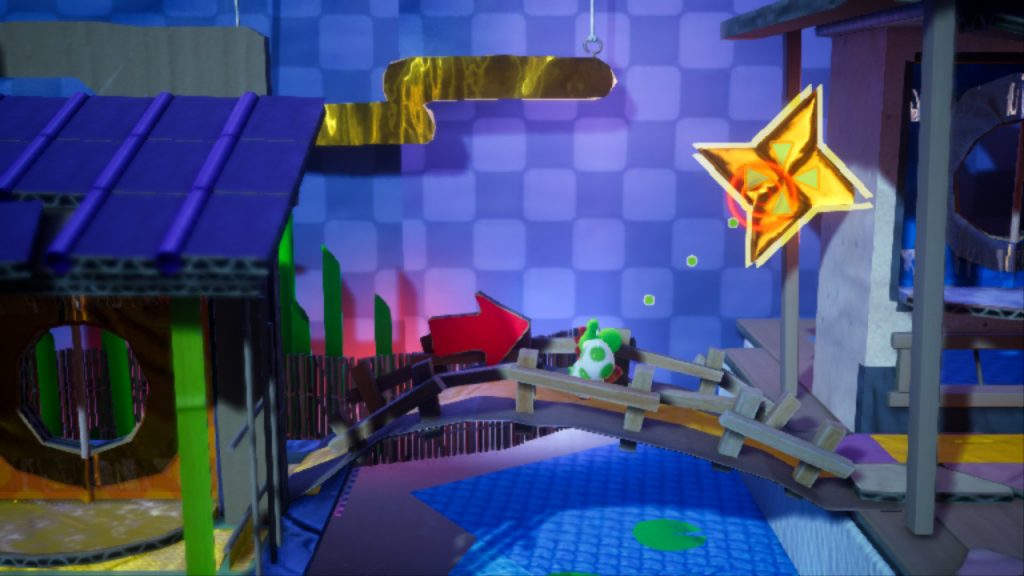 Gold Shurikens: What your Blockafellar superiors require from these souvenirs is strictly confidential, but regardless, five of these oversized ninja stars are found littered across the stage. The first is in plain sight embedded into the second mansion, the second within a bamboo just below a Winged Cloud (for reference, a Blue Clock Cloud is nearby), the third behind a pair of tiger-painted doors (it’ll open automatically within the second mansion past the first checkpoint), the fourth by this Egg Block past the key puzzle, and the fifth right at the goal.

Paper-Lantern Ghost: This beautiful lantern’s found just outside where you nab the first Poochy Pup in the Flipside version.

Your Deceptive Doors mission is complete! Feel free to request further intel in the comments below, but in the meantime, check out our Yoshi’s Crafted World guide hub!