Roguelikes Have Been Seeing Something of a Renaissance over the Last Few Years. So, What Sets Team Horay’s Dungreed Apart from the Others? Well, the Dungeon Eats You for One Thing. 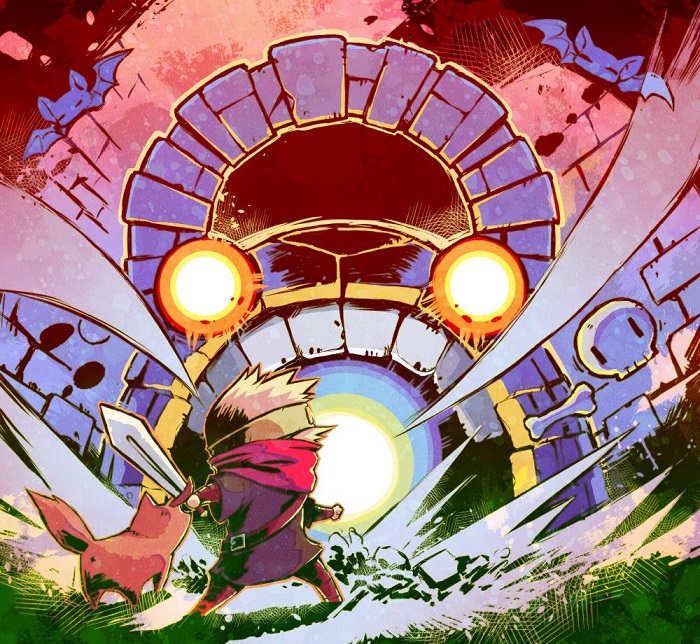 A boy and his dog are all that stand between a village and a very hungry dungeon.

Roguelikes are not a go-to genre for me. The notion of having to relearn the layout of an area or restart my grind from level one is not something that generally appeals to me. However, I can see why others do enjoy the genre.

The idea of a game that is constantly changing is appealing. There’s always the chance for something unpredictable to occur and the part of the fun comes from being able to react to these challenges. In addition, roguelikes also do have patterns to them. Just go watch any speedrun of a roguelike and you’ll see what I mean. RNG plays a role, but the skill of the player is the real determining factor of a roguelike. Well, that and game design. Which brings us to this article’s game in question: Dungreed.

Time to Delve into the Belly of the Dungeon

Nicalis, the company that’s brought you many cult-classics you’ve either played or have never heard of.

Dungreed is a game being published for the Nintendo Switch and PS4 by Nicalis and is developed by Team Horay; who have already released Dungreed on Steam. Nicalis is known for publishing several fan-favorite games such as Cave Story+, Umihara Kawase Fresh, and Code of Princess EX. As you can gather from those titles, they tend to focus on either indie or niche game titles; which is a good thing. There aren’t enough publishers who are willing to delve in indie games. Dungreed certainly has that indie feel to it.

The premise of Dungreed is a simple but classic one. You are an adventurer tasked with exploring an ever-changing dungeon in order to save a village. Oh yes, and when entering the dungeon, it eats you. That kind of bizarre logic is usually something I can get behind. Couple this with retro-inspired pixel-art graphics and this might be a game I could get behind. So, how’d the demo go? Well, let’s start with the overall feel.

Swords, Dogs with Guns, and Co-op 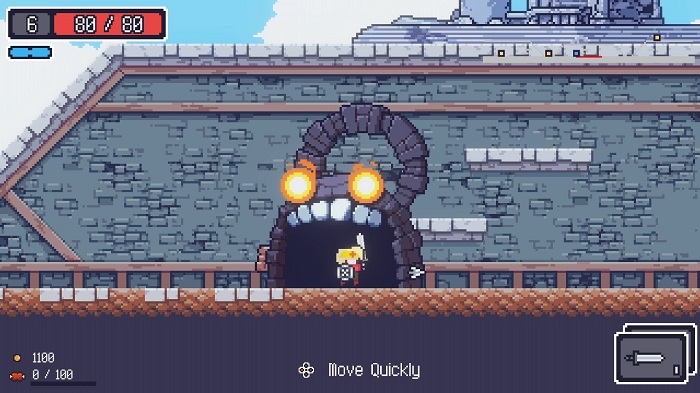 People sometimes claim that a game will eat you alive. Dungreed decided to take that literally in this case.

As a whole, I get the idea behind Dungreed. Get eaten by the dungeon, then make your way through it. My method was to try and clear each room I came across, though in some cases running away from enemies might be better. Remember, if you die it’s back to the surface with you and the dungeon will randomize itself again. This means survival is important. Though not always an easy task.

My character was armed with a sword while my partner (I was playing co-op) was a dog with a gun. Again, this insanity is something I adore about video games. However, this really illustrated the difference in weapons to me. Each press of the ZR button would swing my sword. First up, then down. 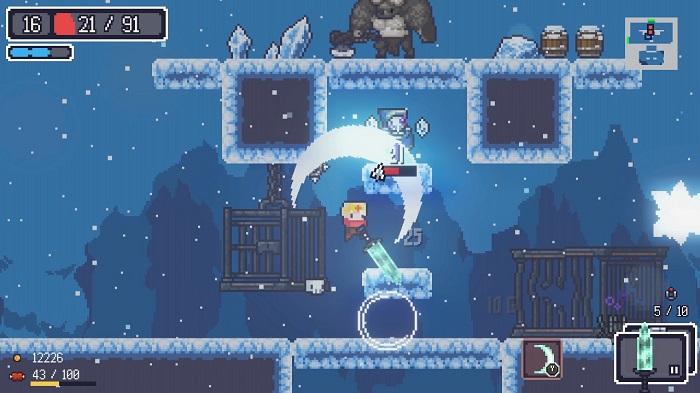 Rather than swing your sword the same way each time, your character will swing up, then down. Each press of the attack button alternates the swing.

This meant I had to keep the timing of swings and the position of my enemies in mind. The gun, conversely, had much more utility since it could just be aimed. As such, I found myself often struggling to attack enemies, while my partner had a much easier time. However, it wasn’t just the difference in the weapons that caused me to struggle. More prominently, it was the act of jumping.

Pull the Trigger to Jump? What? 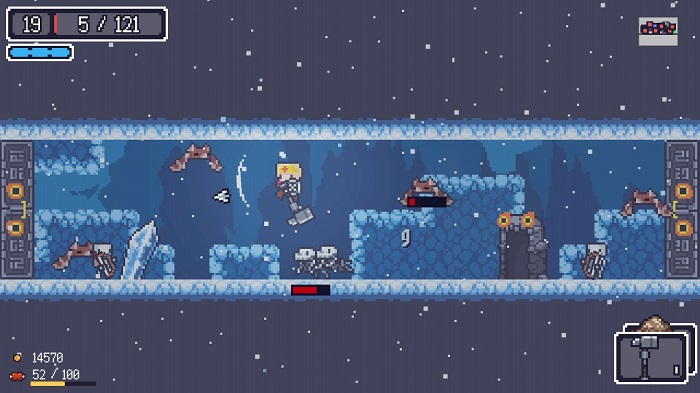 Tight corridors like this require pixel precision placement of the player in order to minimize damage taken. That’s a little hard when jumping is mapped to a trigger which just feels unnatural.

For some reason, the ZL button was used to jump. Yes, the trigger button. I can understand mapping an attack to one of the triggers. But mapping jump? It’s really awkward. In fact, I can’t think of a single other game that uses a shoulder or trigger button for jumping. I know it might sound odd, but this really threw my gameplay off. Trying to jump and swing the sword often resulted in me just ramming my face into the enemy. Suffice to say, this didn’t work for me.

My partner and I tried to advance through the game a few times, but we kept ending up as food for the ever-hungry dungeon. The controls were just a bit too awkward for either of us. While the gun helped my partner stay alive, you still need to jump to dodge certain attacks or enemies. And that often resulted in them taking damage and both of us being dead. Thus, we’d end up back at the surface to try again. In the end, it just felt like we were fighting the controls. So, where does that leave Dungreed then?

A Dungeon Delver in Need of Some Minor Tweaking 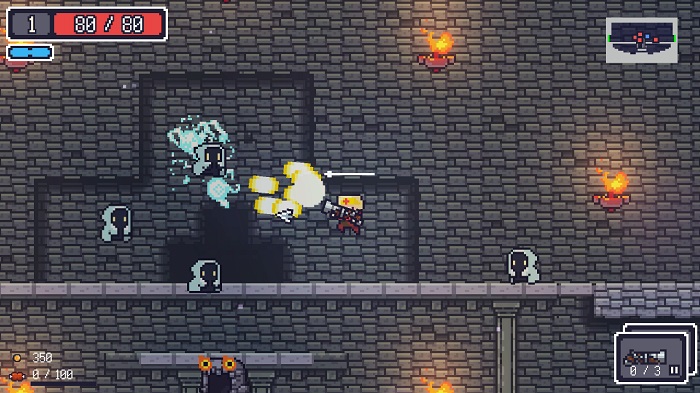 I want to stress that Dungreed looks to be a really creative and aesthetically interesting title. It’s just that I find the controls personally awkward. If nothing else, take a look at the awesome trailer below and make a decision for yourself.

I want to stress that this is a demo build and the controls could be remapped by the final release. So, if you find this game interesting, then I implore you to check out a couple of reviews once it drops to see if any other reviewer found the controls to be an issue. Or give the Steam version a try. As for me personally, though, this would be a deal-breaker. Jump should not be a shoulder/trigger button. It just feels way too awkward for me. Sure, the face buttons were being used for something else, but clever game design should account for that. I’m sure there’s a way to fix this.

Dungreed is out now on Steam and will be released in the future for the Nintendo Switch and PS4.