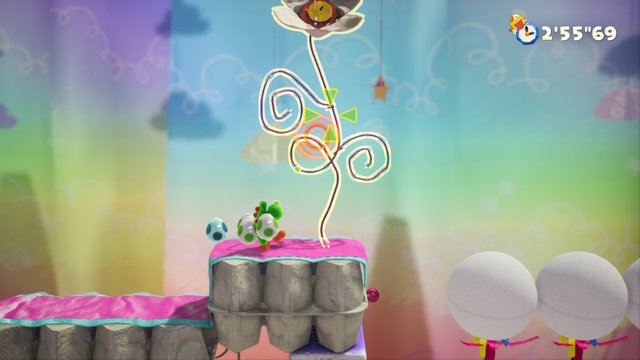 Sky-High Heights ends with a lovely rose-colored sunset in Windward Way, populated by Goonies soaring and waddling about the gusty mountains. Of course, we’re not here to appreciate the scenery; nay, we’ve got collectibles to nab! Be it Red Coins, Smiley Flowers, Poochy Pups, or Red Coins, Hey Poor Player’s got the goods. 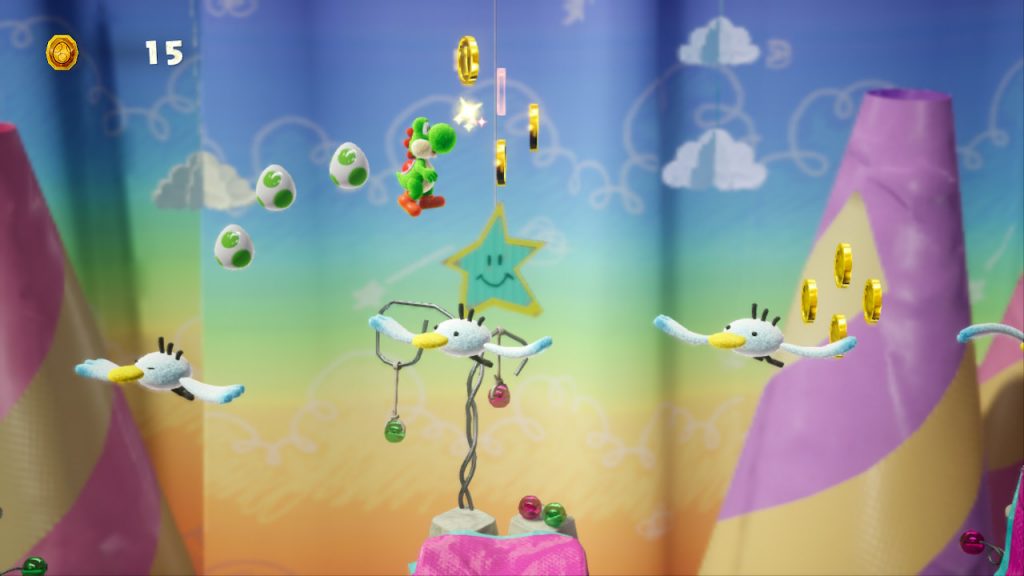 When you first encounter the Goonie gulls, hop into the middle diamond coin formation as seen above to earn your first Red Coin. (1/20) Smack the Winged Cloud shortly afterward for three more. (4/20) Just before the checkpoint, you’ll spot a trio of Fly Guys; the bottom one has the coin, so carefully aim an egg at ‘im. (5/20) As you’re navigating the incoming Goonie flock, descend downwards and grab two more coins hiding among the suspended collection. (7/20) Smack the background present after crossing the next round of gusty balls (for reference, if you popped the Blue Clock Cloud, look around after you’ve collected the blue coins) (8/20), then Flutter Jump off the final big ball for a platform hosting three more. (11/20)

As you walk down the next path, travel through this spot to uncover a hidden cloud — pop it to uncover three more coins. (14/20) Grab the next two coins among the next Goonie flock here (16/20), then keep watch for an upcoming Fly Guy carrying another coin. (17/20) Finally, grab the last three here just before the goal. (20/20) 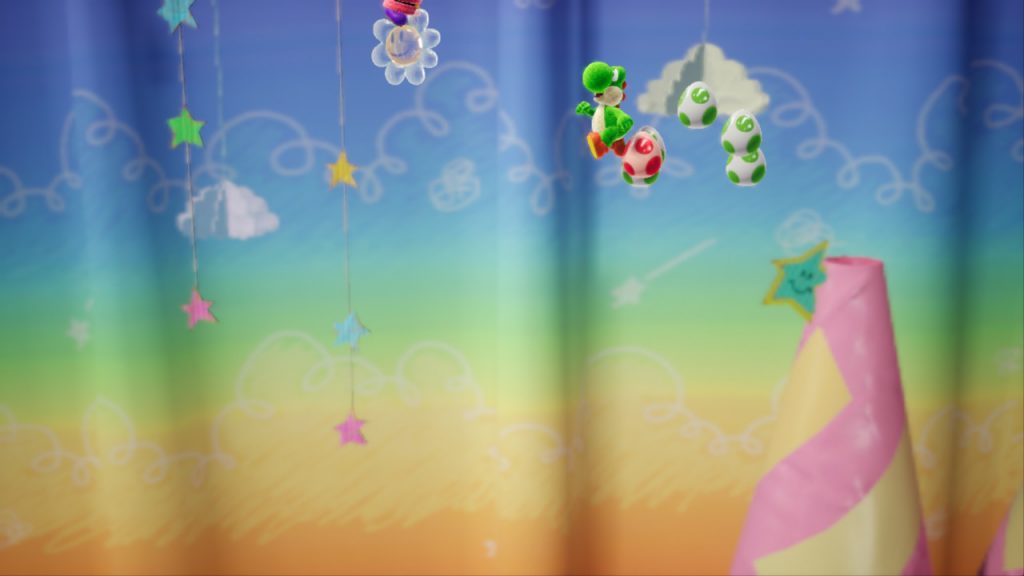 Just before the checkpoint, hitch a ride on the middle gusty ball and spot the Fly Guy carrying the Smiley Flower at the verrryyyy top of the screen. (1/8) After you’ve grabbed that sucker, your next flower awaits among the Goonie flock past the checkpoint. (2/8) You’ll eventually come across a Blue Clock Cloud; pop it, then simply run and flutter along the balls as you collect all the blue coins. (3/8) Next up is a Red Coin Cloud — ensure you’ve defeated all the nearby Goonies, then pop it and aim for this flower. Didya notice how they form the shape of a seagull? (4/8)

Afterwards, hop up the incoming nests and pop the cloud on the third one here (5/8), then pop the Blue Clock Cloud within the next Goonie flock and toss eggs at all four balloons for the next flower. (6/8) The next one’s tricky: after the next checkpoint, look for a ball accompanied by pink tassels, then ride its gust-propelled ascent to spot this flower-carrying Fly Guy. (7/8) Finally, Flutter Jump through the coin collection here to uncover another flower-hosting Winged Cloud. (8/8) 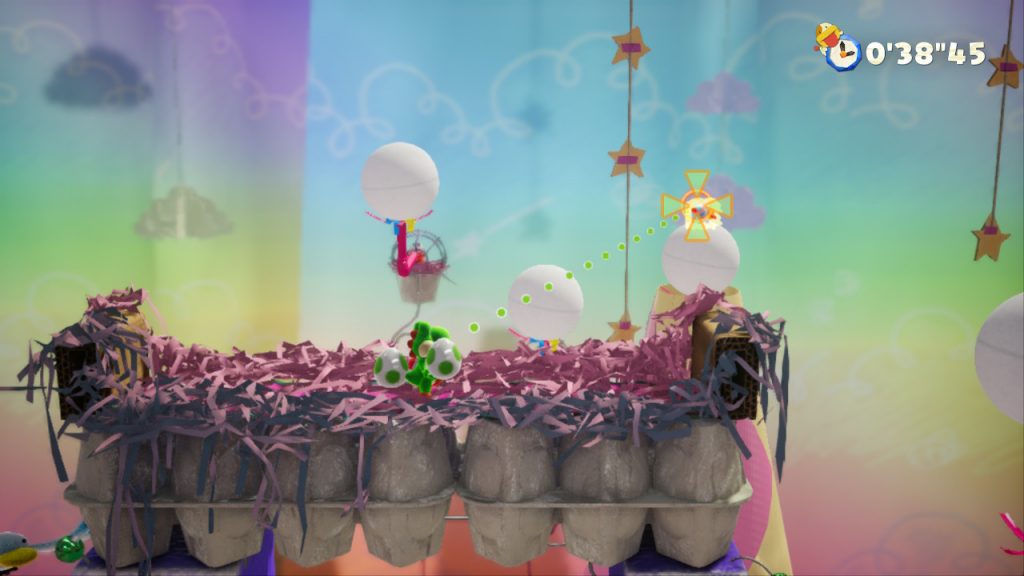 For the Poochy Pups’ sky-high escapade, proceed through the level until you reach the first nest — as seen above, our first pupper’s hopping around in the background, so aim a well-placed Egg Toss to grab ’em! For the second Poochy Pup, remember the Blue Clock Cloud with all the fake Smiley Flowers? You’ll eventually run into those again, with the next puppy frolicking in the nest next to them. The third and final Poochy Pup can be easily missed — after the second checkpoint, scan the skies following the nest for a flying doggo! 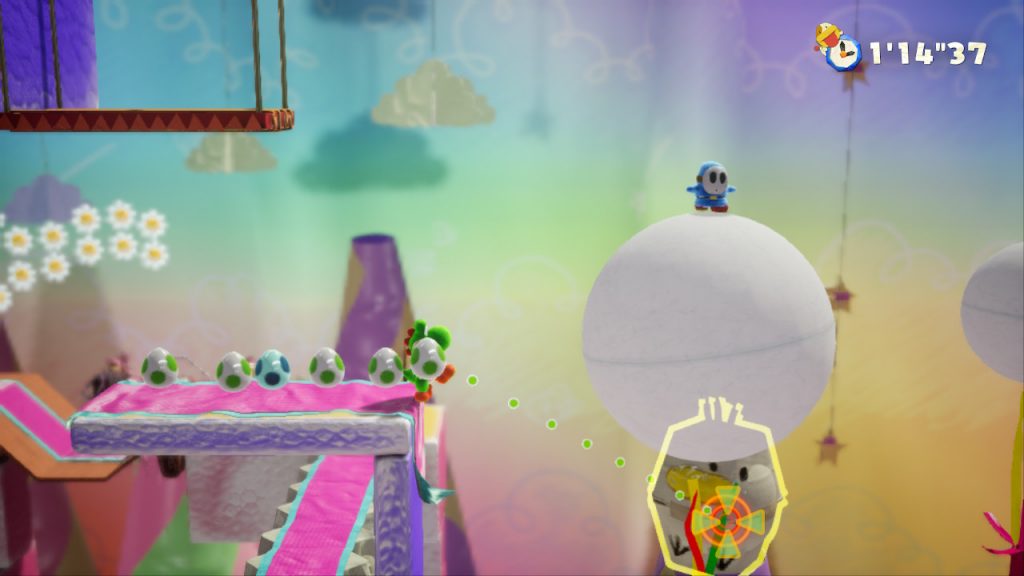 Egg Carton Flightless Goonie: In the Flipside version, run past the collection of Fake Smiley Flowers and, just before the gusty ball section, aim for the conspicuous Goonie carton you see above.

Smiling Stars: Five of these are hanging around in regular ol’ Windward Way. The first is hanging in plain sight behind the first Goonie, the second’s embedded in a pink mountain just under the first Smiley Flower, the third’s plastered on a wall by the Red Clock Flower, the fourth’s stealthily peeking from another mountain behind the second checkpoint, and the fifth shooting down just by the goal.

And that’s it for Windward Way! Let us know in the comments if you have any further questions, but in the meantime, check out our Yoshi’s Crafted World guide hub!