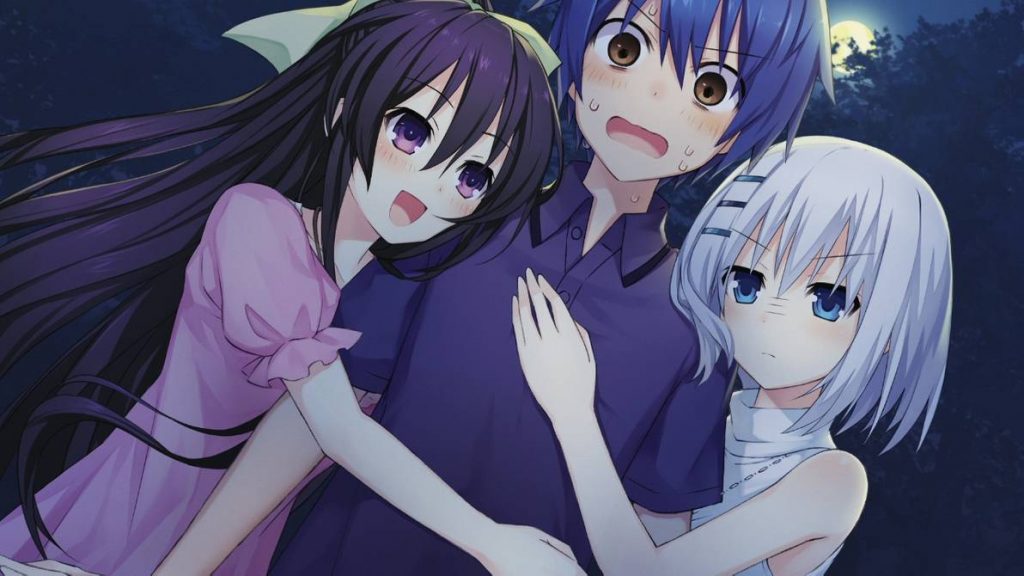 The Date A Live franchise has been going strong for almost a decade now. However, if you’ve been living outside of Japan, you might not realize that to be the case. Sure, we’ve gotten the anime adaptation, and… actually, I think that’s about all we’ve gotten. Huh, we’re more behind than I realized. No matter, though, because that’s all going to change — for today, I bring you Date A Live: Rio Reincarnation! And, despite what you might think, this is a pretty big deal for series fans.

Now, to be clear, Rio Reincarnation isn’t a game. It’s actually a three-in-one title containing every Date A Live game released to this date. Technically speaking this game isn’t “new” in the traditional sense. Rio Reincarnation itself was released in Japan back in 2015, with two of the games included within it having already been released previously. So, while I’m sure that it was exciting for Japanese fans, its existence might mean just a little bit more to us Western fans due to the fact that we’ve never gotten the chance to play any of the games included within this collection. Not only does Rio Reincarnation‘s release finally alleviate this problem, allowing the rest of the world to catch up just a little bit, but it also finally gives series fans a chance to interact with their favorite Date A Live characters like never before. And that’s really a great thing because these games are a lot of fun. 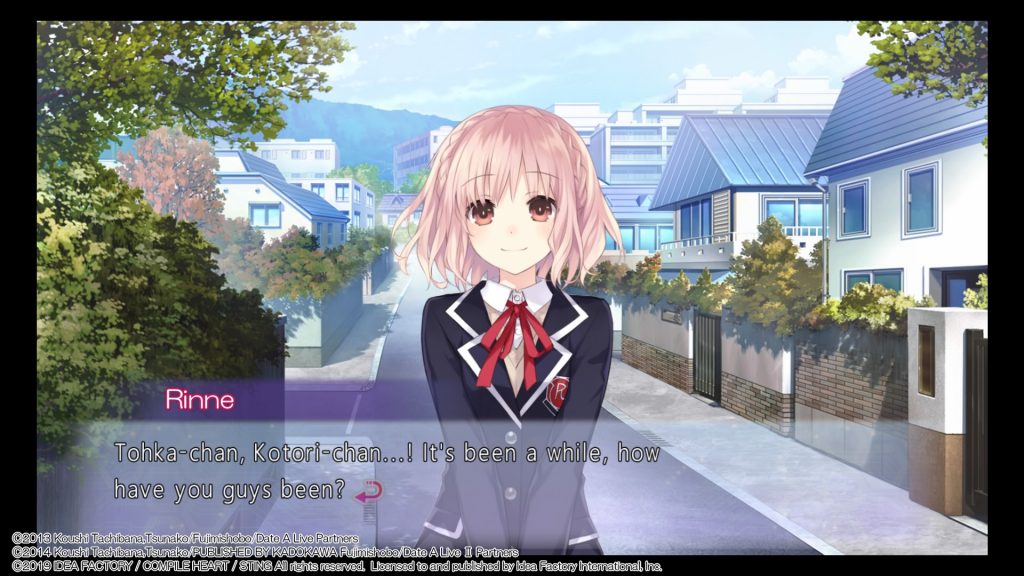 Rinne may be new, but she fits in with the rest of the cast like she’s been there all along.

As I’ve already explained, Date A Live: Rio Reincarnation contains three completely separate games, with three completely separate stories. Because of that, I probably won’t be able to go as in-depth with narrative exploration as I normally do in these segments. But, what I can do, at the very least, is provide a brief synopsis of each. I’ll also be using the anime to reference things, because that’s literally all we’ve got (sorry, manga and LN purists!). Taking place some time in between seasons one and two of the anime, Date A Live: Rinne Utopia, the first of the three games, follows Shido in what appears to be his everyday life… only an additional piece seems to be added to the equation — Rinne, Shido’s supposed childhood best friend. Not surprisingly, Shido soon begins realizing that all is not as it should be, thus setting off a chain of events that will challenge Shido, the Spirits (and Origami, of course), and reality itself.

Date A Live: Arusu Install, the second game, takes place sometime after Date A Live II, and once again follows the daily life and adventures of Shido. …Sort of. Rather than following Shido’s life itself, Arusu Install takes place inside of a virtual reality game that ol’ Shido Itsuka so graciously agreed to play, fittingly titled “My Little Shido 2”. Unfortunately, all isn’t as it seems in this digital paradise. After a run-in with a mysterious AI named Aritsu, Shido, and shortly after his gaggle of gal pals, causes him to become stuck in the game itself. Their only way out? To show Aritsu what the true meaning of love actually is. And, yes; this story is just as meta as it sounds. 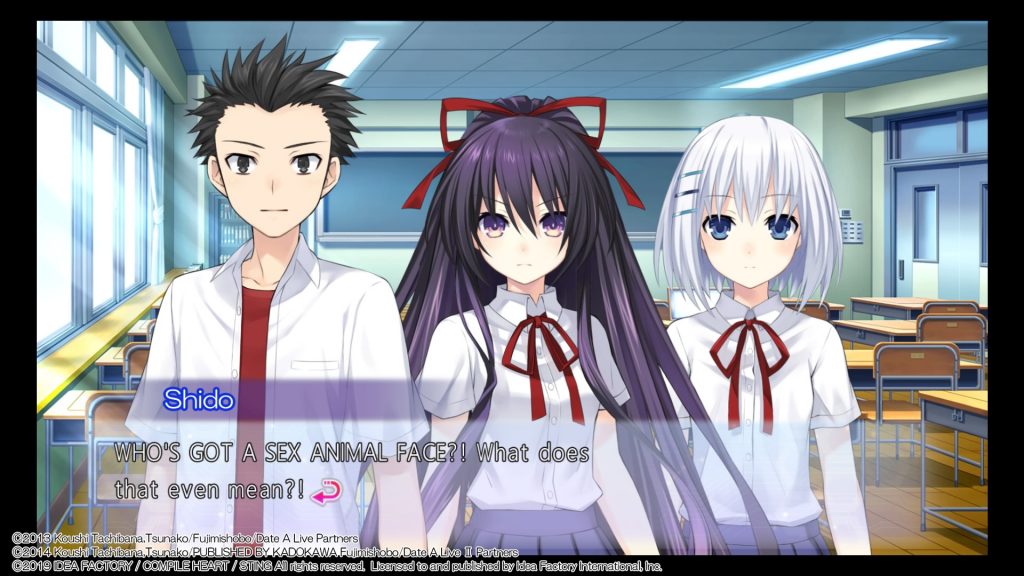 Despite being three different games, each of the Rio trio share plenty of narrative similarities with one another. Which is good, because it makes things way easier to talk about. The most obvious thing to note is just how well each of them fits into the Date A Live universe overall. Rather than creating an entirely unique “what-if” scenario that breaks the anime and video game universes in two, Rio Reincarnation is set up to perfectly complement its source material. Events take place during lulls within the main series, filling in the natural gaps that occur between seasons and easily bridging the gap between video game and anime. On top of this, the games are also incredibly faithful to the source material, making them feel as though they should be a part of the overall canon and enhancing the depth and quality of the Date A Live universe. It’s always nice to see video game spin-offs of anime work out, and Rio Reincarnation works out very well. 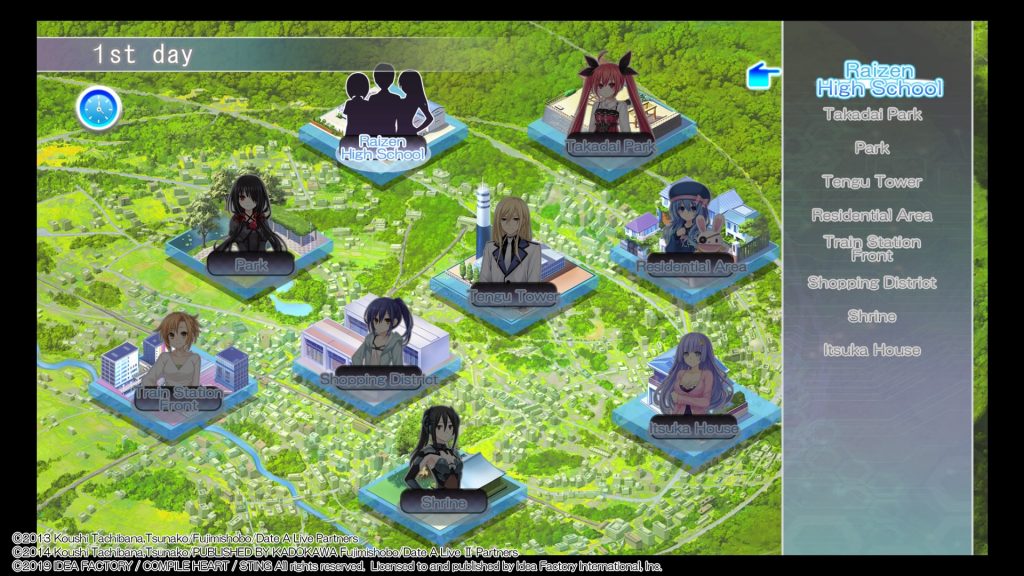 Despite literally including dating sim mechanics in the show, Rio Reincarnation is not a dating sim. But it is a visual novel with pseudo dating sim mechanics, which is pretty close! Regardless of which game you choose to play each of Rio Reincarnation‘s games pretty much play the same. And by “pretty much” I mean “exactly”. Each game follows a story that takes place over a set number of days, with each days containing different events occurring each day. Typically, overarching story events take place at the beginning and end of each day, with changes — both minor and major — taking place depending upon the choices that the player has made so far.

In between story events are free time segments — and it’s here that the player gains the most control. Each day, the player will have the chance to interact with a multitude of characters from the Date A Live series. Side characters, like Kannazuki And Mana, don’t hold much, if any, impact on the main story, with their primary role being to provide the player with flavor text and a greater sense of immersion. Free time’s real bread and butter lies within the Spirits (plus Origami) themselves. By choosing to spend time with their favorite otherworldly waifus, they can bond with them, thus molding the story to their desired character ending. 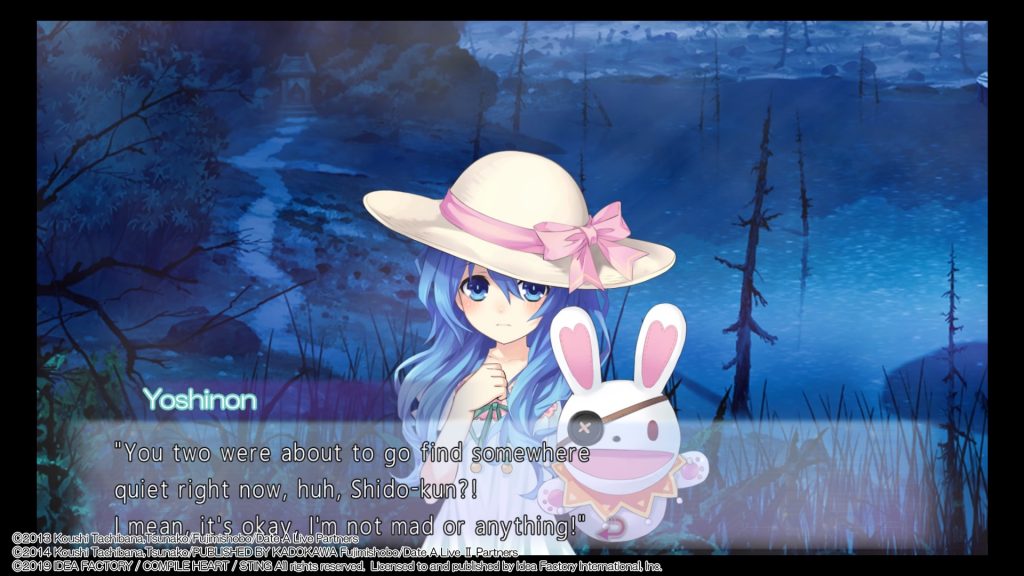 The way you play the game affects how certain events play out!

While this may be nothing short of gospel to those familiar with the ways of the visual novel, it’s still worth mentioning how much Rio Reincarnation emphasizes replayability. Not only do the player’s various choices play a sizable role within the overarching narrative, making it interesting to see how different choices play out long-term, but Rio Reincarnation also rewards the player for doing so. And, while I can’t say just how the game rewards you (that would be a spoiler, after all), I will say that it’s very worth doing so if you’re interested in truly understanding each game’s story. 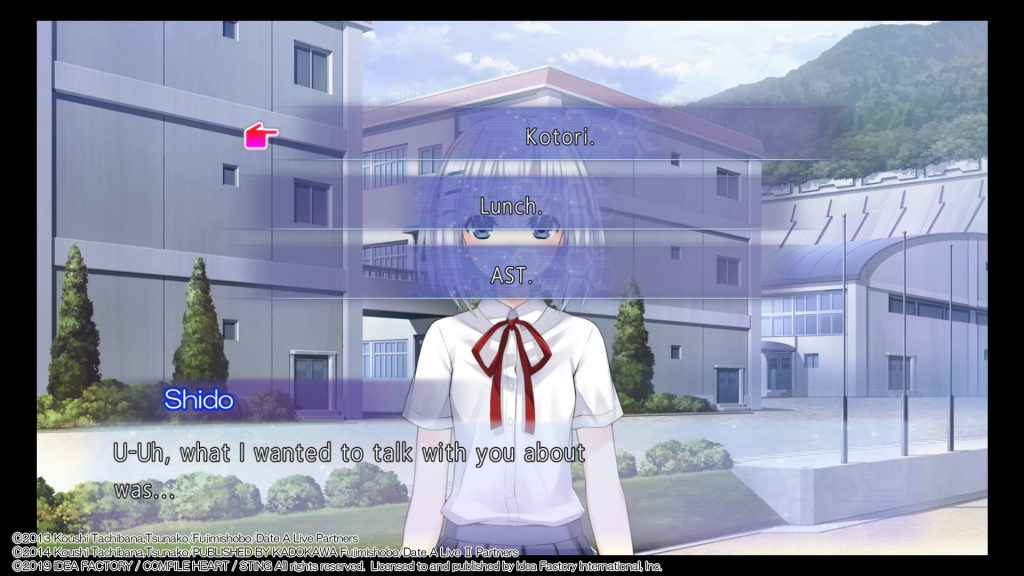 Bonding with a spirit (or, of course, Origami) isn’t as easy as selecting a destination, of course. To win them over anew, Shido must once again date them. And, since he doesn’t have his normal Ratatoskr safety net, it’s up to him (ie you) to steer his dates toward success as best he can. When it comes to successfully making your way through the game, things generally aren’t too difficult. Despite having a surprisingly high number of Game Overs (which you’ll actually need to hunt down if you’re hunting for trophies), Rio Reincarnation never springs them on you. In fact, it’s difficult to accidentally fail. As much as I appreciate things not being obtuse, I can’t say that I would have minded it if the game put a little more emphasis. But, if it was either one way or the other, then I suppose that Rio Reincarnation made the right call easing back on the difficulty.

If there’s anything that I wish that Rio Reincarnation would include, it would have to be Ratatoskr safety net. Objectively speaking, I understand why it is that Shido can’t get help in the way in which he normally does. It’s explained clearly in each game and done in a way that actually makes sense. However, given the fact that one of the series’ staple tropes is using a dating sim-like device to feed Shido information on his dates, I feel like not being able to do so is a missed opportunity.

All-in-all, I’m incredibly happy with Date A Live: Rio Reincarnation. Not only did Idea Factory (Or, rather, IFI) finally take it upon themselves to grace the West with the Date A Live content which we have been devoid of for oh-so-long, but their decision to bring over this game specifically ensures that we’re all but caught up with Japan. If you’re a fan of Date A Live, then this game is basically mandatory. And if you’re not, well, go watch the anime and then come back — you won’t regret it!

Full disclosure: This review is based on a copy of Date A Live: Rio Reincarnation given to Hey Poor Player by the publisher. 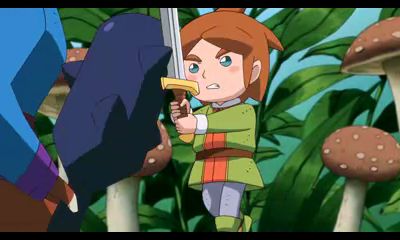