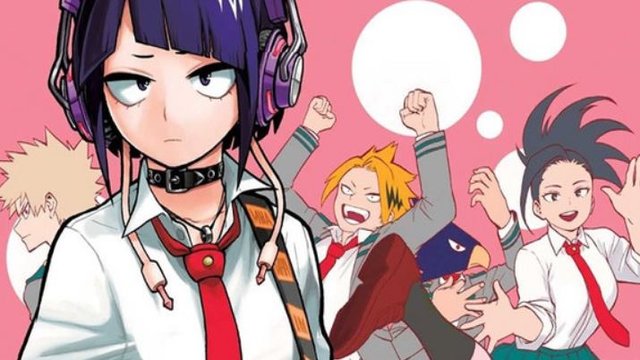 Ah, now that’s more like it — some much, much deserved down-time for our fledgling superheroes. After taking down a deadly crime syndicate, losing Nighteye, and rescuing a traumatized little girl, Izuku “Deku” Midoriya and the rest of the Class 1-A gang take on U.A.’s School Festival with the power of music! Not that their ambitious plans won’t involve some hard work and heavy brainstorming, but with music-loving Kyoko Jiro helming their upcoming performance, Quirks and dance come together to set aside their troubles and put on a show! But even this light-hearted affair isn’t free from potential disaster: should the self-proclaimed Gentleman Scoundrel have his way, the ensuing scandal would further degrade U.A. High School in the eyes of the public.

If the above summary and the cover’s softer colors hadn’t already clued you in, Volume 19 of Kohei Horikoshi’s My Hero Academia (mostly) sets aside shonen action in favor of high school hijinks. The Characters refresher cements the tone right away, what with the the personality-swapping villain Meddler testing readers’ attention to detail with some fun body swaps; I admit some stumped even me. This shift from the League of Villains into full-on school festival prep may leave us pondering how Horikoshi may’ve pursued an ordinary, slice-of-life series, but My Hero Academia‘s cascading creativity dismisses such inferior fantasies; indeed, it’s only natural the series’ exuberant cast ensures we’re treated to the funnest volume yet.

Right away, we’re sent into hysterics upon revisting Aoyama’s not-at-all-creepy attempts at kindling a friendship with Deku, which may or may not involve cheese. With previous volumes raising the possibility of a treasonous mole, what ensues is…not that, but instead a humbling spotlight on a relatively sidelined 1-A student. Having previously dismissed his navel laser as being among the more unwieldy 1-A Quirks, it’s it’s a compelling parallel to Midoriya when considering his classmates’ second-nature grasp of their powers: we’ve witnessed the fame and success surrounding hereditary Quirks before, but Aoyama’s struggles proves that doesn’t equal triumph across the board. Considering his efforts and newfound friendship (and comedic flair), I now fear any possibility of ulterior motives.

But I was getting to the festival! That we have whole chapters dedicated to dance choreography and band selections provides a sporting ground for My Hero Academia‘s wild personalities to bounce off each other. Mind you, this isn’t exclusively an in-road into comedy — that even Bakugo can find a common cause through his surprise drumming skills is a heartening sign of maturity, even if the reasons aren’t entirely wholesome — but the exaggerated antics of everything from Jiro’s singing literally blowing away potential candidates or Togata’s improvised surprise appearance induced incessant grins for much of the volume. (Right down to Mineta’s ambitions repeatedly being dashed to pieces, not the least in self-lamentations surrounding his character design — whether you hate the grabby imp or not, even his lady dissenters take pity.)

Are you ready to rock? 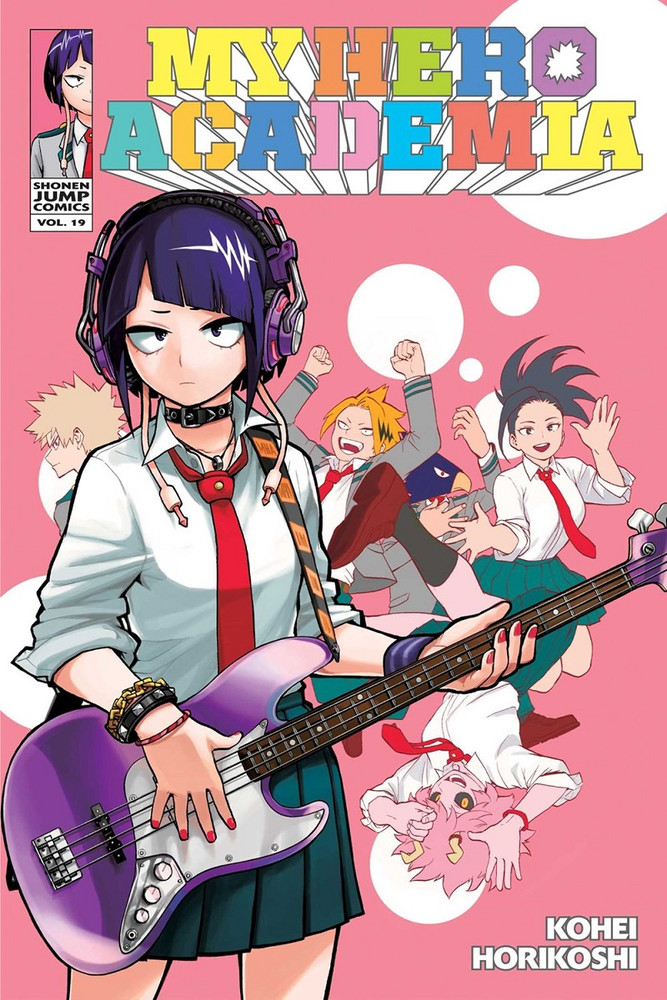 Still, it’s the sense of camaraderie that ultimately wins us over: Jiro, the music-loving hero of 1-A, almost shoots down the idea of a concert thanks to a perceived incongruity: other classmates tie their respective interests into her quirks (for instance, Sato’s sugar-rush must entail a love of sweets as fuel), but despite what her elongated ear jacks may imply, she can’t match the same ideal with her vibration powers. As the old saying goes, however, not all heroes come in capes, and with how this’ll segue into the rehabilitation of little Eri, who wants nothing more than candied apples and another chance to meet her savior, renders her efforts — and by extension, Class 1-A — a humbling goal to root for.

Regardless, even an event as benign as this requires some external conflict — the judgmental jeers of their fellow U.A. students can hardly ruin their plans, so there’s where the villainous duo of Gentle Criminal and La Brava step in. Horikoshi incorporates his love of YouTubers into My Hero Academia‘s most enigmatic villains yet, who operate upon petty crimes for the sake of judgment, glory-seeking, and yes, viewership. Their plan to trespass upon Japan’s most renowned hero school isn’t necessarily rooted in malice, but that of merely attention; after all, what’s some festival compared to a nation-grabbing spectacle that’ll further undermine an already battered U.A.?

Thusly, when Deku stumbles upon their nefarious plan, Horikoshi carefully frames their conflict with appropriate passion. What we have here is a battle unlike any other in My Hero Academia — not a career-progressing training exercise or life-or-death villain encounters, but a clash of ideals pressured under a race against the clock. Gentle seeks to redefine the age of heroes through simple infiltration, yet Deku aims to save the day merely to preserve the passion his friends put into the festival. That this battle expertly elevates its one source of comedy —  a suspicious elderly passerby observing the whole drama — into the actual fray speaks to Horikoshi’s growing expertise as a writer: Gentle and La Brava’s antics require a touch of farce, but that hardly means there’s nothing at stake.

I could go on, but alas, the resolution awaits in the next volume. Some fans may perceive this volume’s de-emphasis on gritty action as a downgrade, yet I’d like to think its refreshing change of pace perfectly illustrates My Hero Academia‘s main theme: heroes can come not just from anywhere, but in any form.