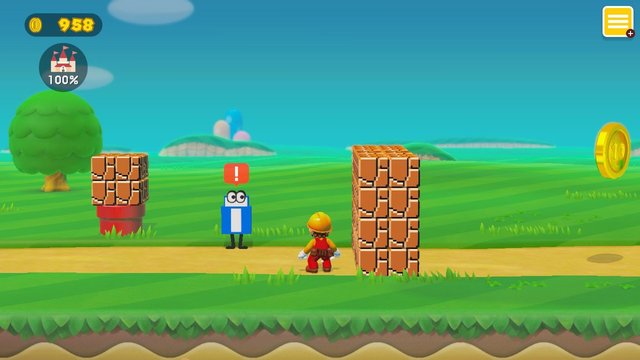 Of the various contractors lurking around Peach’s Castle, Mr. Eraser is the most clandestine — conspicuously hanging around impenetrable brick walls, the sentient piece of rubber offers his miraculous scrubbing prowess on a strict “don’t ask, don’t tell” basis. Why, exactly, these involve rubbing out Spinies, Lava Bubbles, and a Pom-Pom is known only to the Mushroom Kingdom underworld, but Mario’s willing to get down and dirty for the sake of new duds and potential avenues for further job requests. The tissues for your ruined childhood are over there, but our guide’s just down below.

So, uh, when does Mr. Eraser appear?

After you’ve completed building the first floor of Peach’s Castle, you’ll find Mr. Eraser down the rightwards path. He’ll offer three separate jobs for you, but while all center around offing enemies, they’ll each grant a different reward. Neat! 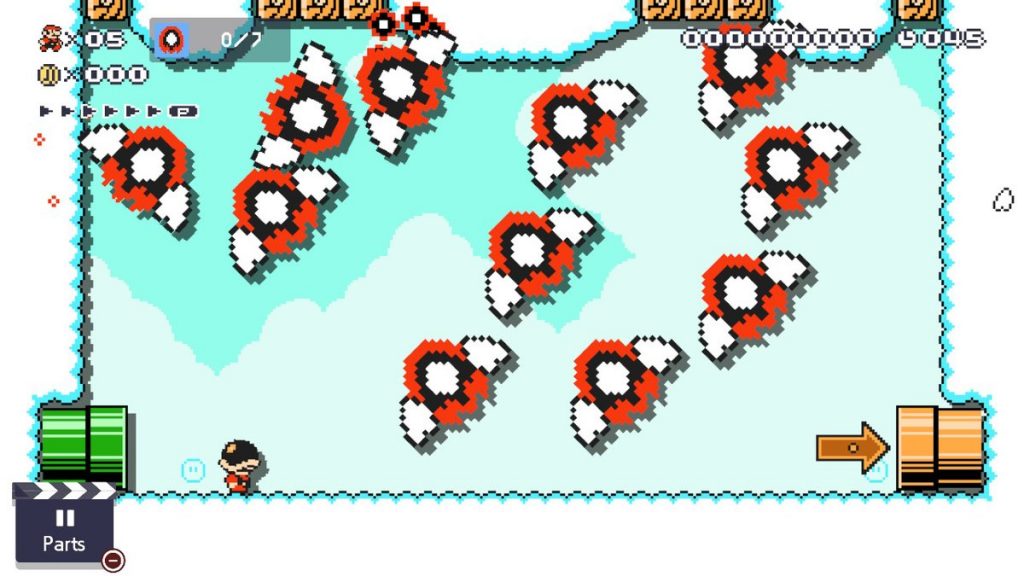 This Super Mario Bros. 3 mission’s straight and to the point: don the Buzzy Beetle helmet in the first room, then travel down the pipe to find yourself in the above Lava Bubble-infested arena! Of the eleven Lava Bubble, you only need to bop seven, but remember: while your new headgear renders aerial attacks null, it’ll plop off the moment you’re torched down under. Rather than panicking from the limited time limit, simply stay grounded and hop whenever a fireball comes your way.

Your reward for clearing this mission? Mr. Eraser erasing the bricks from the red pipe, which leads to Partrick the sentient brick block. 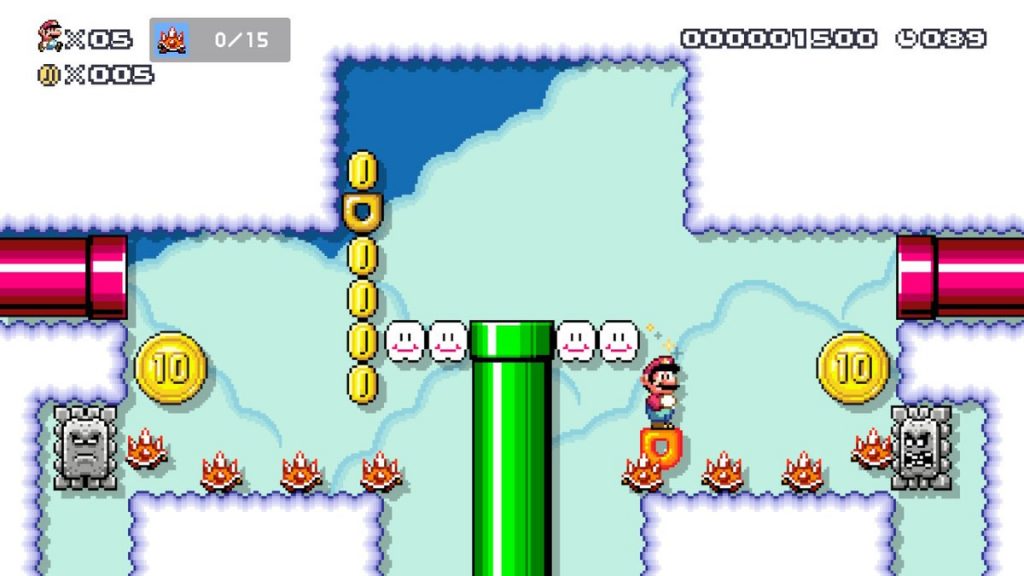 While also on a short timer, this Super Mario World-themed hit job employs a clever method of eliminating Spinies. Grab the Mushroom from the ? Block before heading up the pipe, and observe the layout as seen above. Believe it or not, no interaction with the Spinies themselves is necessary; nay, simply board the Donut Block when the spiked turtles begin poring out, then escape the moment the Thwomp charges your way and crushes the Spinies for you. Cool!

You’ll need to eliminate 15 Spinies, but remember the score only accumulates when they’re crushed by the Thwomps, not by being pushed off. Regardless, your reward is Mr. Eraser removing the brick blockade, leading to…a red flower? Rumor has it you’ll discover its purpose upon clearing Patrick’s jobs. 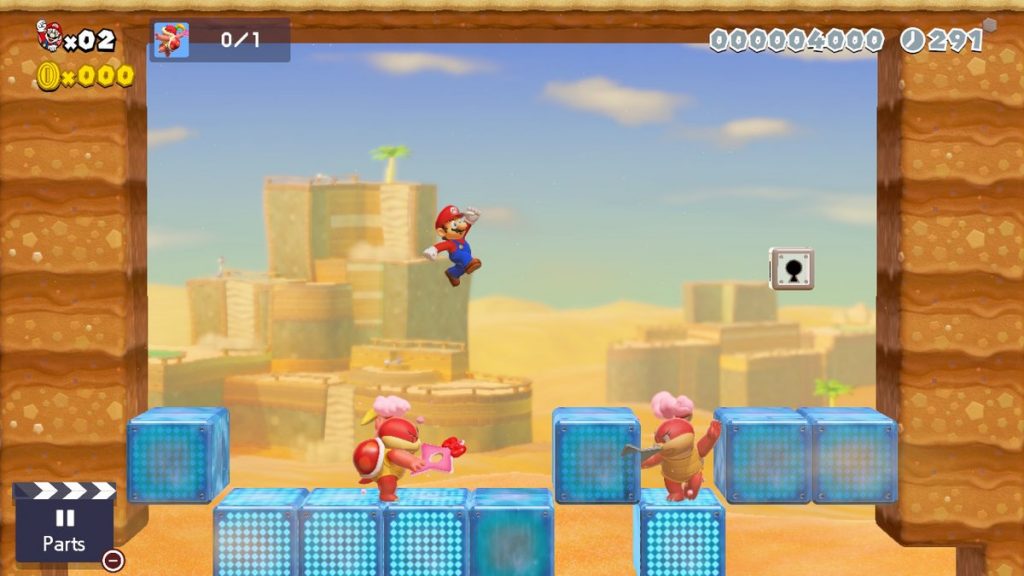 Who’s up for a Super Mario 3D World mini-boss fight? Apparently, this desert-dwelling Pom Pom knows there’s a price on her head, but her Trap Blocks will prove a more annoying adversary — they’ll sink the moment you make contact, so between discerning Pom Pom’s shadow clones and the dissipating blocks, you have a tough challenge on your hands. Here’s a handy tactic that’ll help you win the day: did ya notice how one of the Pom Poms above has faded colors? That’s the fake, but you’ll only spot this discoloration upon its split-second inception, so pay close attention!

Your reward for the hard-won battle? A Refreshing Shirt for your Mii avatar! Ain’t Mr. Eraser’s visage a dazzling fashion choice? 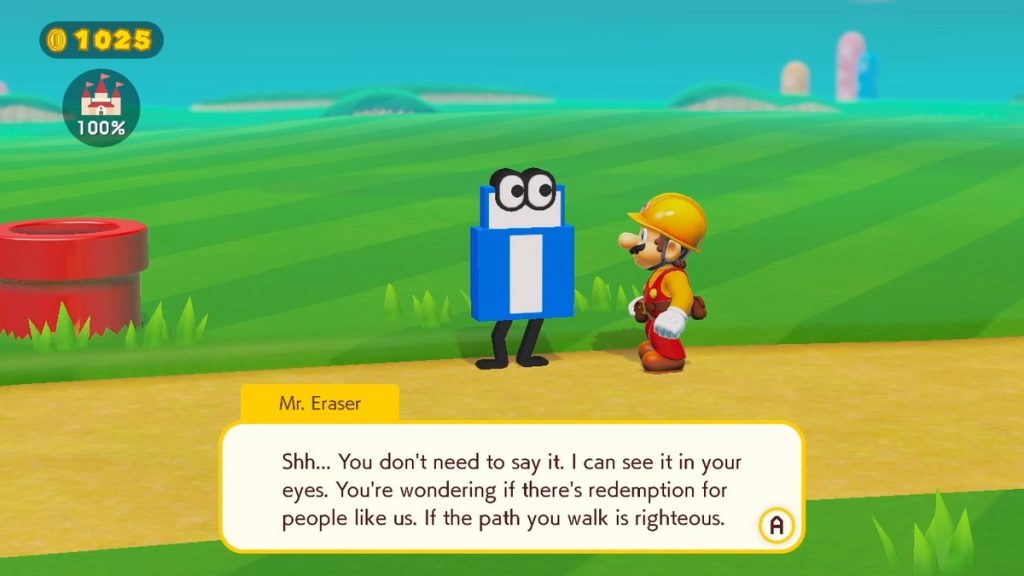 His work done, Mr. Eraser departs the mushroom mortal coil by leaving no trail behind; in other words, erasing himself. Or does he? While you’re busy pondering over what’s undoubtedly Mario‘s deepest evaluation of philosophical ethics, check out our Super Mario Maker 2 Story Mode guide for further job walkthroughs.