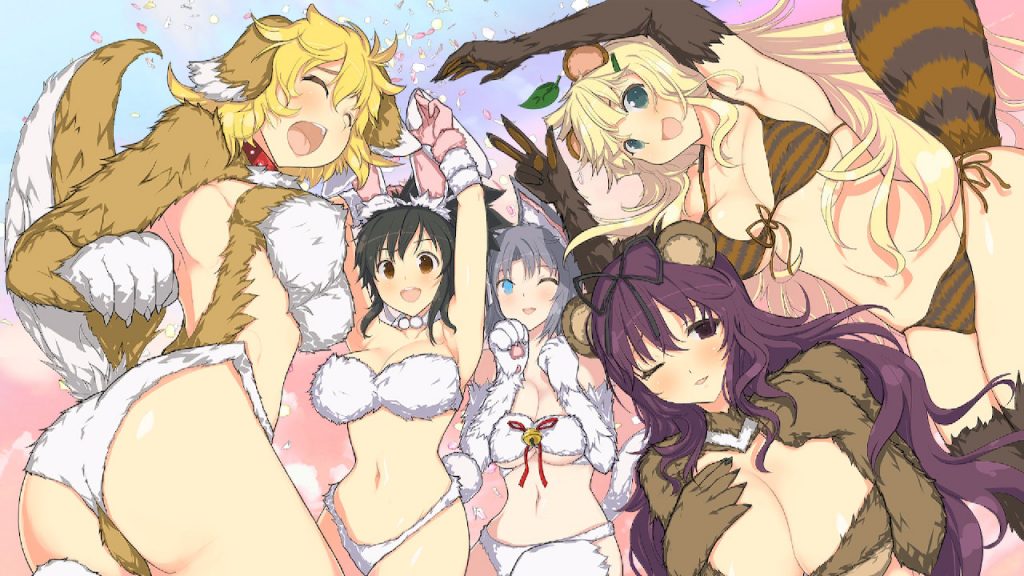 The Senran Kagura series never seems to run out of surprises when it comes to side-games, does it? From cooking-based rhythm games to water gun tournaments, and, more recently, even massage simulators, Kenichiro Takaki’s ever-growing group of giggling, jiggling Shinobi-in-training have far outgrown being solely confined to their core hack-and-slash titles. That brings us to the newest title to join the Senran Kagura side-game bunch, and firs-ever SK pinball game, Senran Kagura: Peach Ball. And boy, if you ever thought that pinball wasn’t an acceptable medium through which to distribute oodles of fan service, you’ve got another thing coming.

Having been on Senran Kagura review duty for some time now, I’m privy to how the series works (although it’s not something terrible hard to work out for yourself). Because of that, I’ve come to find the most outrageous thing about the franchise in its entirety to not be the characters and situations (you kind of get used to that after a while), but how Marvelous is committed to making Senran Kagura games that are of actual quality — as opposed to focusing on nothing outside of eye candy. Not surprisingly, the same can also be said of Peach Ball. Sure, it’s a little smaller than I’d like it to be, but what is there is a lot of fun, and it, like the rest of its ilk, bears the same seal of (wonderfully shameless) quality that we’ve come to expect. 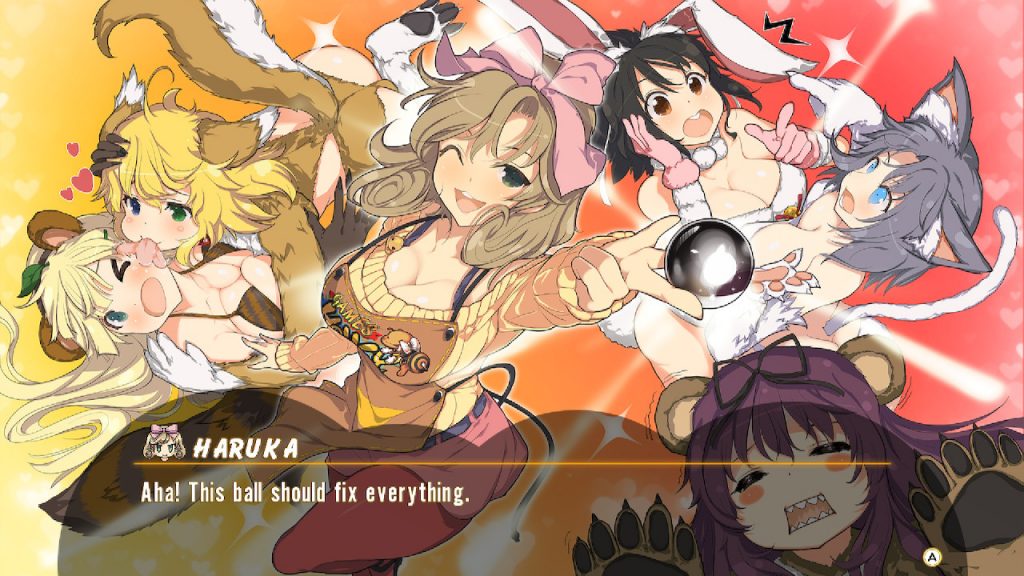 You know what? Sure. Let’s just go with that.

Now that the intro’s out of the way, let’s get on to the story. And, yes, it’s just as weird as every other spin-off. Probably even more so. Senran Kagura: Peach Ball‘s narrative begins with a tournament at a local arcade, one in which Homura Crimson Squad’s diabolical genius Haruka works at. All goes well at first, and the tournament even reaches its climax… erm… the final round, when, all of a sudden, a mysterious (and definitely not organic) substance called “Beastall” begins to fill the area, driving all but five customers away to safety. And five that didn’t get away? They just so happen to all be Shinobi-in-training who, because of the Beastall, have turned into human-animal hybrids. Realizing that the fault lies entirely with her, Haruka quickly snatches yet another invention, the Peach Ball, whose properties can cure the girls’ condition. The catch? It works best when used like a pinball. Good thing she’s got a pinball pro (that would be you) there to help her!

Despite not having the same amount of story-related content simply due to its smaller size, Peach Ball‘s narrative is definitely impressive. Rather than featuring one story in which the player simply rescues each girl. Peach Ball instead divides the story into five separate pieces, each featuring a scenario in which the player and their Shinobi of choice (all of whom except for Yomi are cured from the start) team up to save the other remaining girls. The end result is something that not only greatly extend’s the game overall playtime, but also allows players to spend more time with each Shinobi. Of course, the stories, being as short as they are, don’t have the same emotional appeal that the core titles do, but the humor and fan service are most certainly there in full force. Personally, I do see a single downside to this approach, that being the fact that there doesn’t seem to be a “canonical” route, but I’m honestly doubtful that many people will have an issue with this. 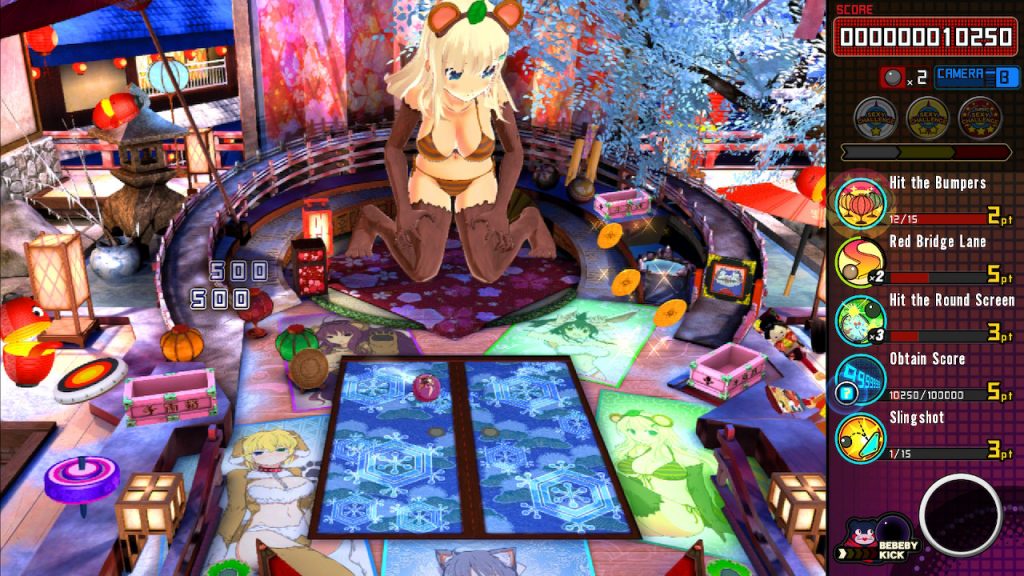 Despite its characteristically zany premise, Peach Ball is a surprisingly normal pinball game. Just, you know, lewder. Rather than letting play until a Game Over, story mode tasks players with completing levels by completing missions. Cheekily titled “Peach Missions”, these tasks require players to fulfill specific requirements as they play, such as hitting the bumpers a specific amount of time or reaching a certain score, and award players special Peach Mission points when completed. Once the player has enough points, they will then be able to activate a “Sexy Challenge” by bopping their current target (which would be the mostly-naked girl sitting in the middle of the board). Acting as a “boss” of sorts, Sexy Challenges take place on special, smaller boards and challenge players to complete the presented mini-game as quickly as possible. Not surprisingly, all of the Sexy Challenges revolve around hitting targets, but credit goes to Marvelous for making them as diverse as possible. Once the player has completed three Sexy Challenges (the last of which is the “Super Sexy Challenge”), the board is cleared and the player is whisked away to the next chapter.

I’m not going to lie; Peach Ball‘s boards are pretty great. Even looking past the fan service, they’re both incredibly unique from one another ⁠— with the first being more traditional in nature and the second revolving around collecting coins ⁠— and the constant rotation of Peach Missions not only works well with Story Mode but with the game’s Free Mode as well. Of course, with that being said, there’s also the fan service. While Peach Ball‘s pinball antics may be great on their own, this is, above all else, a Senran Kagura game, and you can (and should) expect this game to push the limits of the ESRB (or your area’s equivalent) to its fullest extent. Between the mostly naked Shinobi sitting atop your board, the many risque dialogues that take place, especially when Ryōna is involved, and the collection of Sexy Challenges which literally has players smacking boobs and butts with pinball flippers, those looking for some classic Senran Kagura-brand raunchiness won’t be disappointed. 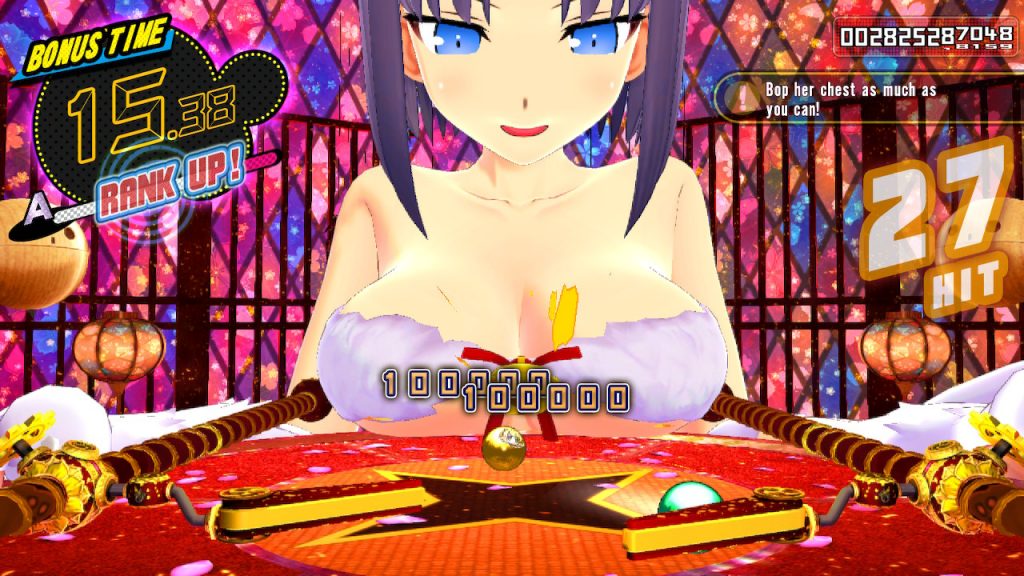 This looks more painful than sexy to me, but Yumi sure seems into it.

About the only thing that left me disappointed with Peach Ball was its amount of content. While the two boards that it offers are both great and make for excellent long-term rounds of pinball, I would have liked to have seen more from this game. $40 may be cheap compared to most other Switch games (in terms of being full price), but I’m not sure that I could justify dropping that much on a game that features the same number of courses as Pokémon Pinball — and that game even had a collection mechanic going for it. On the other hand, this could just be me being out of touch with the hardcore fanbase. Sure, it’s a pinball game, but it’s also a Senran Kagura game. I’m sure that a decent number of people will be fine with the smaller selection of courses given the sheer number of ways in which you can, *ahem*, interact with the 5 available Shinobi. And if that’s the case, $40 is probably nothing. 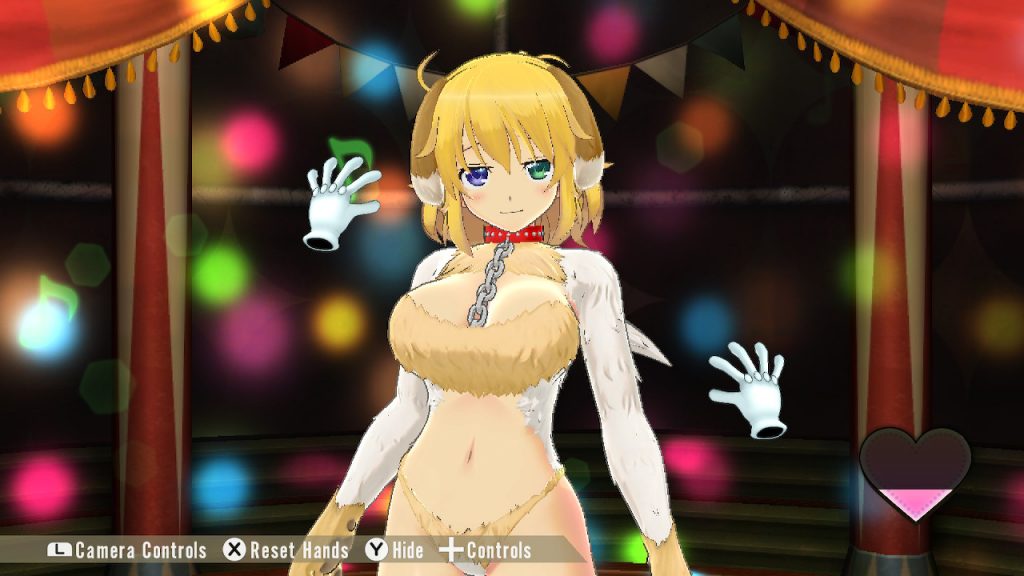 Pinball’s all well and good, but sometimes you need to take a break from the action. And, as per the norm, Peach Ball has you covered with a handful of extras. Players are able to spend money that they accrue through gameplay in order to purchase a plethora of goodies, including clothing, CGs, and pinballs to use on the game’s boards. Naturally, purchased clothing can be used to dress up each of the girls as players see fit. And, should you want to appreciate your stylin’ outfits (or just the girls themselves, I guess), even more, both the Diorama and Intimacy modes are available as well.

Senran Kagura: Peach Ball may be lacking in the quantity department, but there’s no denying its quality. By creating a fun and frantic pinball game and putting an extra-special spin on things like only the Senran Kagura franchise can, Peach Ball should be more than enough to please existing fans, and maybe even draw in a few curious bystanders while it’s at it. At this point, I’m convinced that Marvelous can make anything crazy and exciting via the Senran Kagura franchise. With that being said, I’ll be eagerly awaiting the release of Senran Kagura: It’s Time to File Your Taxes.

Full disclosure: This review is based on a copy of Senran Kagura: Peach Ball given to Hey Poor Player by the publisher.