How to Solve Stone of Destiny (Super Mario Maker 2 Guide)

Four more stone puzzles? We got the goods. 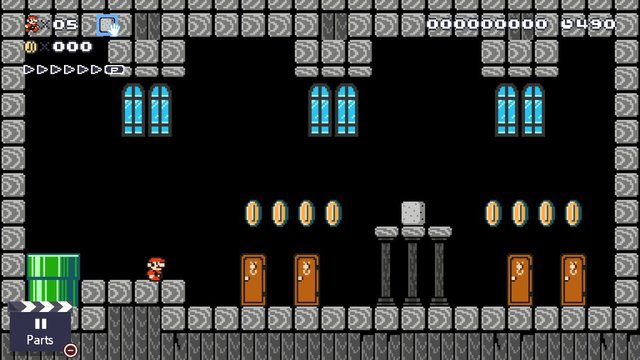 Hoo, boy: here comes another Stone puzzle! Unlike Yellow Toad’s levels, however, Stone of Destiny is but one of the many standard jobs offered by the Taskmaster Toad. (Number 77, in case you’re keeping count.) On top of this level requiring Mario to carry the stone to the goal, the four puzzles within can be major headaches, so we’ve written up this guide for anyone struggling with the Super Mario Maker 2 level.

So, what’s the objective?

If you did the Yellow Toad jobs, you undoubtedly remember how all his Stone Puzzles required careful handling of a single stone block, which was necessary to complete the level. Stone of Destiny works much the same, although it combines several puzzles into one Super Mario Bros. 3-themed level; four, in fact. For those who didn’t wake Yellow Toad, however, you should know carrying the heavy stone severely hampers Mario’s jumping, so you’ll have to get clever when hauling it around!

However, we should note that while the stone’s required to finish Stone of Destiny, recovering it from the individual puzzle rooms is unnecessary, as it’ll always respawn in the hub pictured in the heading.

A Grinder, a Stone, and Some Bullet Bills Walk Into a Bar… (Left Door #1)

Better steel your nerves, ’cause here comes some daredevil acrobatics against a volley of Bullet Bills! Our goal here is have the Stone cruise by the grinder-guarded conveyor belt and activate the Note Block to impede the cannon fire, but unfortunately for us, the belt’s programmed backwards. Our only option is to hop into niche above and quickly bop the On Switch; yes, this means you’ll be directly in the line of fire. On top of that, that belt’s in reverse, too, and there’s no way to adjust it, you’ll only get one shot before either retreating or death. What’s a plumber to do?

Don’t panic, that’s what: simply observe the flight patterns from the Bullet Bill firings, then jump in whenever one of the sentient missiles zooms past the opening and make a run for it! Ensure you’re directly underneath the block before bopping it; jump too early, and you’ll crash into the ceiling. No matter how you slice it, you’ll always make a split-second escape, so get outta there quick! Once you succeed, toss the stone into the lower conveyer belt so it blocks the Bullet Bill Cannon, then hop back into the upperniche and grab that key! Abandon the stone and head back into the hub. 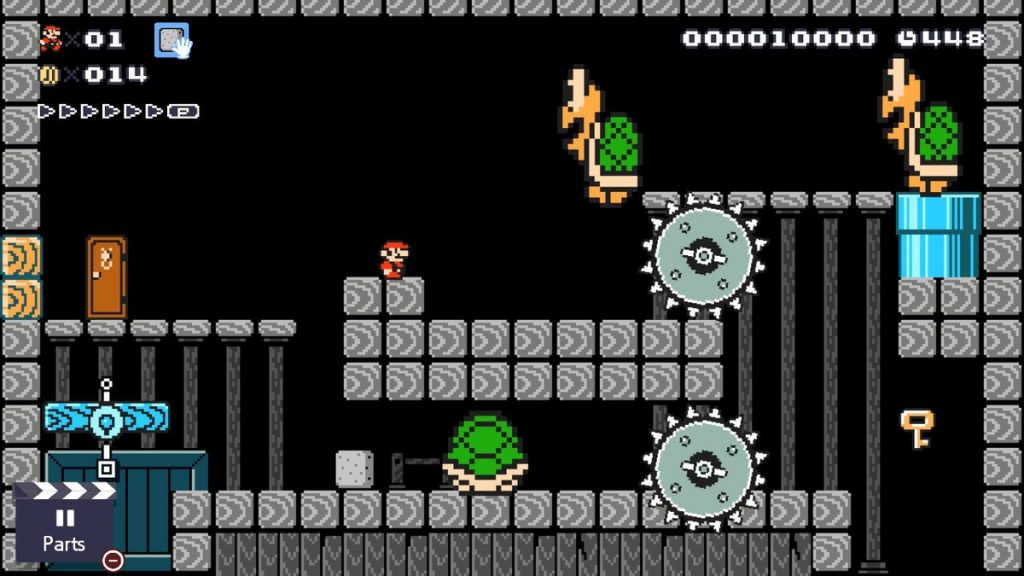 This puzzle’s pretty simple: simply drop the Stone underneath the starting platform, then hop onto the Giant Koopa aimlessly wandering before the upper Grinder and kick it down. Wonder of wonders — your stone bounces it back towards the key! That’s two you’ve got, now. 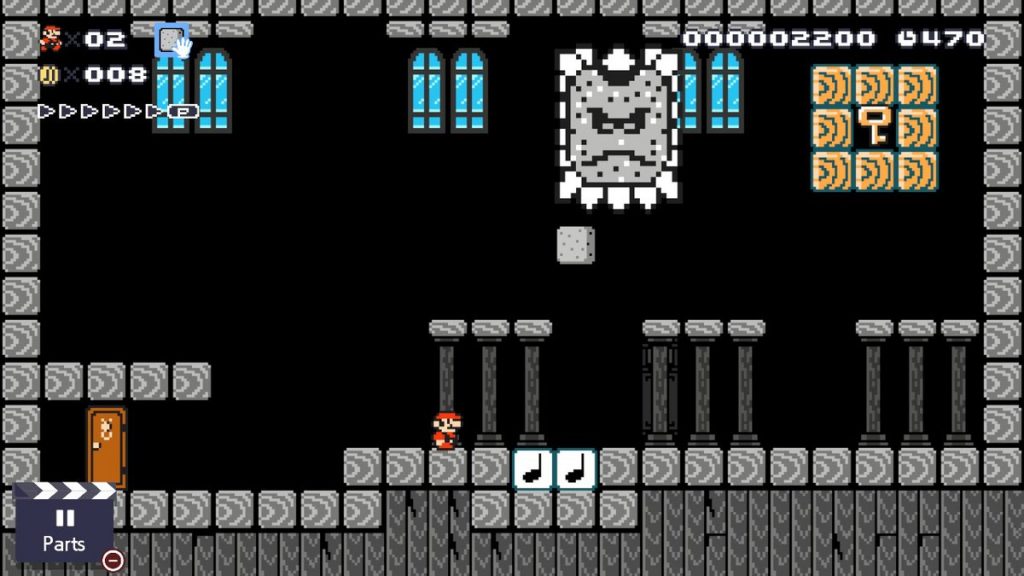 While this Thwomp puzzle recalls some similar tactics in other Story Mode levels, it’ll still require precise engineering on your end. As you’ve likely already deduced, you’ll have to maneuver the Thwomp towards to the wooden formation to smash open the hidden key within, which requires careful use of your Stone. As you make your way over to the Note Blocks, the Thwomp will pick up your presence and smash into the other wall — use this opportunity to kick the Stone into the Note Blocks, thereby blocking its passage back. The Stone will always rest on the upper platform, so grab it and, aiming from this position, kick the stone into the rightmost Note Block to prop the Thwomp upwards. Lure the Thwomp into destroying the formation, then jump up and snag the key as it heads back. 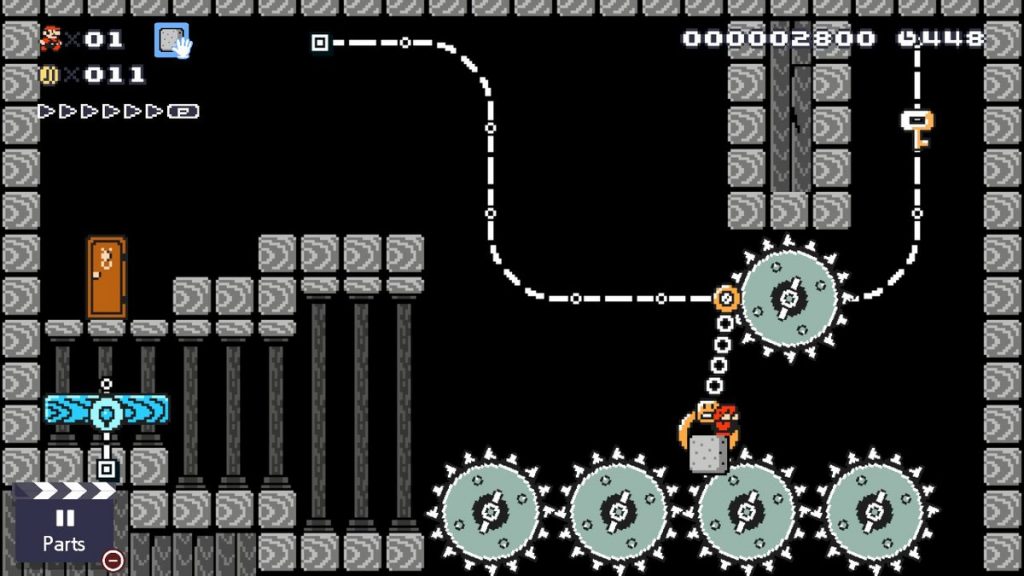 You ready to ride the Crane? Of course, a fleshy plumber is ill-suited for the incoming blades of a Grinder, but an impervious Stone might do the trick. Kick the Stone into the Crane’s path just before it reaches the platform, but don’t just watch when the Crane scoops it up; hop on! Believe it or not, you don’t have to move a muscle from here on — just stay still as the Crane strolls by the deadly Grinders, and the key’s all yours.

Take it to the End Zone! 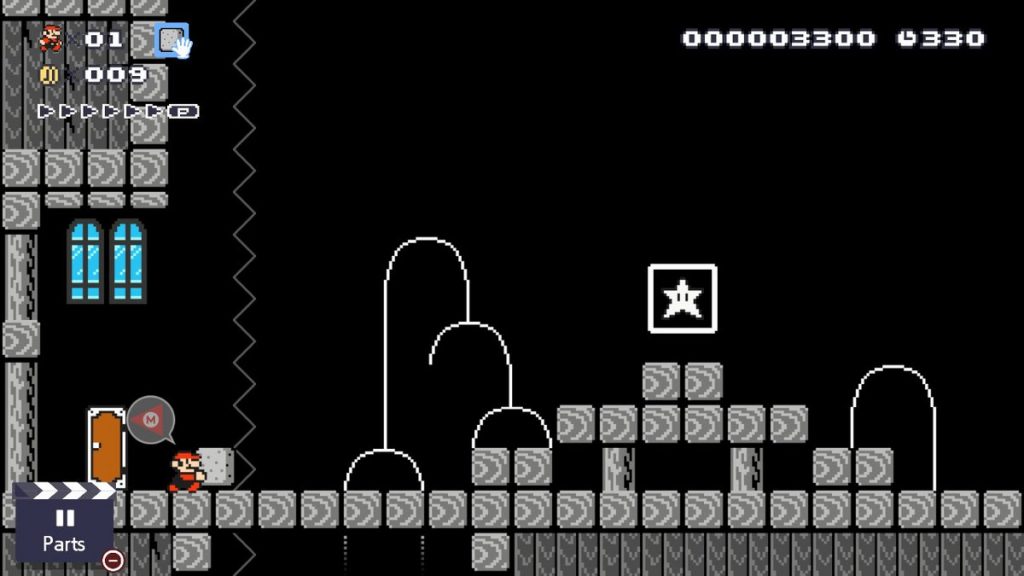 You’re almost done! All that’s left is to open the four doors and clear the level, right? Not so fast — aren’t you forgetting your Stone? Remember: the goal requires Mario to hold the Stone, so grab it from the hub and dash through the doors — the goalbox will be awaiting you at the end.

And that’s it for Stone of Destiny! Your reward is a meaty 300 coins — use it well! Let us know in the comments below if you have any further questions, but in the meantime, check out our Super Mario Maker 2 Story Mode Guide!