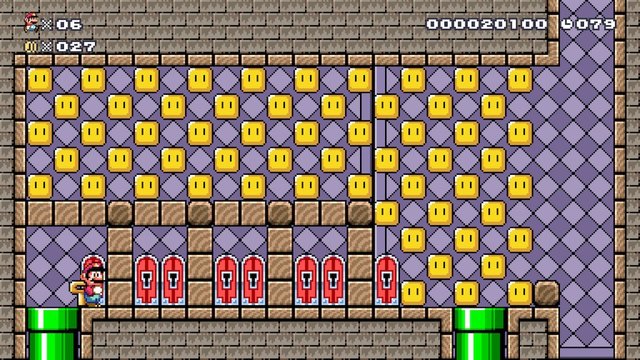 Oh no: a Super Mario World Ghost House! Those are never without their tricky puzzles, and Super Mario Maker 2’s Keymaster level is no different. Constructed by the mysterious “Agent 2”, this spectral stage requires four keys to complete, but a certain tease at the end of Agent 2’s letter unveils the truth: not only are there eight keys in all, but earning every last one unlocks the level’s “True Ending.” Naturally, we at Hey Poor Player scavenged every nook and cranny of this spook-house to divulge their locations. 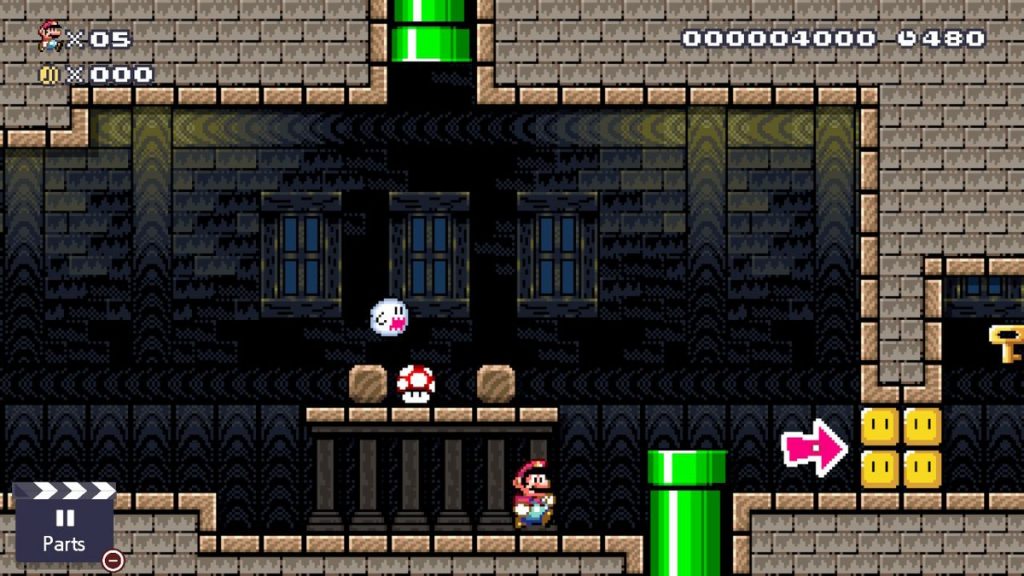 After obtaining a Super Mushroom in the first room, head down the pipe to reach the mansion’s basement; there, you’ll find three familiar tools that’ll help you solve the Ghost House’s puzzles: a POW Block, a P-Switch, and a Spring. As this basement provides pipe entrances to six separate puzzles, you’ll need to carry one of them around (remember: hold Y, and then crouch before dropping whatever you’re carrying; otherwise, Mario’ll just kick it away), but don’t worry: with our guide, you won’t resort to guessing-games. 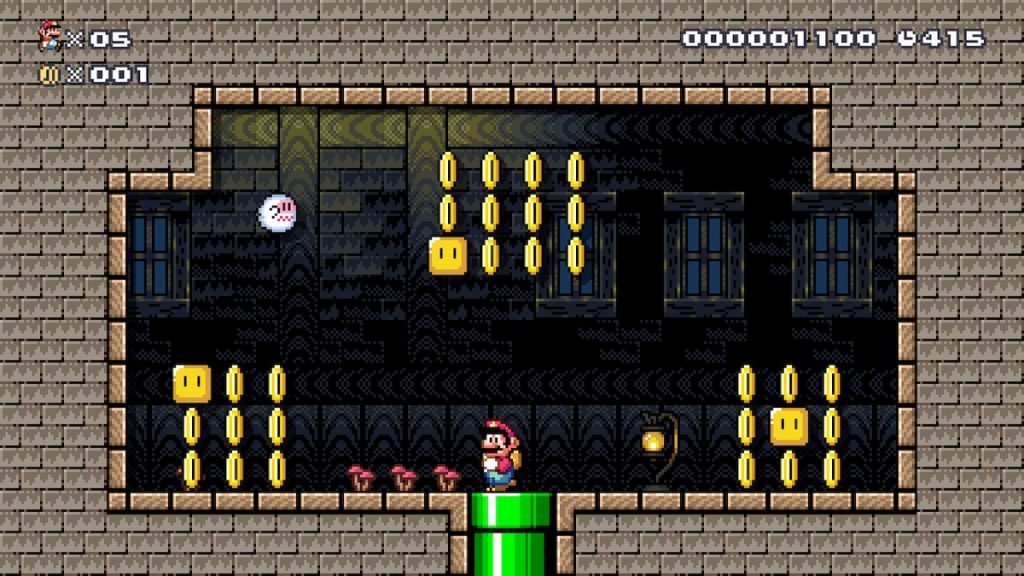 Grab the P-Switch, then hop into the pipe on the far left with the block symbol to find yourself in the above room. Any Mario fan should know what to do: hit the Switch, then observe with wonder as all the blocks magically transform into coins. But this specific room has a twist: three remaining blocks remain un-transformed! Which one has the key? The right one, but if you’re not Small Mario, you’ll need to duck under to bop it. Snag the key, collect the coins if you want, then get outta there. (In case you’re curious, the upper block has a nasty Boo surprise, while the left one possesses multiple coins. 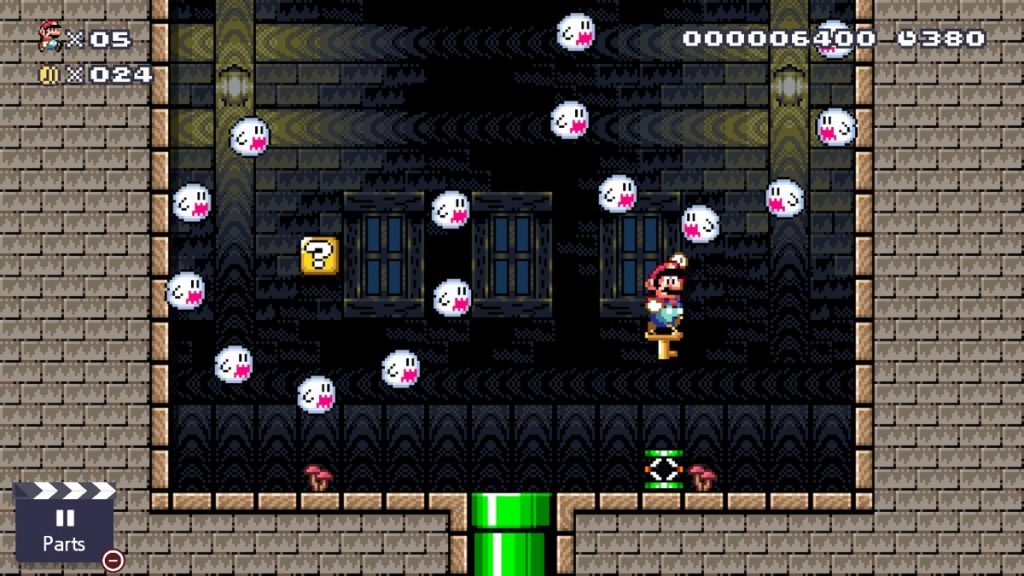 Bring the Spring with you into the middle left pipe, and observe the two Boo rings above — one’s guarding a ? Block, and the other’s encircling…nothing? A little too suspicious! Place the spring under, time your jump when a gap presents itself, and voila: a hidden block hosting your key! 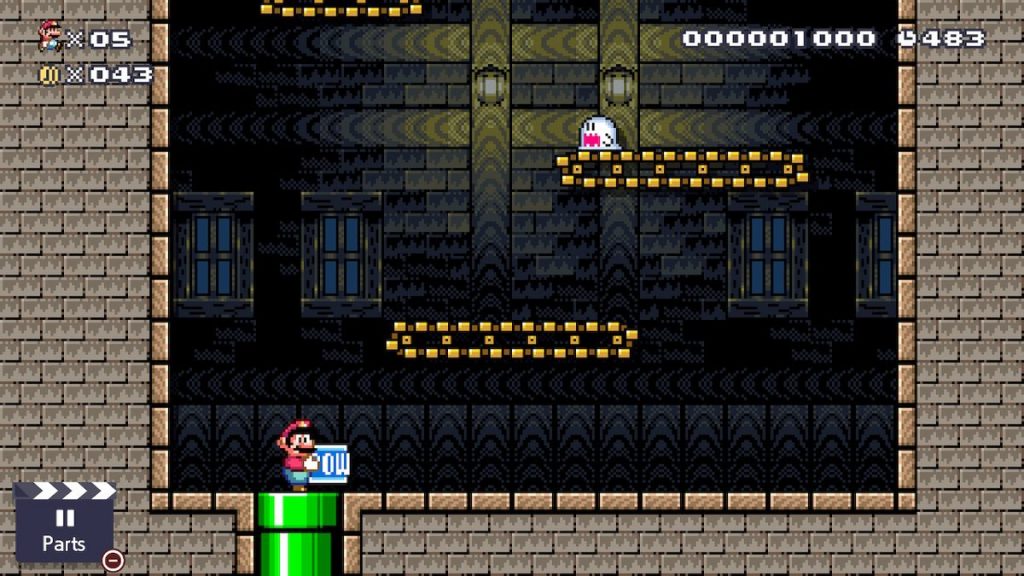 While this room’s interesting in that you don’t need the accompanying item to earn the key, it’ll certainly make your life a lot easier. Carry the POW Block into the leftwards pipe, then toss it when the Stretch Boo emerges from the second conveyor belt. But while that ghastly ghoul’s out of the way, you’re not out of the woods just yet: you’ve got some belt-running to do! Ensure you never let go of that Y Button as you time your jumps to reach the key at the very top. 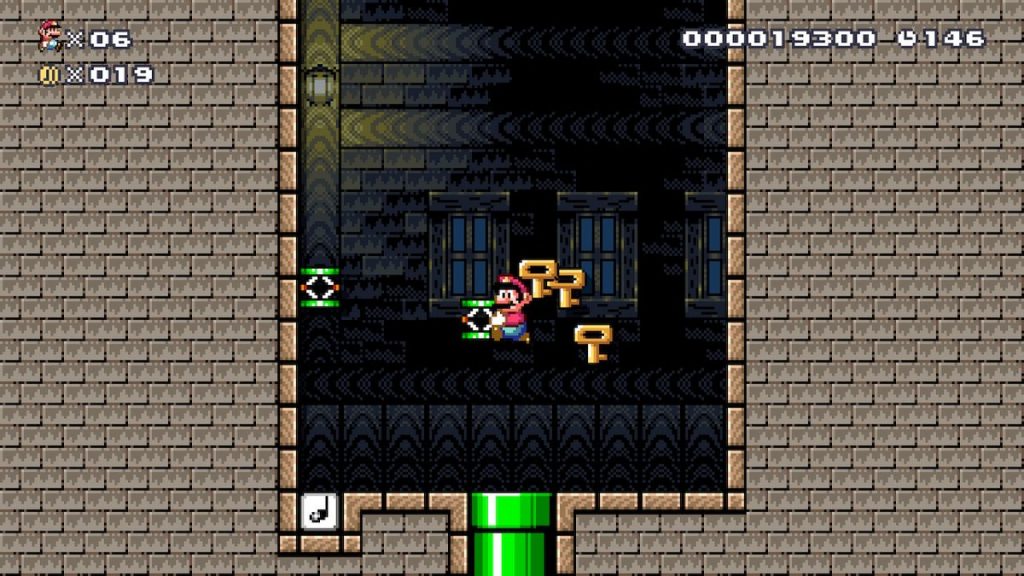 Take the Spring and enter the right pipe to find..another Spring and a Note Block? Kick your Spring onto the bouncy block, do the same for the other one, and then join in. As the two springs bounce together, they’ll gain further traction into the air, so ensure you’re on the upper spring before you spring your way up to the key. 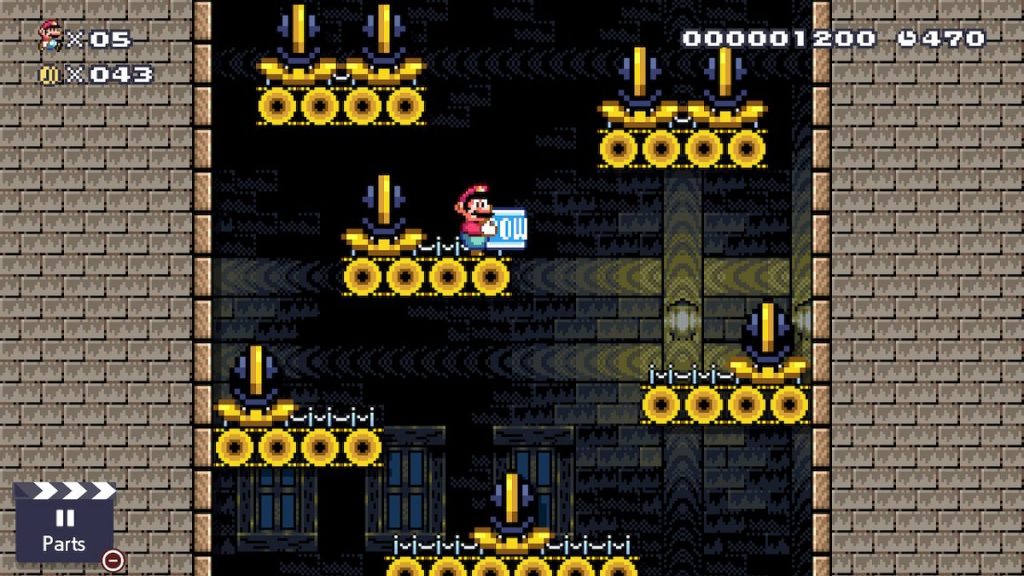 For all those times those nasty Munchers snacked on Mario, they had that pesky perk known as “invincibility” to avoid any repercussions. Time for some evenge: grab the POW Block and enter the middle right pipe, but don’t toss it just yet — wait until you’ve climbed up enough platforms and can witness every last Muncher before sealing their fate. Once they’re obliterated, hop up to snag the key. 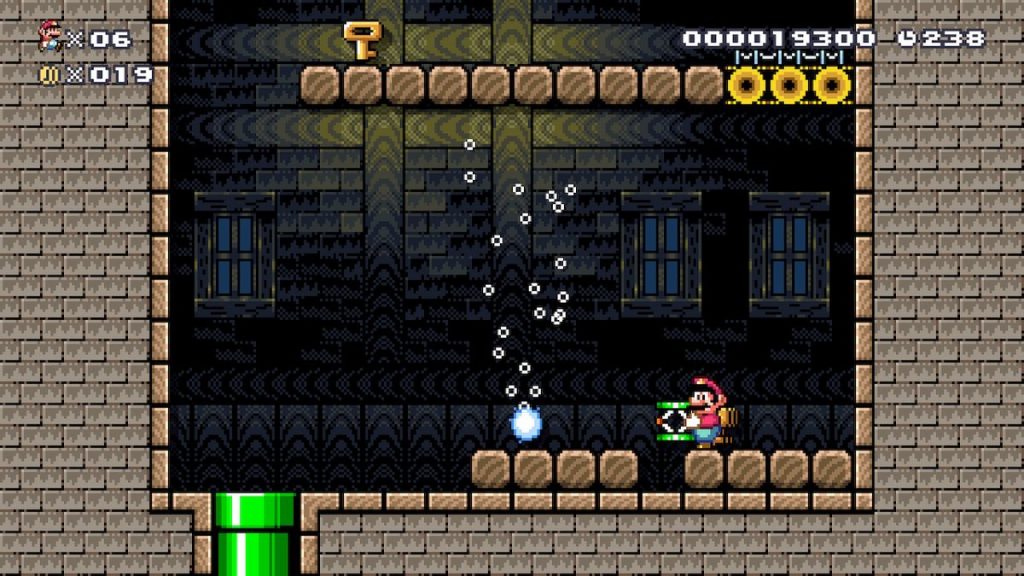 Grab the Spring and hop into the far right pipe to enter this Twister-occupied room; sadly, the Twister can’t reach the pass-through platform, but we’ll give him some help. As shown above, place the Spring gently into the gap so it can cross up, then hop into the whirlwind to soar up and earn your key.

Wait, It Was Hiding Up THERE? (Spring) 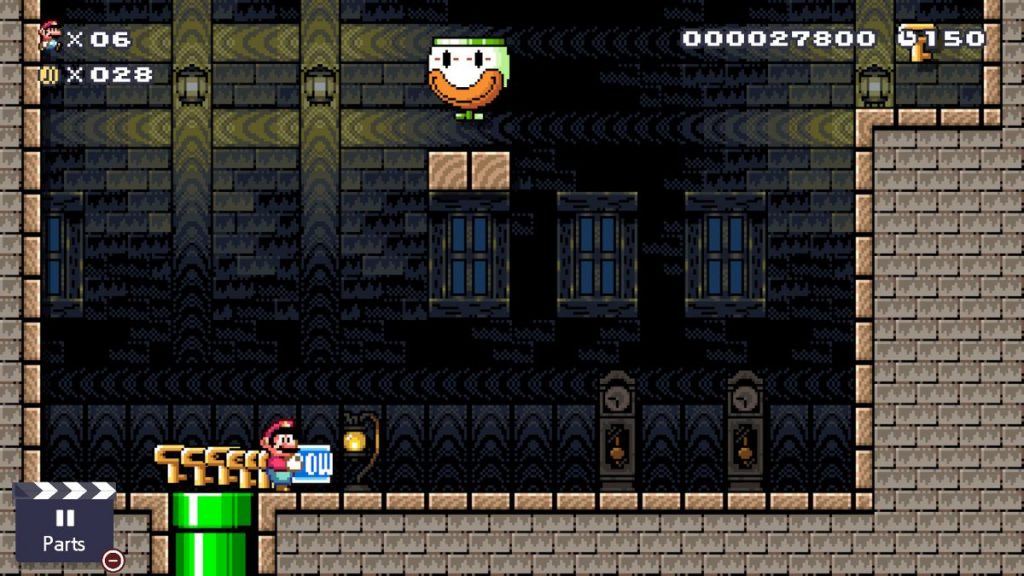 You probably remember at least one key’s hiding back in the entrance room, but believe it or not, the toughest key of all is hiding there too! Where, you ask? In the pipe spitting out the Super Mushrooms. What, you thought you couldn’t enter it? You thought wrong; regardless, grab a Spring and bounce into it to find a most peculiar set-up: an empty Clown Car waiting for a pilot. From the pipe you just emerged from, said pilot arrives in the form of a POW Block! How do you get in? In a process that’ll likely take a couple tries, grab it, then toss it upwards so it’ll land into the Clown Car. Once it comes to life, dash around to lure it down, then dash and jump while holding Y to snag it out of the aircraft; finally, hop in and zoom up to grab the key.

The Final Key, and… (P-Switch) 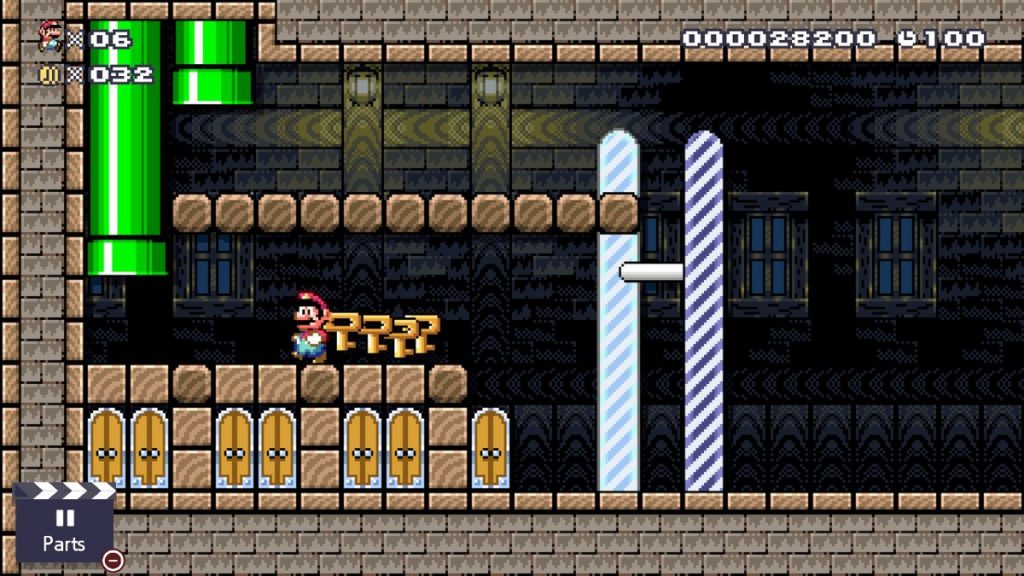 All that’s left is the final key — simply grab the P-Switch from the basement and use it in the entrance room; there, the final key rests just before the door. Grab it, then pass through to find yourself in a maze of locked doors. Unlock and enter through all four, but don’t pass through the goal just yet! As depicted above, jump up the platform and enter the pipe to unlock four more doors. Finally, the True Ending awaits! 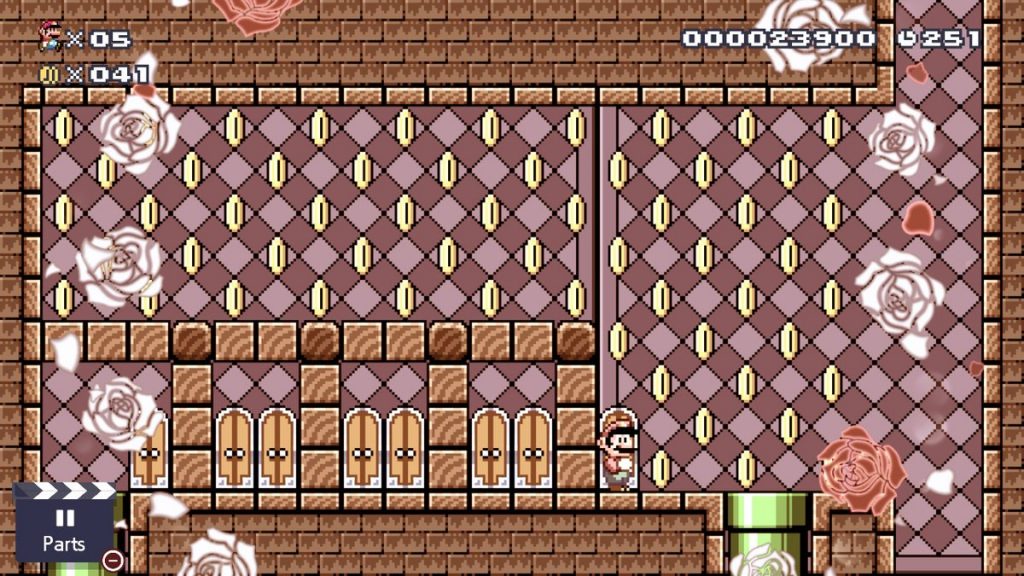 A bunch of coins and some lovely roses. Hey, I never said the True Ending was satisfying, but at least you’ll have more coins to reconstruct Peach’s Castle! Let us know in the comments below if you have any further questions, but in the meantime, check out our Super Mario Maker 2 Story Mode Guide!