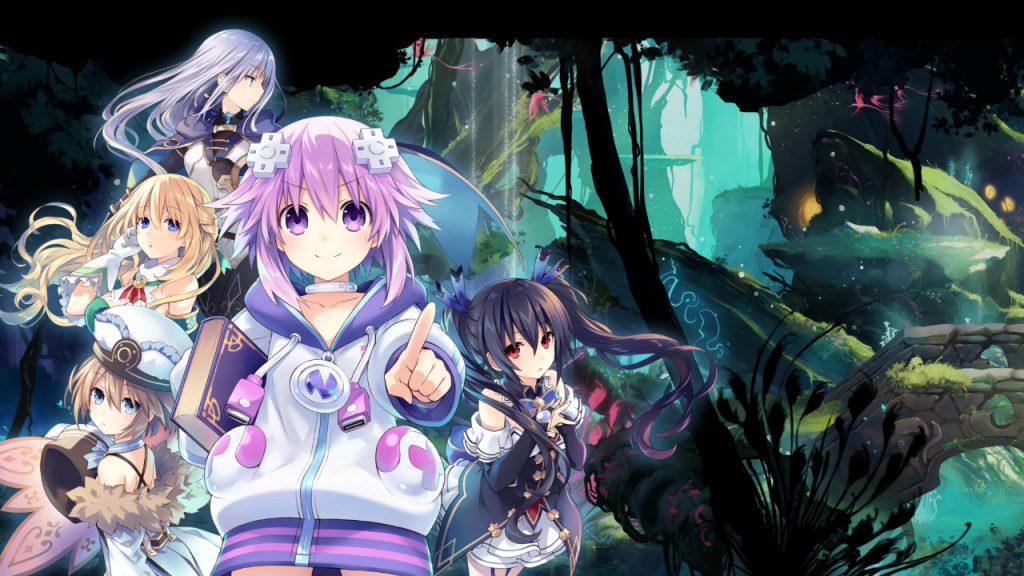 I’m going to preface this review by making something clear. I like the Neptunia franchise. I’ve been a fan of the series for a good few years now which, while that amount of time might not break any records, puts me in a comfortable position when it comes to judging Neptunia titles. At least in my opinion, anyway. I didn’t say that to argue about my place as a Neptunia fan, though. I did it so you would know that I wasn’t blindly bashing Super Neptunia RPG when I say that it’s… well, it’s not the best game in the franchise that I’ve played.

I know that Super Neptunia RPG has a lot of unique circumstances around it. Not only is it utilizing an entirely new genre and art style, but it’s even being developed by a different company all the way on the other side of the world. I know that there have been delays to improve the game’s quality and that it’s had a shaky development history. I think that Artisan Studios tried to do a good job, and I commend them for that. To be fair, I don’t even believe that Super Neptunia RPG is objectively bad. I definitely enjoyed parts of it. Unfortunately, it also felt, at times, like the game was going to fall apart at any minute. And that’s why, regardless of both my status as a fan of the franchise as well as my ability to sympathize with Artisan Studios, I’ve got to be honest about what’s going on with this title. 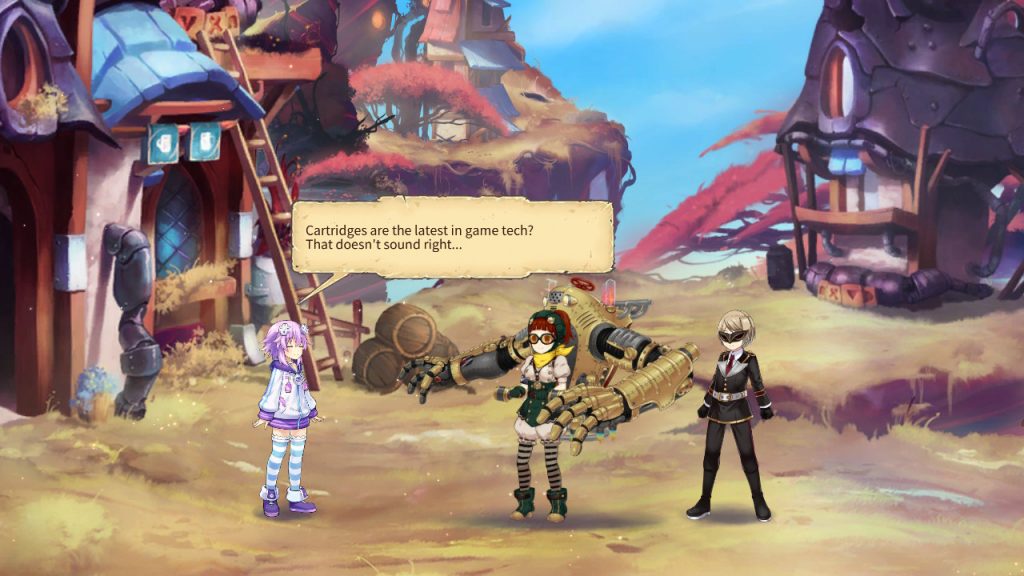 Methinks you’re onto something, Neptune.

Stop me if you’ve heard this one before: Neptune wakes up in an unfamiliar place, missing her memories, when… what’s that? You’ve heard this before? Well, you’re going to hear it again, because that’s exactly what happens in Super Neptunia RPG. It’s not the same old story that you’ve heard before, though (aside from the amnesia thing). Rather than falling out of a tower, Neptune this time finds herself waking up in a very unfamiliar-looking, two-dimensional, version of Lastation under the care of a group of individuals working for a group known as Bombyx Mori. Despite initially appearing to be the good guys, and even going so far as to (very temporarily) recruit Nep into their ranks, however, Bombyx Mori soon reveal their true colors — resulting in Neptune, and the rest of the CPUs, out on a journey to restore peace, as well as a third dimension, to this flat, flat world.

On paper, Super Neptunia RPG‘s story fits in with the rest of the games very well. As a franchise specializing in satirizing the world of video games, a literal battle of dimensions is a perfect fit. Unfortunately, its translation into the actual game didn’t go as smoothly as I felt it could. And, after some deliberation, I realized that it was largely due to the overall amount of story present within the game. Anyone who plays the Neptunia franchise can tell you that this game has a lot of dialogue. Seriously, the amount of exposition within most Neptunia games borders on visual novel territory. But Super Neptunia RPG doesn’t have that. Neptunia narratives typically use the abundance of dialogue to help their characters shine. And, with this game lacking in the usual Neptunia-esque abundance, its characters start to feel as flat as the rest of the game. 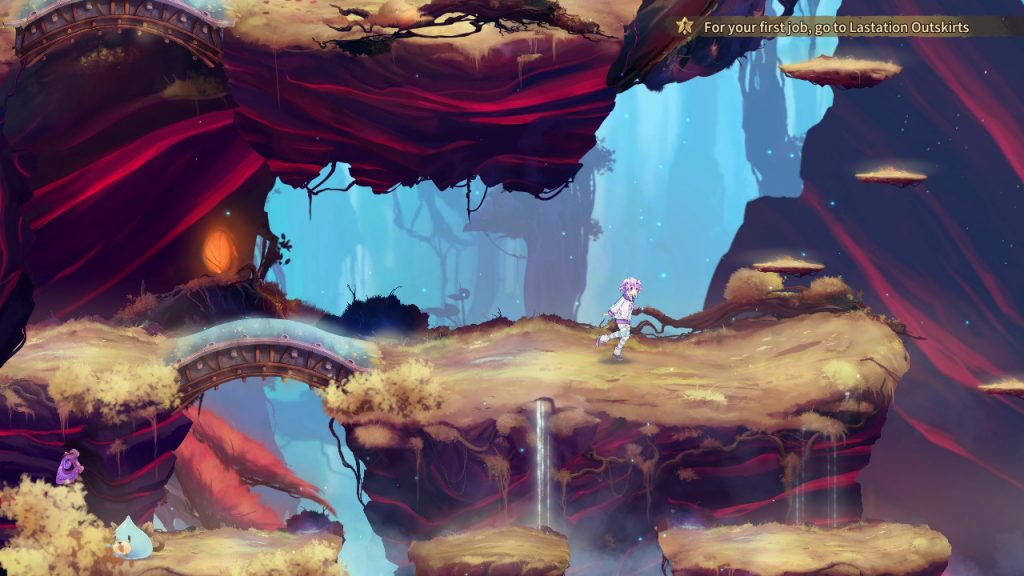 There’s a lot that you could say about Super Neptunia RPG, but you certainly can’t say that it doesn’t try new things — especially when it comes to implementing new game mechanics. Shedding itself of the staple Neptunia dungeon crawling-based exploration, Super Neptunia RPG instead shapes itself in a way that feels incredibly reminiscent of older 2D RPGs like Valkyrie Profile. Despite being an RPG, exploration presents itself in the style of a platformer, with players often needing to jump up, down, and around platformers as they make their way through this strange variation of Gamindustri — which, given game’s visually impressive landscapes, can be a pleasant experience at times.

Unfortunately, the game’s graphics, though they may be good, can’t compensate for a bland mechanical presentation. As this is still an RPG at its core, as opposed to being a Neptunia-themed Metroidvania (which IF should totally call a “Neptroidvania” if they ever decide to make one), I understand that Artisan Studios can’t make the platforming their core focus. However, because of a lack of progression with the platforming mechanics, they begin to get dull after a while. And this is made even worse by the fact that a good number places in the game barely use platforming mechanics at all, resulting in areas that essentially equate to mostly flat stretches of land that offer little incentive, or even ability, to explore. 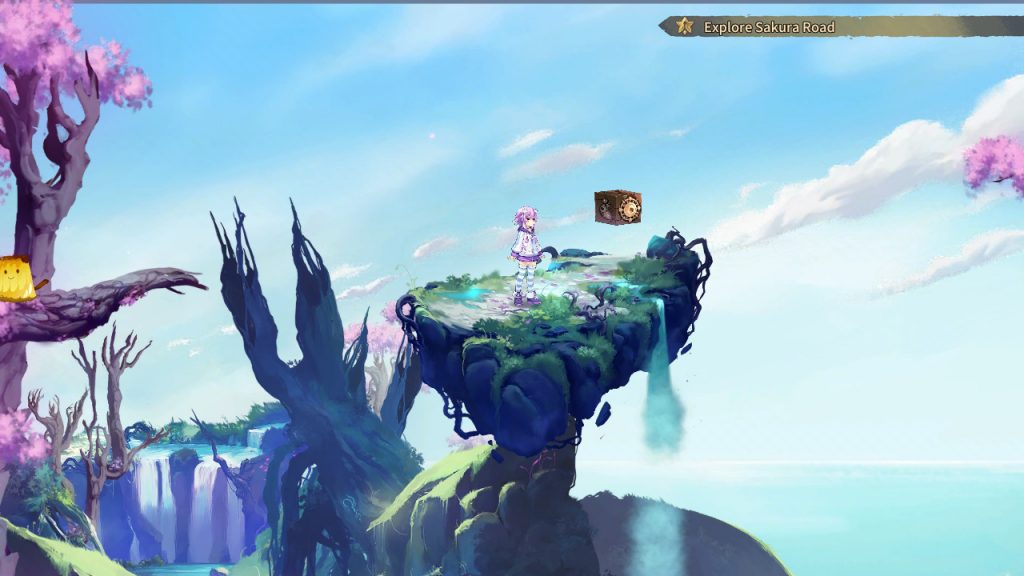 Be sure to explore when the opportunity presents itself!

Super Neptunia RPG also seems to be consistent when it comes to maintaining a low level of instability. Ironic, I know, but just hear me out. While I’ve never encountered anything that could reasonably be considered a major glitch, I couldn’t help but notice a number of “hiccups” as I played. Things like music skipping, enemies spawning in incorrect locations, and odd hit boxes weren’t entirely uncommon, and, in one case, I even had an area rapidly cycle through backgrounds before settling the appropriate one. A lack of major glitches (at least on my part) is nice and all, but there’s also something to be said when a game is constantly, albeit subtly, tripping over itself. It makes a game look like it wasn’t given the proper consideration during its development and, whether or not that’s actually true, it’s not a good look to have. 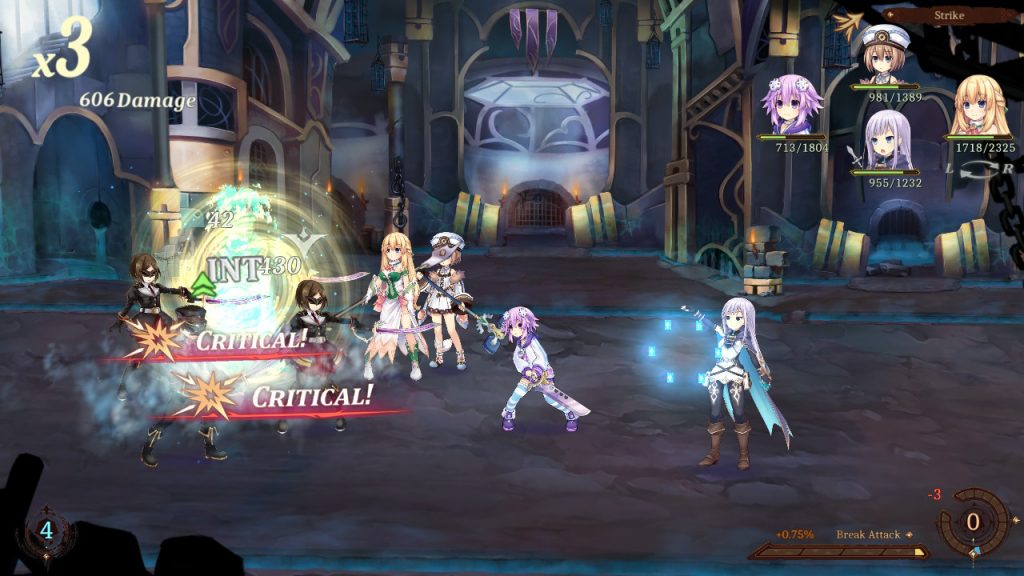 Each character has their own specialties, but strong-arming enemies is usually enough to get the job done.

Following in the footsteps of its own exploration mechanics, Super Neptunia RPG‘s combat also features a modified version of Valkyrie Profie-like mechanics. Utilizing ATB turn-based combat, both the player and enemies are allowed to freely attack by spending AP, which accumulates over time. Although each character is only allowed one skill at a time (with the player using said attack by pressing the corresponding button), players are allowed to switch their character formation— thus turning a total of 4 skills into a total of 16. What’s more, formations also provide passive effects — such as the Neptune-lead formation additional strength, or the Blanc-lead formation granting all characters a passive regen. Opposing attacks are also not allowed to stack, meaning that a character can’t use a skill while they’re being attacked, creating an additional layer of strategy as well.

Once again, this all sounds good on paper. However, it also, unfortunately, once again doesn’t work as well when it comes to the actual execution. As much as I hate to be blunt, combat feels, well, cheap. Despite the ability to strategize, the hectic combat environment generally isn’t conducive to anything outside of mindless button-mashing. Setting characters up with buffs takes too much time, with a lot of enemies going so far as to constantly chain hits on you until you actually strike back, and doing something as simple as switching formations — a key battle mechanic — literally lags the game (and don’t even get me started on the fast-forward lag). Between the halfhearted implementation of combat mechanics, and the strange ways in which characters move, it almost feels like I’m playing a mobile game. And that’s not something that I take any pleasure at all in saying.

Sometimes a game can be not-so-great, but still be fun. I have games like that I enjoy, and I’m sure those of you reading this right now do as well. A game with kind of “spark” that, for some reason or another, manages to help the good outshine the bad. But I just couldn’t find that spark with Super Neptunia RPG. Not wanting to play a game that I have to review isn’t anything new, but it legitimately made me sad that I had genuinely had to talk myself into playing this game before picking up my Switch. If you like the Neptunia series, then I don’t think that it would be a bad idea to check this game out. Just keep in mind that Neptune’s latest adventure, sadly, isn’t her greatest. And if you aren’t a fan of the series, then this probably isn’t the time to try getting into it.

Full disclosure: This review is based on a copy of Super Neptunia RPG given to Hey Poor Player by the publisher.

Persona 5 will steal your beating heart Atlus’ Persona series has exploded over the past few console generations. What was once a rather unassuming, niche RPG centered around creepy occult…