The Cadence of Hyrule Beginner’s Guide

Having a hard time with your rhythm? We got you covered. 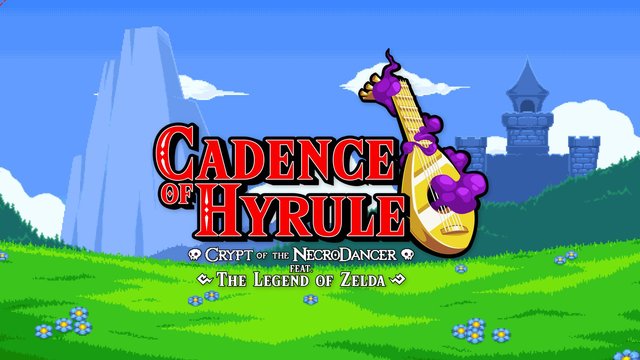 Can’t get your groove on in Cadence of Hyrule? Not even sure what, exactly, this new Zelda spin-off is? You’re hardly alone: many players have found  themselves struggling through this acclaimed follow-up to indie hit Crypt of the Necrodancer. Being that I happened to be one of these folks, I took it upon myself to extensively study the game for the sake of granting back-beating tips just for you. Without further ado, here’s Hey Poor Player’s Cadence of Hyrule Beginner’s Guide!

So, uh, what exactly is this game? How much is it like Zelda? 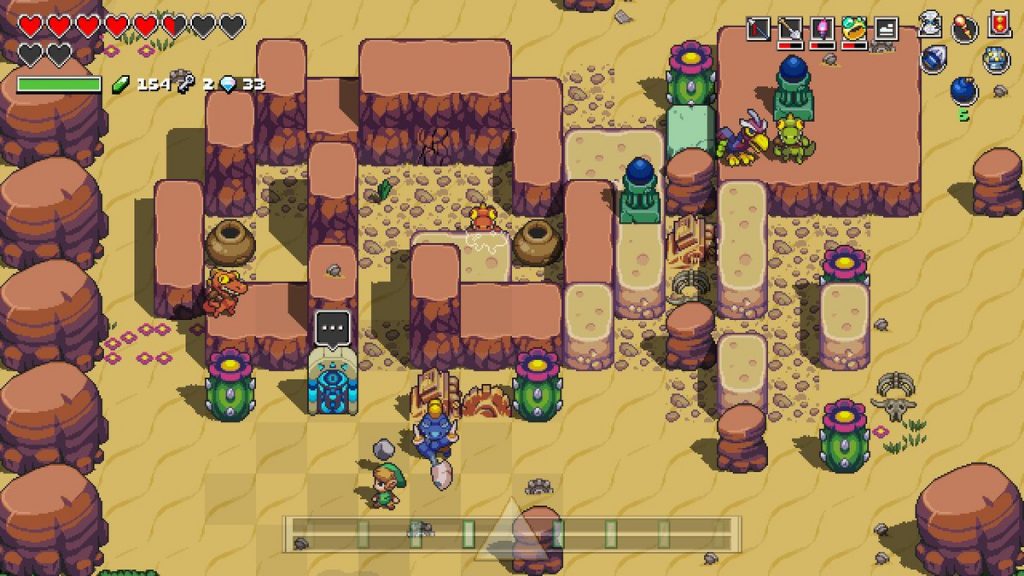 Cadence of Hyrule: Crypt of the NecroDancer featuring The Legend of Zelda isn’t merely a spin-off of Nintendo’s legendary franchise, but is moreso  a follow-up to 2015’s Crypt of the Necrodancer. A Brace Yourself Games indie title released back in 2015, this rhythm-based game was praised for its clever concept of cutthroat to-the-beat combat and traversal. The game stars the shovel-wielding Cadence, digging through randomly-generated dungeons in pursuit of the nefarious Necrodancer and fending off his groovy undead minions.

So how did a Zelda-themed iteration come to be? As it turns out, when Brace Yourself Games reached out to Nintendo for the possibility of Zelda DLC for Crypt of the NecroDancer‘s Switch port, Nintendo’s  welcome reception rapidly encouraged a full-fledged spin-off. Rumor has it this was likely spurred on by Zelda creator Shigeru Miyamoto and series producer Eiji Aonuma and their addiction to NecroDancer — talk about a dream come true!

While Cadence of Hyrule still adheres to NecroDancer‘s gameplay, there’s plenty of familiar Zelda elements for long-time fans to quickly latch onto — namely, numerous dungeons hosting keys and bosses, weapons and tools utilized to further explore Hyrule, and yes, gentle Cuccos that’ll snap at the faintest touch. With no shortage of riveting Zelda remixes (check out the music team here!) and A Link to the Past-inspired overworld, you’re in for a nostalgic good time.

Okay, cool, but moving to the beat is too hard and I keep getting my butt kicked. What’s the secret?

Yeah, no kidding — I know I certainly felt like this doggy meme in my first day of playing this. As we’ll repeat throughout, Cadence of Hyrule is about replayability, so it’s best to think of your first playthrough as a dry run of trial-and-error. It goes without saying you need to step in line with the Triforce beat indicator at the bottom of the screen, but if you’re like me, multi-tasking between keeping an eye on your movements and said indicator might prove too difficult. What’s an aspiring Hylian hero to do? 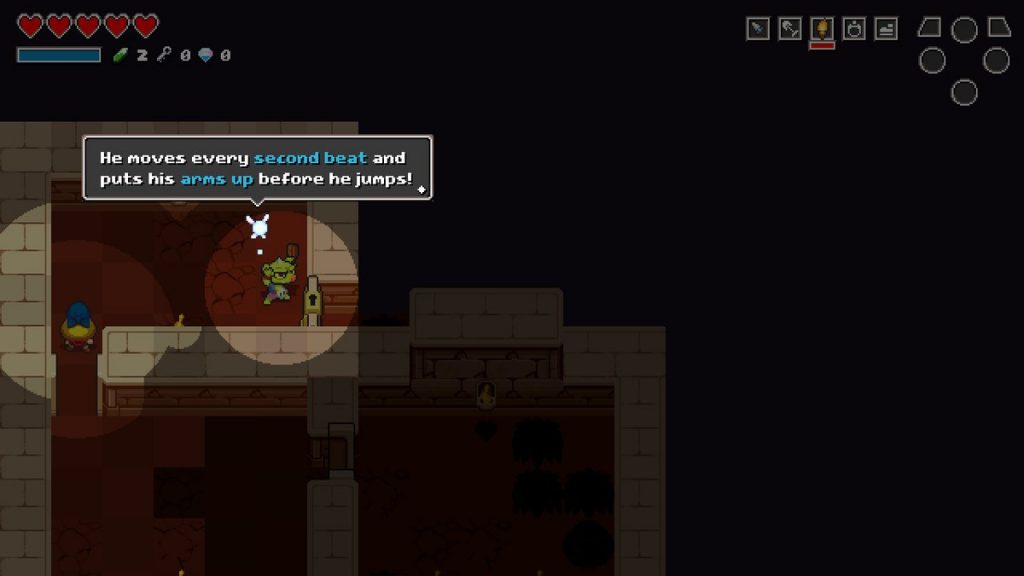 The key, as Trill the fairy points out above, is to observe the enemies’ dance patterns. While Cadence of Hyrule‘s constant swarms render this a tough task, the ensuing panic is likely overwhelming your concentration, rendering death inevitable. We recommend first analyzing bottom-rung enemies like Bokoblins — observe their “raise the roof!”-dictated movement, and you’ll gradually recognize how you can take advantage of their spacing to deal flawless blows. Remember that staying in one place is almost never a good idea, so focus on poke-and-evade tactics. (And hey, if it’s all still too much for you, you can always turn the rhythm off via Fixed-Beat Mode in the Options menu.)

Shields are also vital in understanding this system, with blocking attacks — thereby disrupting the enemies’ rhythm —  the only time you should be standing. (Actually, this is how I learned to deal with those pesky Yellow Stalfos.) Long-range weapons such as spears are also a huge help, but we’ll get into that in the diamond section.

I hear this game has a randomly generated overworld and dungeons? How does that work? 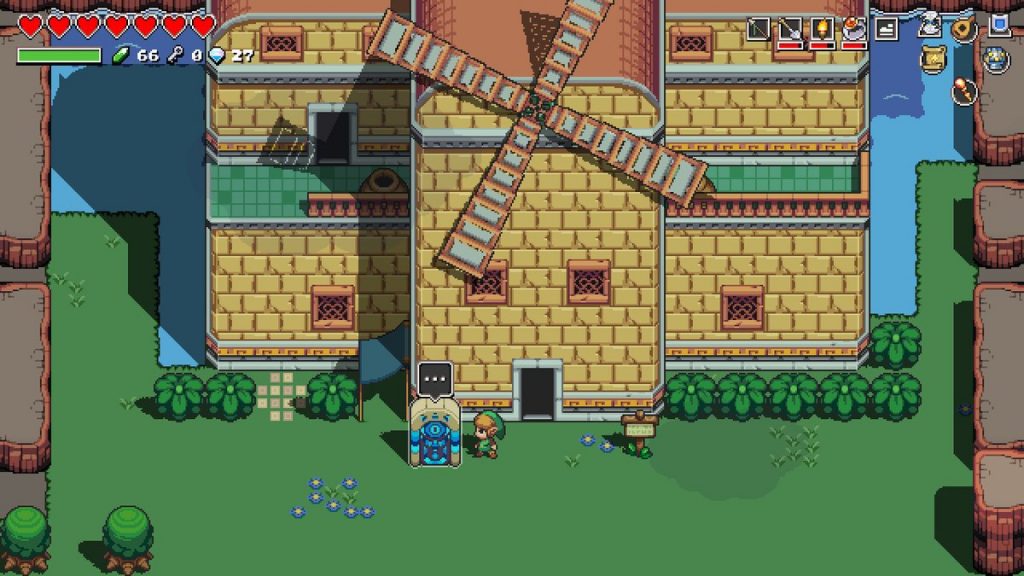 Yes, much like Crypt of the NecroDancer, no two playthroughs of Cadence of Hyrule are the same. While certain locations do follow loose rules — Lake Hylia is always just below Hyrule Castle, for instance — this rhythmic version of Hyrule always shifts locations to emphasize replayability. Each version is defined as a different “seed” (not to be confused with the in-game Deku Seeds), and once you eventually gain access to Custom Mode, you can customize and name your own seeds to enjoy and share with friends. Cool!

Dungeons and caves follow a similar pattern — while, say, you’ll always find the Lost Swamp within the Lost Woods, the layout within changes not merely every file, but upon death or even leaving the temple itself. Furthermore, all progress within an individual floor is lost upon death as well, so if you were felled within the final enemy room, tough luck; you’ll have to find its respective key again. Expect that scenario to happen more than once.

What’s the difference between Link and Zelda, and who should I visit first? And what about Cadence?

At the end of Cadence’s prologue, you’re given the choice to wake either Link or Zelda — the former a head-on offensive hero, and the latter a magic-wielding warrior princess. We highly recommend choosing Link — the reason being that Zelda’s MP-depleting spells in Nayru’s Love (a defensive barrier) and Din’s Fire (a ranged fireball) are designed for those already familiar with the mechanics and seek a challenge. Putting it this way: juggling your MP meter alongside attacking/defending renders an already tough game even harder to approach. As already mentioned, shielding is invaluable in prevailing over Cadence of Hyrule, so Link and his MP-free shield is the way to go.

As for Cadence, she’ll leave your company early on, but she’ll join up with you again just before you tackle the final dungeon. She’s quite similar to Link, albeit always equipped with her handy tunnel-digging Shovel. When you unlock Custom Mode, she can be customized to be available throughout the entire adventure.

So I keep finding these Diamonds…what should I spend them on? 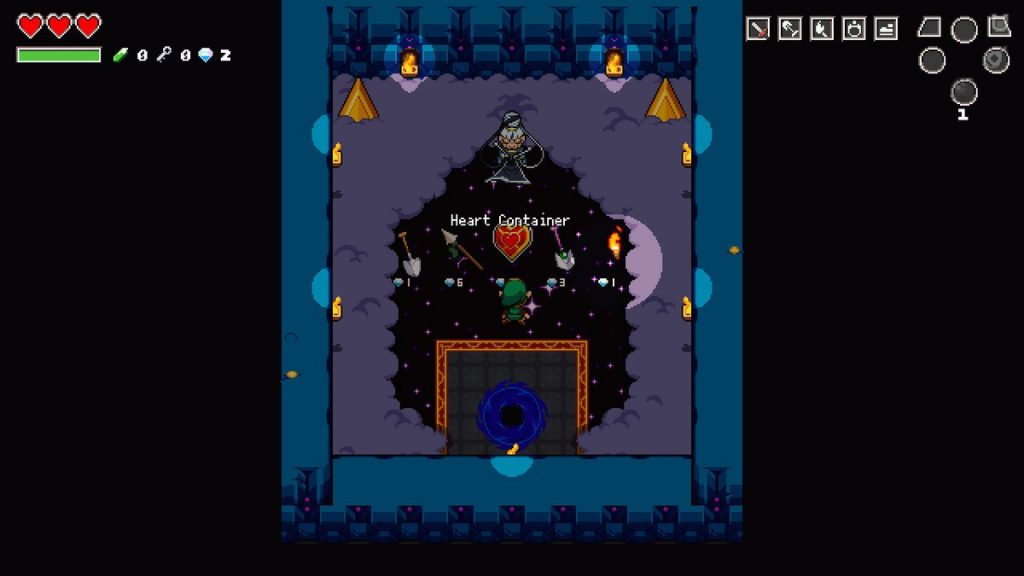 While Rupees remain Hyrule’s main currency, Diamonds are a special form of money spendable only in the shop void you visit upon death. To earn them requires a mastery of the beat indicator — whenever you clear out enemies without missing a beat and remaining uninjured, the indicator’s Triforce piece surges with green electricity; in other words, you’re killing it on the Hyrule dance floor! So long as you maintain this flawless state, you’ll always earn a diamond upon clearing a room of enemies.

Still, that’s easier said than done, so you can’t just spend diamonds willy-nilly. As the void’s selection often offers consumables you can easily find across Hyrule, we recommend only forking them over for special upgrades such as Pieces of Heart. The Spear is also a must — with its long reach, you can safely jab enemies from two tiles afar. “Safely” being relative, mind; my experience proves its hardly an impenetrable weapon, but it remains my weapon of choice two playthroughs in.

What’s with these floor buttons I keep pressing?

Ah, yes — decorating Hyrule’s surface are innumerable tiles that often affect your movement. Their purposes range from elaborate puzzles into deadly traps, so here’s a list detailing their functions:

Directional: Representing up, down, left, and right — all four directional buttons simply thrust you into their respective direction. These tiles’ purposes can range from forcing you into dead-end battles into puzzles requiring the use of certain tools to overcome.

Fast-Forward/Rewind: These two titles respectively either pick up the beat or slow it down. Press them if you either want a challenge or make things a tad easier.

Bomb: Like it says on the tin can — or should we say stone tile — this produces a bomb that’ll quickly explode. While it can be useful for crowd control, you’d best avoid this one if you already have bombs. 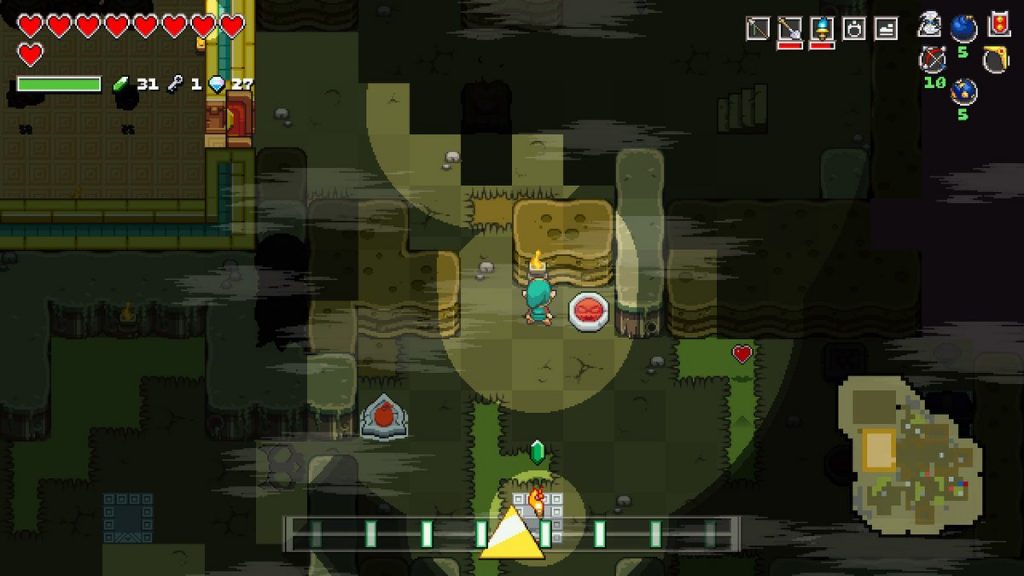 However…this is a tad embarrassing to admit, but we’ve yet to find a use for this facial button. As far as we can tell, pressing it only exudes a brief cloud of purple smoke, and, uh, that’s it. It doesn’t affect your movement, it doesn’t do a thing to enemies, it just…smokes. We’ll get back to you on this the moment we figure it out, but if you happen the answer, let us know ASAP!

So I heard there’s Daily Challenges? What’s that about?

The Daily Challenges are available within Challenge Mode, and they present the hardest challenge Cadence of Hyrule has to offer: Permadeath Mode! While that’s already an option for your customized seeds, the Daily Challenges go a step further by not only randomizing your protagonist, but only offering one chance to clear its selective world. More than anything, this mode truly emphasizes Cadence of Hyrule‘s replayability, and we imagine those especially taken by the game will be active participants. Think you’re up for it? 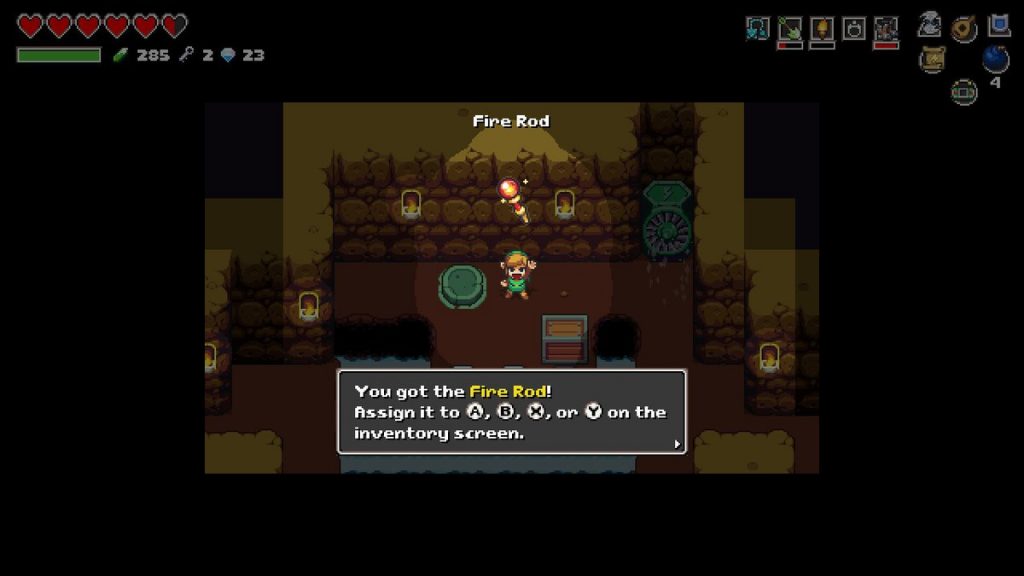 There’s plenty of other questions we could answer, but we’ll direct them further to our Cadence of Hyrule guide hub. If we still don’t the answer you seek, give us a holler in the comments below! 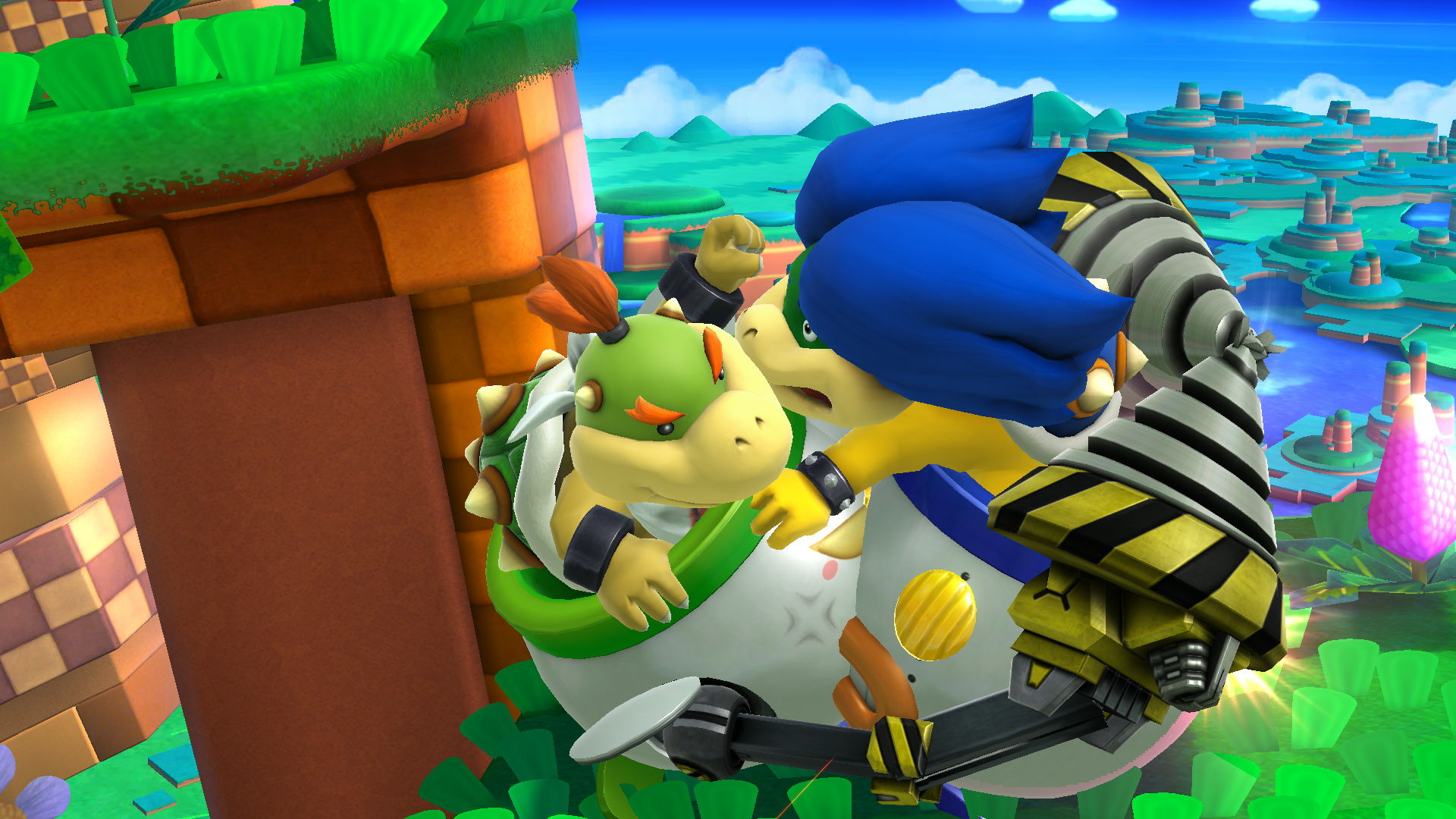 For Fun, For Glory – Super Smash Bros for Wii U delivers a pulverizing smash of fun and action!   Well, the time has come. All the waiting, all…