Hot And Spicy Poochy On The Run 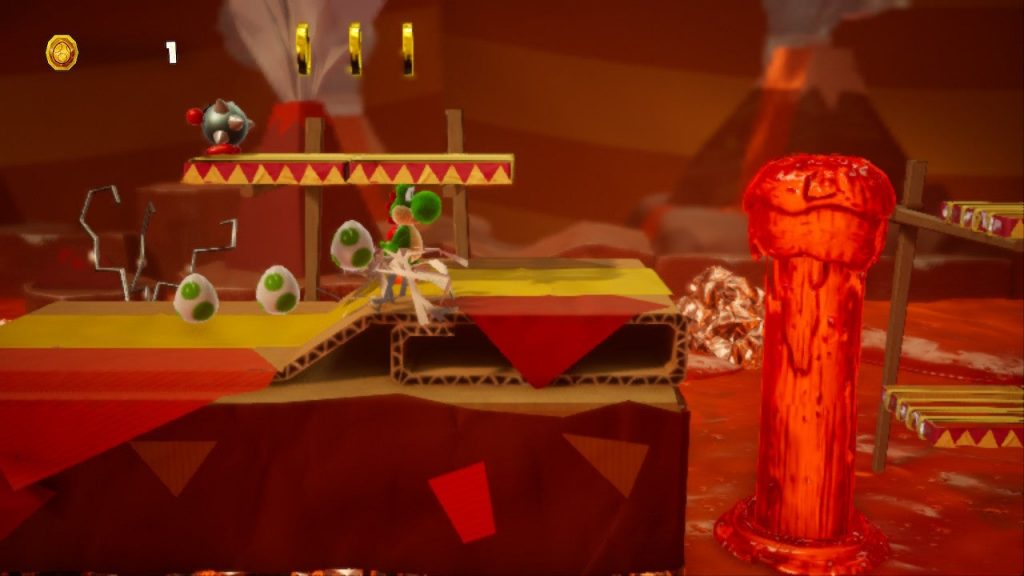 Just when Yoshi thought he’d have to do all the heavy lifting on his own, an old pal comes out to play. Poochy is his name and being helpful and downright adorable is his game. Yoshi’s pal has come to help us take out some baddies, reach some otherwise unreachable areas, and just be plain helpful. isn’t this just grand?

Once you start the stage, you’ll find a Question Cloud appearing from spewing magma. Look near the rubberband platforms. Hit the cloud and you’ll get some coins, 4 of which are red (4/20). Collect your first batch of hearts and further to the right there will be 3 coins, 1 of those is a red one just for you (5/20). Well, look who it is! It’s good ‘ol Poochy. ride him all the way to the right until you’re near a huge platform that you need to jump to. There will be 3 coins on top, and just after it is a cloud. Hit the cloud and you’ll get 4 red coins (9/20).

After getting your 3rd flower, you’ll reach an area with a whole bunch of boxes lined up. Hit it with your trusty ground pound and ride our four-legged puppy pal to the left side. Eventually, you’ll fall into some magma. Swim to the right and claim 3 red coins (12/20). Right after you’ve received your most recent coin (12th), look in the background for a present box. Hit it and get your next red coin (13/20). To the right of the present box lies a coin arc. Jump across and the last coin will be your next red one, go ahead and snatch that sucker up (14/20). A short walk after your last coin, Yoshi will end up in a pool of magma, give Poochy some time to jump to it. During that time you should head over to the platform to the upper right. There will be Question Mark cloud there that will reveal coins. Ride Poochy right on through the magma and your next 3 red coins will be yours (17/20).

Pass by the checkpoint and you’ll see some more magma spouting from the bottom of the screen. A Question Mark cloud will appear, hit it and an arc of coins will appear. Collect them and 1 coin among them will be a red one (18/20). These coins just keep popping up one after the other shortly after getting your 18th coin, look for an egg box for you to use. Head to the right and you’ll run into another Magma Blargg. There you’ll see 2 coins beneath a platform. Head to the right side and aim towards the left and hit the Magma Blargg along the way while you get your last two red coins (20/20). 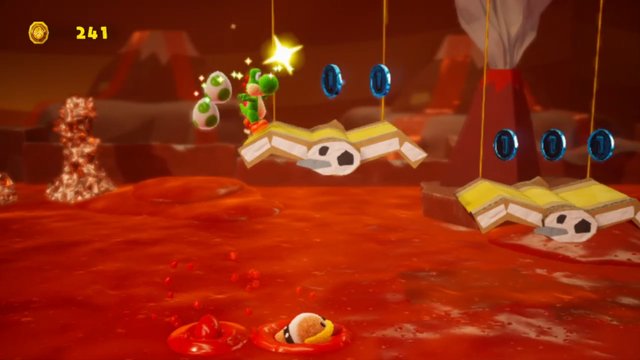 Yoshi will eventually reach a section with a few platforms and a Blargg just waiting in the magma to be a pain in the butt. Jump to the top platform to reveal a Question Mark Winged Cloud and hit it with an egg. Then you will receive your first flower (1/5). Moving a little further along, collect your first patch of hearts, where you found your 5th red coin there will be an arc of coins ahead. Flutter Jump through the coins to reveal a Question Mark Winged cloud. Pop the cloud with an egg to reveal the second flower (2/5).

After collecting your 9th red coin, stand on the sinking platform to the right of Poochy. Let him swim through the magma and eventually your next flower will appear to your right (3/5). You’ll find an area with a clock cloud floating above, hit that sucker and 5 apples will appear. There will be apples on each platform and three below. You know what to do here. Let Yoshi devour the apples and get your next flower (4/5). Another mini-game will happen when you hit the Blue Clock Winged Cloud while riding our fire-proof puppy pal. Collect all the blue coins before the timer runs out. Get ready to jump up onto a platform and then drop on down onto Poochy, ride him to the finish line (5/5). 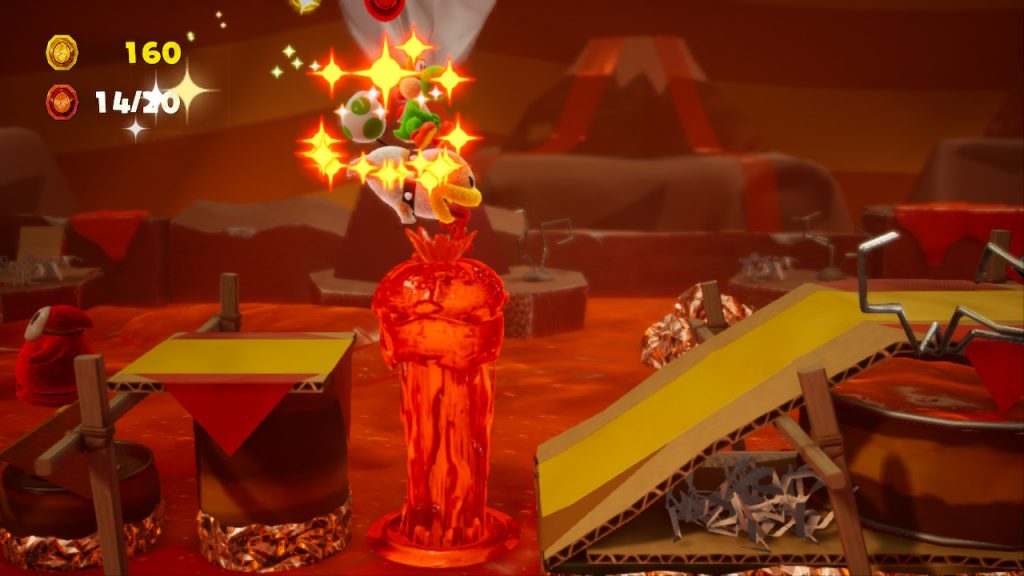 What are we gonna do with these puppies? Once again, they are out and about causing Yoshi a headache. You’ll encounter the first pup around the starting area. Wait for the magma spout to drop before going down to get him (1/3). Once you pass through the checkpoint you’ll see that platform with a lot of cardboard boxes in a row. The second pup will be swimming in the magma and apparently, he’s fire-proof too. Use your ultimate technique, the ground pound on the cardboard box so you can reach the gap. Once in position just give him a shot with your egg or pup 1. You can aim to the lower right and have your shot bounce to him pup 2 if you want to be flashy (2/3). Pass through the second checkpoint, look for the platform with the egg box on top and two of the weird metal monsters. Hop up on the platform until it sinks, the final poochy is there standing on a rock in the background waiting to be saved (3/3). 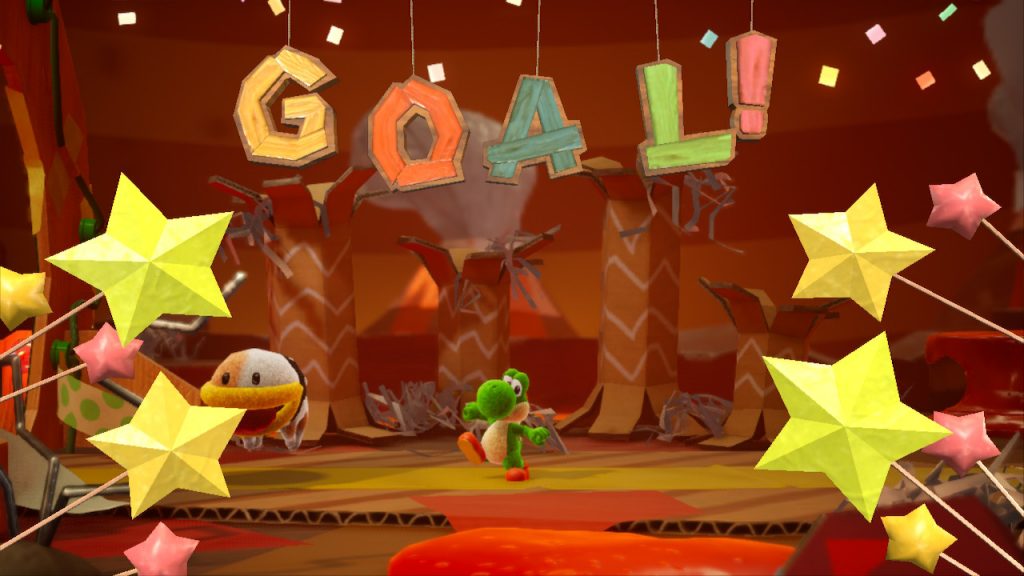 These are the souvenirs you can find on the flip side and the front side of the stage, so be on the lookout.

Blargg Rock: In the background after your first encounter with the Magma Blargg.

Well, that about wraps it all up for Poochy’s Magma Run and we at Hey Poor Player hope that this guide helps you and Yoshi along the way.  If you’ve got any questions or comments go ahead and sound off in the comment section below, and don’t forget to check out our Yoshi’s Crafted World guide hub for more helpful collectibles guides. 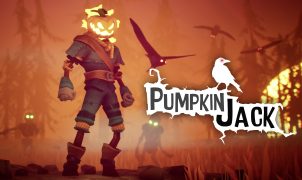