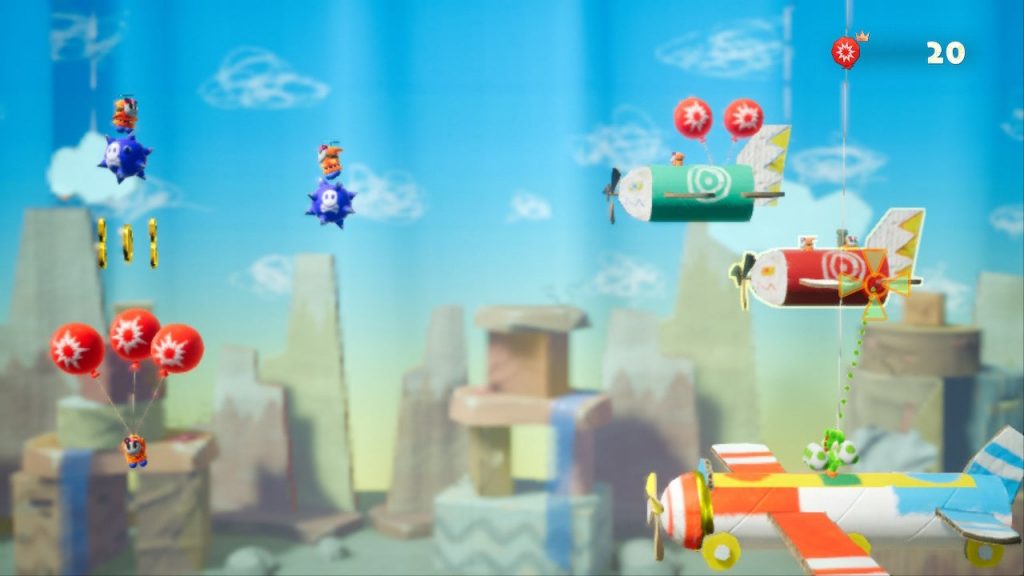 Our grand, green pilot Yoshi is here to pop some balloons and show off his ace piloting skills against these Shy Guys. So, time to strap up those goggles and get ready to dogfight your way through this perilous flying conundrum. This guide is here to help you along the way as you gather up your red coins, smiley flowers, Poochy pups, and souvenirs. Let’s do it to it! 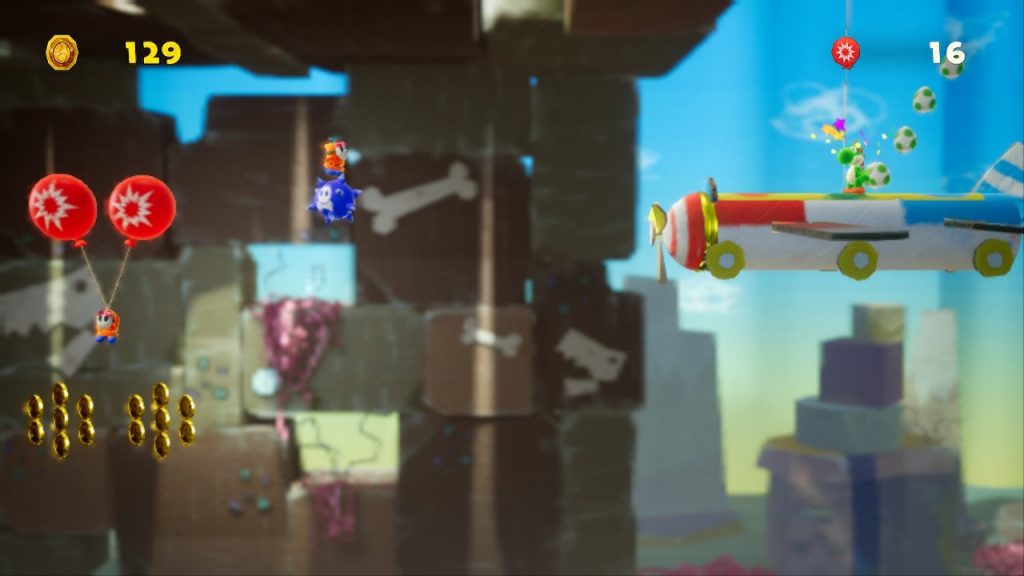 As you go through the stage, you’ll run into some random enemy planes. Once the first red plane gets into range, shoot the gift box on its wing to get the coins, including the 1 red coin (9/20). There will be another red plane a little ways ahead of in the distance. Shoot it to get more coins and a red one will be included (10/20). After encountering a second large Shy Guy and some heart strings float down to you, there will be some spiked balls just ahead. Just pop the red balloon and collect the coins above it to get 3 red coins (13/20). Continue along until you find two more  spiked balls with a group of coins in the middle of them. Moving past the second purple spiked ball you’ll notice three coins. Collect those bad boys to get 3 red coins instead (16/20).

You’ll see yet another Shy Guy holding on to 3 balloons as , collect the coins under him to get your 3 red coins (19/20). Two more planes will appear from a distance. Use those ace piloting skills to shoot down the red plane to collect your bounty, the last red coin (20/20). 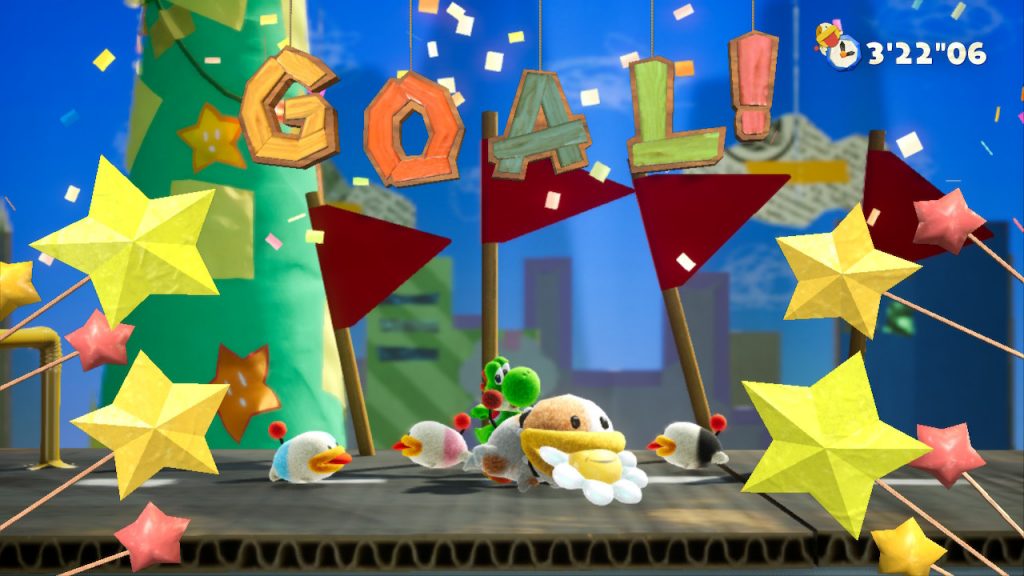 Three of this stage’s Smiley Flowers can be obtained just by simply achieving a high enough score, which means less work for our fuzzy green pal. The first Flower can be located high above the red balloon holding the Shy Guy. On both sides, you’ll see a cluster of coins the flower will be located in this mess (1/2). After the second wave of enemy planes, of course, there will be more enemies, 3 Shy Guys positioned slightly diagonally to be exact. They’re all floating in the air thanks to those red balloons. Look above them, there’s your last flower (2/2). That’s all for the flowers. See. Simple, right? 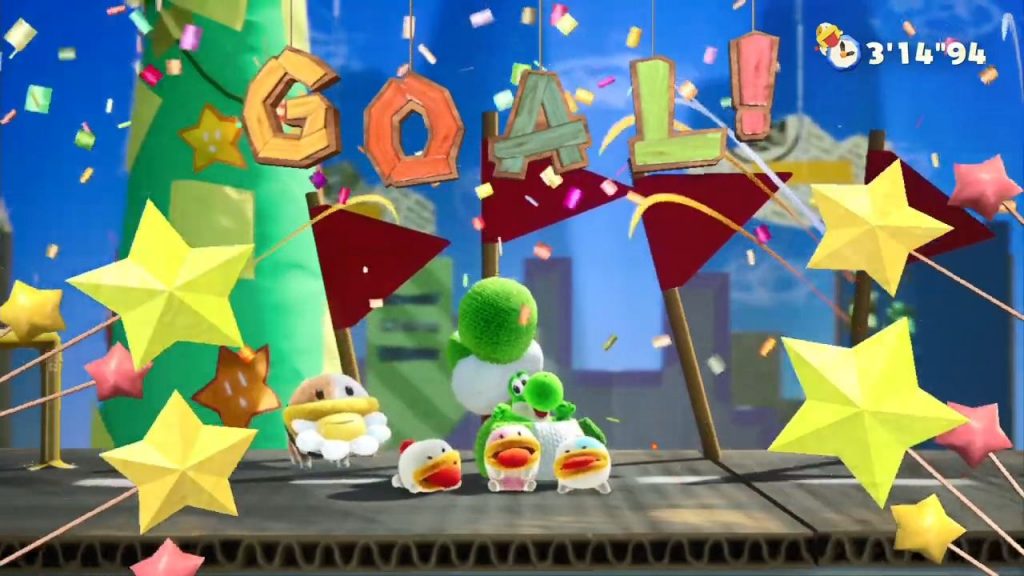 Once again, someone let our pups run rampant. And, once again, Yoshi’s got to do all the work to get them back. Once you pass through the first set of purple spiked balls, you’ll find this poochy pup hanging upside down on a red balloon floating happily as can be (1/3). Now once your plane turns around, you’ll spot a group of random UFOs. Shoot your eggs at the purple one five times and get the second pup (2/3). Once you get the string of hearts (checkpoint), yet another purple flying saucer will appear, look for pup dangling under it (3/3). 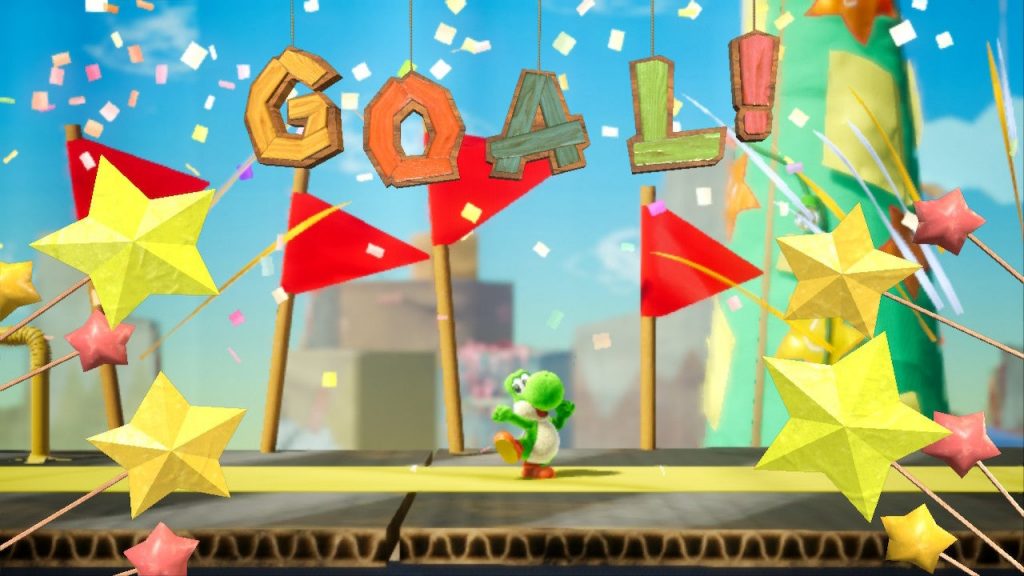 Golden UFO 1: Play through the stage and try to dodge all blue balloons. Towards the middle of the stage before making a huge turn, look for the first UFO located in the background by some clouds. Keep an eye out for a parachute with hearts. It should appear by the time you reach the spot.

Golden UFO 2: Keep on going until your about to turn to the right, look for your second saucer located on the top of a tower. It’s near your first one so keep an eye out.

Golden UFO 3: Where you found the second Poochy, a few UFOs will appear in the background behind the clouds. Go ahead and give the lower UFO a whack to get the final one.

Well everybody, that about wraps up another epic adventure for or buddy Yoshi and we hope this will help guide you along. Don’t forget to check out our Yoshi’s Crafted World guide hub for more guides. 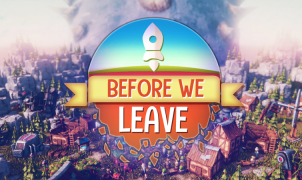 Before We Leave Review: A Cozy 4X Perfect For Consoles Before We Leave is consistently pleasant. Between its adorable look, calming music, and zen gameplay experience, I spent most…