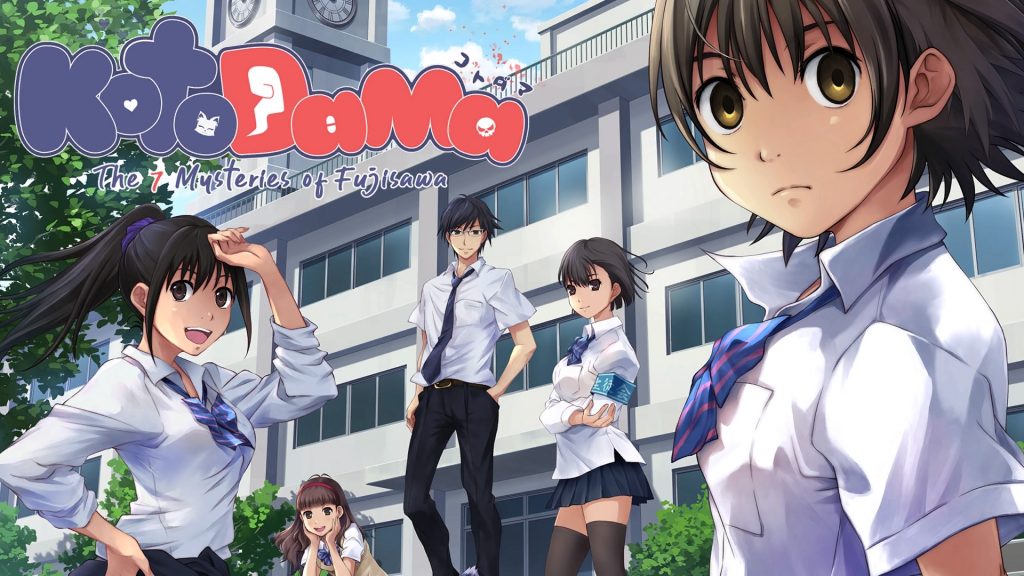 Making the jump from video game publisher to a developer isn’t something that you see too often, especially when said company’s been publishing for quite some time. While the two may seem similar to the untrained eye, there’s a world of difference between the two, and it can be very difficult to get into one side of the developer/publisher duology if you only have experience with one — and that goes double for companies solely dedicated to publishing video games. And that’s exactly why I was so interested in Kotodama: The 7 Mysteries of Fujisawa.

To the uninitiated, Kotodama may just look like another mystery-filled, school-themed visual novel. And that isn’t technically wrong — that is what it is. But what made this game especially appealing to me was the fact that it was developed by PQube. A publisher specializing in, among other things, wonderfully niche Japanese games, the UK-based PQube has had plenty of experience with Japanese games, but, until now, no real experience with developing them from the ground up. And Kotodama? Well, PQube did a pretty nice job with it. It’s obvious that PQube both knows what they’re doing, and is dedicated to creating something that their pre-existing fanbase can enjoy. It’s not perfect, no. But it’s a darn good first try! 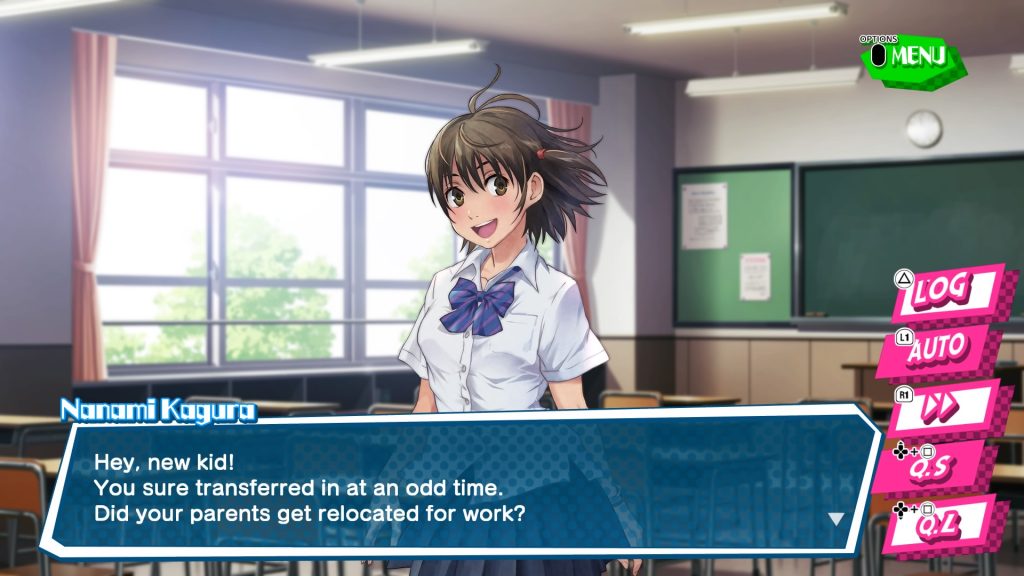 Well, I definitely didn’t move because of any demons! Really!

Kotodama‘s school days-esque story begins not at the beginning of the school year, but somewhere in the middle. Having moved schools to the prestigious Fujisawa Academy after an undisclosed incident regarding a demon named “Mon-chan” (a fox-like creature with whom you have since formed a pact), you, the new kid in town, are trying to live out the rest of your semester in (relative) peace, rather than attracting oddities toward you as you usually do. Unfortunately, for you, however, that isn’t happening. No sooner than you are able to gain your bearings do you find yourself roped into the school’s Occult Research Club by resident Fujisawa weirdo Nanami Kagura in order to help them uncover the mysteries behind the school’s seven mysteries. And, while some of these mysteries seem off from the get-go, it doesn’t take long for you to realize just how off Fujisawa’s mysteries really are.

In all honesty, I enjoyed most of what Kotodama had to offer. Its intentional use of tropes and knack for turning things on its head made the game an enjoyable experience, and it was very good at leading players on throughout most of the game. But that’s where this game runs into its biggest issue. Now, baiting players with tidbits of information isn’t anything new for a visual novel. In fact, I would almost argue for it being mandatory. It’s just as important, however, to give the player closure. I totally get that some things need to be mysterious, and that not every strange happening needs to have some kind of overbearingly extensive backstory, but, generally speaking, you need to properly conclude all of a story’s important parts. Kotodama… doesn’t really do that. At least, not in as thorough a manner as I would have liked. 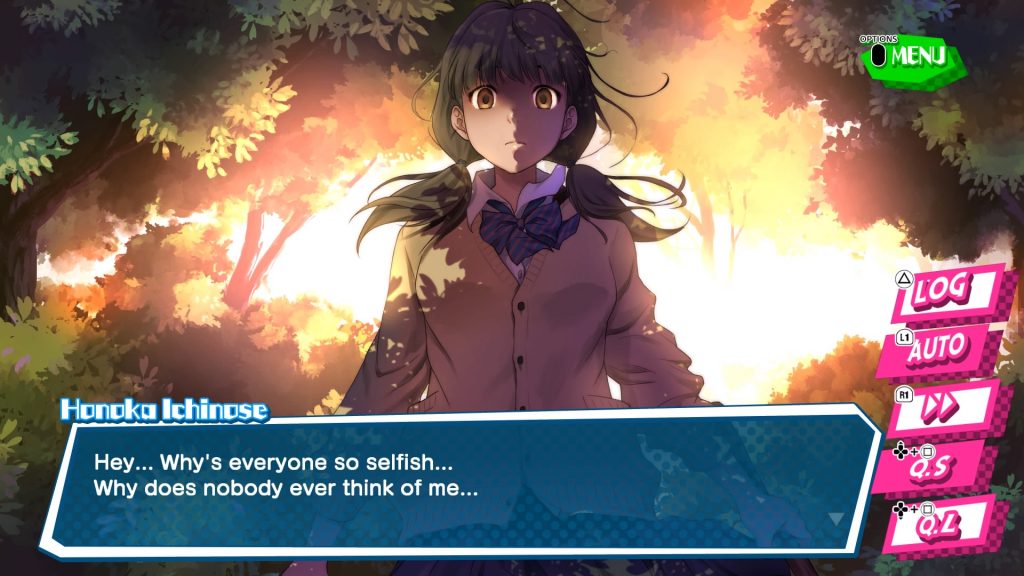 I bet that I can think of a good reason why…

From the very beginning, Kotodama begins playing with expectations thanks to its use of tropes and (minor spoiler) time travel trickery (end spoiler). It starts off slowly, but by the time you reach the end the game has gone in so many directions so quickly that you aren’t sure where things are going to stand when all of the dust settles — only for said metaphorical dust to never actually do much settling. You know how when you’re in the middle of a really juicy part of a visual novel (or any kind of story, for that matter), that your adrenaline starts pumping in anticipation of what’s going to come next? Well, that adrenaline was still pumping as the credits rolled. And that’s not supposed to happen.

I thought that I had messed up somewhere — that I had gotten some kind of bad ending, and missed the resolution that I was so desperately craving. But I didn’t. Rather than smoothing things out, the ending, in all of its strange pacing, left me with more questions than I had at the beginning. While that in itself is bad, the truly frustrating part was that this game had so much potential to end things spectacularly. There are so many things that this game only briefly touches upon, only to never really come back to them in the end. This game absolutely needs some kind of major story update or “Kotodama Plus” version in the future. Without it, things are never going to totally sit right, and I really think that PQube has the talent to make the game into something even better than it already is. 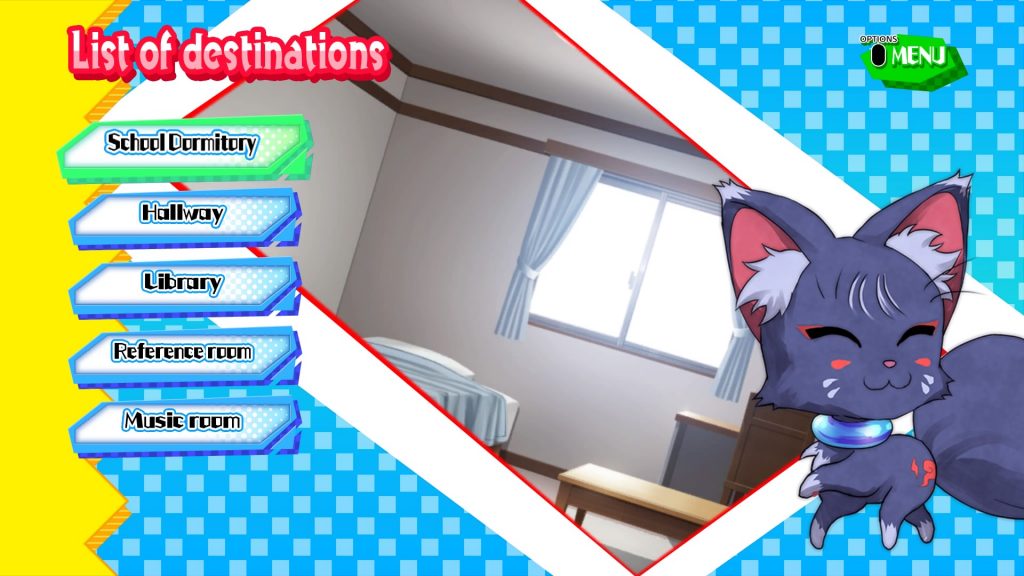 Where to go first…?

Kotodama may be a visual novel, but, as I’m sure many of you are already aware, it doesn’t follow all of the normal VN tropes. One way in which it asserts its own VN autonomy is by allowing the player to play a slightly larger role within the story. Alongside the obvious question prompts that it offers from time to time, much of Kotodama is carried out through exploration. Well, “exploration” in a VN-related sense. Throughout almost all of its chapters, players are required to sniff out information on their own by walking around to key points on campus — and it’s up to players to decide which order they want to visit said areas in.

While the game makes it clear that, in most cases, every area needs to be visited in order to make progress, what it doesn’t make as clear is the fact that the order in which you visit these places can affect how certain parts of the game play out. While something like this may seem small to those of you less familiar with VNs, this small additional layer of player engagement can actually make a huge impact on immersion. Rather than passively reading through a story (and, as a VN fan, I’m absolutely not bashing that), the fact that you’re allowed somewhat to consistently steer the story in your preferred direction is a lot of fun.

Puzzle for Your Thoughts? 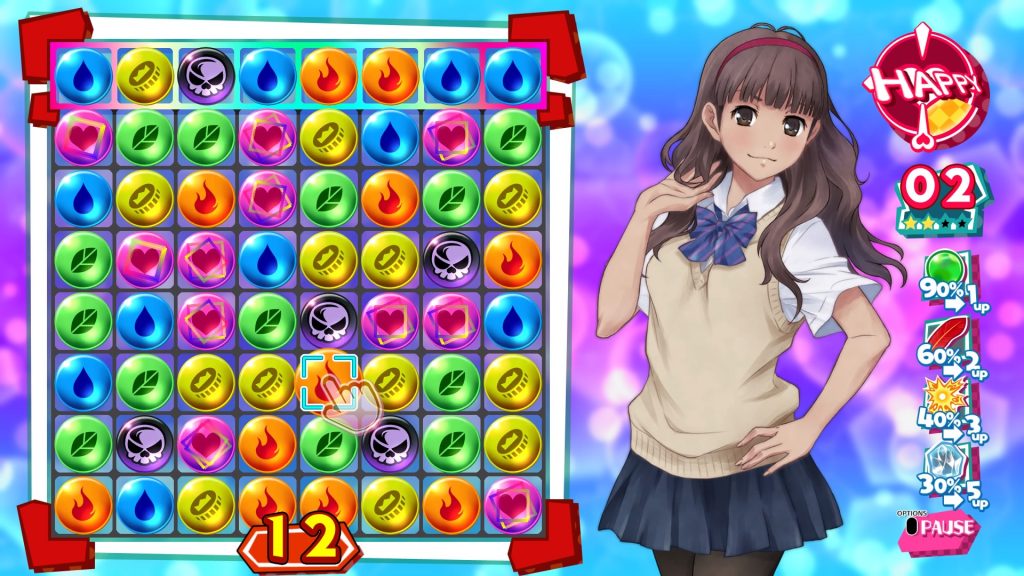 Player pathfinding may be nice and all, but there’s obviously no getting around that Kotodama‘s biggest gimmick lies within the literal puzzles that it throws at players. Throughout the game, there will be times when you come across someone who is privy to information that’s crucial to your student sleuthing — information that they aren’t willing to tell you. Fortunately for you, that isn’t a problem! Thanks to the ability bestowed upon you by your demon friend Mon-chan, you have ways of making them talk.

Kotodama‘s plentiful puzzle games are easy enough to get the hang of. Taking place in a simple “match-3” style, players are able to move the orbs from their current position to the top of the board by selecting them. For each pair of three or more that they match, their target’s “Happy” Gauge will fill up, with the overall goal being for players to fill the gauge all the way up before they run out of moves. Admittedly, some of this is based on luck, but Kotodama makes things a little easier due to its forgiving nature. For every fourth of the gauge that the player fills up, they will receive 10 additional moves — along with the added “bonus” of removing some of their target’s clothing. Additionally, players are allowed to participate in challenge mini-games, wherein they try to find the… erm… “sweet spot” on their target’s body. However, while successfully pulling it off does net you some extra turns, failing to do so results in some pretty hefty penalties. 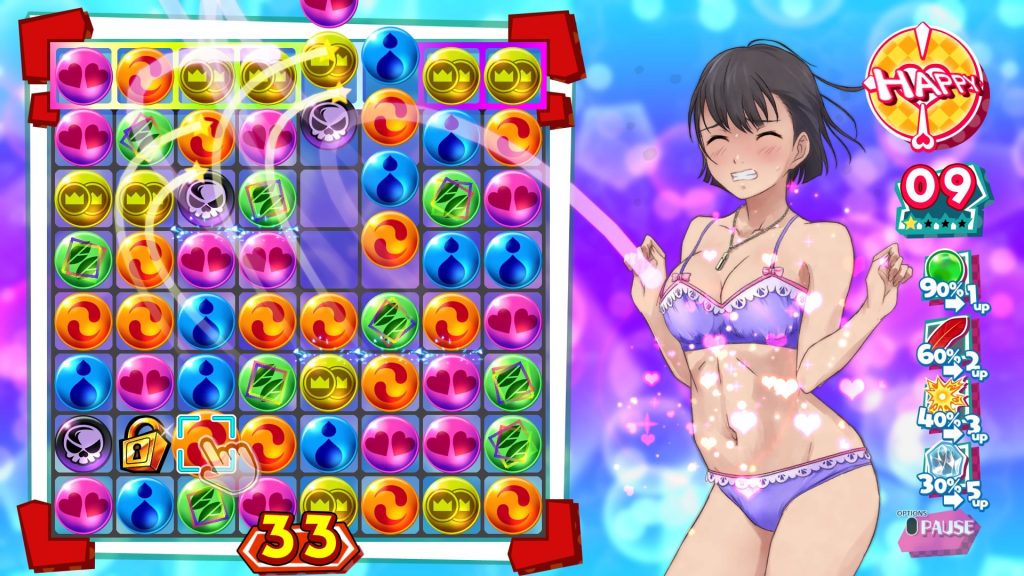 Pulling off big combos is one part luck, one part skill.

Although I couldn’t help feeling a little bit like PQube was attempting not to go all-out with its puzzle segment, I appreciated them trying to test the waters. A VN/puzzle hybrid isn’t something that comes along very often, but the two went together nicely. Not only did the puzzles help to break up the potential tedium which could occur during the VN segments, but their inclusion was actually relevant to the story. I do feel like this segment could have been fleshed out more (no pun intended), but I understand that Kotodama is a VN before a puzzle game, so I suppose that I can’t complain about it too much.

PQube’s jump into the world of video game development took a lot of guts and Kotodama: The 7 Mysteries of Fujisawa was a good first try from them. While I might have had a handful of things to say about the game, specifically in regard to how it handles its own ending, I really did enjoy my time with the game. Even more importantly, however, is the fact that this game shows that PQube, at least in this reviewer’s opinion, has what it takes to create their own game from time to time. Sure it takes some time to truly refine the process, but, if Kotodama‘s anything to go by, then I’d say that they have a pretty promising future.

Full disclosure: This review is based on a copy of Kotodama: The 7 Mysteries of Fujisawa given to Hey Poor Player by the publisher.