I have a confession to make: I’ve never been the biggest fan of ‘Eurostyle’ run-n-gun games. That’s not to say I have anything against the genre as a whole. It’s just I’ve always preferred the more straightforward action of games like Metal Slug and Contra, where you rush toward the right side of the screen mowing down everything in your path before toppling a towering boss. With their labyrinthine levels and focus on precision platforming, games like Turrican and its ilk just weren’t my cup of tea.

Well, now that I’ve spent the better part of the past week blasting baddies in Gunlord X, I think I can finally say I’ve seen the light. Initially developed for the Neo Geo back in 2012 and later ported to the Sega Dreamcast (read our review of that version here) this frantic title from two-man indie studio NG:DEV TEAM is pure 16-bit bliss. Featuring tense gunplay, sprawling levels, lushly detailed sprites, and an unforgettable soundtrack, Gunlord X is one of the most satisfying retro-style shootouts I’ve experienced in ages.

Armed To The Teeth 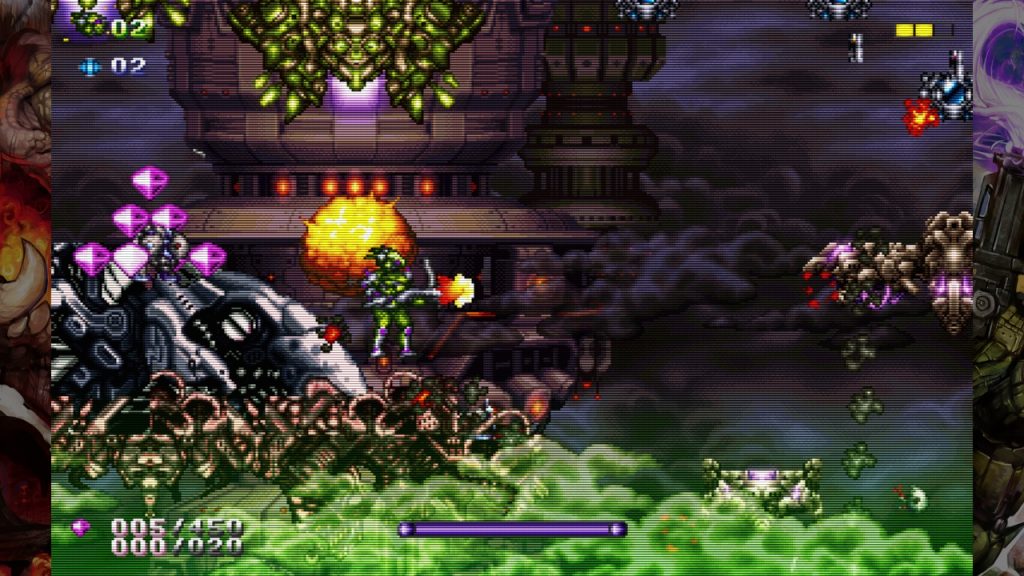 In Gunlord X, you play as the game’s titular hero, who just so happens to look a bit like the bastard child of Black Panther and Halo’s Master Chief. The goal of each stage is simple: make your way through each maze-like area and reduce any baddies who get in your way into scrap metal before tackling a massive boss creature.

Being the Gunlord, it goes without saying that you’ve got a ton of different weapons at your disposal. These tools of destruction range from your standard spread shot and napalm blasts to more exotic weaponry like bullets that ricochet wildly across the screen. You’ll find each of these weapons comes in handy in different situations. Thankfully, you’ll be able to swap them out regularly from pod-like units that appear all over each stage.

My favorite weapon of the bunch has to be the Beam Laser. This handy tool is always at your disposal, and you can aim its devastating stream of death a full 360 degrees with the right stick. Not only does it make quick work of waves of enemies, but it can also destroy most incoming bullets. Throughout the game, you’ll find it necessary to switch back and forth between your standard weapons and Beam Laser constantly if you want to survive what Gunlord X throws your way.

If that isn’t enough, you can even channel your inner Samus Aran with a Morph Ball-like ability complete with bomb-dropping power. This ability is especially helpful when it comes to exploring narrow pathways to find tucked away gems and extra lives. 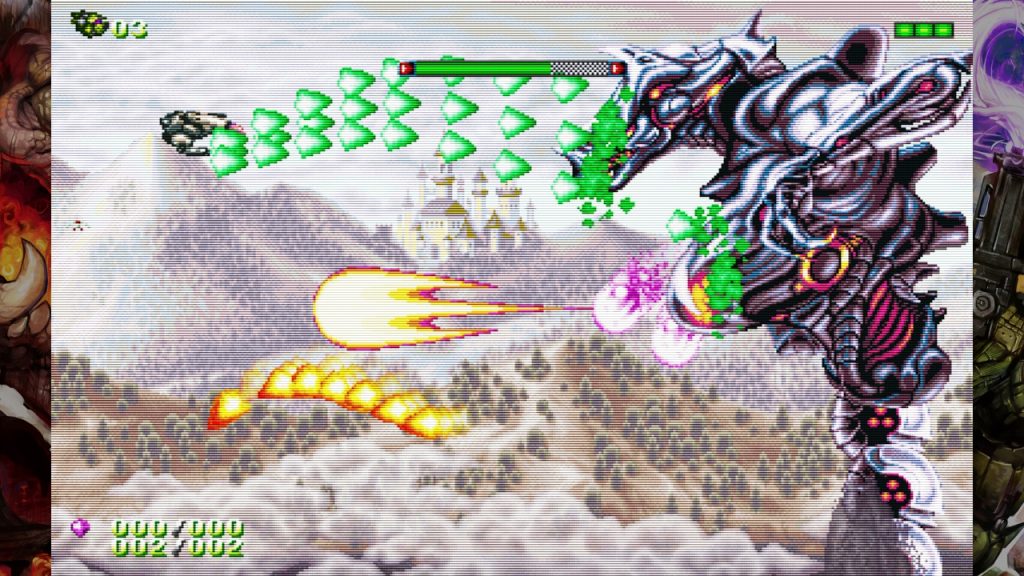 Gunlord X’s second stage is sure to please fans of Yumekobo and Irem’s catalog of space shooters.

The stages in Gunlord X are massive and a joy to explore with their branching paths and myriad secrets. Some can take a half hour or more to complete for the first time. And you’ll want to dig deep into each one to uncover large gems which award you extra continues.

The game’s second stage is a real treat. In it, Gunlord pilots a heavily-armed space ship in an incredibly satisfying horizontal shooter stage that feels like a giant nod to Yumekobo’s Neo Geo classic Blazing Star. The scene is teeming with enemy ships, giant mechs, and a boss that would look right at home in R-Type. It’s super well designed and doesn’t feel tacked on at all. Then again, this is no surprise given the developer’s history creating some solid shoot ’em ups, including the 2006 Neo Geo and Dreamcast shooter Last Hope. 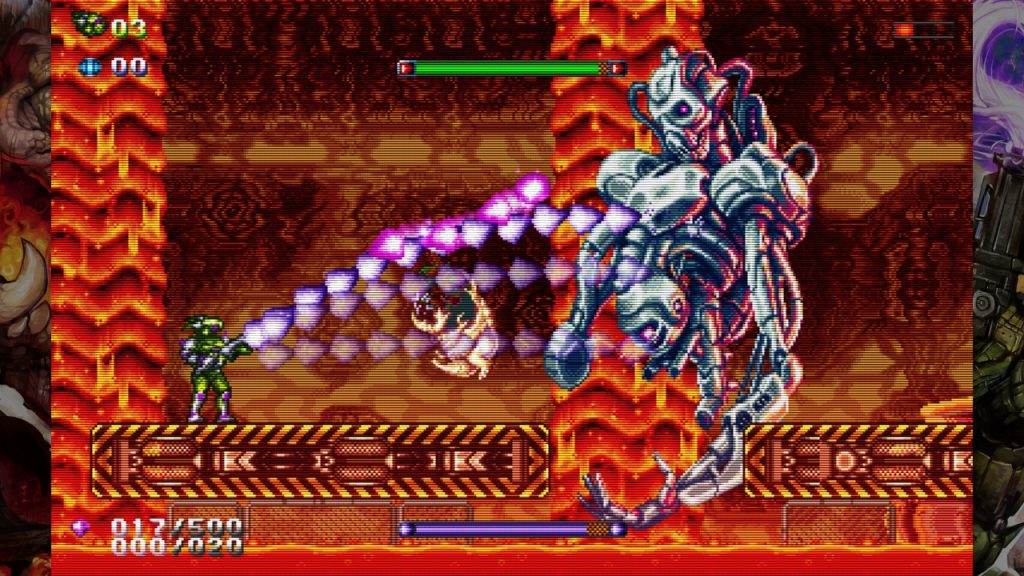 When Gunlord first released on the Neo Geo, it was certainly a good looking game. Likewise, seven years later, Gunlord X certainly shines on the Switch. The game’s sprites are exceptionally detailed, and there’s tons of variety packed into the more than 60 enemy types. This “Hi-Bit” overhaul introduces a welcome widescreen facelift over the title’s initial 4:3 aspect ratio which makes the game shine on modern TVs. Add to this a constant 60 FPS experience, and you have a game that looks and plays exceptionally well on Nintendo’s console during both docked and handheld play.

Performance aside, the game is just all around gorgeous. I love the way pieces of debris fly from the enemies you blast to bits – an effect that looks especially impressive when you blast a half dozen enemies at once with your Beam Laser. Each level also showcases plenty of parallax scrolling which adds layers upon layers of depth to the beautiful hand-drawn environments.

As good as Gunlord X looks, it sounds even better. The soundtrack is crafted by German composer Rafael Dyll of Ghost Blade HD and Söldner-X: Himmelsstürmer fame, who also handled the music for NG:DEV’s own Last Hope: Pink Bullets.

Dyll’s arrangments for Gunlord X range from beautifully haunting melodies to pumping, synth-laden war hymns. Each composition fits the action on screen flawlessly and does a fantastic job of pulling you into the game’s alien landscapes. Seriously, the soundtrack is so good that you’ll be humming it long after you power down your console. It’s just that good.

If there’s one complaint I have about Gunlord X, it’s that it’s over too soon. While the first playthrough may take you a few days as you master the game’s boss patterns and figure out the best way to navigate each stage, experienced players will be able to make their way through the game in a bit over an hour. Still, this is no surprise given the game’s arcade roots, so it’s hard to fault it for that. And with how subliminally satisfying it is while it lasts, it’s easy to forgive the game’s relative brevity. You’re surely getting your $10 worth here.

All told, Gunlord X is an outstanding update to one of the retro gaming community’s best-kept secrets. If you happened to miss out on the game when it first released or have trouble justifying dropping the cash on the Neo Geo or Dreamcast versions, then there’s no better time than the present to experience this modern day masterpiece. Gunlord X is nothing short of 16-bit perfection. If you have even a passing interest in retro run-‘n-gun titles, you owe it to yourself to add it to your Switch library.

Now if you’ll excuse me, I’m off to fire up my Commodore 64 and see what all of this Turrican fuss is about.

Full disclosure: A review code for Gunlord X was provided by the publisher. 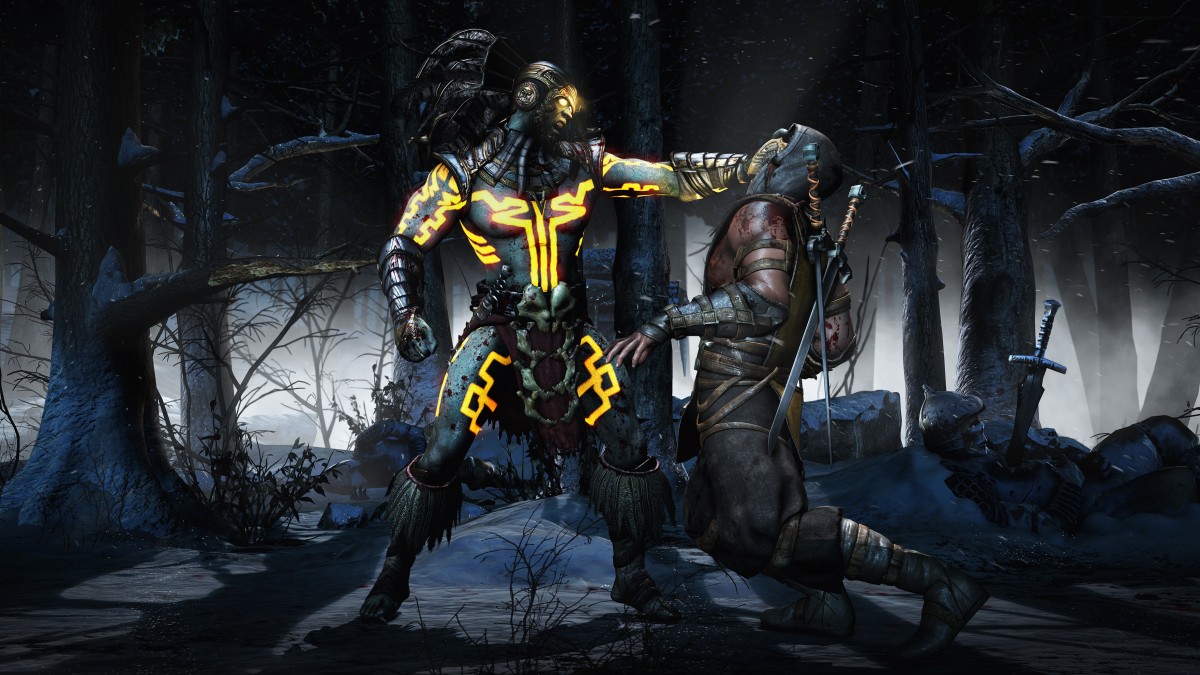 Mortal Kombat X delivers a near-flawless victory.  The Mortal Kombat series has been painting the fighting game landscape red for over two decades, often with mixed results. While the…