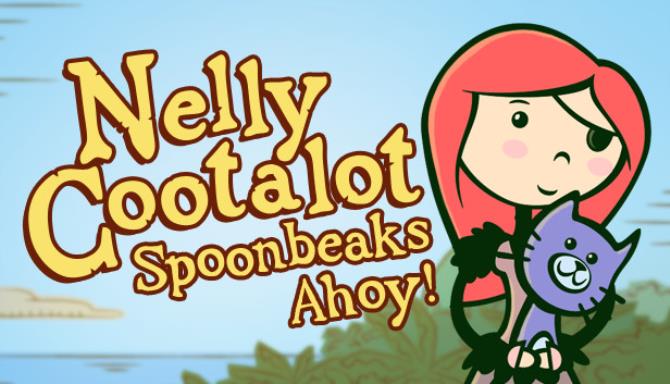 It’s hard to sum up Nelly Cootalot: Spoonbeaks Ahoy! I certainly remember playing it over ten years ago and considered replaying the old version before the HD remake. I decided against it, for better or worse, but could still declare that the remake of the game adds more to love. It’s also great to think of a new generation enjoying what the broke, angsty teens of my time spent many hours on.

Nelly Cootalot: Spoonbeaks Ahoy! Follows the adventures of, no surprises, pirate Nelly Cootalot. (Who is one of those cute, friendly pirates found in popular culture, rather than the murderous, assault-ty ones found in history books.) Nelly is summoned by the ghost of the great, late pirate Bloodbeard to rescue the spoonbeaks. The spoonbeaks are native to a small pirate-popular island, named the Barony of Meeth, provided over by the cruel and self-obsessed Baron Widebeard.

While it was great to replay this game, that I was a little obsessed with for about a week and a half during my teen years, it brought me to realize how long ago the noughties were! Not just because a 2007 game had to be remastered, but replaying the game, listening to some of the references and slang, such as Nelly saying “laters” or the references to music piracy seemed really dated. It felt bittersweet in the nicest possible sense of the word. 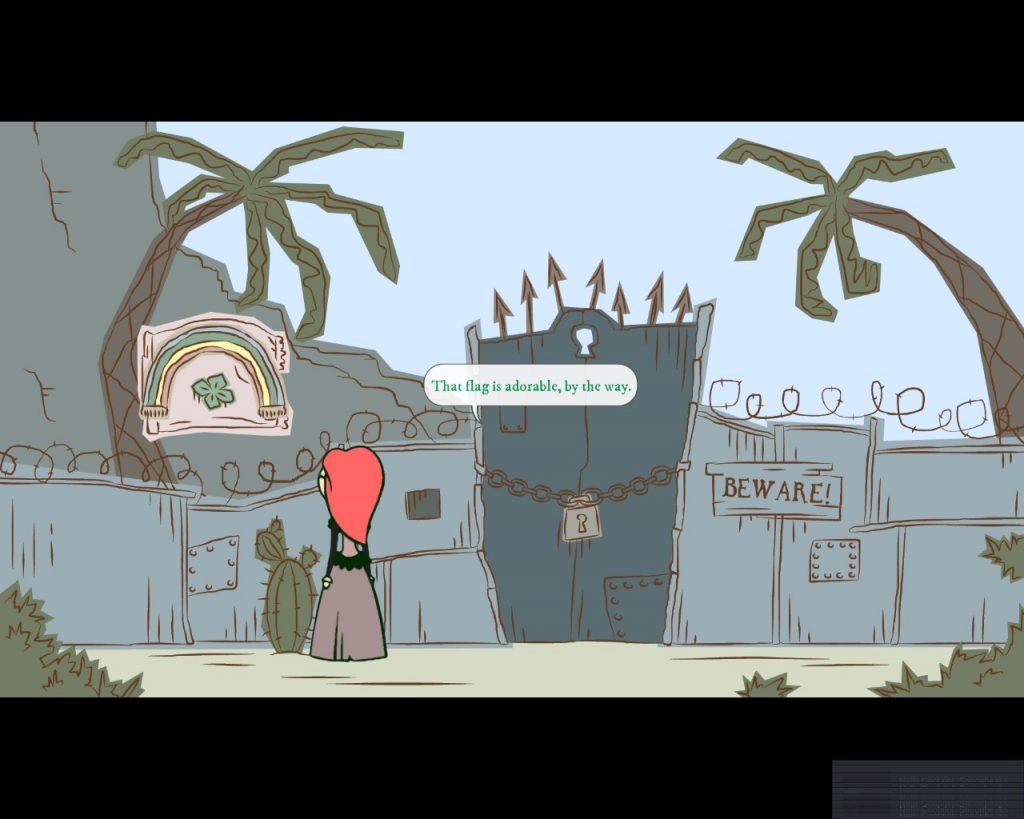 Unless I’m misremembering something awful, the story of the game doesn’t change at all from what it was back in 2007, which is great! Graphics improve, and computers need to be updated, but why fix what wasn’t broken.

The game does feel very much a product of its time. Not just because of the dated references, but it has this cutesy, noughties adventure game vibe to it. So much of Nelly’s personality is “random” and “cutesy.” Again, this is all meant as a compliment. Alasdair Beckett-King (creator of the game) has said that he made the game for his girlfriend’s birthday, and it shows that the character was made with love! She’s adorable, funny and her character felt even more like a ray of sunshine with the new voiceover.

In the game’s intro, Alasdair literally apologizes for the voiceover- which feels a little needy. The voiceover is fine! Okay, so it’s not the greatest voice acting the world has ever heard, but it’s fine. The leprechaun voices have this David Firth quality about them, which again made me feel nostalgic. And Nelly’s voice actor brought reality to everything she said (which makes sense as she was voiced by “the actual Nelly.) She says her cutesy things like “postie cards” and “kitty” exactly like you’d think she would.

The story is probably the best thing about the game. The island is full of interesting and diverse characters, some of which are a little stereotypical but hey, it’s a Pirate game. Throughout, it maintains its humorous, adorable vibes, which you really can’t fault. 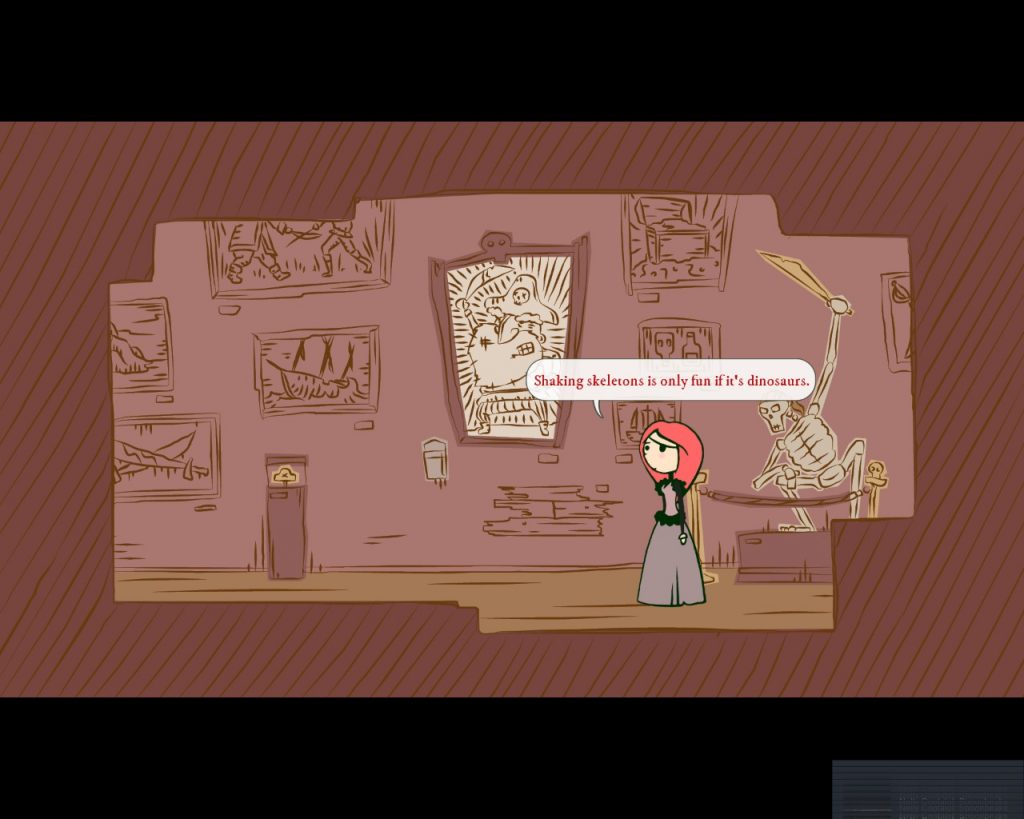 While the remastering does make the game run a lot more smoothly, I do have a few pedantic, whinging notes on it.

The point-and-click design works very well for the game. Most of the puzzles are solved by finding point A and using with point B, so being able to click, test, and select items makes exploration and puzzle-solving flow smoothly. However, it does sport that old dilemma of the character getting in the goddamn way! There were a few occasions where Nelly walked to the thing I wanted to click on rather than just letting me click on it and a few times where she got in the way. It would have been a lot easier to navigate if we had the point-and-click aspect to explore the shops and island, combined with “WASD” or arrow keys to control Nelly’s movements.

I also initially thought that you had to go inside the pub to access the map. It turns out the menu options were just the same color as the sky!

Overall, Nelly Cootalot: Spoonbeaks Ahoy! looks amazing. I thought it looked marvelous back in 2007. It’s colorful and exaggerated artwork suits the game’s style perfectly. The remastering doesn’t change that, only improves it for modern computers. Much like a remastering should. 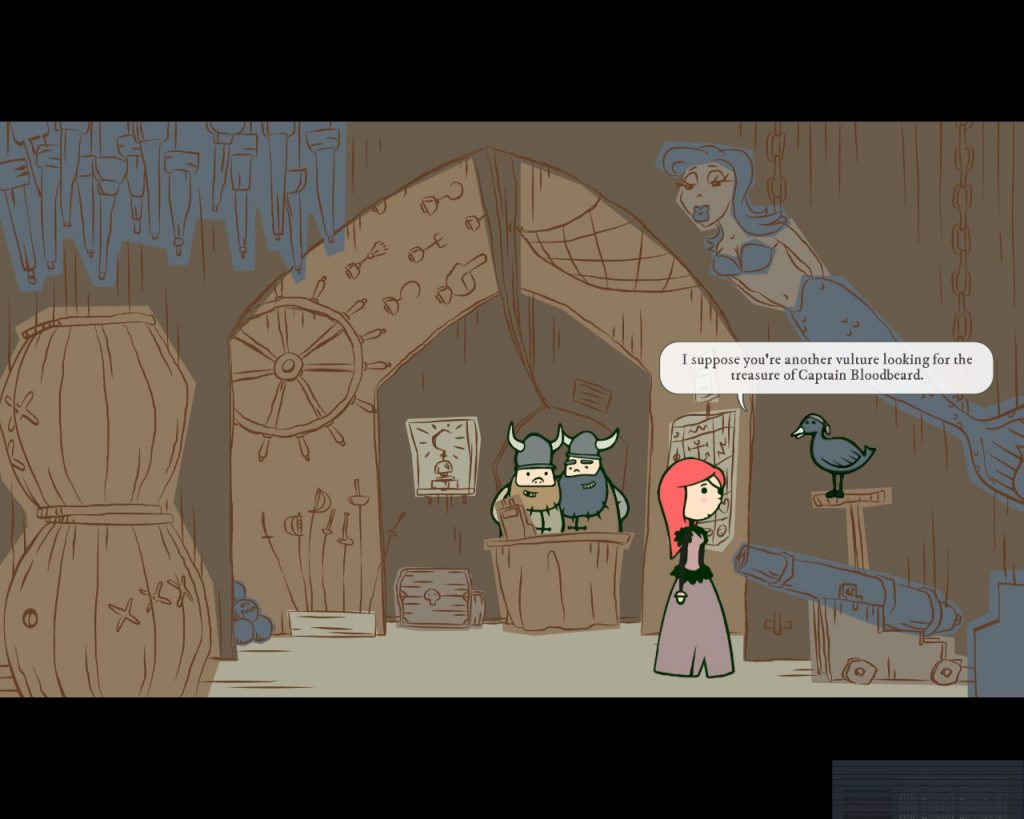 Perhaps this is just an example of twenty-five-year-old me being more sophisticated than thirteen-year-old me, but overall, the puzzles aren’t challenging. You have to retrace your steps a lot and go through a lot of dialogue, but all the information is there and, as per most adventure games of this nature, if you check everything you haven’t checked yet, you’ll most likely pass through the game no problem.

I did have a small mind glitch where I could remember bits of the game but missed out vital steps. For example, clicking on Bloodbeard’s bird over and over again knowing I had to talk to it, getting angry at the game- then remembering I hadn’t brought out the bird-book from the store! But that’s just a risk that comes when you decide to replay any game.

The final puzzle is a little time consuming, but it’s just trial and error. This would have been more enjoyable, however, if Nelly’s dialogue didn’t repeat on every “trial.” I’d listened to the conversation all the way through and enjoyed this feature but had to turn it off at this final hurdle!

Set Sail and Pack the Whimsy! 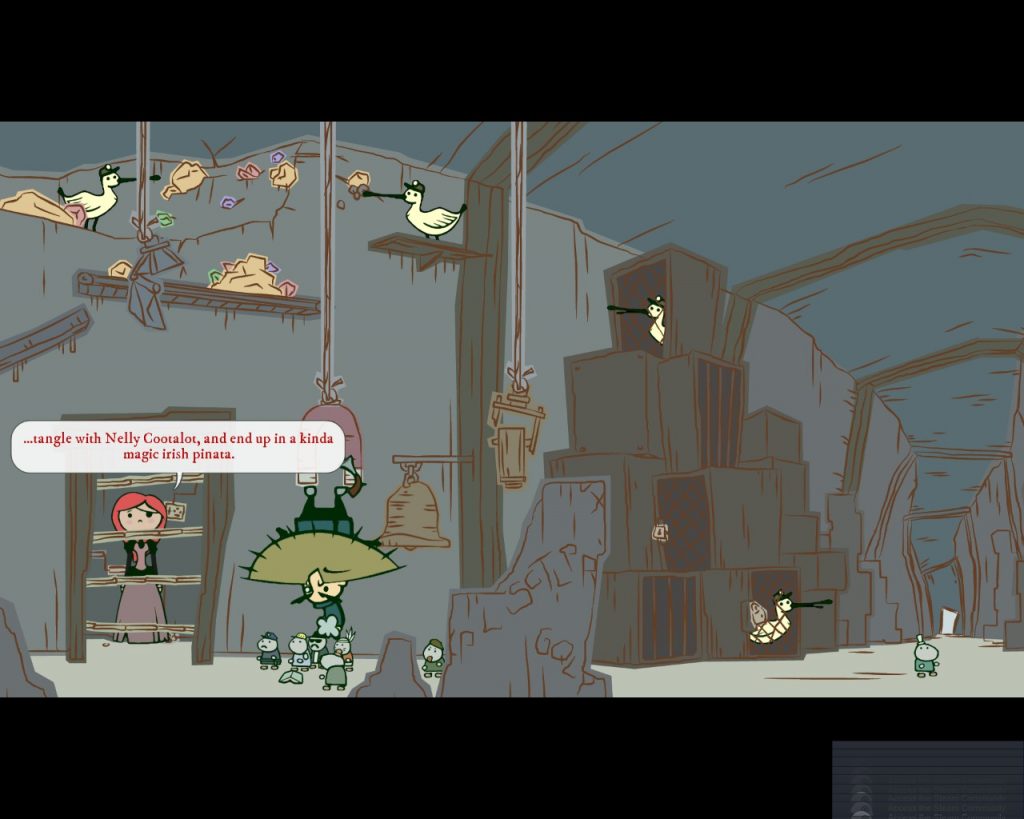 Nelly Cootalot: Spoonbeaks Ahoy! Is one of those games where you have no reason to be on the fence about it. If it interests you, there is no reason why you shouldn’t play it. It’s a short game yes, but it’s also inexpensive (and profits go to the RSPB, which protects the Spoonbeaks of our world.)

Nelly Cootalot: Spoonbeaks Ahoy! Was good in 2007, and it’s still good. The improvements in the remastering really show. The soundtrack is peaceful, Nelly’s voice actor is absolutely perfect, the other character voices are… fine. But it embraces everything it’s about- fun and adorableness, and this cute side to piracy we can all pretend is what the real thing about (because the reality was just a bit too grim.)

Full disclosure: This review is based on a retail copy of Nelly Cootalot: Spoonbeaks Ahoy! HD