An enchanting tale of ruins, rivalries, and romance! 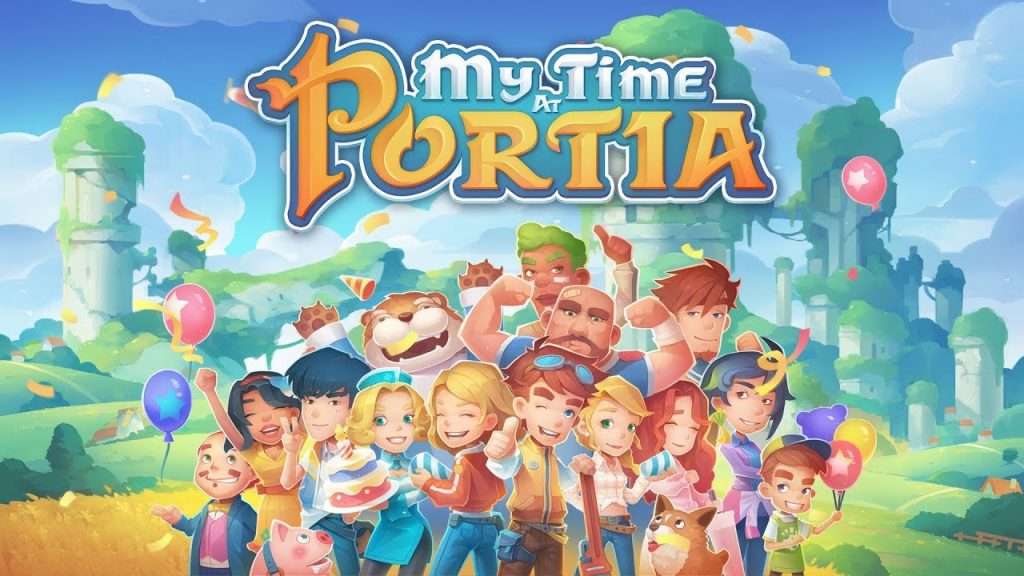 My Time at Portia, I truly love this game. I may be extremely biased, though, as I do have a soft spot for the Stardew Valley, Harvest Moon, Story of Seasons type games. I originally picked up the PC version on Steam when it was still in early access, and it consumed all of my free time. Once I learned it was finally coming to consoles, I was, of course, super excited! So, as I was slid this copy for the PS4 for this review, I prepared myself to put my life on hold, once again, and dive back into the wonderful town of Portia!

My Time at Portia is a farming/crafting/life-sim game set in a post-apocalyptic port town called, Portia.  You come to Portia as the inheritor of your estranged father’s workshop (sounds kinda familiar). Throughout your time here you will make friends, fall in love, rebuild the town, have some strange adventures, climb the ranks of the commerce guild, and most importantly beat out Higgins as the top workshop in Portia! Seriously – dude is way, WAY too full of himself. 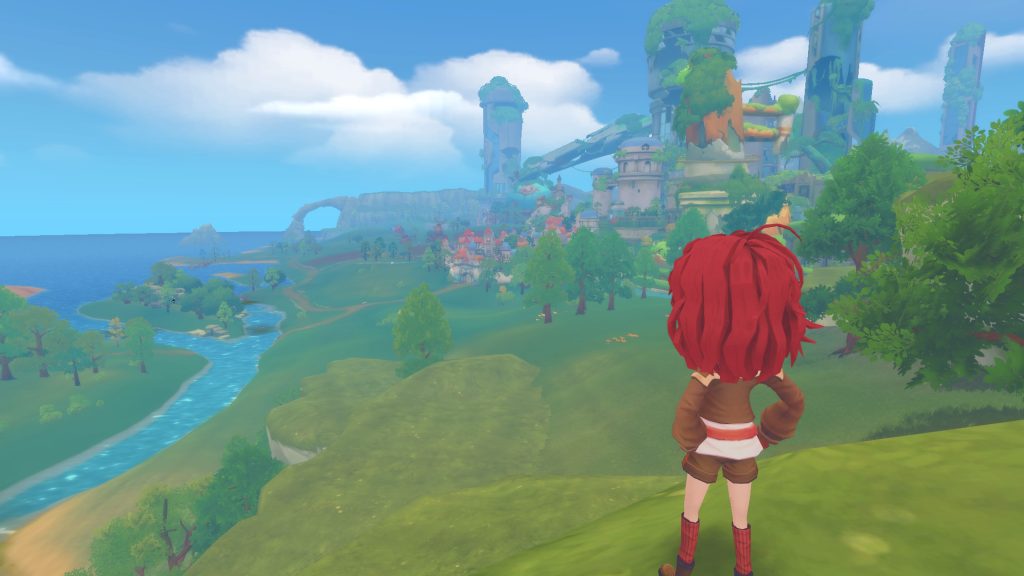 Everything the light touches is our kingdom.

Beginning your new builder life can be a little overwhelming. As with other games in this genre, there is so much to do and the days can go by super quickly. Commerce commissions, upgrading your tools, expanding your workshop, dungeon-crawling, mining, fishing, farming, figuring out the schedules of the NPCs, and the game doesn’t give you too much direction. That is also what is great about this game. You don’t really have to follow a linear set of things. The game allows you to complete the main story as quickly or as slowly as you like. The commerce commissions and the side quests are given to you by the NPCs are timed, however. You will want to make sure you note that when taking them as you can lose relationship points with the person who issued the commission or quest.

Being put in the same ring as Stardew Valley and Harvest Moon, you may think My Time At Portia is just another farm simulator with light relationship building. While the mechanics are very similar, Portia is a little different than those titles. Instead of the “Humble Farmer,” you will be one of the handfuls of builders in Portia. Farming is actually not a huge mechanic here. You can grow crops, but you really don’t need to have a continually revolving field all year. I mostly found I only needed a couple of planter boxes and planted what I needed for quests or items I needed to make. Most of your time will be spent collecting materials to craft items for the Commerce Commission, the town residents, and yourself. Cutting down trees, forageables on the ground, killing monsters, ruin diving, mining, all yield different materials you will need to craft quest items, weapons, and tools to outfit yourself, and machinery that you use around your workshop. 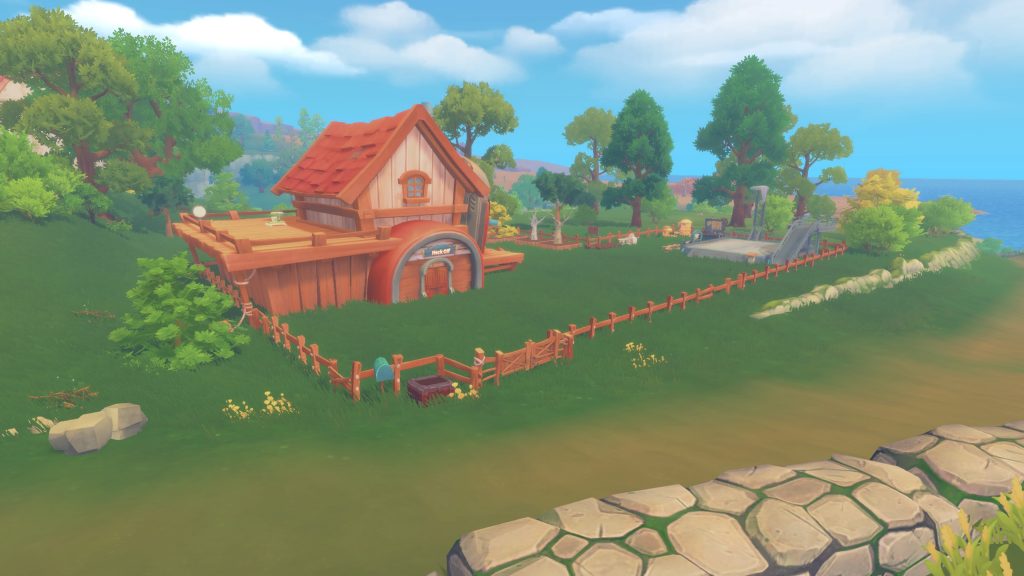 Won’t you be my neighbor?

The relationship mechanics in My Time At Portia are unique from other titles in this genre. You can still make friends the good, old-fashioned way by giving them a gift to raise their affection. Each NPC has their own Items that they love, like, are neutral about, dislike, or hate. Giving them a loved item yields the most points, and giving them one they dislike or hate will deduct points. Outside of this you also have options to play Rock Paper Scissors or even spar with some of them. Once you get to friend status, the game allows you to go on play dates. These are just like dates that you can set up once you are in a relationship with one of the NPCs. Some characters even stop by your farm to ask you on play dates. You have a few options as to what you can do on these outings; going to the beach to play in the sand, talking under the Wishing Tree, and swinging on the swings, just to name a few. As you climb the relationship ranks, you will also sometimes get special quests from the character you are pursuing. You don’t even have to take the time to become friends with every single character. Some characters are connected, like if they live or work together. So, as you gain affection points with one, you will also earn points for all the NPCs connected with that character.

Once you feel you are ready to get into a serious relationship, you will need a couple of special items, like in Stardew Valley, to start the relationship and get married. Giving these items can sometimes end up in rejection but, don’t worry! You can always raise the NPC a heart level and try again! Or just spam them with it every day. Whatever your preferred courting style. There are also items you can give your special someone if your relationship just isn’t going the way you had hoped. Surprisingly enough, most of these items can be bought right at the Portia town flower shop. 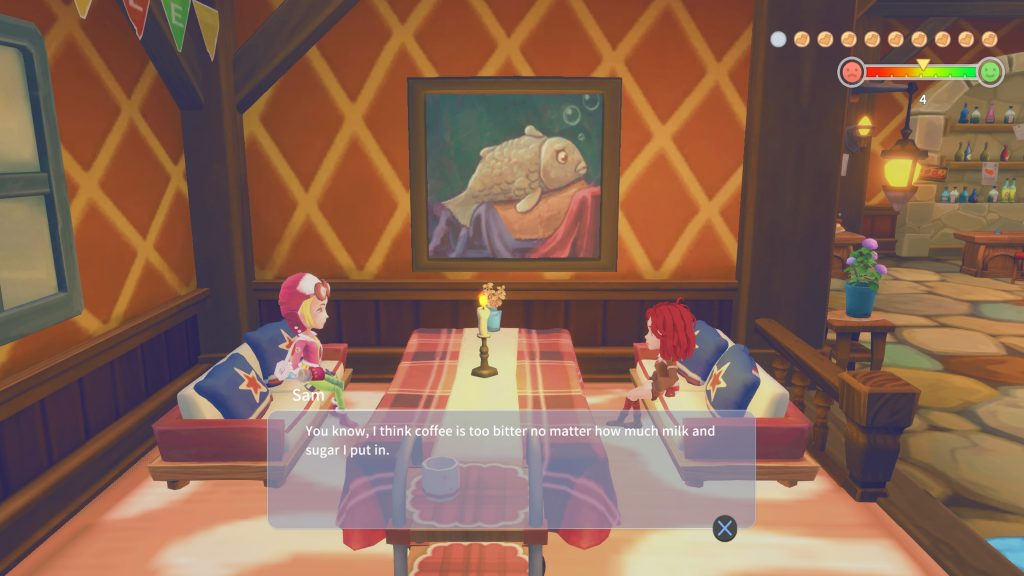 I don’t think this relationship is going to work out…

My Time At Portia is quite a pretty looking game. I am not saying it has super realistic, next-generation graphics, but it is still very pleasing to look at. The areas in this game are quite varied and detailed for how simple they are. The swaying grass and Colorful llamas of the field behind your workshop, the bustling town with its markets, the different dungeons with their own unique sets of enemies. Even the NPCs that live in the town are unique and vibrant, each with their own style and personality.  It really feels like the developers put a lot of love and care into this game.

As much as I have thoroughly enjoyed every minute I have played of this game, there are a few mechanics that I missed from the PC version not included in this release or, small glitches and hiccups I hope get patched in the near future. None of these issues I encountered were game breaking or gave me any trouble completing quests or the main story. They were actually more, funny or a minor annoyance. Such as, starting out my day and watching Pinky – Portia’s absolute unit of a cat – slide her way across the ground through the Portia town gate!

Purrs by the Pound 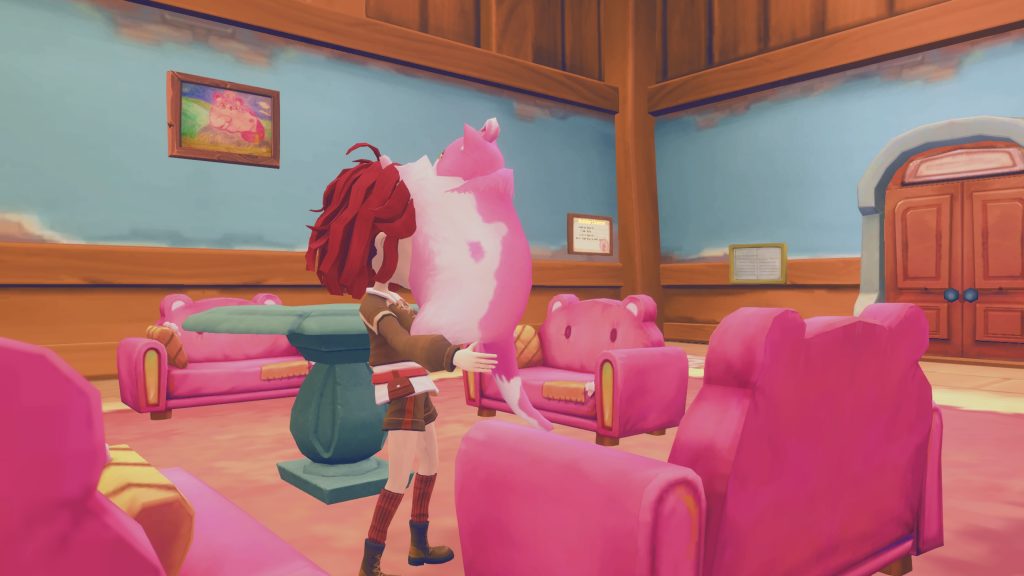 One thing, in particular, I frequently encountered in My Time At Portia was graphical issues. The draw distance on the PS4 is not what I had expected for a game that I don’t think even really pushes the PS4 Pro. It was quite common for me to run through an area and have enemies spawn right in front of me or, even on top of me. Also, there is a fair amount of pop-in. I would be walking through an area, wondering where all the forageable items were, only to turn around and have them pop into existence. There was one particular tree, by the town wall, that wouldn’t spawn. I encountered this almost every time I played. The game knew it was supposed to be there and, gave me the prompt to be able to kick resources out of it. The physical model for the tree was never populated in the game.

Some other things I noticed were the omission of options and mechanics that were in the PC release. On PC you had an option to turn the voices off but, they are entirely absent here. I honestly don’t know why the voices were cut from the PS4 version. I don’t know if this is the same for the Switch and Xbox One ports. It is kind of odd to go to pet Portia’s resident cat, Pinky and she doesn’t meow or, talking to the residents, and it is just text. Another mechanic that I found odd that it wasn’t in this particular version was, the ability to move around the mining site while you have your artifact scanner open. This doesn’t make it harder to find the artifacts but, it did make it faster to be able to run to an area where they were more concentrated and start digging there.

I really had a wonderful time playing My Time At Portia again. Even on the PS4, it is still, basically, the same relaxing, time sink of a game that I fell in love with on the PC. I do hope they patch the PS4 version to fix the graphical issues and possibly even put the voice back in. As much as I have stressed these as issues, it by no means made this version a chore to play. I am just spoiled because I played it on PC first. I do intend to play both iterations of this title through to completion. Yes, even with as many hours as I have sunk into both the PC and PS4 versions there is still more that I have yet to experience out of it! So, if you are a fan of these farming/crafting/life-sims and prefer to play on console, I definitely recommend picking this one up. Pick it up on PC too while you are at it.

Full disclosure: This review is based on a PS4 review copy of My Time at Portia given to HeyPoorPlayer by the publisher.

Maiden China.   Sometimes a game goes by without doing too much to impress you. While some games will pour themselves into your heart and soul, filling you with…