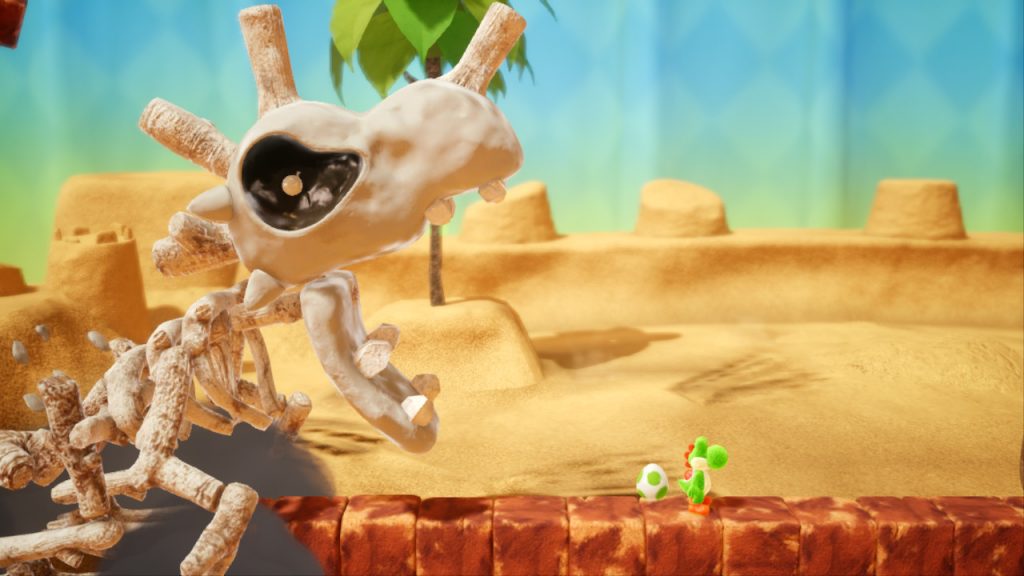 After trudging through the desert oasis, Yoshi finds himself on the run from the mighty Skelesaurus Wrecks. This fast-paced, auto-scrolling stage will have you running for your life, but make sure you pay attention you don’t want to miss your chance to nab the collectibles hidden throughout the stage. 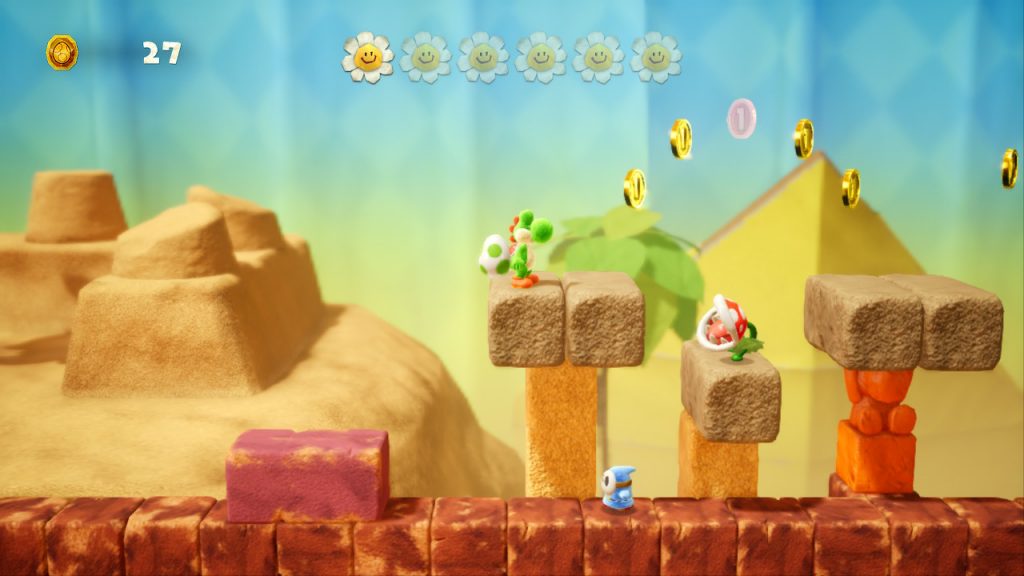 After you begin your mile of terror, look for a Question Mark Winged Cloud under three blocks. Hit it to reveal a set of coins. 3 red coins will be hidden among them (3/20). Next, you will see a piranha plant resting on the top of a sand block. There will be an arch of coins above it, 1 red coin will be in that group (4/20). For the next red coin pay attention to the background, there you will see a present hidden between 2 trees, go ahead and give it a shot (5/20).

Further ahead there will be a flying Shy Guy where your next 3 red coins will be waiting for you (8/20). You can find 3 red coins in the area where there are several hearts hanging on a balloon. There will also be 3 spring balls ahead, just use the middle one to jump straight up and collect your coins. Use your ground pound if you’re having trouble timing the jump (11/20). As you are making your way up the platforms don’t miss your chance to grab 1 red coin on the lower left platform (12/20). Drop down to another flying Shy Guy and hit the Question Mark Winged Cloud to make a cluster of coins appear on the platform. There’s 3 red coins in that group (15/20). 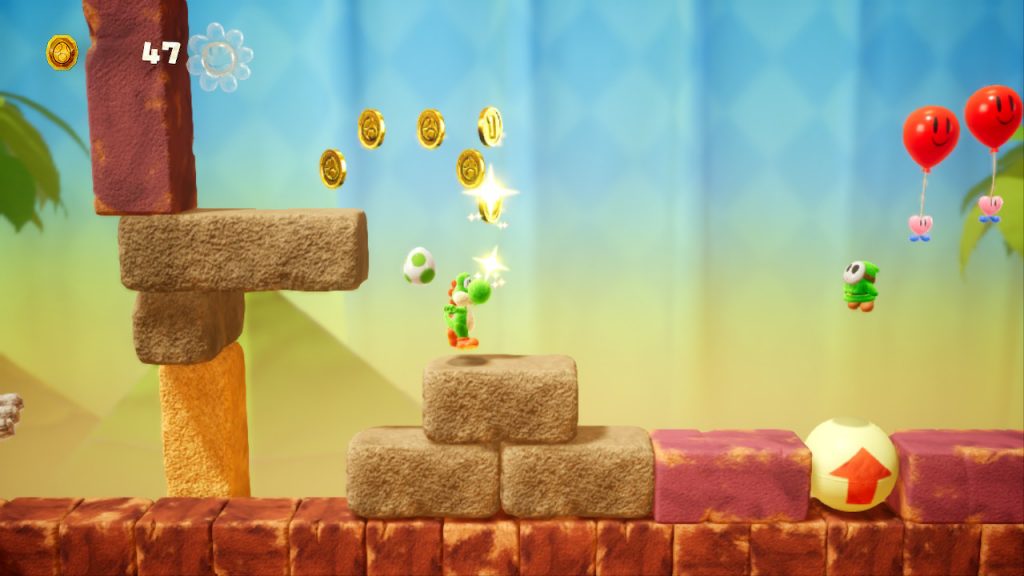 The first flower will be inside some solid blocks, wait for the Skelesaurus to destroy it with its head, then claim your prize. It will be to the far right after the start of the stage (1/6). You will see a cloud on the floor under a red platform, jump up the platforms to get to the right side. Hit the Question Mark Winged Cloud to it to reveal the second flower (2/6). Keep running to the right and follow the string of coins heading to the top left, by a wall. Your third flower will be waiting (3/6). The 4th flower will be surrounded by sand blocks. Use your ground pound to get it, then get the heck out of the way because Skelesaurus will destroy everything (4/6).

Past the 4th flower, there will be a clock cloud, hit it and four pink pipes will appear. Destroy them before the timer runs out for your fifth flower (5/6).  Once again he will begin to speed up its chase, you’ll go through a few bouncing balls and red coins. Once you get close to the end, there will be the final flower so jump from the platform to reach it and its all over (6/6). 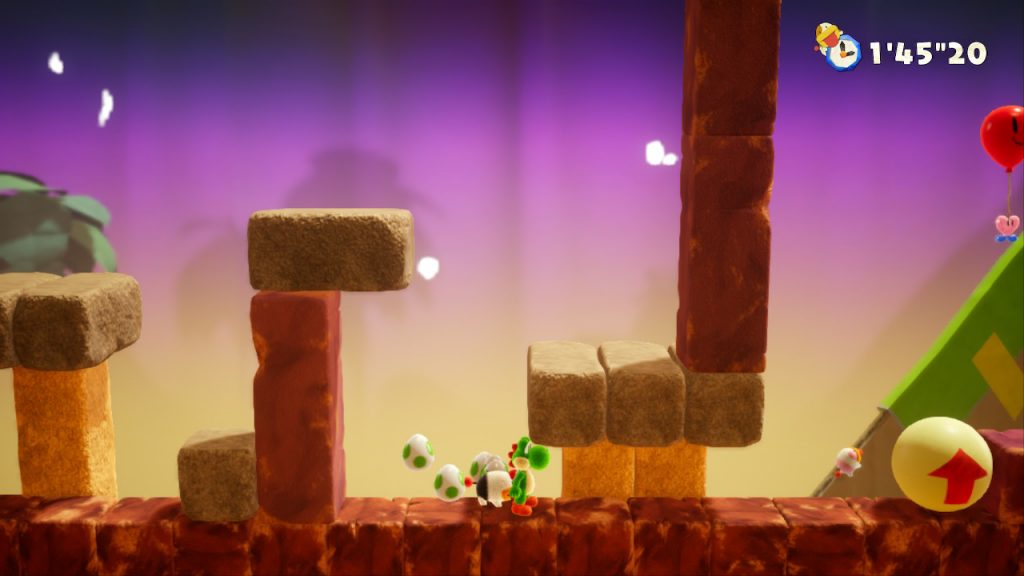 On the flip side of the stage, the first Poochy Pup will be near the starting area hanging on top of a pillar before a bouncing ball. Hit it before the Skelesaurus destroys it (1/3). Keep on running and eventually, you will find Poochy Pup number 2 towards the middle of the stage. Listen for a bark, you’ll find the second pup hanging on top of a tree in the background (2/3). Our final puppy pal will be in a mountain in the background. It will run towards the right, so try to hit it before the rampaging beast reaches you (3/3). 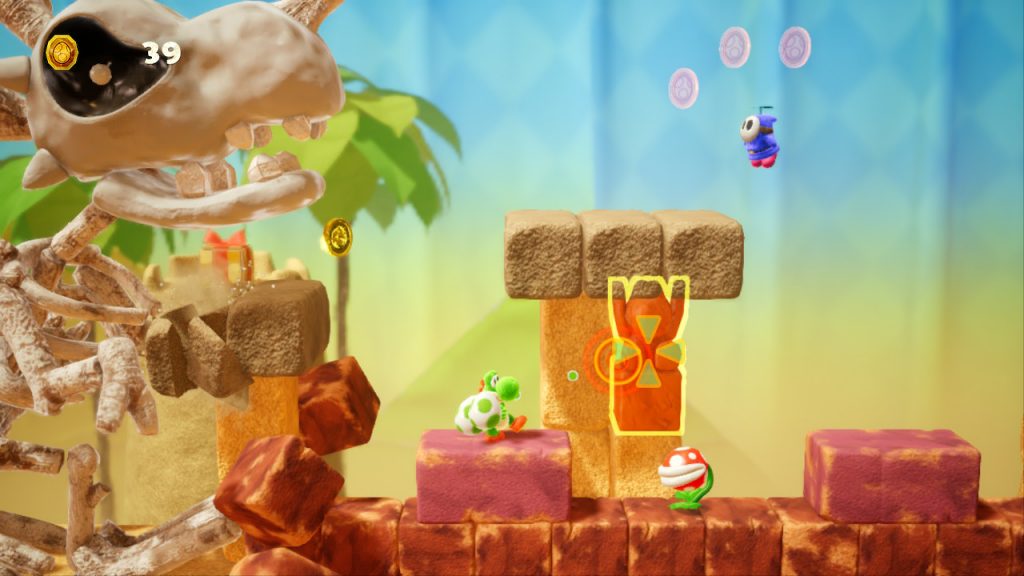 Yoshi statue 1: It can be found at the start of the level near the very first Piranha Plant. Your next statue is further ahead to the right of the gift box it will be found near another Piranha Plant. Where you found the fourth smiley flower, use your ground pound to destroy the blocks and reach the third statue.

Camels: The camels can be found hidden near sand castles throughout the stage. The first one will be behind a sand castle to the right. With about 2 minutes 13 seconds on the clock, you will find the next camel under a tree.  There will be another sand castle further in the stage, look to the left of the castle.

Cheerful Pyramid: The cheerful pyramid can be found near the very end of the stage. You’ve got to be fast but look to the left before the stage ends and your smiling pal will be right there for the taking.

Well, that about wraps up our guide for Skelesaurus Wrecks. Hopefully, this will help you guys on your adventures. If you’ve got any questions sound off via the comments section, and in the meantime check out our Yoshi’s Crafted World guide hub!