Deep Down In The Darkness Lies Salvation 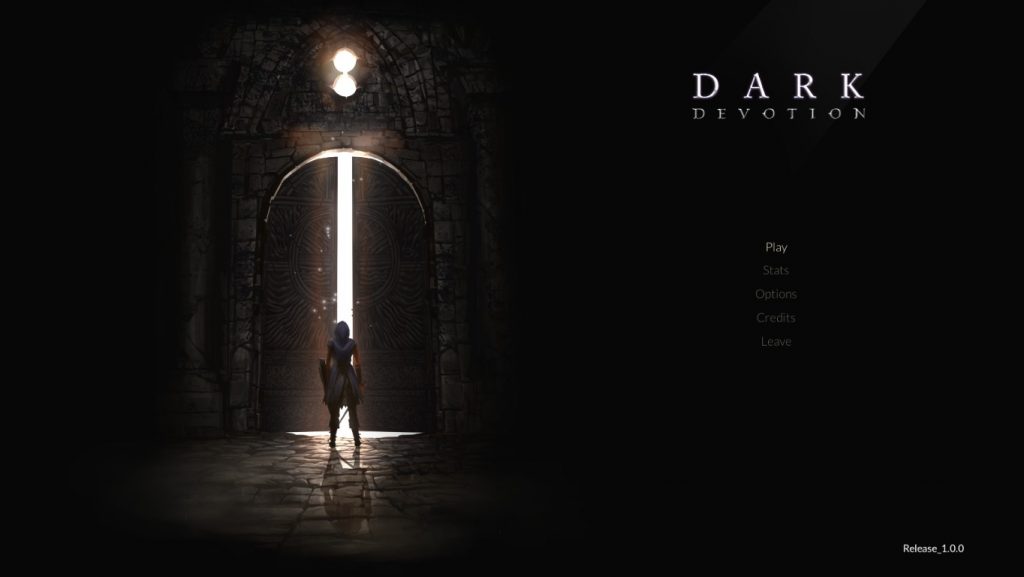 How far would you go to display your devotion for the God that you both love and worship? In the game, Dark Devotion, this question is asked of the main character. And while you may feel as though you are a bit inundated in a sea of Dark Souls and Dark Souls-inspired games, I have reason to believe that you may want to make room on your palette for one more round of rolling and slashing your way to victory.

Dark Devotion plays like a 2D action-adventure game where your Templar avatar delves into the inner recesses of a massive temple devoted to the faith of which she worships. Though, from the very beginning, it is evident that things aren’t all sunshine and rainbows in this mysterious environment. As indicated by the title itself, not only will you be battling with some rather shady and demonic entities but you’ll also be doing it in environments that could undoubtedly use the blessing of a few more candles.  Seriously, don’t be surprised to find yourself feeling claustrophobic in a 2D environment. Fortunately, collectible items give off a subtle glow so long as they have been exposed and, more often than not, NPCs are easy to spot so long as you are aware of your surroundings. On occasion, however, you may find yourself blindsided by foes that take advantage of those dark environments to utilize the element of surprise.

Oh, How Rare Be The Friendly Face 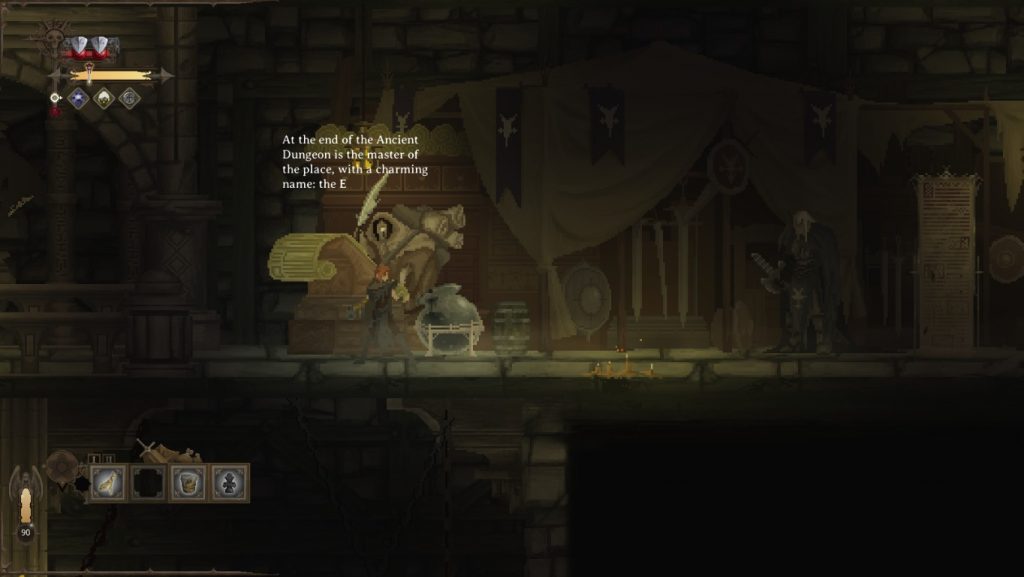 Exploration in the temple seems like it works similarly to typical 2D action-adventure games on the surface but there are certainly a number of differences worth noting. First and foremost, the world consists of a huge multitude of rooms that are interconnected by doorways. However, once you have entered a door and moved to the next room, you absolutely cannot return to the previous room.  Fortunately, there are occasional shortcuts that get unlocked that can be accessed from the main hub area such as “most recently activated” teleporters. Secondly, you are unable to jump which means that falling from high ledges is another way to prevent you from returning from whence you came unless an elevator or ladder is available. This will certainly make you want to think twice before taking any particular leaps of faith.

Thirdly, strewn throughout the maps are various named statues. By using a special currency called “Faith,” you can activate a variety of different effects depending on the statue. Sometimes, it will open a secret doorway. Other times, it will heal you. It can even result in the summoning of a variety of random items. Faith can be earned by killing monsters but, yet still, you’ll need to be wise about when you use it because you can easily find yourself staring down a statue that you want to use without the resources to do so.

Lastly, bosses function differently in this game than in others as well. Big bad monsters are dispersed throughout the temple and will truly test your mettle in order to put them down. However, unless you equip a specific item when departing the hub after death, those bosses will all respawn requiring you to dispense of them once more if you happen to pass through their space.

The player character gets access to 2 equipment loadouts – each bearing slots for two hands for the use of weapons, spellbooks and shields, an armor slot, and an idol slot (which I’ll explain below), and four item slots. As enemies are felled and chests are opened, new equipment can be located and equipped on the fly.  In addition to fighting with your equipped weaponry, dodge rolling is available for use in evading both traps and opponents.  Make sure to balance your stamina gauge to make use of attacks and dodges well because when you die, you will find yourself back at the hub area sans everything that you died with. Though this can seem rather punishing, Dark Devotion does have a feature that doesn’t make this as harsh as one might expect. In the hub area, there lies a Blacksmith NPC that you can visit in order to deck yourself out with gear for the next trek into the temple. Initially, his options for use are rather bare but, as you explore the temple, you’ll occasionally find equipment that, upon being collected, will become permanently unlocked at the Blacksmith’s forge. 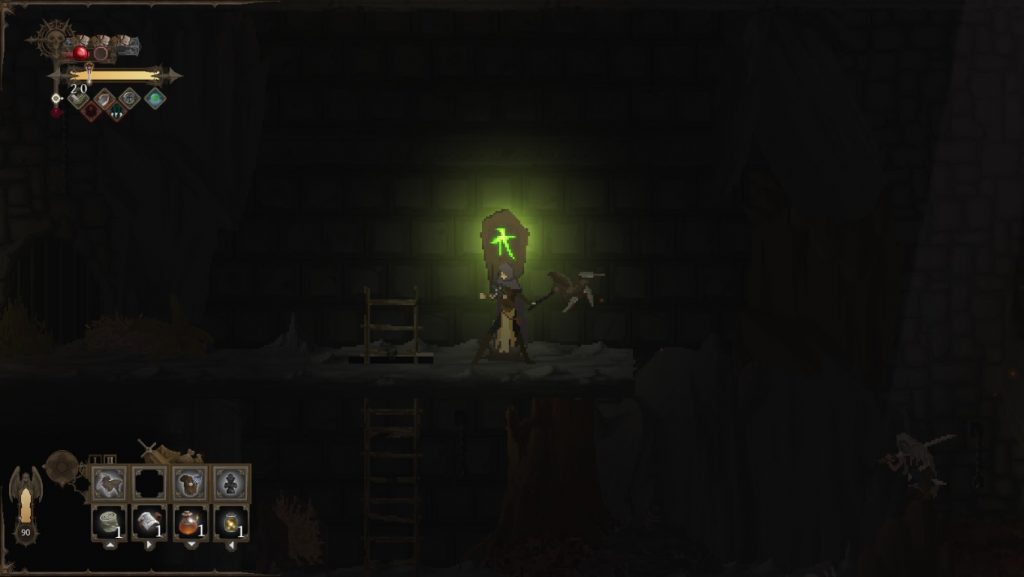 Unlike with most other games in this genre, your character’s health is not determined by your stats but, rather, by your equipment.  Initially, you are equipped with rags and a monastery idol which provide you with two armor points and two hit points, respectively. Each time that damage is received, armor points take precedence on receiving damage – followed by your hit points.  Separate items are used in order to heal each respective gauge with armor being the easier of the two to replenish. Also, if either new armor or a new idol is located and equipped, then your armor and hit points will be updated to reflect the new gear. There was a moment where I was wearing a 3HP idol with full health and stumbled across an excellent idol replacement. It had a 5HP maximum, and it allowed me to be reborn one time after death. However, it also only had one HP out of those five available upon equip, so I had to decide on if the risk was worth the reward.

Character stats also function differently from your average game of this genre because experience points do not exist in this game, and the character does not level-up. Instead, you are required to locate several arcane tablet stones hidden throughout each area of the game. Upon discovering and activating each one, you’ll unlock a permanent upgrade to one of your stats such as total attack power, total faith, or maximum stamina. I found myself enjoying this mechanic because it is one way to reduce a desire to grind in the game while also incentivizing exploration of the game’s myriad of routes that can be taken. 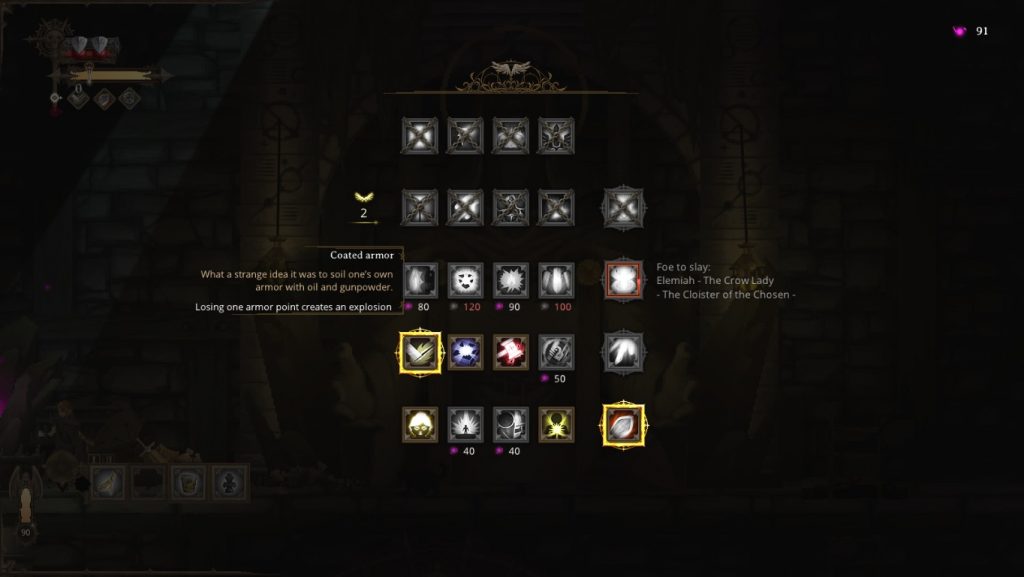 That isn’t to say that grinding isn’t completely done away with in this game due to the existence of soul points. Upon the defeat of certain foes, purple orbs will float towards and be collected by the player. Unlike with equipment discovered on each run, soul points actually stay with you upon death and can be amassed to large quantities.  Whenever you are back at the starting hub, these soul points can be exchanged for various benefits that can be bestowed upon the player. Said benefits are divided up into tiers that each have four traits available to be purchased and one that can be unlocked upon defeating a specific boss in the game. Subsequent tiers can be made available for perusal after unlocking a set number of abilities in the previous one. While I found the unlocking of each of these to be enjoyable, I did find one particular thing to be rather annoying regarding this mechanic. In each tier, only one of each trait may be in use at a time. However, there are a number of cases where there are clearly traits with benefits that far outweigh the others resulting in a large number of the available traits going unused in favor of their far superior competing options.

In an interesting twist, Dark Devotion also has a roster of negative statuses that “compliment” the positive benefits that you can have. Depending on how your play session transpires, you may find yourself, unfortunately, triggering one of these adverse effects. For example, if you take one too many heavy attacks, you may find yourself suffering from excessive blood loss, which will cause HP damage every 40 seconds. Another particularly annoying status that I experienced was “shortness of breath,” which resulted in my stamina gauge refilling slower than usual. Fortunately, some items can be used in order to absolve yourself of these plights, but they aren’t always at the ready when you need them.

Leave A Light On For Dark Devotion

My time with Dark Devotion has resulted in some rather mixed feelings towards the game. While I felt that the weapons roster could have used a few more of the speedy variety as well as more variety, I still found myself enjoying the discovery of new equipment and whatever perks it would bring. I very much lamented the fact that you can’t go back to previous rooms as you progress, but I eventually grew accustomed to the thought of just revisiting previous routes as needed after dying and being reborn. I really was against the idea of being unable to jump but came to accept that I get suitable evasion from utilizing dodge rolls. Even the excessively dark environments can be rather annoying, but that just comes with the territory as the game does its job of making you feel like you are in a poorly lit and sinister temple. Dark Devotion is not without its faults, but I’d be remiss to deny the effectiveness of its experience considering how much enjoyment I received from playing it despite those faults. If you are a fan of games like Dark Souls or Salt and Sanctuary but feel like you’d something that does things a tad bit differently while also not being AS punishing as those then look no further than Dark Devotion.

Full disclosure: The publisher provided a review code for this title.