Heart of the Woods Review (PC) 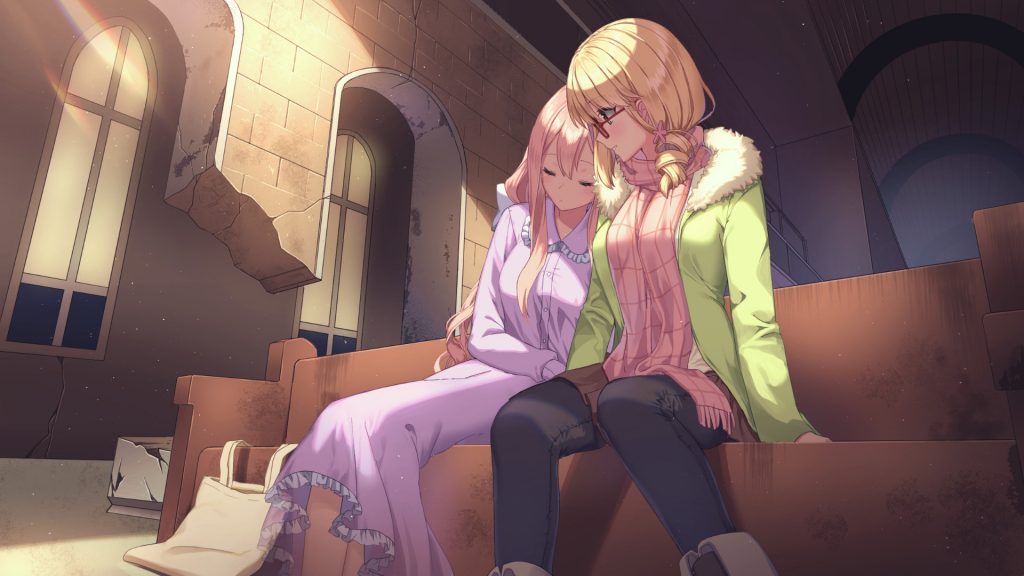 My experience with visual novels has certainly been interesting. Stemming entirely from my time as a video game reviewer, my first-ever VN experience plopped me straight into the mysterious and (at the time) very unfamiliar world of otome with Amnesia: Memories, soon whisking me away to the sci-fi genre with Steins;Gate, and eventually, to the gut-wrenching horrors of Corpse Party. I’ll be the first to admit that my introduction into VNs certainly hasn’t been “organic”, but that doesn’t mean that I haven’t enjoyed every single moment of it. I genuinely look forward to each new visual novel that I get to review, as well as the possibility of being introduced to a new genre. And, as luck would have it, yuri VN Heart of the Woods checks off both of those boxes.

There is a lot going on in Heart of the Woods — much more than I had anticipated there to be. However, while being overly busy can often times hamper a game’s overall design, this game somehow managed to make it all work. Not only does it do well with its own romantic elements — which are, of course, absolutely vital to a yuri VN — but it manages to tie each of its intimate relationships together with an overarching story featuring magic, mystery, and an anything-but-romantic antagonist in a way that feels natural. I’ve never played anything quite like Heart of the Woods Before — but I’m certainly glad that I have, now. 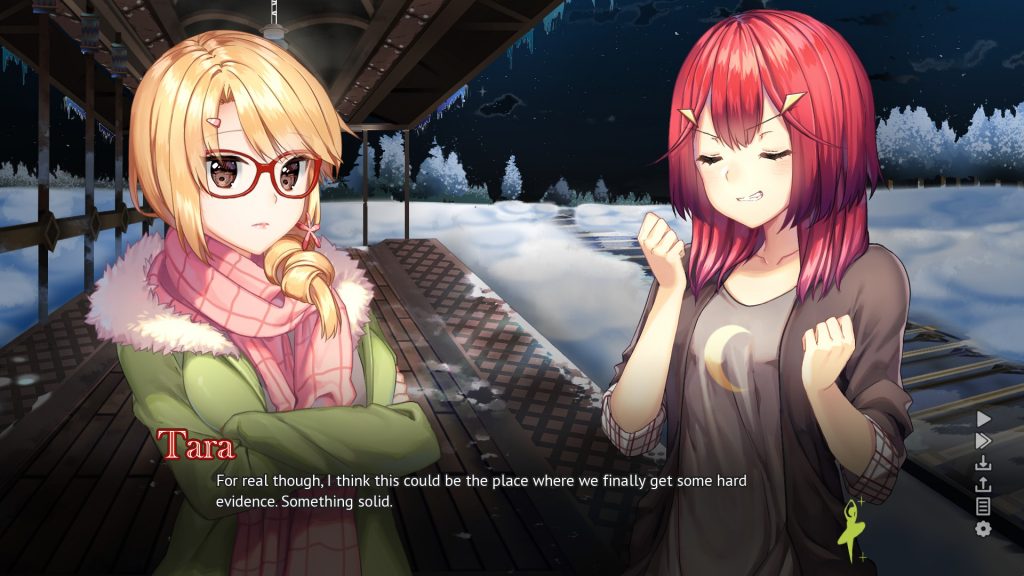 Evidence or not, your fans will still love it!

Heart of the Woods begins in the same way that all storybook romance stories do: with two girls, Maddie and Tara, traveling to a remote town in the middle of a foreign country in order to shoot the latest episode of their paranormal-themed YouTube show, Taranormal. …Okay, maybe that’s not exactly “storybook” — but it’s still how this game starts! Unfortunately, even with such an exciting premise, these besties aren’t as excited as you would assume them to be. Despite the overwhelming success of their show, this episode will actually be their last one together — an outcome born from Maddie’s decision to quit her job as Tara’s techie (and glorified caretaker) and return to college. “Almost done” and “done” aren’t quite the same thing, however, and, regardless of the sad farewell in their near future, the two have decided to make this final episode one to remember — and oh how they will remember everything that happens in the quaint little town of Eysenfield.

As important as romantic relationships are within romance-themed visual novels, it can’t just solely contain hours of non-stop, lovey-dovey dialogue. There needs to be something that holds it all together — a certain narrative “x-factor” if you will. And Heart of the Woods? Well, it’s got that x-factor. From the very get-go, Heart of the Woods really tries to let its readers know that it’s attempting to build up to something. Something that’s going to be as morbid as it will be magical. And, while you might not know what that “something” is in the beginning (I certainly didn’t!), it’s obvious that the effort to create a genuine, fully fleshed-out story is there. 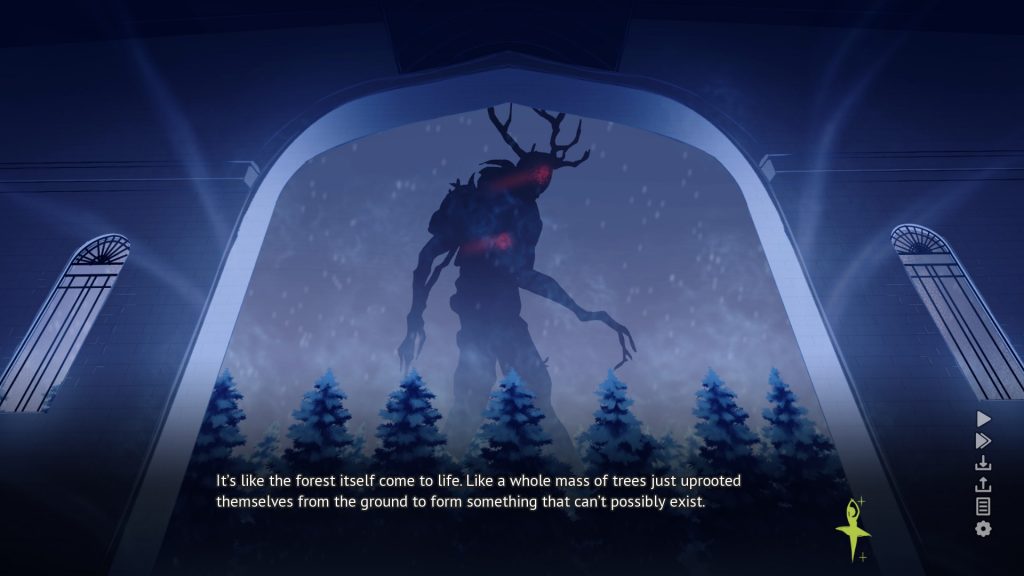 No, no one falls in love with the giant tree monster. Sorry!

I’ve already said that Heart of the Woods has a lot going on within its story, and the same holds true even without taking its core element into consideration. After all, Maddie and Tara only went to Eysenfield to investigate supposed paranormal happenings — it would be kind of weird if there weren’t other things going on within the game (unless the devs were really into red herrings). Fortunately, there’s nothing to worry about in that regard. While I won’t go into too much detail, lest I spoil the good parts, Heart of the Woods gives just as much attention to its magical, mysterious, and sometimes downright terrifying ghost-hunting story as it does its traditional romantic elements — all while making sure that everything blends together in perfect harmony.

The Love that Would Transcend Time 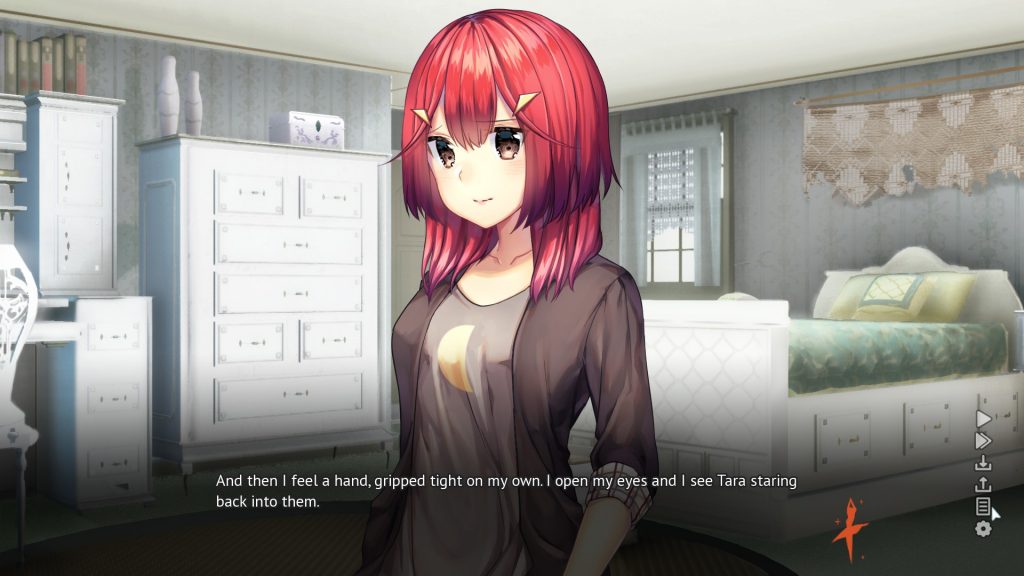 True love can be a truly powerful thing.

Heart of the Woods, as I’m sure you’re aware at this point, doesn’t seek to make romance the driving force behind its own story. Honestly, I would say that the narrative has more of a “tragedy and triumph” vibe about it. But the “triumph” part that I just mentioned? That‘s where the romance comes in. Rather than shoehorning it into a front-and-center position, Heart of the Woods‘ narrative instead chooses to use love, true love, as something that, once obtained, can allow the characters to push themselves beyond what they thought was possible (although the game takes that in a more literal way than reality would allow). To show that, despite the abundance of literal magic within this game, love has the possibility to become the greatest source from which one may draw power.

One of the main ways in which Heart of the Woods gets this point through is with its use of dual protagonists. Or rather, dual relationships. Despite what you might think, Maddie and Tara don’t end up together (although the promotional artwork kind of gives that away). Rather, they each find their own soulmate during their trip. Tara’s plus one, Morgan, is introduced very early in the story, as she’s the one who called the Taranormal duo out to Eyesenfield in the first place. Abigail, Maddie’s sweetheart-to-be, isn’t introduced until slightly later on in the story. That might have to do with the fact that she’s a ghost, though. 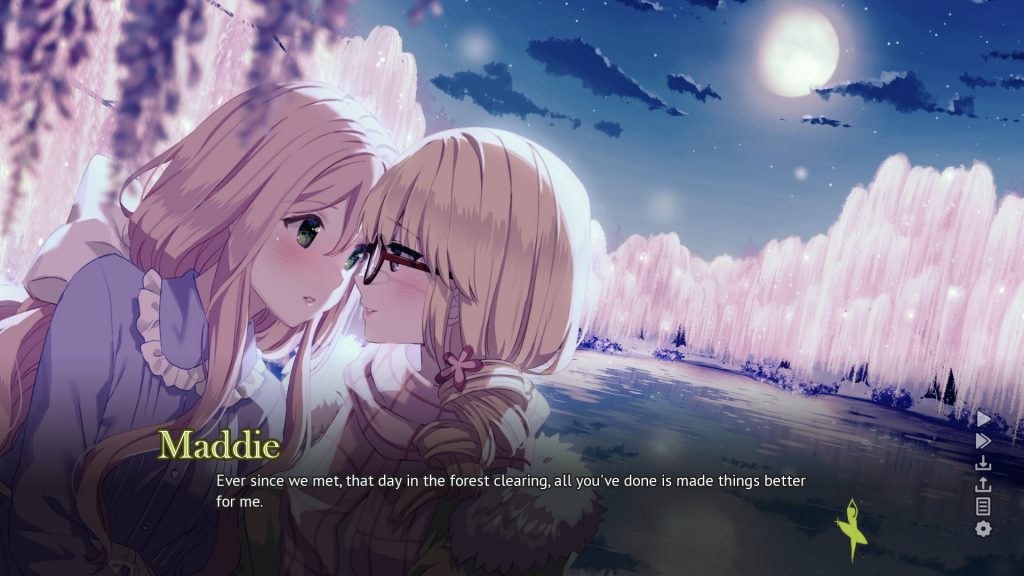 Maddie and Tara’s relationship work in different ways, but both are equally endearing.

Heart of the Woods‘ decision to divvy up the spotlight between two different couples ends up being beneficial in a few different ways. First, it allows Maddie and Tara to each diversify the roles that they play within the game’s story. Rather than immediately tying the two together with a relationship (or the promise of one), Maddie and Tara’s different relationships allow each character more freedom to develop their character in their own unique way, meaning that the player gets to see a wider variety of places in Eysenfield and its surrounding areas (ie the forest), as well as a larger number of unique scenarios. Also, I don’t think Maddie and Tara would make a very good couple (and neither does the game.).

Having twice the relationships also means that Heart of the Woods gets to play around with relationship dynamics more. And that’s great because this game really does its best to establish them as being very different from one another. On one hand, you’ve got Maddie and Abigail. Ethereal goings on aside, these two seem to work together because of just how alike they are. The quiet thoughtfulness that makes up a large component of their personalities helps them to resonate with one another quite well. And the differences that do seem to be apparent, such as Maddie’s naturally skeptical nature and dependence on rationality, are present enough to help them each feel like their own person, while never overshadowing their natural harmony with one another. 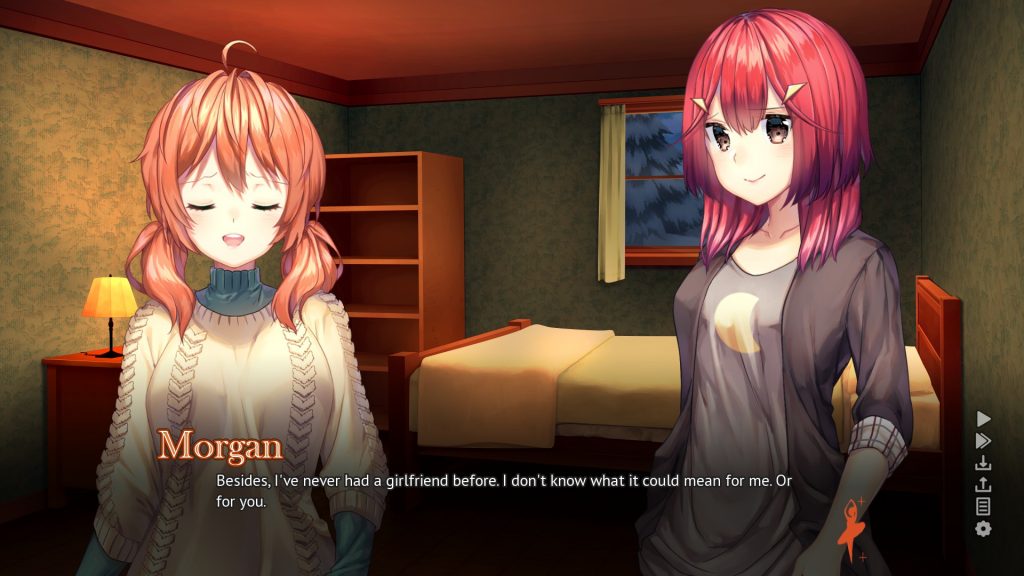 On the other hand, there’s duo number two; Tara and Morgan. Entangled in a relationship that’s less traditional to mainstream VN tropes, the only thing that these two ladies seem to have in common in the beginning is an uncanny ability to emotionally deflect when faced with something uncomfortable. Despite all of their initial differences, however, they do eventually make it work — and that’s the true beauty of their relationship. Both Tara and Morgan have struggled plenty in the past and, although their problems may differ, they learn that having hardships doesn’t mean that you have to be alone. That it’s okay to not be okay, and that healing your heart is always a little easier when you have someone you love helping you along the way. With Tara and Morgan being so different from Maddie and Abigail, there was, to be blunt, plenty of room to mess up. However, while Heart of the Woods does plenty of different things, messing up isn’t one of them. I don’t know how they managed to get away with throwing not one, but two quality relationships into the mix, but the fact that they pulled it off is downright impressive.

It’s hard not to like this game. Featuring a skillfully crafted narrative blend that emphasizes excitement and triumphs just as much as it does love and intimacy, Heart of the Woods is a game that has a lot of, well, heart. While may be the first yuri VN that I’ve ever played, I have a feeling that it will always remain among one of the best — regardless of how many I play in the future. Good VNs are a dime a dozen these days, but its gems like Heart of the Woods that really help to showcase just how wonderful the visual novel genre can be.

Full disclosure: This review is based on a copy of Heart of the Woods given to Hey Poor Player by the publisher. 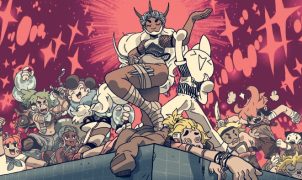 Tick’s Tales Points (and Clicks) Toward the Past     Point-and-click adventures drum up memories of a bygone age. Though they haven’t really stopped, their popularity has lessened and…