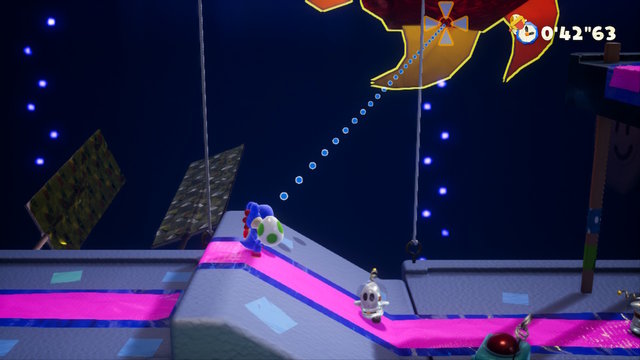 Space-Hub Hubbub may be the last of Yoshi’s interstellar adventures, but don’t let up! With all those giant meteors attacking the space station, those Red Coins, Smiley Flowers, Poochy Pups and Souvenirs could very well be lost to space forever. Thankfully, we’ve whipped up a guide to help you grab ’em all before then. 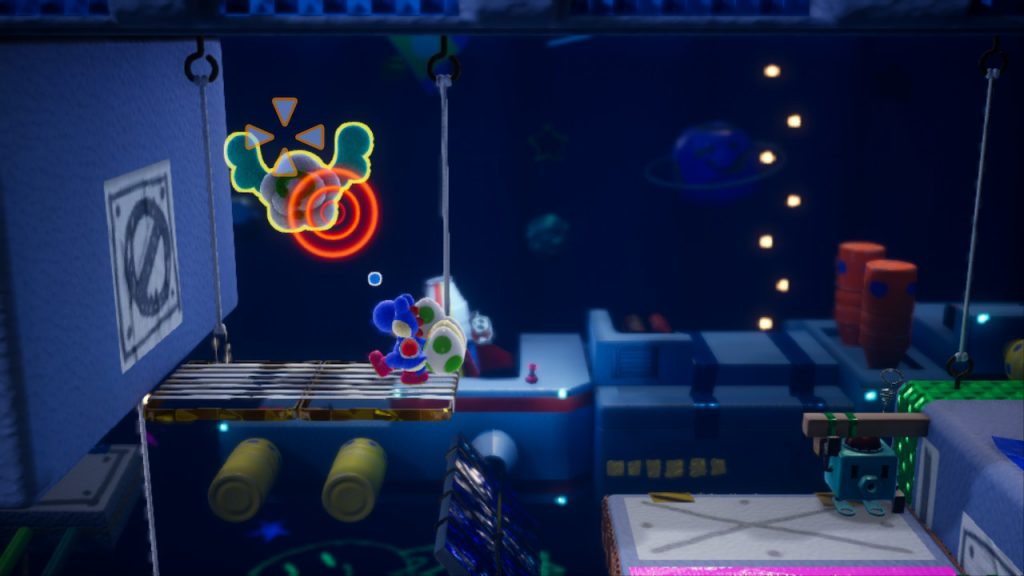 Those robot servants may get wacky whenever meteors strike the space station, but they’re good-natured at heart. Say your thanks when they raise the first elevator for you, for Flutter Jumping to the leftward platform hosts a cloud containing three Red Coins, as seen above. (3/20) The next two coins are on the platform adjacent to the upcoming slot block. (5/20) When you come across a floating cloud just before the second checkpoint, hop around the platform above it to unveil a hidden cloud; pop it for four more coins. (9/20)

Smack the gold present at the checkpoint for another coin (10/20), then collect these airborne coins past the rotating platforms. (14/20) A hidden cloud’s found in the vertical spinning-platform room here, host to three red coins. (17/20) The three final coins are found on (or under) the final spinning platform just before the goal. (20/20) 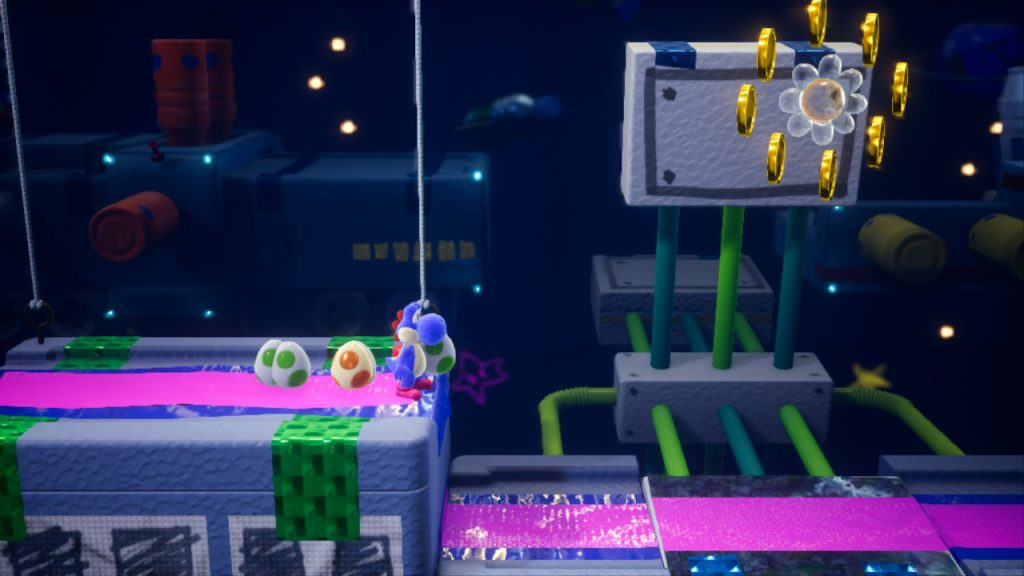 Space-Hub Hubbub is loaded with revolving platforms of all sorts, but the one seen above slowly shifts from background to foreground. When you reach it soon after starting the level, pop the cloud hiding within for the first Smiley Flower. (1/6) Now, you see the Smiley Flower viewed from the glass window here? Simply exit the room you’re in, head north and then left into that room to nab it. (2/6) You’ll eventually come across a floating cloud; pop it to reveal a coin cluster surrounding the third flower. (3/6)

Once you’ve reached the second checkpoint, ride the robot-operated platform into the background to find a Blue Clock Cloud. Collect all the Blue Coins in time for another flower. (4/6) The fifth flower’s in a hidden cloud here just past the checkpoint. (5/6) The final flower’s up on a platform here in the vertical room with the spinning platforms, held captive by a cloud.  (6/6) 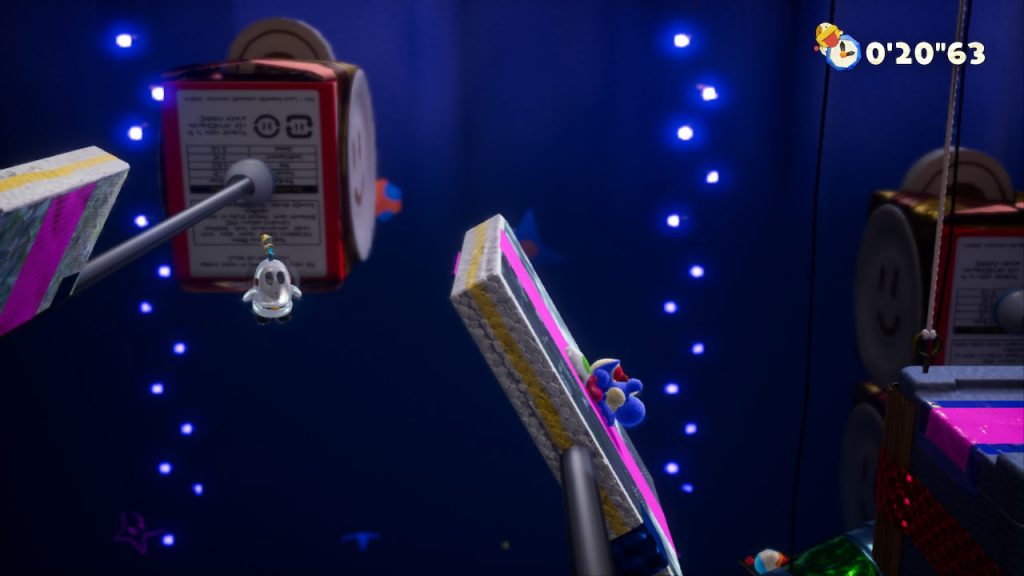 The Poochy Pups are running among upon Space-Hub Hubbub, and as always, it’s up to Yoshi to track them down! As seen above, the first one may give you some trouble — when you reach the final platform at the opening assembly, rather than following Yoshi’s ill-thought crouch above, aim carefully for the Poochy Pup on the background green ship. (Alternatively, you could just aim for it when you’re descending down the vertical room, but this method’s more satisfying.) 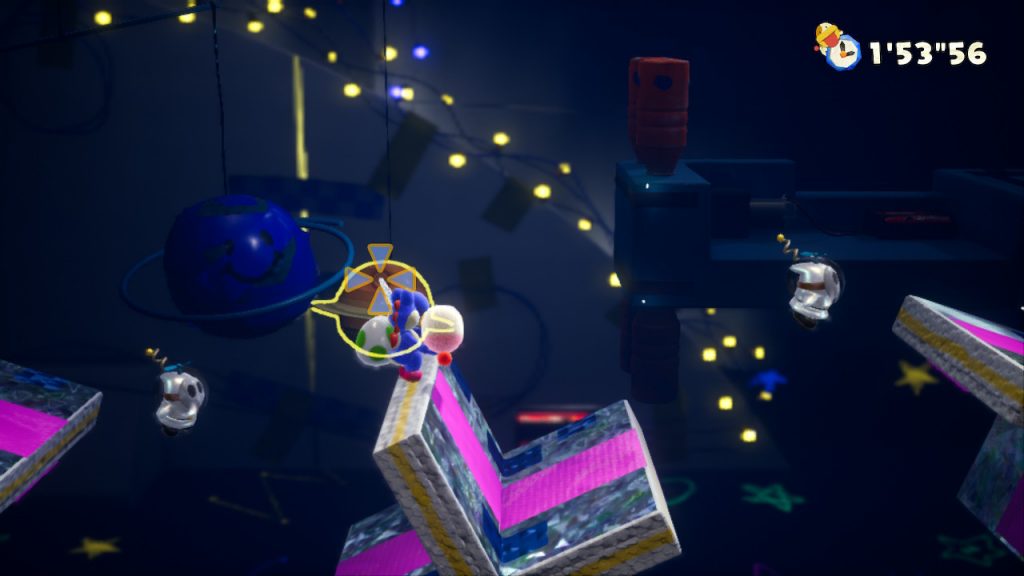 Saturn: After the third Poochy Pup, you’ll find The Ringed Planet behind, uh, another ringed planet just before the end of the Flipside.


Red Sun: This Flipside souvenir’s in plain sight just after you leave the vertical room. It’s so big that much of it’s obscured, but you don’t need to ascend the platforms for a better vantage point.


Shy Guy Cruiser: Five Shy Guys thought it was a good idea drive their cruisers around the space station…only to end up getting stuck. Time for a rescue! The first’s in the background at the very start of the level, the second’s behind the big revolving platform, the third embedded in this asteroid, the fourth flying about here after the second checkpoint, and the fifth hiding on the checkered box just before the final platforming sequence.

And that’s all for Space-Hub Hubbub! Give us a holler if you have any further questions, but in the meantime, check out our Yoshi’s Crafted World guide hub!