Who’s up for a galaxy-spanning road trip? 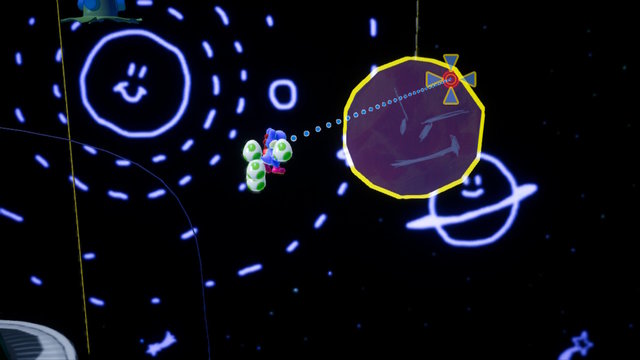 Ride the Star, indeed: shooting stars, UFOs, and rocket ships are but specks in the far-reaches of space, so you’ll need all the help you can get in tracking down those Red Coins, Smiley Flowers, Poochy Pups, and Souvenirs! Our galaxy roadmap below should be of use, so let’s get to it! 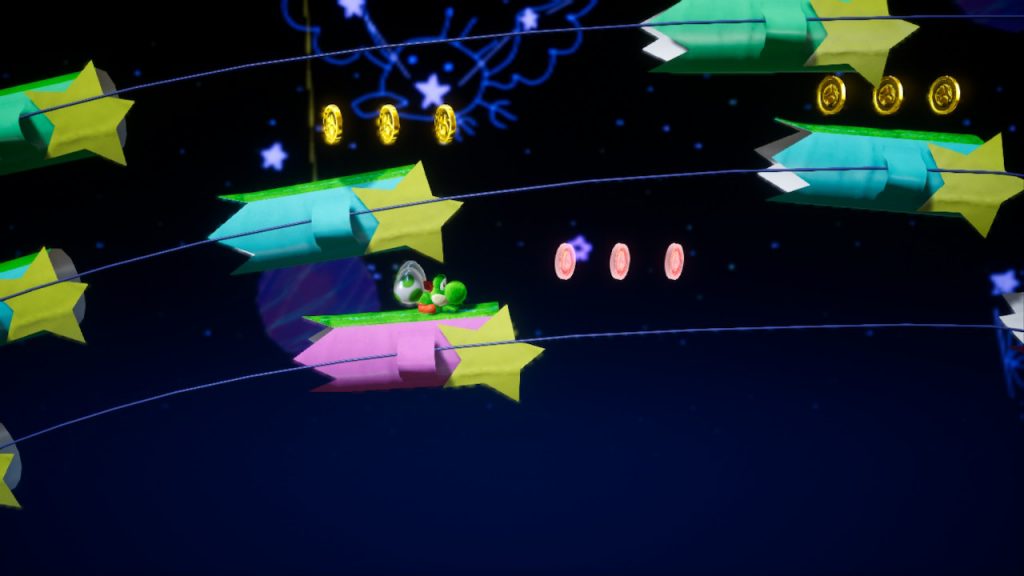 The first three coins are found in the cluster of shooting stars seen above; specifically, the three-tiered horde after the satellite near the beginning. You’ll have to drop down a bit to find them. (3/20) When you reach the ringed planet, pop the cloud above to lure down some UFOs; hop aboard to find three more coins. (6/20) The next coin’s inside the rocket attached to the upcoming mobile; to reach it, smack the rocket to spin it around and then hop in for the coin. (7/20) In the upcoming star storm after the checkpoint, ride up the stars here for three more red coins. (10/20)

Another coin awaits in the upcoming mobile, so simply smack the planet to your north to reach it. (8/20) Jump onto the nearby bottle rocket with the Egg Block above and aim for the Fly Guy here (9/20), then grab the four coins in the shooting star storm just past the second checkpoint. (13/20) A Gold Present rests upon a background bottle ship; aim carefully from the green star, then fire for another coin. (14/20) At the end of the next star storm, you’ll find the three last coins on a UFO. (20/20) 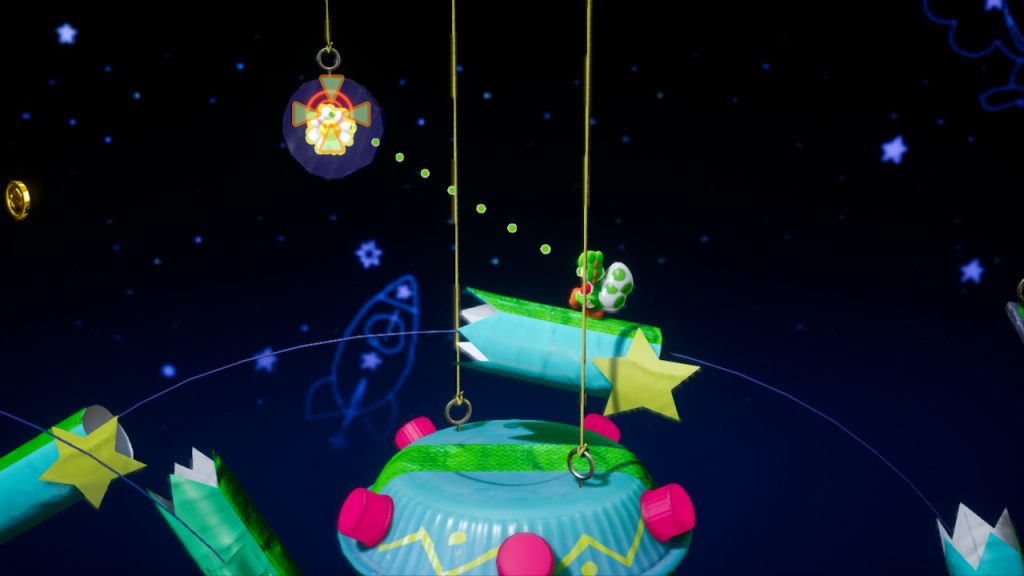 As seen above, this seven-flower space search will require some extra vigilance. To find our first example, travel to the shooting star arcs soon after the beginning and aim at the small planet suspended in the background — you’ll find a Smiley Flower hidden on the back. (1/7) Another Smiley Flower awaits you in the next storm of shooting stars towards the end. (2/7) When you pop the cloud on the ringed planet, grab the coins on the arriving UFOs to lure out a cardboard moon, which hosts a flower. (3/7) A Red Clock Cloud’s found after the checkpoint upon a trio of stars; pop it for a Fake Smiley Flower mini-game. The real one’s at the bottom among the three flower collections. (4/7)

Afterwards, you’ll spot the fifth flower within a rocket; hit the other planets attached to the mobile to gain access (5/7; to escape, hit the planet in front and then the rocket parts attached to the other mobile.) (6/7) In the midst of the upcoming star storm, ride up to the big ringed planet and grab the final flower there. (7/7) 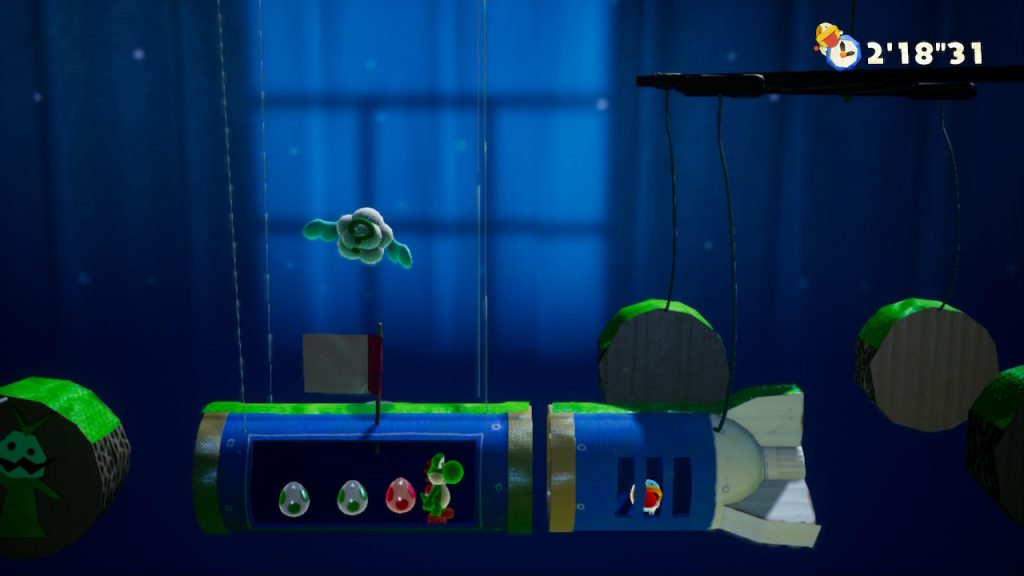 Just what you’d expect: those Poochy Pups are lost in space! At least we’re treated to a lovely curtain view, but regardless, you won’t find the first Poochy Pup until after the first checkpoint. Upon arriving at the second mobile, only smack the planet in front of you to line up the rocket parts together, then hop inside to rescue the puppy. As for the second pup, remember how you found the third Smiley Flower in a hidden moon? It’s hiding in the UFO just before that, so lure out the ships from the ringed brown planet and grab the Poochy Pup underneath with a tongue grab. The last doggo’s in the front of the green bottle ship near the end. 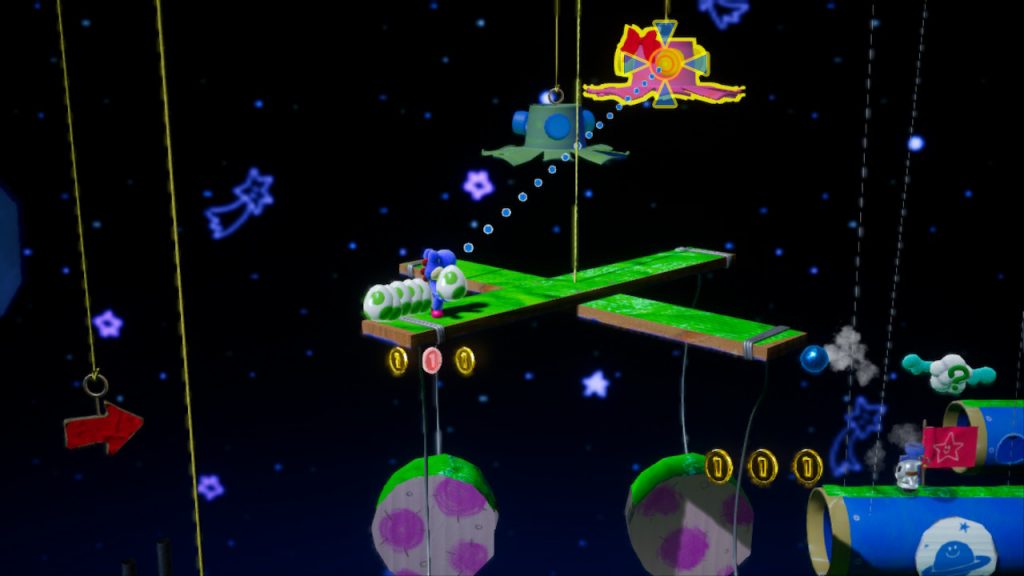 Stylish UFO: This pink UFO requires some clever platforming. After the first checkpoint, hop aboard the Egg Block and then onto the wooden mobile rods — you’ll find the stylish UFO at the end.

Alien Friends: Six of these wacky aliens lurk among the Flipside stars. The first rests on a UFO behind the giant ringed planet, the second hiding in this planet, the third stuck to one of the mobile planets just after the first checkpoint, the fourth next to the second checkpoint, the fifth on a satellite behind the three-tiered star storm, and the sixth inside the bottle ship with the third Poochy Pup.

Spirited Star: Remember that giant ringed planet you traversed for the last Smiley Flower? This smirking star’s just to its right.

And that’s enough riding on stars! Let us know in the comments if you have any further questions, but in the meantime, check out our Yoshi’s Crafted World guide hub!