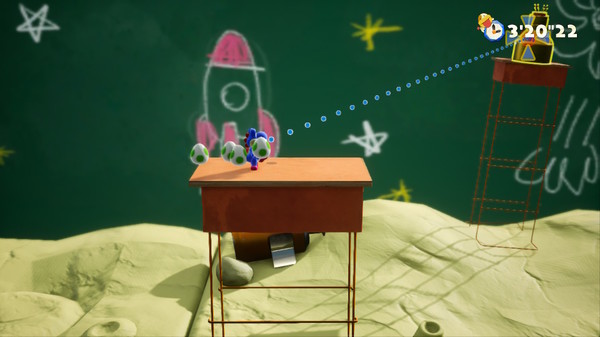 Pack your bags, Yoshi, for you’re heading to the final frontier: Space! The Countdown Begins is Outer Orbit’s only earthly locale, and as seen above, you won’t be there for long! To navigate the launch-pad station and the moon for those Red Coins, Smiley Flowers, Poochy Pups and Souvenirs, you’ll need Hey Poor Player’s guide to find ’em all. 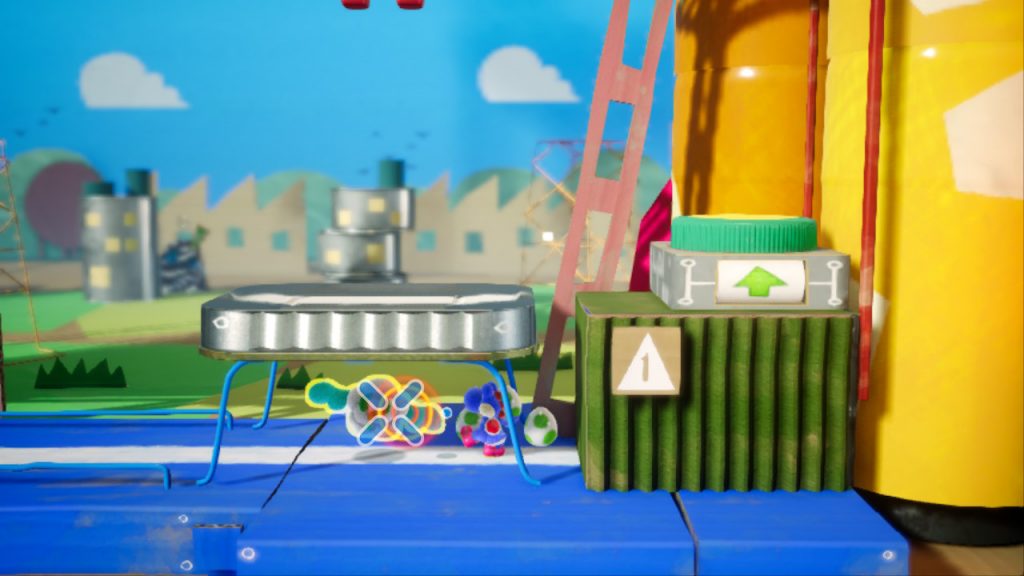 Once you’ve entered the station, run under the platform depicted above and pop the hidden cloud; hop above to earn the first two Red Coins. (2/20) Just before you hop across the electrical traps, pop the cloud to reveal suspended coin clusters containing four Red Coins. (6/20) The next four Red Coins are the most cleverly hidden of all — when you ride up the elevator, turn to the left and press the button lowering the magnet. Hop aboard the magnet and/or its accompanying lid to discover an airborne cloud; pop it to reveal the coins. (10/20) As you’re riding the big elevator afterwards, you’ll find two more coins within the coin clusters suspended throughout. (12/20)

Once you’re on the moon, head all the way right to find a present in the foreground; smack it for a coin. (13/20) When you’ve bounced up with the help of the octopus alien, tongue-grab the next one nearby and toss it by the Red Clock Cloud to use it as a footstool to reach the tower, which hosts three red coins. (16/20) The next three require some unexpected problem-solving — you see those coin-holding Shy Guys underneath these rubber bands? To drive them out, you’ll need to borrow an octopus and Ground Pound it to unleash its ink, causing the Shy Guys to flee. (19/20) The last coin is within a hidden cloud floating above the octopuses in the crater. (20/20) 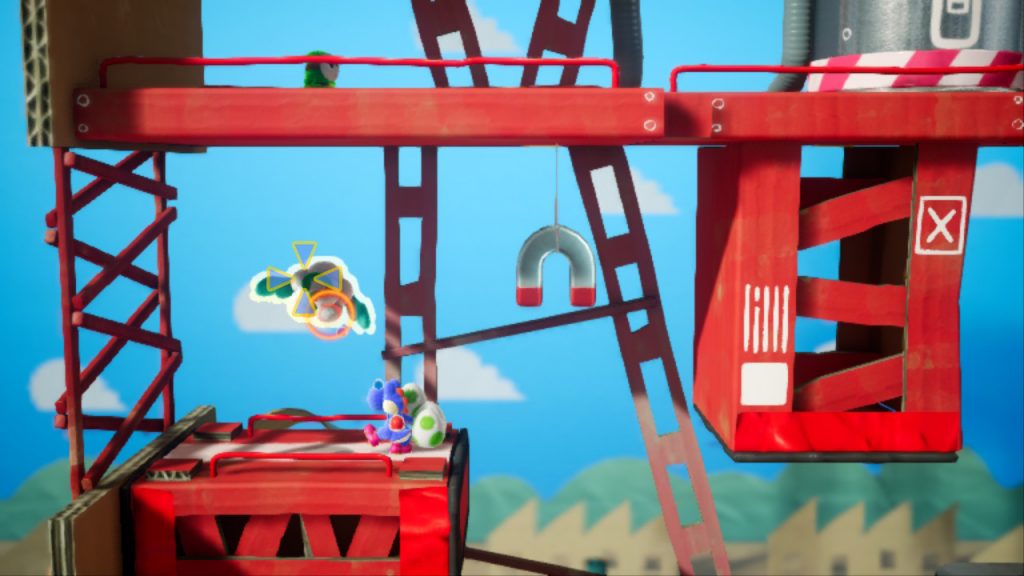 Your first Smiley Flower’s not long after you enter the station. The one above’s reached by the first pair of elevators, so ride the leftmost one and pop the cloud there to uncover it. (1/6) When you ride the magnet-powered elevator upwards, take a left and you’ll find a magnet hovering above three see-through cans — press the button when the magnet’s above the one with the Smiley Flower, and it’s all yours. (2/6) The next one’s a bit tricky: as you go rightwards, hold the button as the magnets descend down and pick up the weighted elevators. When that’s all done, let go and dash across the elevators as they ascend, then quickly slide underneath the last one and you’ll find the flower underneath to your right. (3/6) As you’re riding the big elevator, look to the background to spot a cloud; pop it, then throw another egg to nab the flower. (4/6)

When you’ve landed on the moon, the next flower will require some octopus-work. When you come across the second tentacled alien, swallow it, then spit it out across the platform and Flutter Jump across to find the fifth flower. (5/6) The sixth and final flower’s within the Red Clock Cloud afterwards — ensure you have enough eggs, then pop it and bop all three Monty Moles hiding within the craters. (6/6) 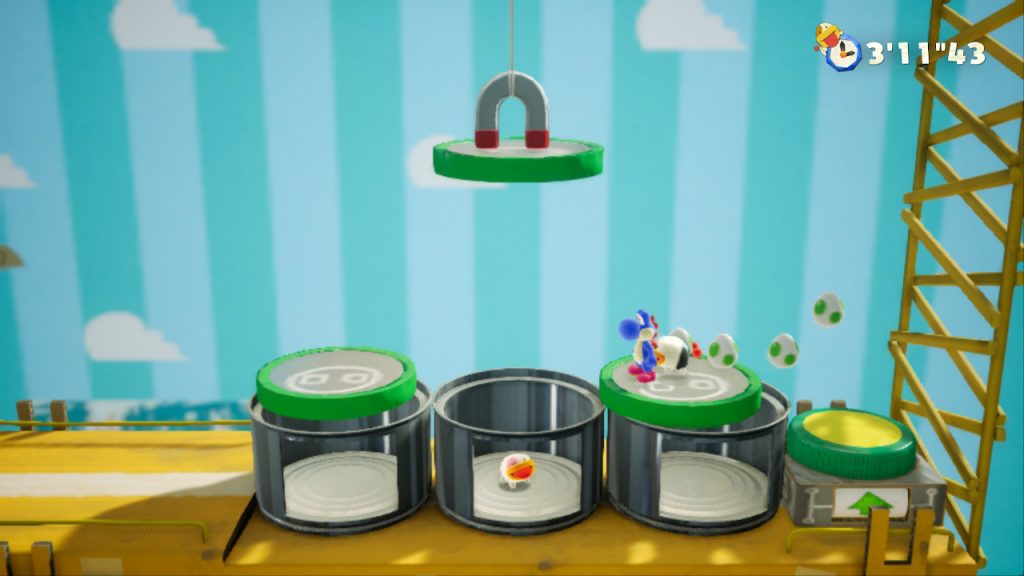 Just what you’d expect from those Poochy Pups: they ended up in so much mischief that one of them’s running about on the moon! Grab that pupper running about in the background just before you enter the rocket, then fly back to the station. As you’re riding down the elevator, smack down the puppy flying down in the background, then head down to where you found the Smiley Flower in the see-through cans. A Poochy Pup’s locked within one, so operate the magnet to lift the lid. 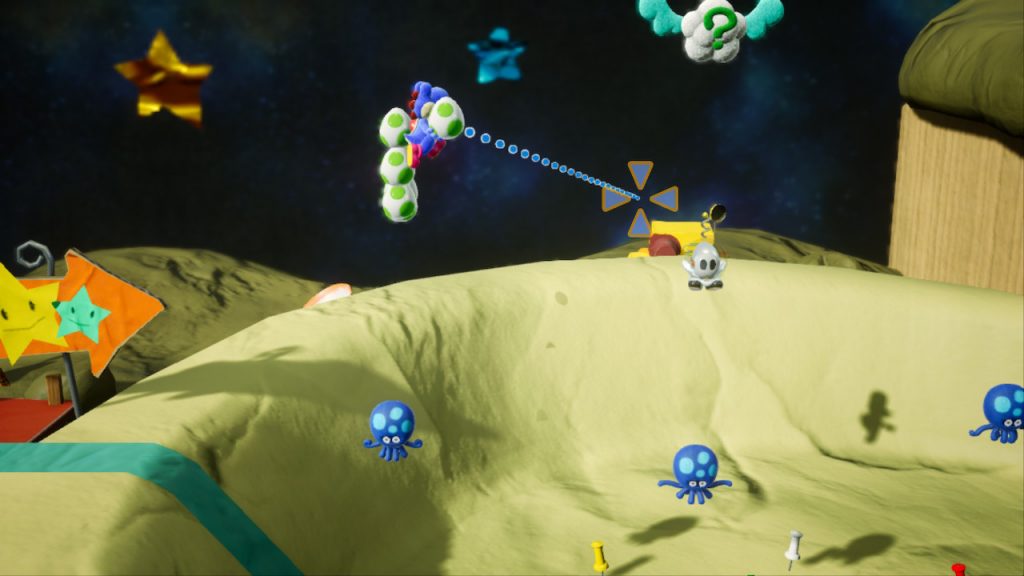 Lunar Lander: Just before the goal, look down to the crater to spot this yellow wonder of science. (Or, well, you could just do what I did above and leap up from the crater.)

Command Module: As you’re searching for the Poochy Pups on the Flipside, Flutter Jump over to the tower where you found the fifth Smiley Flower and you’ll find this module raised in the distance.

Unidentified Object: Six of these alien UFOs are scattered across both Earth and space! Starting with the earthbound crafts: the first is resting in the background just after you enter the station, the second up in the corner just before you jump over the electrical traps, the third hidden up here above the egg block just before the big elevator, and the fourth hiding on the left side of said elevator as you’re rising up. The two on the moon are where you found the fifth Smiley Flower and by the end of the big crater before the goal.

And so The Countdown, uh, Ends. Give us a holler in the comments below if you have any further questions, but in the meantime, check out our Yoshi’s Crafted World guide hub!