Wild dino kids on the loose! 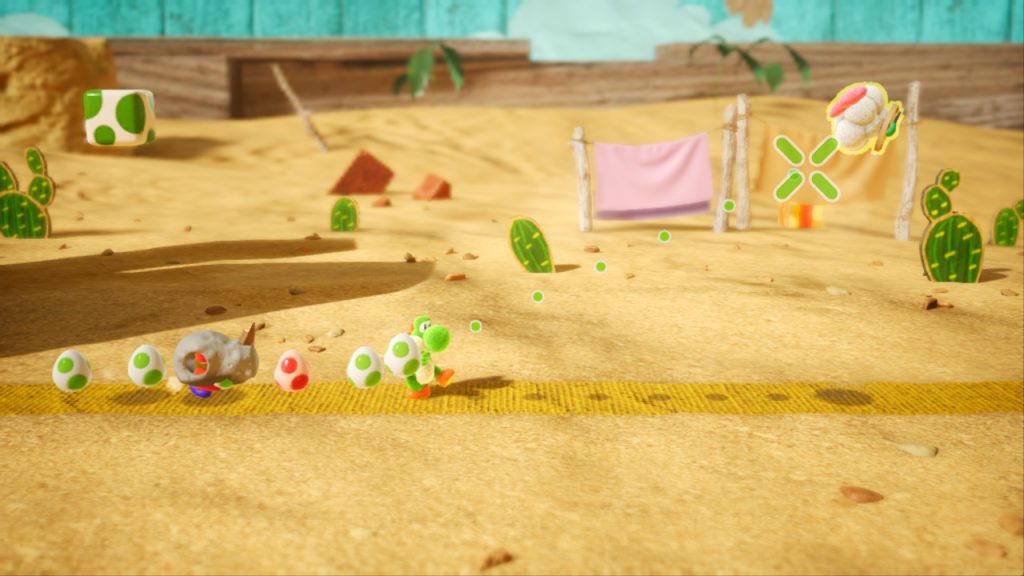 Dastardly dino guys, slow-poke Shy Guys, and a chance to wear a pretty rocking helmet are littered amongst the vibrant desert setting of Dino Desert. With huge obstacles literally blocking your way, you may be in for a smashing good time. Charging forward toward more Red Coins, Smiley Flowers, Poochy Pups, and Souvenirs we at Hey Poor Player are here to help lead you in the right direction. So strap on those skulls as we set off to help out our fuzzy green pal Yoshi grab those collectibles with our Dino Smash Collectible Guide. 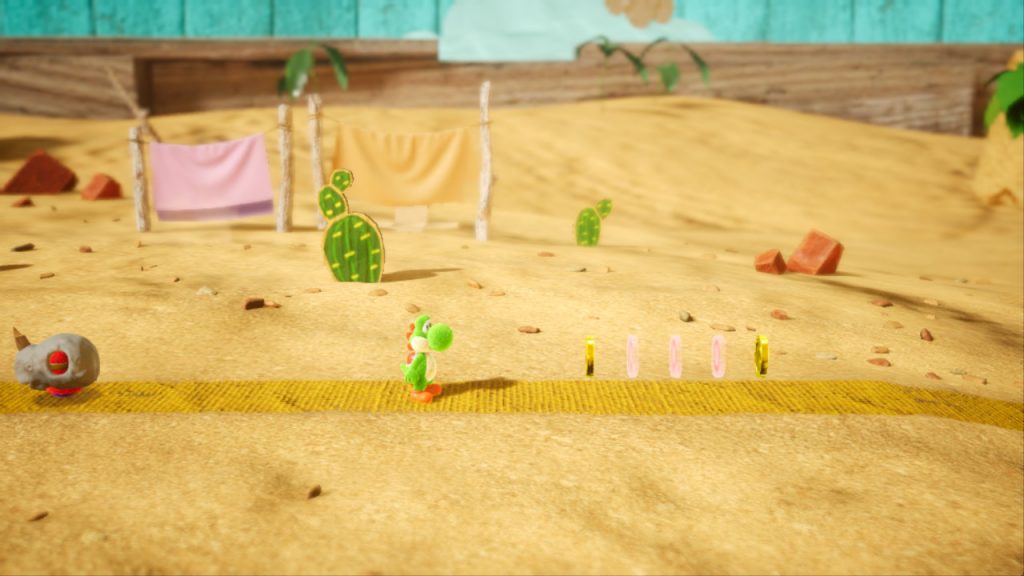 These can be a little tricky to find. You can find your first coin as soon as you start the stage move over to the first platform. Collect the dino skull and smash through the blocks to the left for (1/20). Keep heading right until you run into a stack of bricks. Be sure to try your and get to the top without breaking too many stones. You’ll find four coins hidden with the ones above you (5/20). After moving on you’ll run into some bricks with two Shy Guys will be standing on them. Smash through the bricks to gain one red coin (6/20). You can find one coin right after the question mark cloud. Before you leave the area, make sure you check the background for two sheets, one red and one orange. Aim your egg at the present box behind the orange one for one more red coin (7/20). Next, you will run into a line of bricks just under a winged question mark cloud. The annoying Dino Kid that’s been harassing you will charge through them for three more (10/20). Continue right and you will run into another huge stack of blocks, three coins will be disguised as gold ones will be in the middle of this mess (13/20). There’s another coin around this area. If you haven’t already, run through all the blocks in the stack. There will be a Shy Guy at the bottom and to the left holding one red coin (14/20). Keep on trucking right until you get to an area where there are stone platforms and springy bomb enemies. Don’t let the bombs destroy the platforms, you’ll need them to reach the coins. The coins will be at the second to last platform right above your head (17/20). The next area will have bombs and platforms, as well as some water below. Just use the same method as before and don’t let the bombs destroy the platforms. Get to the second to last platform and float jump up to collect your coins (20/20). 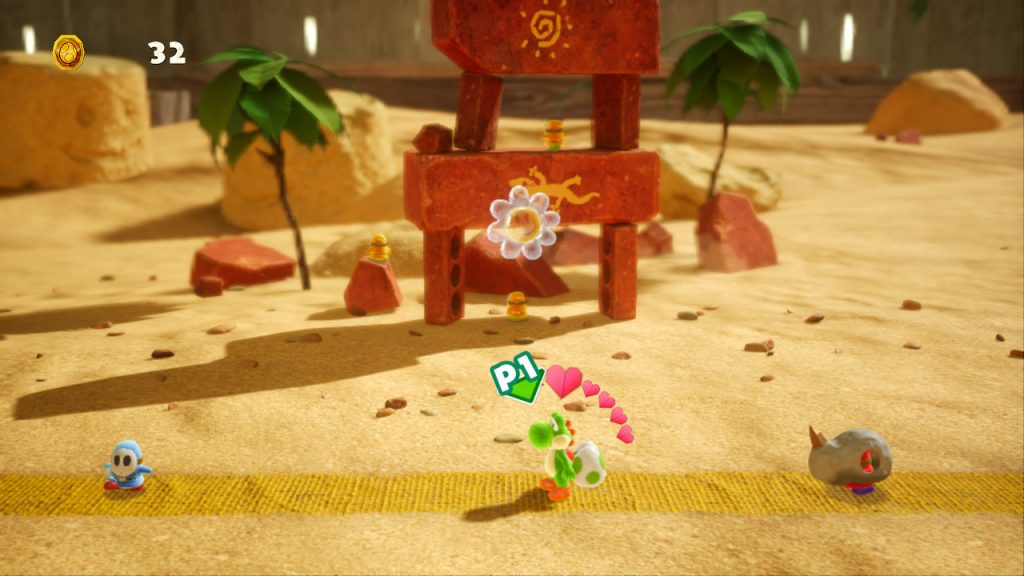 Dino Smash requires a little finesse in order to obtain some of the collectibles hidden among the desert. Your first flower will be found when you run into a vertical stack of shy guys. Knock down the stack and the flower will be yours for the taking (1/6). Move on until you reach the area with a pink clock winged cloud and a Dino Kid. Hit the clock cloud to cause the stage to turn, it will then reveal a block formation with 3 Shy Guys holding blue coins. Hit the coins or the Shy Guys before time runs out to gain your next flower. (2/6) Further to the right, you will get to an area with wooden platforms and a blue clock winged cloud. Hit the cloud to cause 5 red apples to appear. Eat them before the timer runs out and that bad boy is yours. (3/6) Continue on until you reach the area with a rubberband platform and a bridge of blocks. Use your ground pound to get through the bricks but don’t move forward then head to the left underneath the rubberband platform and a cloud will appear. Hit it with an egg to make the flower appear. (4/6) Remember the stack of blocks that was mentioned earlier? You know, the one with the three red coins in the middle? Well, there is also a flower at the very top of this stack of blocks. You just have to carefully get to the top. (5/6) DO NOT destroy all the blocks in the next area. There’s a huge gold/pink spring on the top region of the stones. Use this to jump straight up where your smiley friend will be waiting for you to collect it. (6/6) 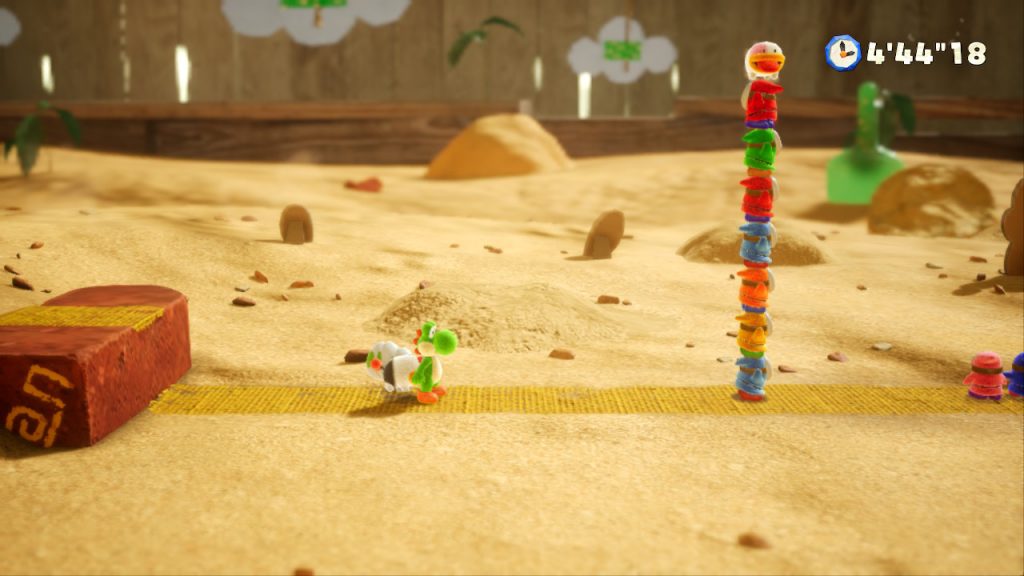 Those poochy pups are at it again, running off and getting lost in the crazy Shy Guy-infested desert and, of course, it’s up to you to find them. The first pup can be found a little further into the stage. Just bust through the huge block formation ahead with a ground pound to the bottom and you will see poochy pup number one right behind the Shy Guy to your right (1/3). Puppy number two can be found not too far from the first one, just keep moving forward until you see three large holes in the background. Your puppy friend will play a game of whack-a-mole with you. One good egg shot will get you the second one (2/3). Keep moving on until you run into a stack of shy guys, just take them down a few notches and your poochy pal will be waiting to be rescued (3/3). 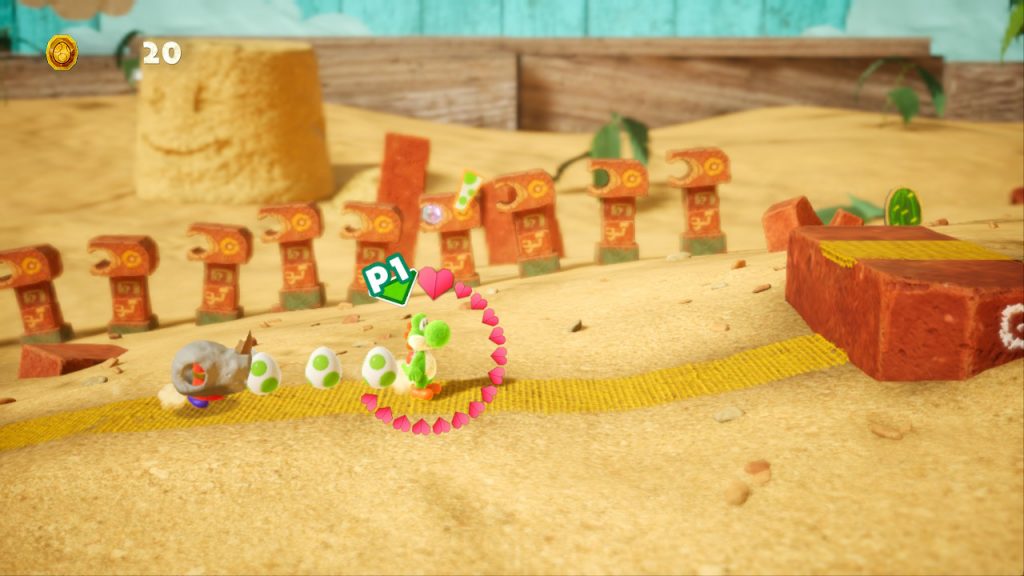 Beach Umbrella: You can find the first souvenir on the flip side of Dino Smash. Head right until you reach the gold/pink spring, jump up to the top and look to your left, your treasure awaits lounging out on the top of a hill.

Bejeweled Monument: This front side souvenir can be found in the region with three rubberband platforms, a Dino Kid, and another dino skull. Look to your right and you’ll see it within the group of identical monuments.

Cactus Rocks: You can find the first one near the beginning of the level. Grab the skull, ram through the rocks, put the skull back, after that just look in the background where you destroyed the blocks and there’s your cactus rock. The second will be in the foreground to the left of the first flower of care. After you do the blue-winged cloud event just look to the foreground for your third souvenir. Your final cactus rock can be found to the left of the second flower of care.

Well, that about wraps up our guide for Dino Smash and hopefully, it will help you guys on your adventures. If you’ve got any questions sound off via the comments section, and in the meantime check out our Yoshi’s Crafted World guide hub! 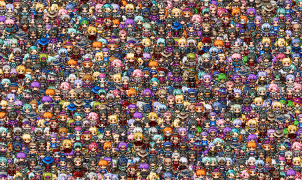 I Have Low Stats But My Class Is “Leader”, So…