Does Shigeru Miyamoto’s long-lost classic hold up to Donkey Kong? 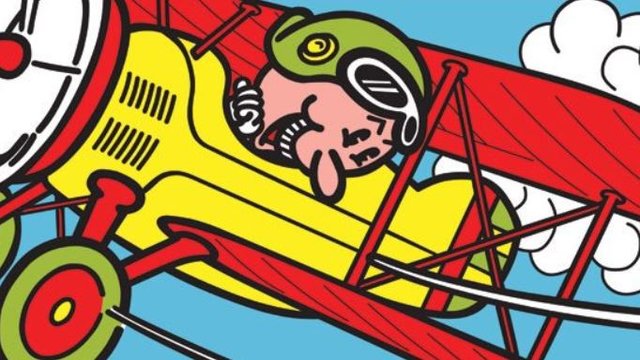 Today’s review is based upon HAMSTER’s Arcade Archives release of Sky Skipper for Nintendo Switch.

And now, a history lesson on an arcade curiosity that, prior to E3 2018, was acknowledged only by the most ardent Nintendo scholars. Much as I’d like to think I fall into that category, I myself was only made aware of Sky Skipper — a limited-release title from Nintendo’s burgeoning arcade heyday — when a fake Smash Bros. leak included the obscure biplane as the then-upcoming Switch game’s “surprise” character. Regardless, the game continues slipping under the radar even after its Arcade Archives release, so a recap is necessary. Just after Donkey Kong began taking over the world in 1981, legend Shigeru Miyamoto and Punch-Out!! designer Genyo Takeda silently developed a spiritual follow-up in Sky Skipper: a game where a Good Samaritan pilot bombs gorillas to liberate a kingdom. The game was developed in conjunction with Ikegami Tsushinki: a manufacturing company Nintendo previously collaborated with to create titles such as Donkey Kong and Sheriff.

While the use of gorillas obviously capitalized upon Donkey Kong‘s success, Sky Skipper wasn’t meant to be — the game fared poorly in American and Japanese test markets, thereby quashing any hopes of a wide release. (Aside from a licensed Atari 2600 port, but we’ll get into that later.) All but one of the cabinets were reconverted into Popeye units, with the lone survivor tucked away deep within Nintendo of Amercia’s recesses. Said cabinet became legendary among collectors and game preservationists alike — Factor 5’s Julian Eggebrecht worked with Mr. Takeda to repair the ROM chip (a condition for shipping Star Wars Rogue Squadron II: Rogue Leader on time), MAME — an open-source emulator preserving arcade classics — somehow acquired a ROM dump years ago, and a three-man team of arcade enthusiasts successfully operated Sky Skipper Project: an ambitious effort not only to hunt down the game’s PCB board, but to reconstruct the original arcade cabinet. (Their Nintendo of America trip to play and analyze the game/cabinet, as well as this write-up by The Arcade Blogger, are highly recommended reads for aspiring game historians.)

Sky Skipper Project‘s passion would finally bear fruit — not only would their replica become a reality and premiere at Southern-Fried Gameroom Expo (Atlanta, Georgia) and Arcade Club (Manchester, UK) in 2017, but Sky Skipper would finally grace the public a year later for Nintendo Switch under HAMSTER’s Arcade Archives label. As noted by NOA’s Don James in E3 2018’s Treehouse Live, Nintendo had heeded its growing interest and gave the order to siphon the ROM from the most appropriate source of all: that one arcade cabinet resting within NOA’s archives. We imagine nothing satisfies the Sky Skipper Project crew more than successfully cultivating awareness for their Golden Grail, but now that we’ve had nearly a year to digest this long-lost Nintendo game, how exactly does it fare among the rest of their retro classics?

To bomb, or not to bomb. 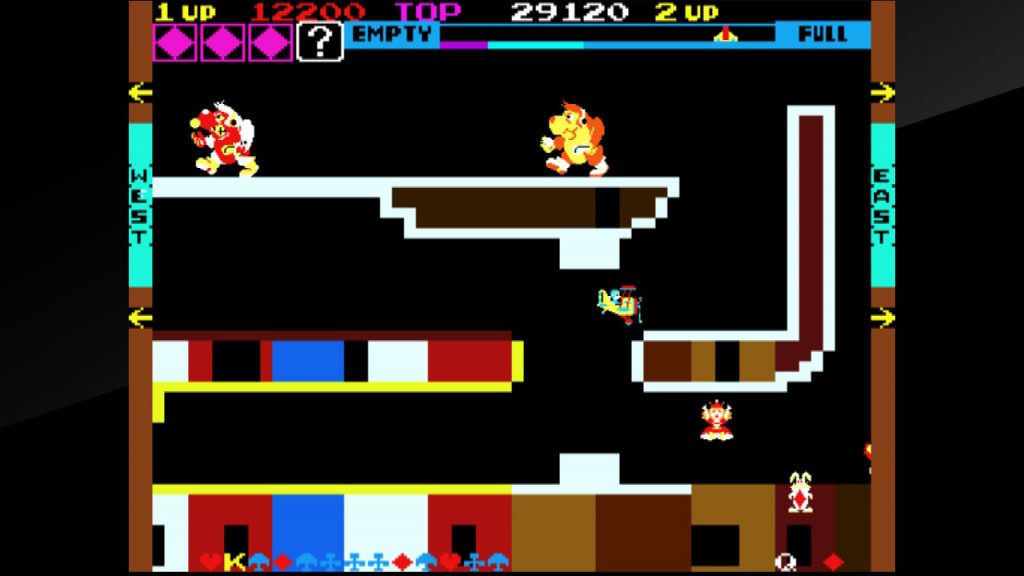 Sky Skipper works something like this: you soar across one of the game’s four kingdoms as you bomb gorillas and dodge their projectiles. Once any one ape’s stunned, the captives pop from their cages in a desperate bid for rescue, which is your cue to swoop in and take ’em aboard. If there’s one advantage it has over Donkey Kong, there’s no clunky movement discouraging for new players; indeed, the Sky Skipper zips about with unbridled confidence, moving about in 8-pad direction with little hindrance. A pattern is formed: bombs are dropped, royals are rescued, and we balance fuel and avoid incoming baseballs all the while.

Regardless, I imagine Sky Skipper failure’s best described as being near-impossible to, uh, describe. To quote former Nintendo spokesman Howard Philips, “Sky Skipper was a confusing thematic mess with hip gorillas, Skip-To-My-Lou music and Alice in Wonderland card rabbits.” Whatever affinity Mr. Miyamoto found with apes, there’s just no getting around the weirdness of it all: headphone-rocking, bubblegum-blowing gorillas jailing royals and card-donning animals as they lob baseballs at a plane-riding renegade. There’s nothing grounded to latch onto — we instantly connect with Donkey Kong‘s King Kong-inspired narrative (a big evil gorilla kidnapping the hero’s girlfriend) and Mario Bros. adding danger to a real work profession (plumbers fending off wildlife while working in the sewers). About the only thing that works is the pilot’s name being “Mr. You”‘ (a humbling self-insert, I’m assuming), but it’s just silliness for silliness’ sake. 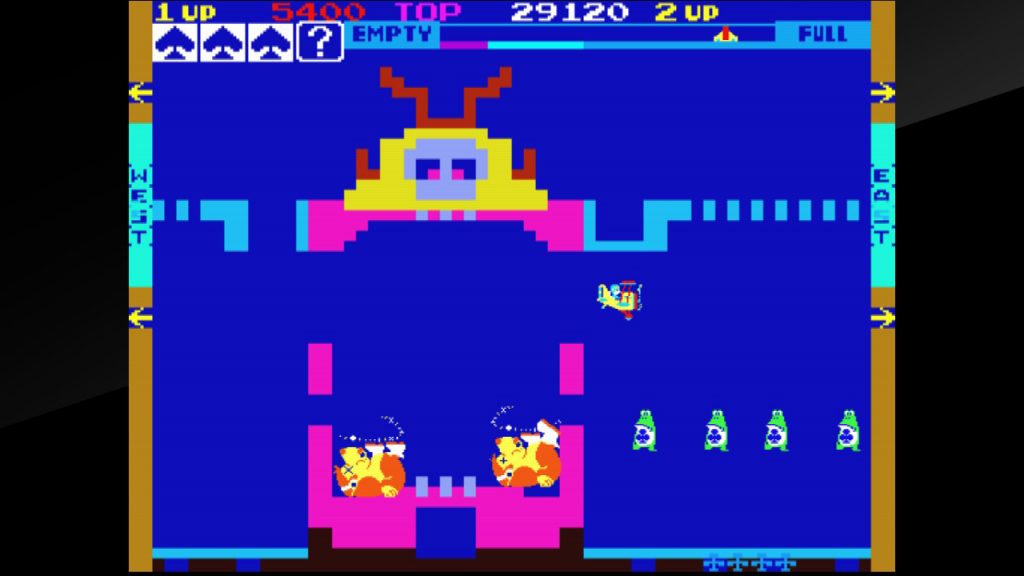 Other missteps further muddle visual clarity. As other review outlets have noted, Sky Skipper‘s not a looker — while the sprite design’s just fine, the entire landscape’s a crude mess of Atari 2600-esque architecture; a unusually primitive detour from the solid detail found in Nintendo’s other arcade offerings. While hardly impossible to navigate, they further contribute to the visual business that’ll certainly produce head-scratching gaffes. For instance, one might only avoid clouds in flying games for visibility as opposed to fear of collision; meanwhile, Sky Skipper forgets condensed water vapor isn’t solid matter and nonsensically punishes unsuspecting pilots for merely touching a stray nimbus, careening their aircrafts into a wild tailspin. Meanwhile, expect a crash or two while attempting to gain fuel — the recharge station’s flag is an acceptable cue, but even the slightest misdirection can produce a deadly accident. And hey, did you manage to spot that woefully clunky suit counter at the bottom of the screen? ‘Cause I only did after a week’s worth of playing.

As this incongruity bleeds into actual play, I’m also unconvinced its card-collecting objective’s a compelling concept for competitive play. See, you earn more points through successively rescuing  the same card suits — be they Blue Spades, Red Hearts, Red Diamonds, and Blue Clubs — but the game’s open composition renders that something of a chore. Gunning for a high score requires zipping back and forth between the levels’ perilous pathways just for this consecutive process, and we’re instead inclined to nab whatever captives lie locked away nearby. (Factor in stressful circumstances such as low fuel or claustrophobic rooms, and it’s little wonder we abandon such direction.) Putting it this way: we enjoy Donkey Kong and Pac-Man because of the calculated unpredictability they provide even within restrictive/linear set-ups; meanwhile, Sky Skipper grows routine and tedious.

Thankfully, said open design doesn’t encourage or wedge the player into any one direction; ironically, Sky Skipper‘s at its best when you strip away any notions of depth and instead just do your thing. This isn’t to say we can’t appreciate its balancing attempts — getting hit by a projectile depletes fuel, for example, so you can’t just shrug off attacks, and I’d like to think there’s some cleverness in bypassing gorillas whenever they leap — but it’s far easier to ignore its missteps when you just turn your brain off and operate on the single-minded directive of rescue. Whether that’ll work for certain players boils down to personal taste, as I imagine some won’t care for the annoying bouts of waiting (mainly whenever gorillas are walking above trapped denizens — ain’t got no time for that when I got baseballs up my ass!), but that drive to try again persists.

Okay, so Sky Skipper‘s hardly a disaster, but why wasn’t the game previously restored? Maybe Nintendo just didn’t see the appeal, or, as Nintendo World Report speculates, there may’ve been licensing hold-ups with Ikegami Tsushinki. Believe it or not, however, the game did see the light of day in an Atari 2600 port. If you thought the game looked ugly in arcade form, we’re certain your eyes are already bleeding from the embedded video above. The homogeneous colors, ear-piercing sound and sluggish speed do Sky Skipper no favors — are those supposed to be hulking gorillas or bastardized takes on E.T.? At least we can commend it for adhering to a theme that actually makes sense — you’re rescuing just plain ol’ animals — yet everything else is such an instant turn-off that I imagine only the most hardened of game chroniclers would dare touch it.

But why linger on such travesties when a long-lost Nintendo relic’s out for public consumption? Board Sky Skipper expecting a meticulous cartoon masterpiece like Donkey Kong and you’ll walk away disappointed, but we’d like to think it fares better than the likes of Urban Champion and Baseball. We hardly ask of anything more from Nintendo’s formative gaming years, and for all its overactive imagination, a  leisurely retro ride may be just what you need. Take off to the skies and give it a whirl. 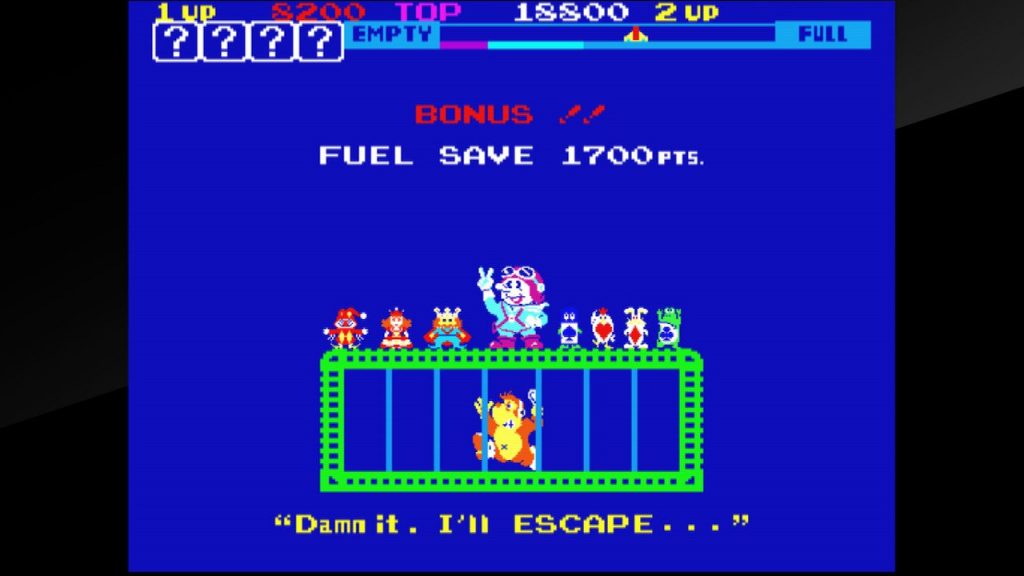 By the way, here’s some trivia for you: Nintendo’s earliest use of a swear! Much as I hate to give up EarthBound‘s crown for anything, it was fourteen years too late on that front.