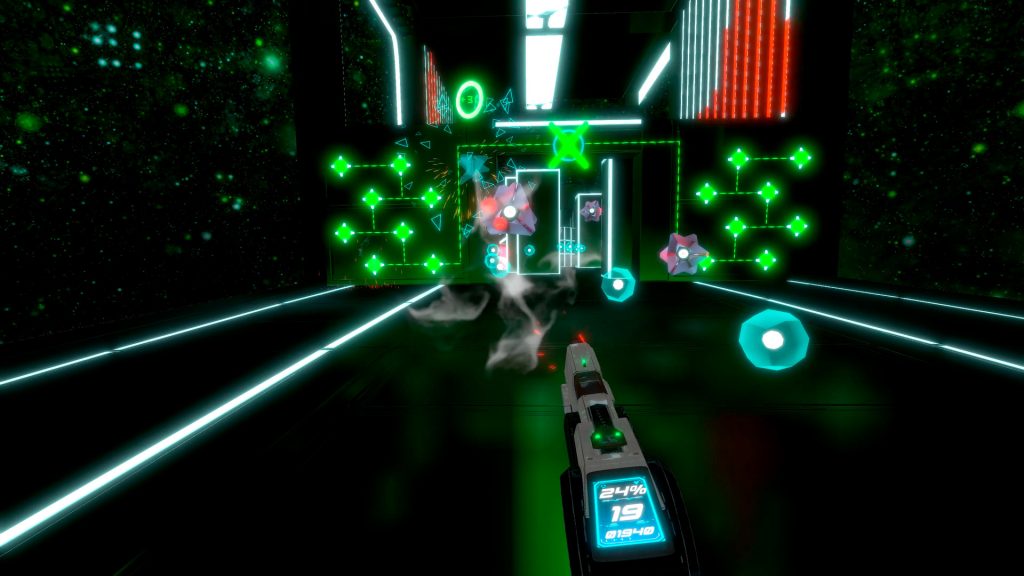 Beat Blaster is a game where you navigate their way through 30 procedurally generated levels while shooting and dodging your way past an array of increasingly challenging obstacles. All of this is done to a mostly monotonous soundtrack, that to be honest, you just kind of forget exists.

To move, you’ve got a choice of options, with thumbsticks on Oculus Rift or PSVR available; tilting your head; as well as another option that developer Ivanovich Games describes in their Steam listing as: ‘intuitive and original control based on the movement of the head.’

Out of the three, I found the tilting control scheme to be the most effective. To move, you simply tilt your head forwards. The further your tilt your head, the faster you go – and if you move your head back – it’ll slow you down. Lean your head back far enough and you’ll come to a standstill.

Beat Blaster has been designed to limit motion sickness, a common phenomenon experienced by VR gamers, by limiting head movements to things immediately happening in front of you. It works to some extent, but after half an hour or so, I did start to feel a bit groggy. 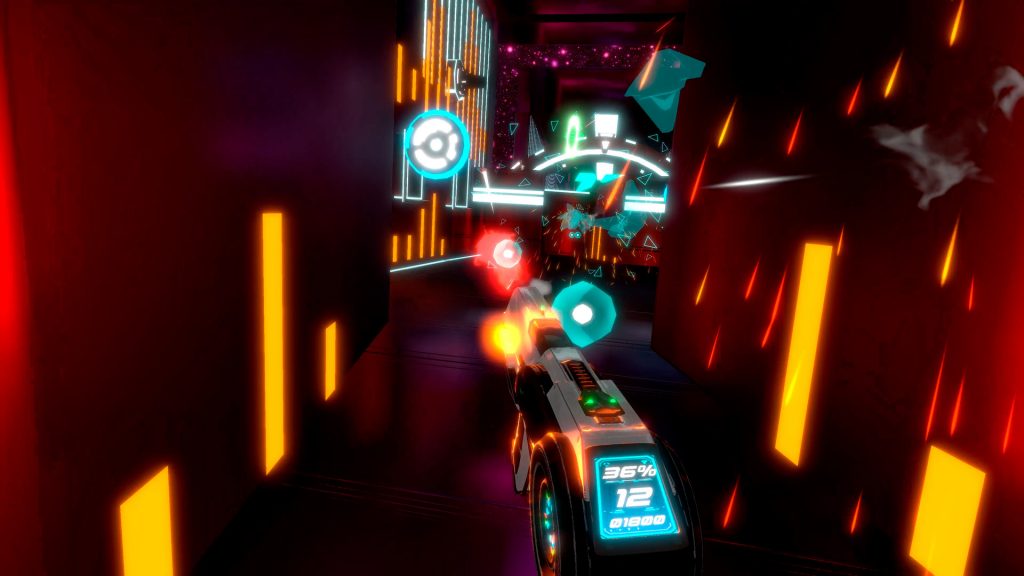 Try Not To Hit Anything

The goal of Beat Blaster is to zip through its 30 levels as quickly as possible while dodging and shooting obstacles along the way. Time is of the essence, as the game urges momentum at every conceivable opportunity – even going so far as to count you out – should you be inert for too long.

As you progress through the levels, Beat Blaster offers up new obstacles for you to conquer. In my four hours with the game, I came across giant worm-like creatures, knock-off replicas of Ghost from the Destiny franchise as well slightly more complex obstacles such as shooting certain combinations of buttons to unlock doors quickly.

I found the obstacles one of the better elements of the game. Some of them were imaginative, fun and fit in well with the aesthetic Ivanovich Games went with.

However, it would be remiss of me not to mention that occasionally, the hit detection of the game is a bit wonky. I’ve had a couple of experiences where I’ve hit the game over screen, and I can’t figure out exactly why that’s the case. Beat Blaster indicates that I’ve hit something, but nothing appears in my view. 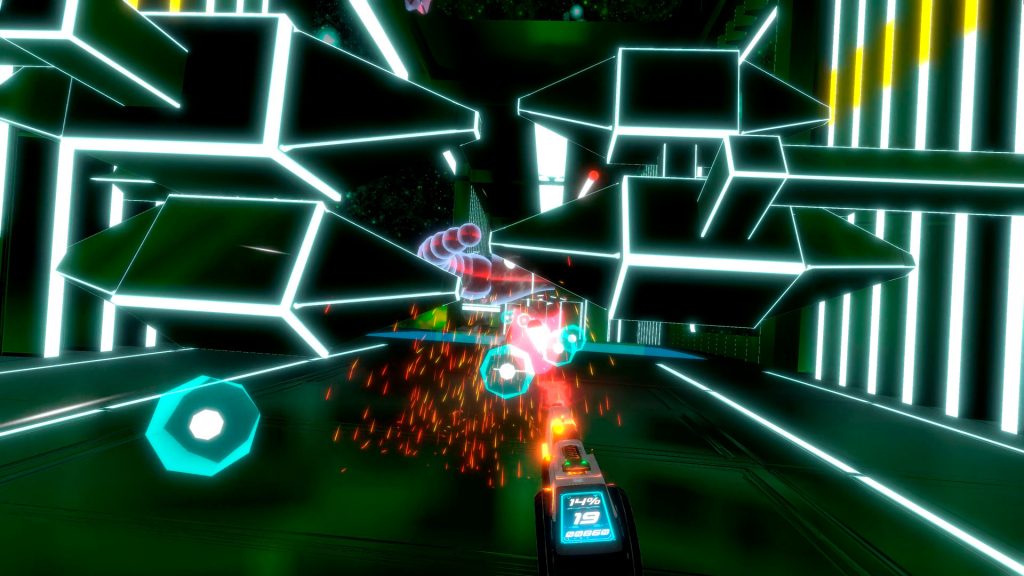 If you get shot, hit anything or bump into a wall it’s game over and you must start the entire level from the beginning, and I think it’s this mechanic that lets Beat Blaster down the most. I was playing Sekiro: Shadows Die Twice (“Sekiro”) at the same time as this game, and naturally, I died a helluva lot.

With Sekiro every single time I died I felt like I’d learned something. Whether it was one of Genichiro Ashina’s swipes that caught me out, or whether I’d figured out when to back off from the Guardian Ape; each death felt like it had a purpose. With Beat Blaster, dying means nothing. You must start the level again, from the start, but with an entirely newly generated level. You don’t learn anything, you don’t figure out how to conquer the specific criteria required to succeed, you simply must get good.

And I don’t think that constitutes good game design. Beat Saber, it’s namesake and contemporary rewards perseverance and patience. The number of times I practiced $100 Bills, Angel Voices and other tracks on expert made me become a better player and I felt rewarded for my progress. Some may argue that procedurally generated levels add longevity, but for me, it cheapens the whole experience.

One For The Sales 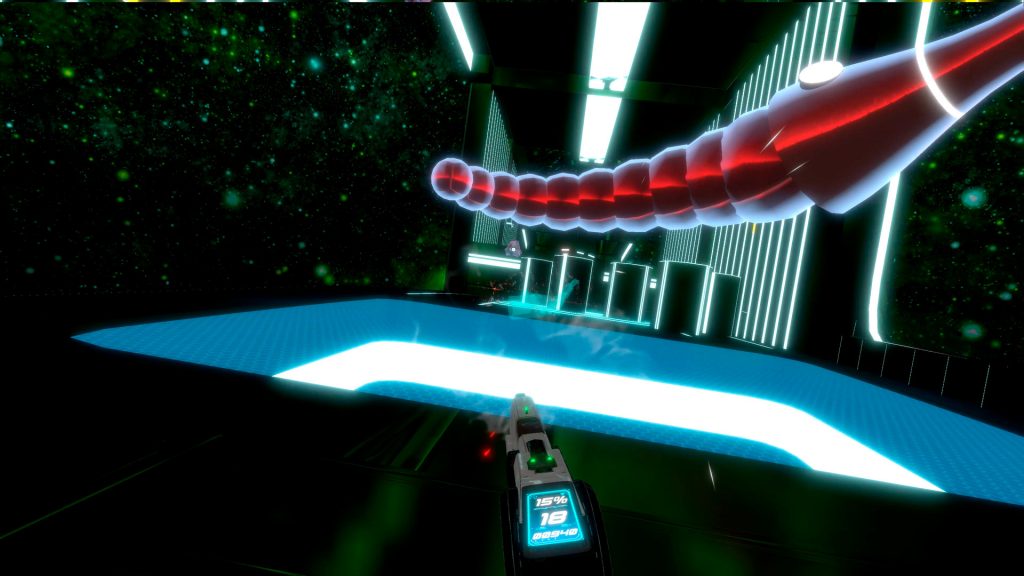 Despite my criticism of Beat Blaster, I don’t think it’s a terrible game. It’s dead easy to pick up and play for 30 minutes, before moving onto something a bit meatier.

But it doesn’t have the same pull Beat Saber has on me, where I could spend hours honing my craft playing that game. Sure, Beat Blaster has a points-based system which encourages you to try and best your previous total, but it doesn’t quite have the same draw or pull its similarly named competitor.

VR has a bunch of awe-inspiring, entertaining and insightful experiences, and unfortunately, Beat Blaster isn’t one of them. It doesn’t offer anything novel, new or memorable. It is, however, a solid, well put-together VR game, that ultimately you should only consider getting if you’ve run out of things to play.

Full disclosure: This review is based on a copy of Beat Blaster provided by the publisher.

A Juan Story. I have been following the Humble Bundle bundles for well over a year now, and Humble Bundle 11 was no exception! There were many great games…