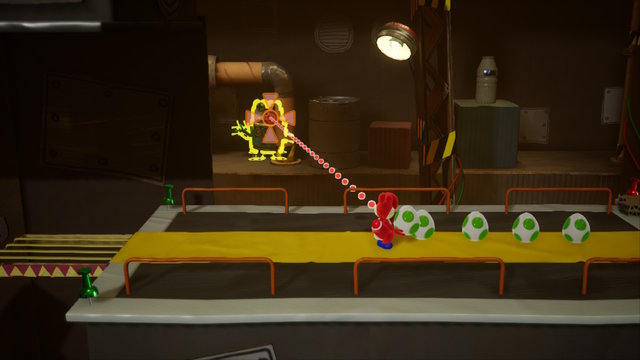 True to its owner, Mr. Geary’s Factory’s full of gears and cogs all clinking and clicking together to impede Yoshi throughout. Be careful when you’re grabbing those Red Coins, Smiley Flowers, Poochy Pups, and Souvenirs, or you just might get crushed! It’s not guaranteed our factory tour below won’t turn you into a Yoshi pancake, so take caution! 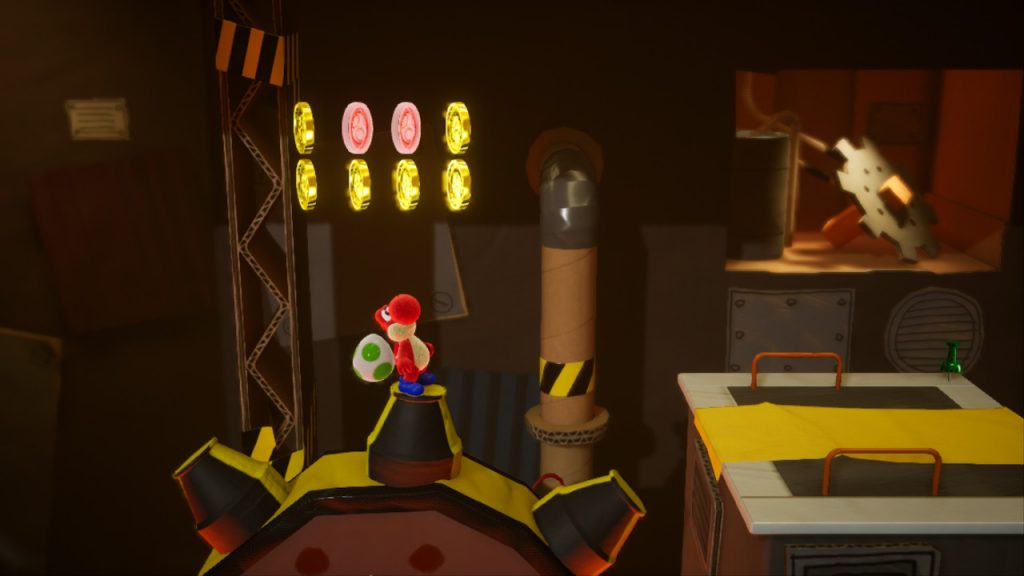 When leaping across the giant lava-embedded gears, you’ll witness a coin collection upon the second; jump through to grab two Red Coins. (2/20) Afterwards, run through the storm of factory crushers and Ground Pound these brown blocks to find yourself in a hidden basement. Hop through the coin circle to earn four Red Coins. (6/20) After the checkpoint, run up and then to the left — Flutter Jump over to the coin-hosting platform to find two red ones. (8/20) Poor Yoshi will eventually climb platform to platform to avoid rising lava, but you’ll need to grab four red coins near the end here. (12/20)

On the next floor, board the giant gear here and wait for one of the two coin collections to score two red ones. (14/2o) Follow the same process for the next gear (16/20), then smack the gold present afterwards for another coin. (17/20) Your last three coins await upon a Cannon Guy-guarded platform next to this giant gear; for reference, it’s the opening gear within the nearby vertical tower, with the coin-producing cloud between its cogs. (20/20) 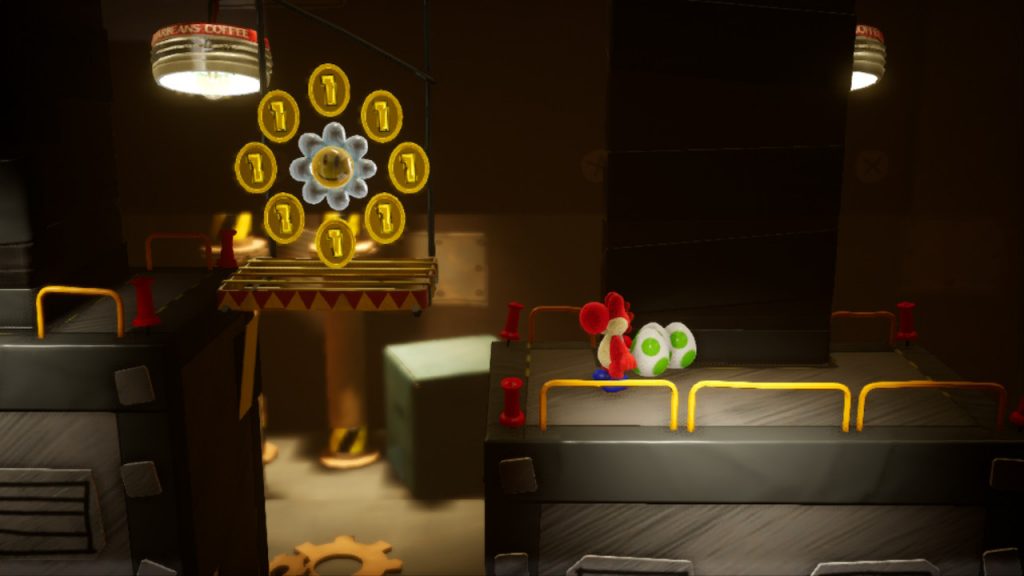 After bursting the heart-hosting cloud, look to your left and observe the factory crusher — think you can hop aboard? Do so, and you’ll find a Smiley Flower as it raises up. (1/5) Later, you’ll stumble across a Blue Clock Cloud; pop it, then jump through all the blue coins to earn the second flower. (2/5) In the rising lava section, keep an eye out for a cloud near the end and smack it for the third flower. (3/5) On the next floor as you’re hopping from gear to gear, keep an eye out for a cloud floating perilously trapped between surging lava pillars — pop it to produce a flower upon the accompanying platform. (4/5) Finally, find this hidden cloud up next to the horizontal crushers. (5/5) 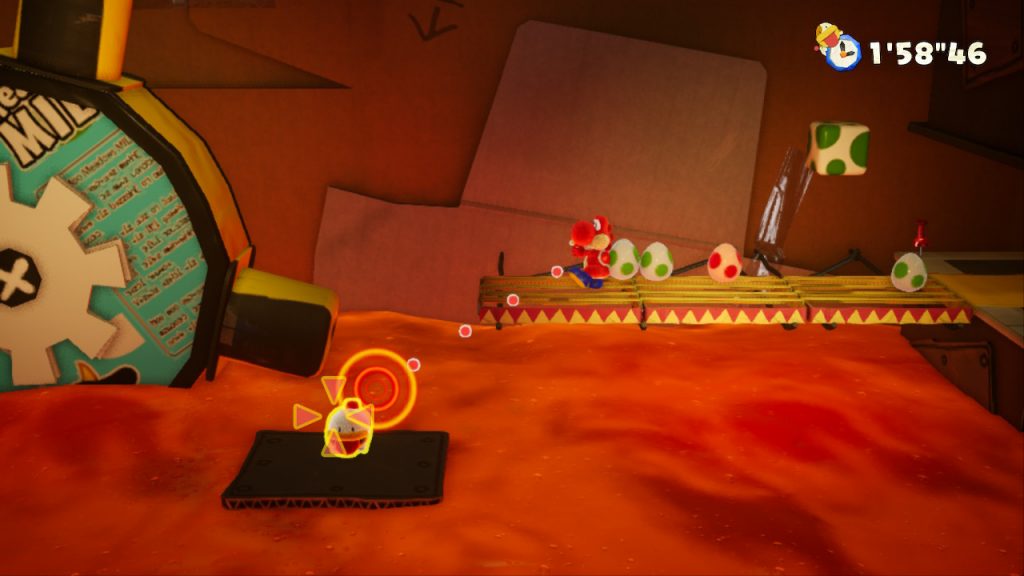 Oh no, those wily Poochy Pups have wandered into the deadly factory! Quickly drop down into the mess of gears and crushers to find the first puppy hanging for dear life — quickly snag it with your tongue, as the gear cogs will force you into the lava. As seen above, the next one’s stranded on a lava-resistant cardboard; strange as that may be, it’s in the shaft with the sinking lava. You can simply snag it when that crisis is over, but you may want to test your sharpshooting skills by Egg Tossing it beforehand. Finally, climb up the crusher near the end where you found the first Smiley Flower, and the third Poochy Pup will be right there. 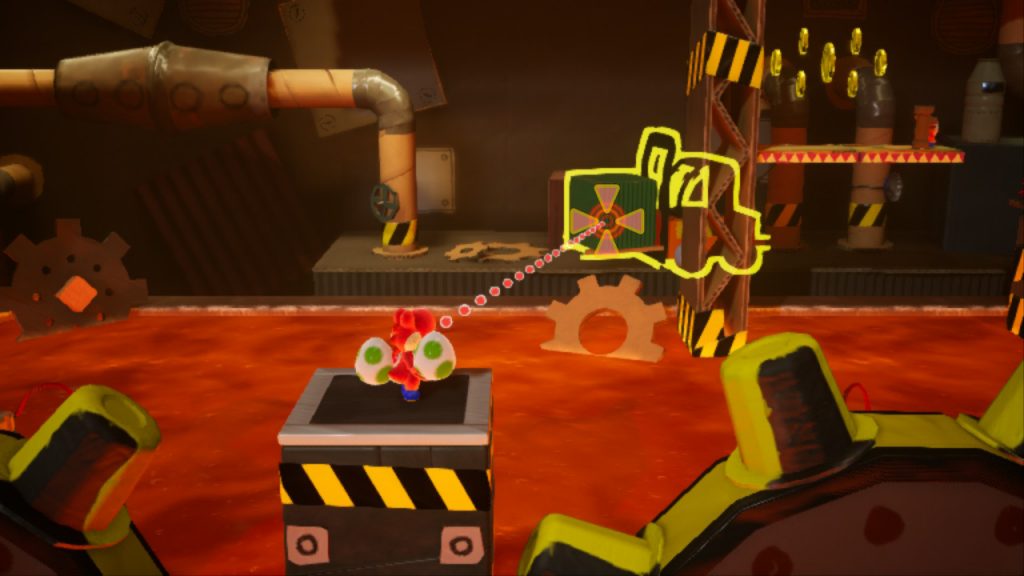 Forklift: As seen above, this lone vehicle’s spotted in the background after you reach the first two giant gears.

Little Mouser: Mr. Geary’s Factory has a bit of a thief problem courtesy of a Little Mouser. Maybe help out Baby Bowser’s minion just this once by catching the mouse in the background after the second checkpoint.

Smiley Gear: Six of these smiling gears are found on the factory’s Flipside. The first one’s just behind you to the left, the second’s obscured by a giant background gear shortly after the first Poochy Pup, the third’s hitching a ride on the gear following the second checkpoint (wait for it to rise out of the lava, and aim from before you reach said checkpoint), the fourth in the background behind the sequence of crushers,  the fifth behind one of the factory crushers just by the third Poochy pup, and the sixth resting in the foreground right before the exit. (Look in front of the final giant gear)

Can Robot: The last of the three Can Robots is just before Mr. Geary’s lair — scope out the background before the big door.

And that’s a wrap for Mr. Geary’s Factory! Give us a holler in the comments if you require any further assistance, but in the meantime, check out our Yoshi’s Crafted World guide hub! 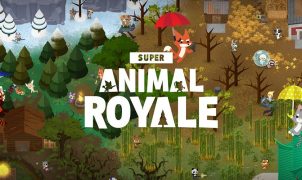 Super Animal Royale Review: Welcome To The Jungle     Have you ever wondered what would happen if you dropped 64 animals into a large map, gave them access…