Time for a grand heist! 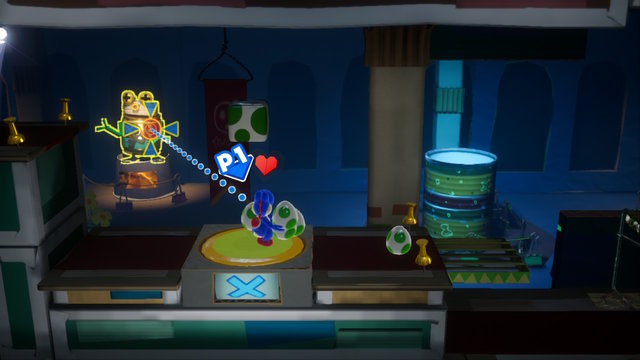 Whoever thought the Yoshis could pull off a great museum caper? Still, those bucket-headed guards won’t let them pilfer all the Red Coins, Smiley Flowers, Poochy Pups, and Souvenirs without a fight, and they’re all too ready to gang up on our favorite dinosaur. Make no mistake: Skulking Around’s a tough level, and we’ve got outlined the ultimate plan to rob this museum blind. 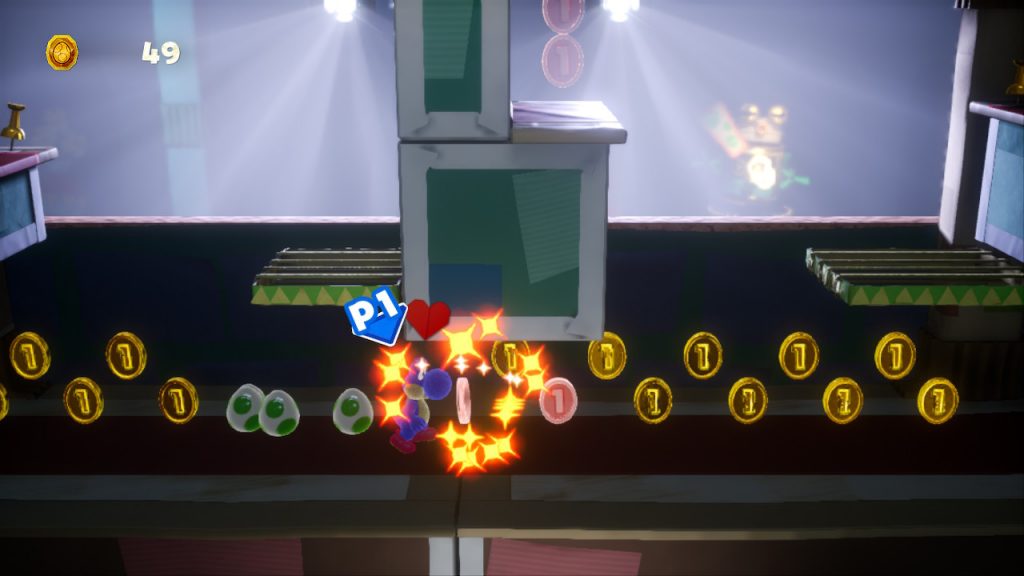 As you breach the museum’s basement, it’s all but certain you’ll trigger the alarm upon the moving platform — hop to the leftmost platform to grab the first two coins! (2/20) Next, hurry over and under this platform just before the exit and snag the two coins there just before the exit. (4/20. Did you catch how Yoshi perfected invisibility cloak there?) As you make your escape past the checkpoint, navigate around the moving wall (as you’ve probably guessed, the light it obscures will notify patrol) and grab the two coins by the guard portal. (6/20) The next one’s tricky: observe the sliding wall and you’ll notice a cloud sneakily shifting positions between the surrounding pillars. Unfortunately, it’s timed to move when the wall plummets down, so you must purposely expose yourself and quickly Egg Toss it to earn three coins as seen above. (9/2o) When you’ve pressed the switch for the all-clear, go back and climb up the alcove for another two coins. (11/20)

Just after the Blue Clock Coin, scan the background for a present here and smack it open for one coin. (12/20) You’ll find the next two soon afterwards here, but take care not to make contact with the floor spotlight. (14/20) Past the second checkpoint, as you dodge the spotlights behind the moving walls, collect these three coins here. (17/20; also, just standing there while the alarm’s tripped isn’t advised — that Yoshi’s a trained stunt-professional.) Your last three coins are waiting above a guard portal near the end (look for an all-clear switch nearby)). (20/20) 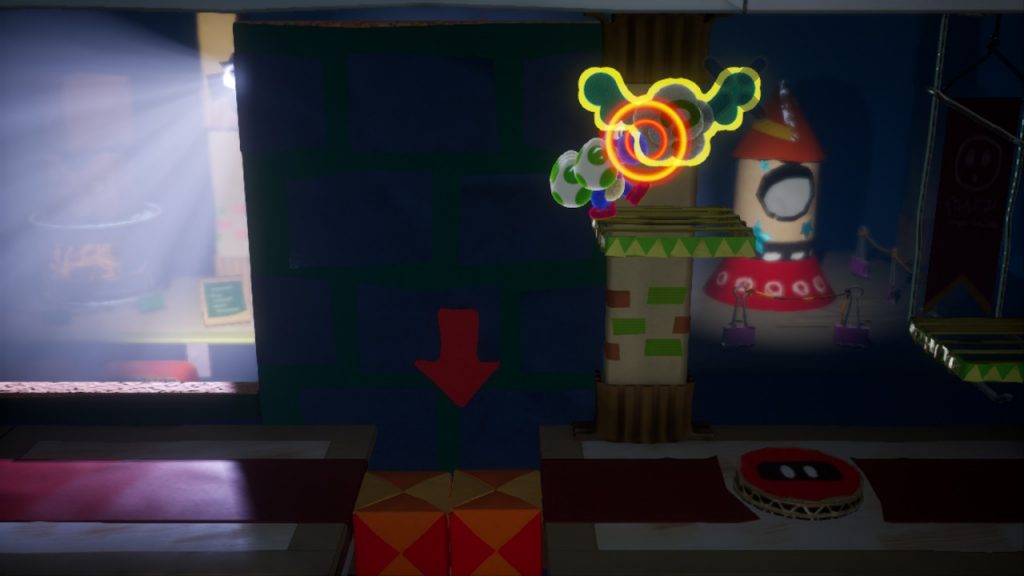 Just before you Ground Pound into the basement, hop onto the upper platform by the rocket replica to reveal a cloud; pop to earn the first flower. (1/5) Inside said basement, you’ll likely trip the alarm as you jump onto the moving platform — uncover the cloud upon the rightmost platform and pop it for a flower before the guards swarm you! (2/5) The Blue Clock Cloud soon after the first checkpoint will have you popping three balloons by more moving walls — just pay heed to how the middle one’s hiding in the background, and you should be fine. (3/5)]

The next Blue Clock Cloud involves collecting Blue Coins, but beware: the moving platform’s under careful watch. In the interest of time, you may desire to trip it anyway and quickly all three coin groups for the flower. (4/5) Finally, pop the cloud by the moving wall nearby for your final flower. (5/5) 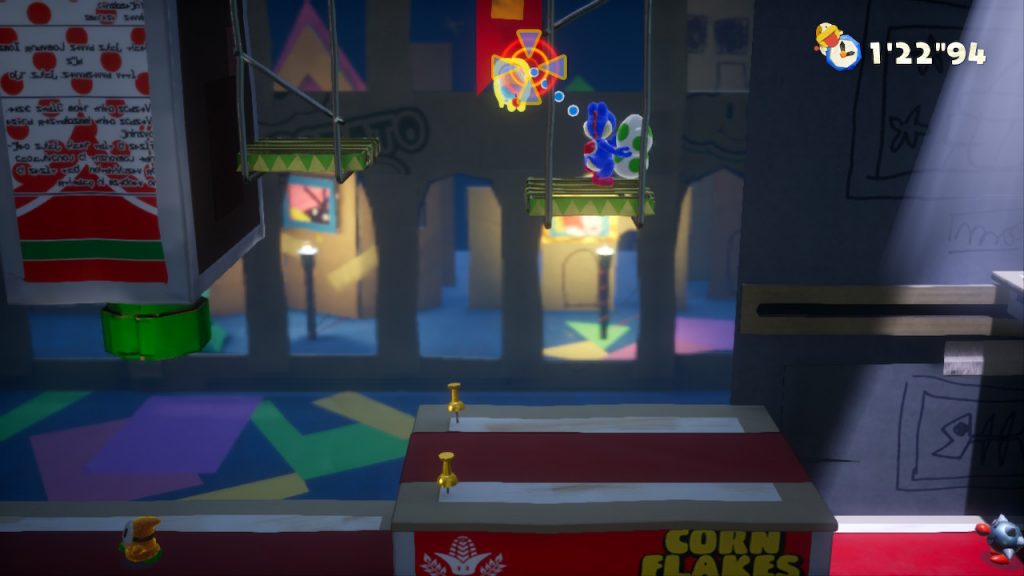 Looks like the Poochy Pups are pulling off a heist of their own! Thankfully, as evidenced above, it didn’t seem to go well; you’ll find this banner-hanging pupper just past the first checkpoint. However, the second one  definitely has the makings of a thief, as it can only be found by popping this hidden cloud, thereby removing the nearby wall and unveiling the background doggo. (For reference, you’ll find this spot just before the third Cheep Cheep Picture.) Finally, you’ll find the third and last puppy treading on a nearby moving wall near the end. 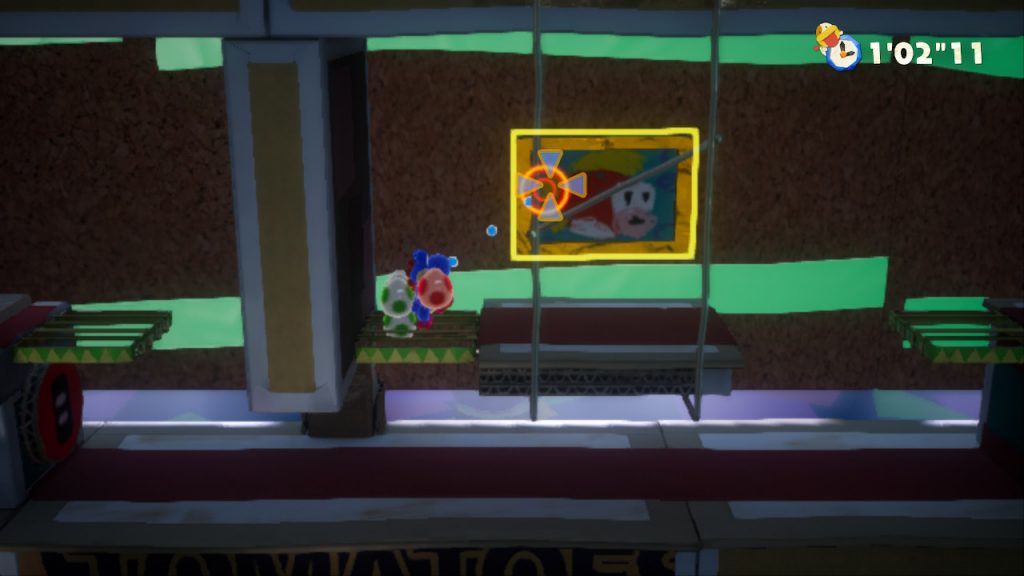 Cheep Cheep Pictures: Five of these evocative paintings decorate the museum walls. You’ll find the first within the first set of moving walls — aim carefully so you don’t get caught by the spotlight! The second’s past the first checkpoint and underneath the first Poochy Pup, the third’s on another moving wall before the second checkpoint, the fourth is just down below that, and the fifth’s in the background just before the goal here.

Vases: And not just any vases, either: they gotta have flowers! The first is behind the first checkpoint, the second’s cleverly hidden just beneath where you find the robot souvenir, the third’s behind the second checkpoint (coincidentally, it’s the third in a row of pots), and the fourth is behind an all-clear switch soon afterwards. (You’ll have to trip the alarm to find it.)

Whale: This majestic model rests at the second checkpoint. Can’t miss it.

Can Robot: In the background by the shifting-wall nonsense just past the first checkpoint, where you found coins 7-11. Thankfully, you can just waltz over to the Egg Block waiting afterwards and aim from there.

And that’s enough Skulking Around! Let us know if you have any additional questions via the comments, but in the meantime, check out our Yoshi’s Crafted World guide hub!

The Good, The Bad, And The Stealthy Stealth games need not be violent to have tension or high stakes; I remember being so frazzled playing Harry Potter and the…