Be Afraid of the Dark Collectibles (Yoshi’s Crafted World Guide)

Or be traumatized. Your choice. 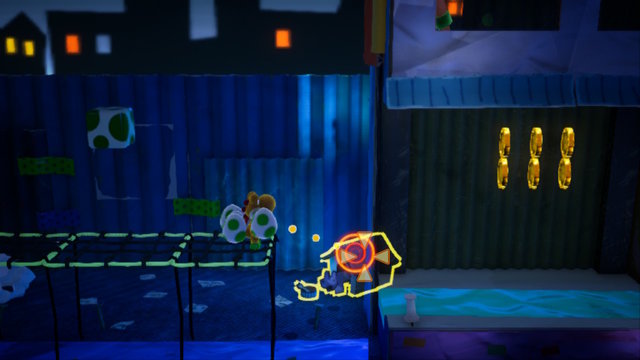 How on earth was this level about crazy ax murderers hunting down Yoshis approved?!? Forget Haunted Maker Mansion’s grim reaper — we don’t expect our poor dinosaurs to ever recover from Be Afraid of the Dark. Regardless, for the sake of those Red Coins, Smiley Flowers, Poochy Pups, and Souvenirs, they’ll just have to take one for the team. At least they have our guide to see them through. 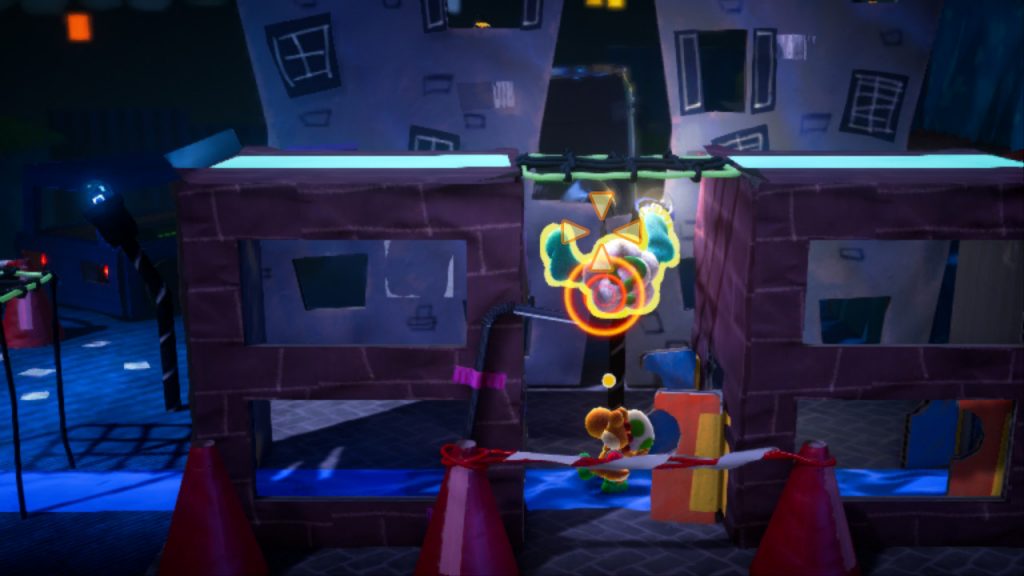 When those creeper Lakitus begin lobbing Spinies, duck between the above two buildings to uncover a hidden cloud; pop it to earn three coins. (3/20) Upon encountering the third ax murderer, peer closely into the darkness to spot four brown blocks; either lure the maniac to chop them up for you, or take a leap of faith in Ground Pounding them yourself to uncover four Red Coins. (7/20) Soon afterwards, more Lakitus will ambush you with Spinies, but pay them no heed; instead, Flutter Jump over to this platform to find a hidden cloud hosting five Red Coins. (12/20)

Hit the Hint Block that ominously warns “He’ll come from behind,” to lure out another ax-crazy fiend! No, we’re not digging your grave; in fact, note how he just broke through his plated window — he’s hiding a present within his lair! Smack it open for another coin. (13/20) Past the second checkpoint, you’ll eventually climb clotheslines guarded by butchers. Lure the first on the right out his home, then sneak by to steal three Red Coins. (16/20) Finally, just before the final ambush of crazy killers, you’ll find the four last coins in this hideout. (20/20) 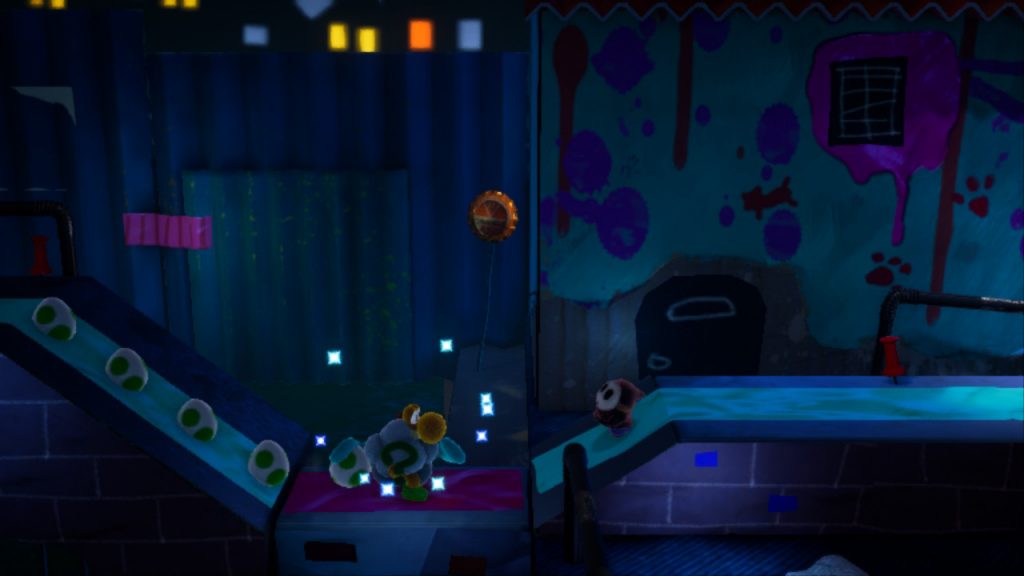 After your narrow escape from the second ax murderer, look for a cloud flying above. Pop it, then travel up the newfound stairs for a Smiley Flower. (1/7; watch out for the axe maniac hiding up there!). When you’re on the run from another ax-man, run by the above spot near the chase’s end to uncover another flower-hosting cloud. (2/7)

Underneath the aforementioned hint block, avoid the ax-wielding crazy below to break open the cloud he’s guarding for another flower. (3/7) Pop the Red Clock Cloud to engage in a Lakitu mini-game, but don’t waste your time sniping off the bespectacled fiends, as you’ll recognize they’re attempting to distract you with fake Smiley Flowers. Aim for the real flower down in this bottom-left spot. (4/7)

You’ll stumble upon a Blue Clock Cloud shortly after; unfortunately, its tomatoes are guarded by another serial murderer, so you’ll have your, uh, tongue full attempting to steal his stash. (6/7) Finally, pop this flower-hosting cloud near the end when you’re escaping the final storm of ax murderers. (7/7) 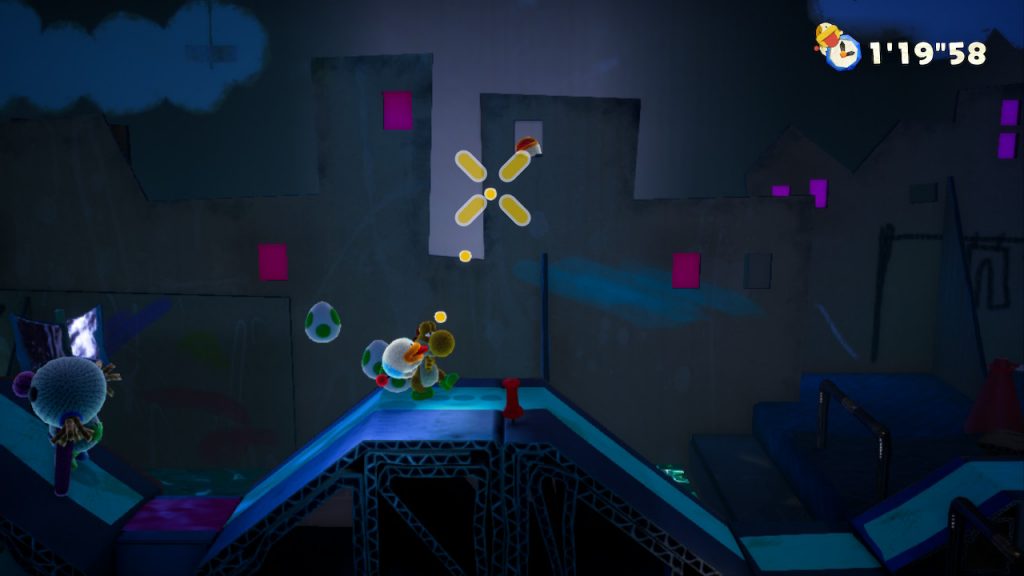 For all the mortal danger lurking about Shadowville, the Poochy Pups don’t seem to mind chilling with crazed killers; actually, the first puppy’s renting an apartment with one! Rescue him by using the same trick you used to lure the ax-man outside home and then dash inside. The next two are peeking out windows as you progress through the level; as seen above, Yoshi isn’t in the mood to play hide-and-seek. Who can blame him? 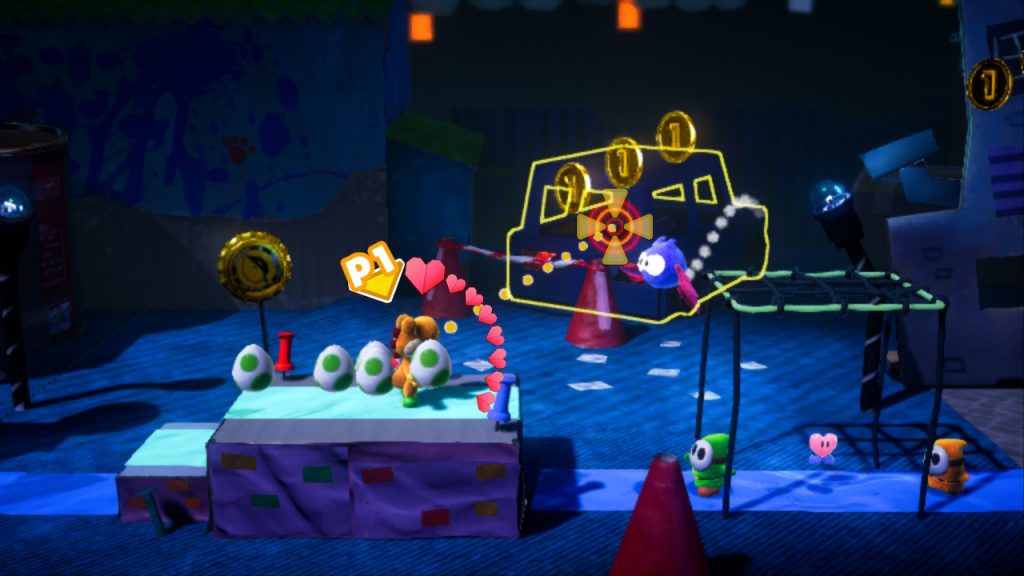 Nighttime Vehicle: As seen above, this abandoned car’s resting in the background just after the first Smiley Flower.

Trash Cans: There’s four of these gross garbage cans lying around. The first is in these Fake Smiley Flower-rented apartments (aim here), the second in front of these two giant cans (it’s before the second checkpoint), the third rests along a cardboard wall not long before you reach the third Poochy Pup, and the last one’s on the building opposite of said Poochy Pup.

Dog House: After the second checkpoint, this occupied dog house rests by the guarded Egg Block. Save him.

Can Robot: Before the second checkpoint, you’ll find this robot sitting outside a murderer-infested home. He’s not alive, sure, but robots don’t deserve to be butchered either.

Congrats on facing your fears in Be Afraid of the Dark! Let us know in the comments below if you have any further questions, but in the meantime, check out our Yoshi’s Crafted World guide hub!