From Zero To Hero 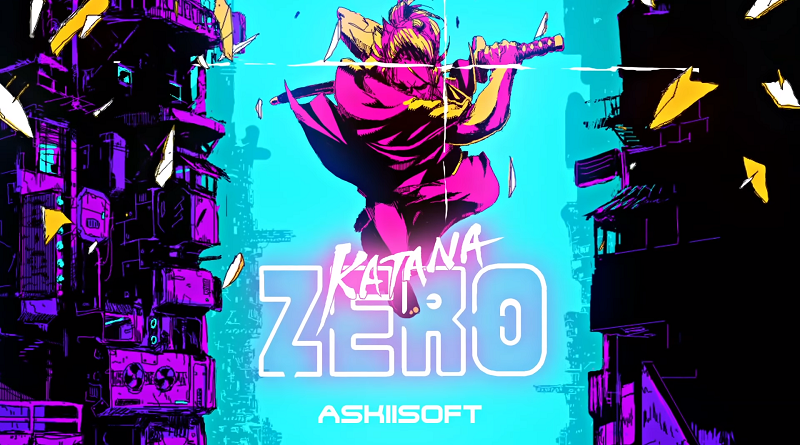 Devolver Digital has made something of a name for themselves over the past several years for publishing titles with a very distinct flavor. Often brash, bloody, and neon-saturated affairs accompanied by pulsing synth arrangements such as Mother Russia Bleeds, Crossing Souls and the iconic Hotline Miami series, their catalog of games seems aimed straight for the heart of gamers with an affection for 80s fetishism and the stomach for a bit of the old ultra-violence.

The publisher’s latest offering, Katana Zero, fits this theme like a well-worn glove. Developed by Askiisoft, the team behind the games Tower of Heaven and Pause Ahead, it features all of the hallmarks you’d expect. The combat is brutal and gruesome, there are foul-mouthed Russian crime lords to kill, and the story — equal parts surreal and cerebral — is sure to work its way deep into your gray matter. Of course, the killer presentation can only carry a game so far. Does Katana Zero deliver enough substance to go with its cyberpunk samurai style? Well, slip on your hakama, sharpen your katana, and read on to find out. 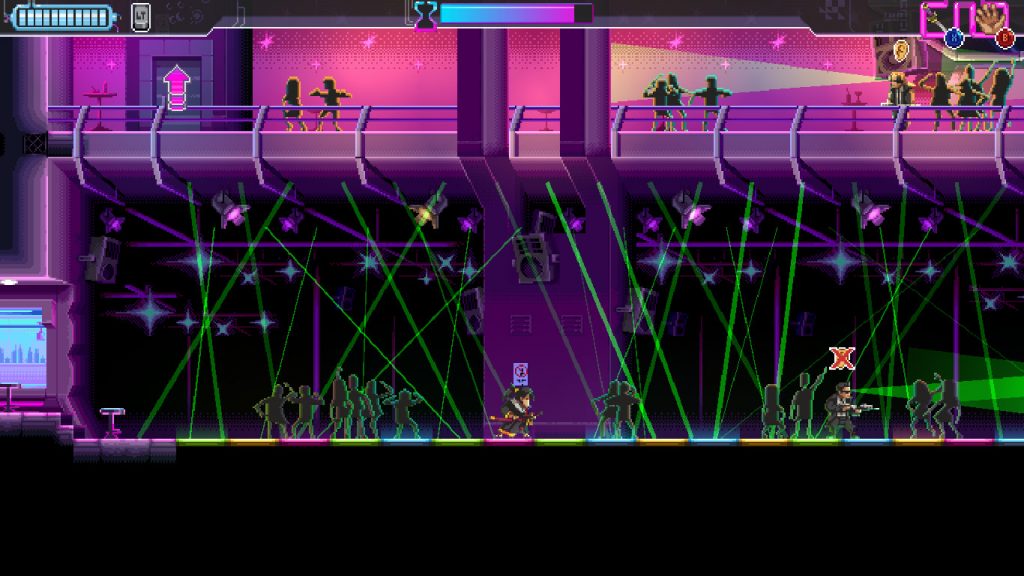 Blending into crowds and using the club’s music to mask your approach is key to surviving this stage.

Right from the jump, Katana Zero feels like the byproduct of a one night stand between Shinobi and Hotline Miami. From its satisfying blend of side-scrolling swordplay and acrobatics to its tightly choreographed stages that unfold like a sadistic Rube Goldberg machine. Well-timed strikes, wall jumping, and split-second decision making are the name of the game here, as even the best-laid plans can fall apart at the slightest hesitation. It’s an intoxicating combination that doesn’t skimp on the ghoulish spectacle. Severed heads roll across the ground. Limbs and cleaved torsos paint the walls with gallons of blood — all contrasted against more bright magenta than you’d find at a Carpenter Brut merch booth.

While the game may look like your average retro-inspired action title, that couldn’t be further from the truth. Katana Zero is a beast of a game that demands your full attention. Barging in and swinging your sword all willy-nilly will almost always result in a messy demise thanks to the game’s instant death system. With just a single hit standing between the player and certain doom, you’ll need to approach every room like a puzzle and plan your assault down to the last slash to make your way through the game’s 12 grueling stages.

When progressing through each area, you’ll need to pay close attention to what kind of weapons your enemies are packing. For example, rifle and pistol bullets are fast moving and lethal, but they can also be deflected with your sword and sent straight back into the foreheads of your attackers. However, attempting to do this on enemies who wield shotguns will prove futile as you’ll likely be blown away by buckshot. Other foes don riot shields which, when slashed, will leave you stunned or worse, can be used to knock you on your ass. The best way around these armored adversaries is to roll behind them and get a quick slash in with your sword.

More often than not, you’ll be fighting several different enemy types at once with mere milliseconds to clear out a room. When this happens, you’ll need to adapt and strike with laser precision if you want to survive. It’s kind of like a rocket-powered game of rock, paper, scissors. Only losing the contest usually results in someone’s head being lopped off. 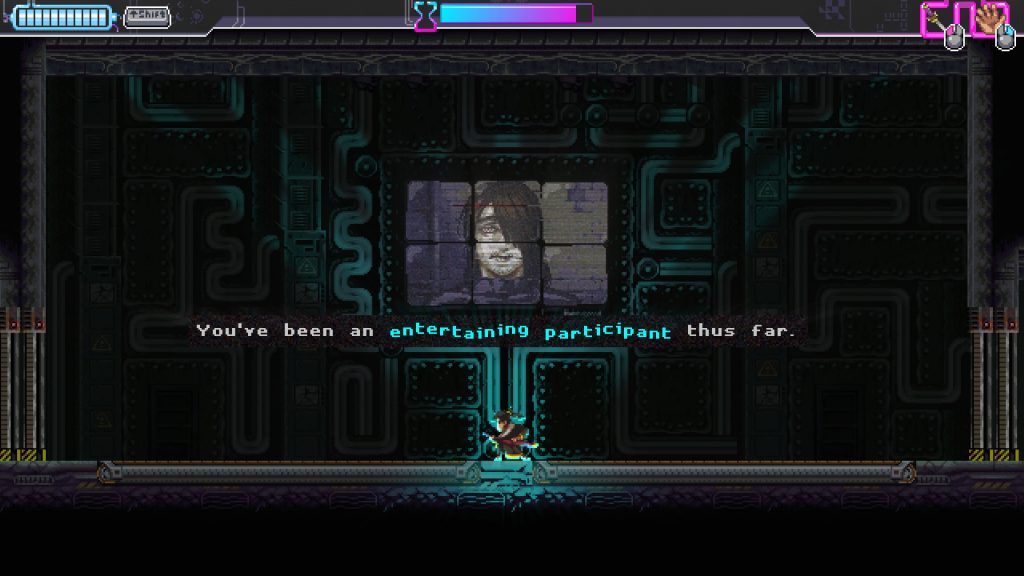 Make no mistake; the odds aren’t in your favor. You do have one handy trick up the sleeve of your hakama, though: Chronos. This drug, which you obtain from your rather dubious handler and psychiatrist between assignments, allows you to manipulate time itself. Tapping the left trigger activates your Chronos powers, which function similarly to Max Payne‘s bullet time mechanic by slowing time to a crawl to provide new offensive and defensive opportunities. When activated, Chronos makes it much easier to knock bullets back at enemies or quickly lob a smoke grenade, butcher knife, or whatever else you might be holding in your off hand. The drug is also vital for navigating stage hazards like gun emplacements or spinning fan blades. Chronos is a finite commodity, though, so you’ll want to use it sparingly.

I promise you; you’re going to die a lot in Katana Zero. However, thanks to the power of Chronos, mortality is no big deal because you never actually die. Instead, each failed attempt is merely a planning run as the drug allows the user to see through time. The only “real” effort is presented as a replay on a black and white monitor after you finally manage to clear an area.

Even with the extensive use of combat drugs, things can go south fast if your reflexes aren’t twitch-perfect. If this sounds uncompromising, well, it is. But that’s the beauty of Katana Zero’s gameplay. The game isn’t for the faint of heart. It will punish your thumbs and your patience, and honestly, it’s all the better for it. There’s an undeniable sense of satisfaction that comes from utilizing every trick in your arsenal to overcome the seemingly impossible challenges the game throws at you.

The 10 Stages of Grief 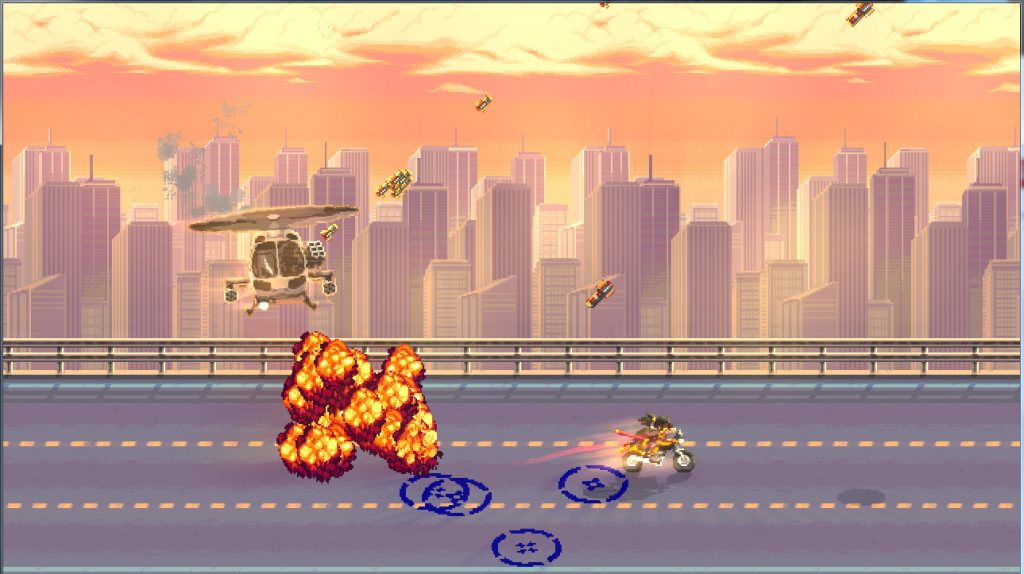 Katana Zero’s 12 stages are unique, and each presents numerous threats to avoid as well as murderous possibilities for taking out the scum of the city. You can manipulate factory machinery, such as conveyor belts and pistons, to turn unsuspecting gangsters into tomato paste. Likewise, luring baddies clueless into their laser traps, reducing them to twitching chunks is as cruel as it is satisfying. Not only are the environments full of ways to murder your enemies, some of them even offer chances for stealth, like slipping into crowds of NPCs to hide from patrols or using a club’s blaring music to conceal your approach. All of these elements promote experimentation and keep each new area fresh and exciting.

One of my favorite stages flips the script entirely. Rather than slinking through seedy hotels or industrial areas, you’re racing a motorcycle through a bustling freeway for some high-speed hijinks. This brief segment reminds me of the excellent motorcycle level from the Neo Geo classic Shock Troopers as you avoid gunfire and cut down waves of enemy bikers. It ends with a bang, too, as you go toe-to-toe with an heavily-armed gunship in one of the game’s more notable boss encounters.

When you’re not on the hunt, the story unfolds in visits to Dragon’s apartment and at his psychiatrist’s office. These brief intermissions do a fantastic job of fleshing out the game’s surprisingly engaging story and memorable cast of characters. There’s an intriguing dialog system at play, too. Conversations have a natural cadence, and you can either choose to wait to respond to whoever is speaking to you, or rush them along by pressing a button before your responses appear. While barreling through a discussion does move the action along faster, it also presents consequences that can affect the story. One particular instance where I was rude to a receptionist in a mission area caused her to remember me. Unluckily for her, my employer was less than happy about this and had her murdered to cover his tracks.

I was so impressed with the way these dialog scenes could impact the story that I found myself repeating them and over to see what would happen. Given Katana Zero’s relatively brief play time (I finished the campaign in just over four hours), these dialog sequences add some welcome replay value to the package. 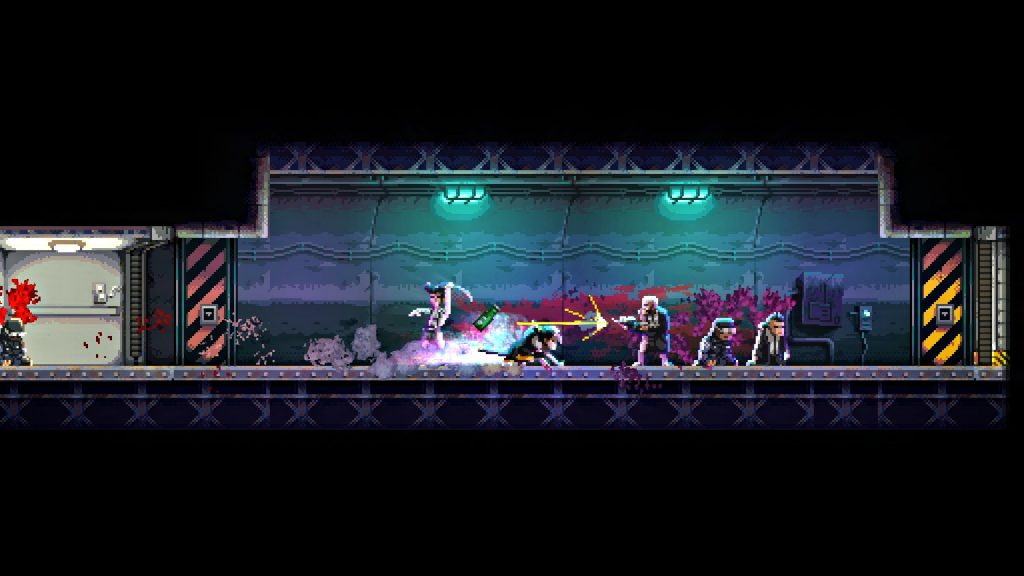 Katana Zero’s challenging, twitchy gameplay is as rewarding as it is addicting.

Katana Zero’s presentation is nothing short of pure pixelated perfection. Though the character sprites are tiny, they’re overflowing with charm and style. Subtle details, like the way Dragon’s scabbard sways as he strolls, to the way he fast forwards the tape in his cassette player to each stage’s theme, are just awesome. The game also sports some impressive lighting effects and outstanding character designs that bring the retro-noir aesthetics to life.

As a die-hard fan of the synthwave genre myself, I couldn’t get enough of Katana Zero’s soundtrack. Artists Bill Kiley and LudoWic provide superb synth-laden arrangements that compliment the game’s cyberpunk setting and match each scene perfectly. Seriously, you owe it to yourself to add this soundtrack to your playlist posthaste. You’ll thank me later, I promise.

Rage of the Dragons

Hands down, Katana Zero is an absolute blast and a must-play for anyone with a love for 16-bit style ninja games or Hotline Miami. It’s a stylish side-scroller that looks as sharp and cuts as deep as a katana thanks to its challenging yet rewarding gameplay. My only real complaint is that it’s such a short burn. Most should be able to make their way through the game’s story in less than five hours. Still, the pacing feels perfect from a narrative standpoint, and you’ll want to play through the game several times to see how the different dialog choices shake things up.

Simply put, if you’re a fan of Devolver’s previous offerings then Katana Zero is a game you won’t want to miss.

Full disclosure: This review is based on a copy of Katana Zero provided by the publisher.