The Yakuza’s been eliminated, but what’s next? 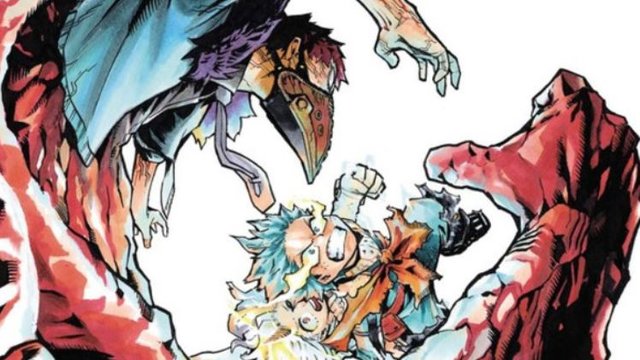 And so ends the belabored, divisive saga of Overhaul and his Yakuza goons. As if channeling writer/artist Kohei Horikoshi’s own fatigue, Volume 18 of My Hero Academia wastes no time in pummeling Overhaul himself, opening with an Eri-charged Midoriya engaging the mafia boss in a terrific aerial beat-down. What ensues is a series of setbacks: Overhaul’s done in and The League of Villains makes off with his Quirk-erasing experiments, rising star Mirio Togata’s now rendered Quirk-less, and pro hero Sir Nighteye’s mortally wounded. It’s a bittersweet victory — the Yakuza may be done for, but the losses involved present foreboding developments for the future. What, exactly, they may hold remains largely unknown even within the current serialization, but My Hero Academia‘s strong characters and development keeps us rapt.

Even so, the arc’s conclusion doesn’t land gracefully — sad as Nighteye’s untimely demise may be, the “Midoriya changed the future” narrative still feels forced. As elaborated before, thanks to Midoriya’s role as protagonist — and really, My Hero Academia‘s story beats as a shonen manga — we never once fear this won’t come to pass, and we’re compelled to treat Nighteye’s shock and awe with exaggerated eye-rolls rather than share in his delight. While thankfully his own farewells to Togata cushions this thematic clunker with some genuine heartbreak, not even his regrets with his star pupil or All Might prevent his conflictive pragmatism from being Overhaul’s weakest story element. (I also admit it was hard to follow certain action scenes in the first chapter, namely whatever happened when Uraraka subdued Overhaul. A surprise, given the typical strength and easy-to-follow telegraphs of Horikoshi’s art.)

Still, it’s not as if Overhaul rendered the series worse for wear, and now that’s it wrapped up, we can move on to other things; namely, Bakugo and Todoroki’s second attempt at the Provisional License Exam. And they’re not alone: Shiketsu High’s ever-passionate Inasa Yoarashi, as well as the real Camie Utsushimi — you may remember her as the absentminded flirt the bloodthirsty Toga previously impersonated (strangely, she’s still alive, but her discombobulated personality pays little heed to that) — are also taking the exam, and so we engage in some friendly rivalry after Todoroki and Yoarashi previously got off on the wrong foot. Good thing, too, since they’ll have to yet again learn what it means to be a hero, this time by reaching the hearts of children.

Cool as this cover is, it only covers the first chapter. 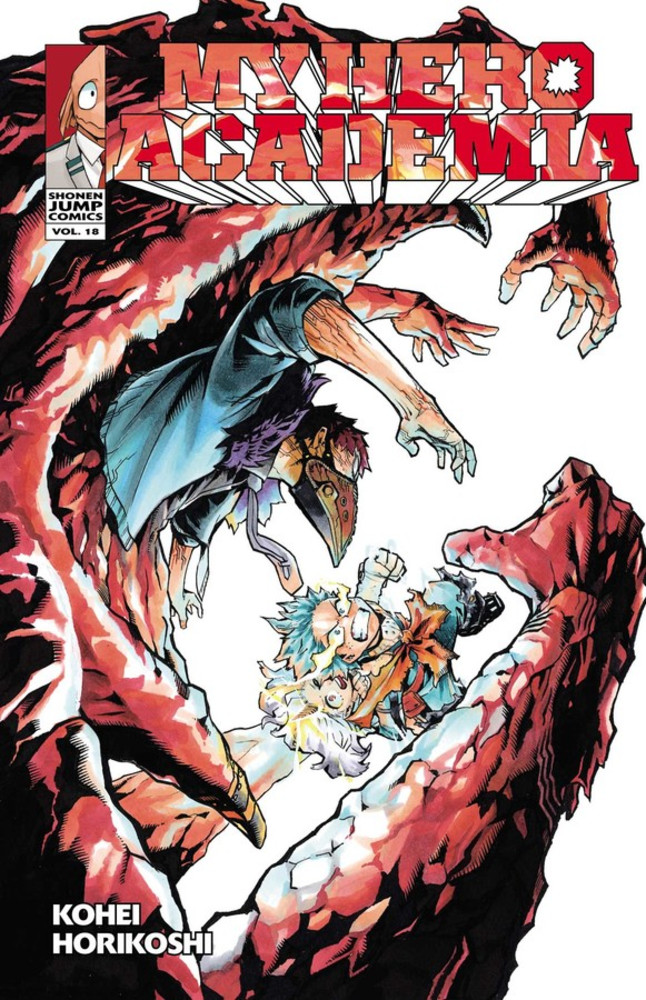 A much-needed reprieve from three-volumes’ worth of brawls, this light-hearted contrast between uber-powerful, yet problematic up-and-comers and precocious tykes who may very well provoke doomsday (“The Quirk Singularity Doomsday Theory,” as we’re told, derives from the fear of uncontrollable quirks blended through generations) is a much-needed step for our top heroes to grow. While the previous license exam also enforced the ideal that heroes can’t always rely on brute strength to eliminate problems, I much prefer how this condensed lesson approaches the matter: as opposed to eventually degenerating into fisticuffs (an ill-advised method for this particular venture; regardless, that doesn’t stop the hot-headed Bakugo from attempting it, anyway), My Hero Academia gets to flex its funny bone in our young heroes’ misguided attempts at reaching out to kids or Gang Orca’s, uh, “lessons” on discipline. It’s a humbling exercise for all involved, not the least in Bakugo’s pep-talk with the ringleader proving that, yes, our abrasive rebel possesses an inkling of self-awareness.

(Speaking of comedy: I won’t spoil it, but “have some cheese” may very well be My Hero Academia‘s best laugh-out-loud moment thus far. Trust me on this one.)

Of course, it’s not all fun and games — Endeavor, Todoroki’s abusive father and the current #1 Hero, is watching his son from afar, but his conversation with the now-retired All Might reveals his true motives. It’s not outlandish to suggest there’s some awkwardness here —  we’re talking about a guy who’s repeatedly abused his family for the sake of eugenics, and while Todoroki’s brush-off at the end proves My Hero Academia won’t sweep his personal history under the rug, his earnest diligence in earning Todoroki’s respect can rub some the wrong way. How the series will tread this delicate subject will be a careful point of contention into the future, but at the very least, his mere presence in this playtime exercise initiates the gears for a redemption arc. (His conflicted gaze within Chapter 166’s final page says it all, really.)

Despite its missteps in wrapping up an already-controversial arc, My Hero Academia seems set for the future. Careful foreshadowing (namely a surprise focus on a relatively-neglected Class 1-A member for the next volume), villain teases, and growing camaraderie render the smash-hit shonen an engaging read. 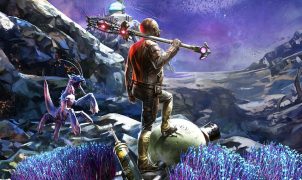 The Outer Worlds: Peril on Gorgon DLC provides much of the same fun of the original story, though is ultimately flawed by how dated it feels.