Bow to Blood – And These Other Jerks! 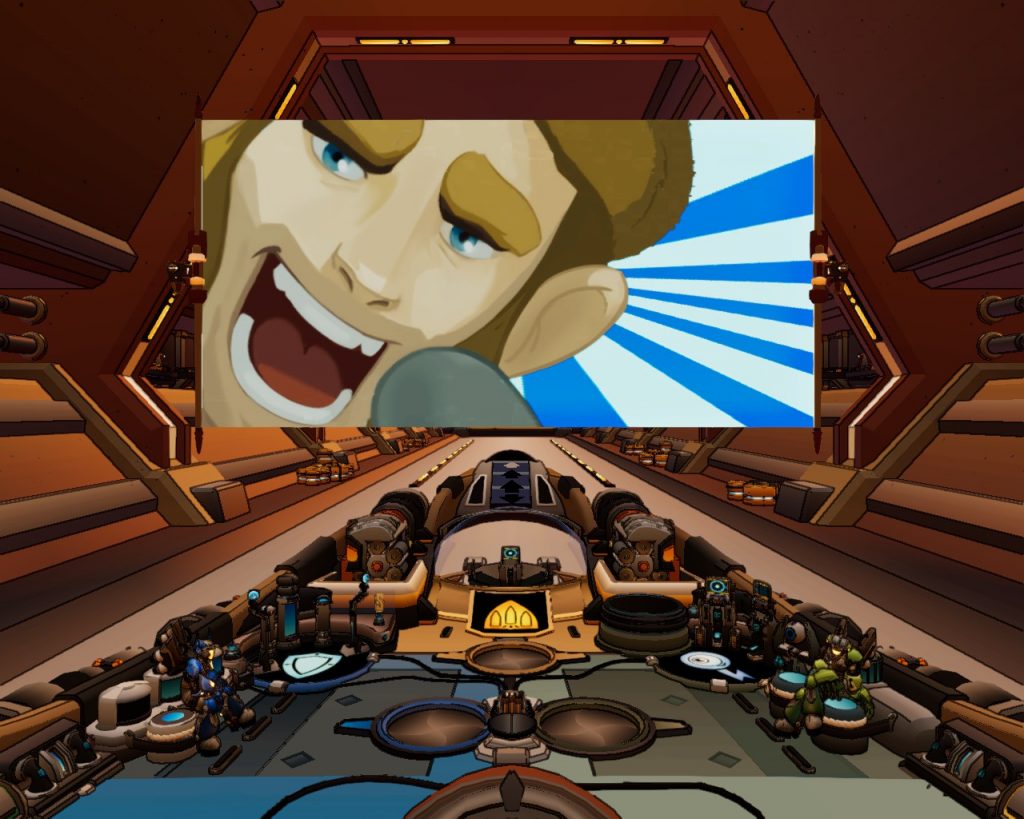 For a game called Bow to Blood, I have to admit I was expecting a lot more blood and slaughter in this title. True, the situation is violent. What with robots firing missiles at you and a noughties-Nickelodeon style announcer ordering drones to shoot you for the fun of it, I just don’t recall seeing a lot of blood.

In that way, Bow to Blood actually paints quite a cheerful view of the future. Sure, the landscape looks completely desecrated (thanks, climate change deniers!) But if we’re still pitching reality shows, I guess things can’t be that bad. I’ve heard the Hunger Games comparison once or twice, but as violent as the arena battles can get in this game, I don’t think that’s fair. The tournament does appear to be all in good fun. Like the wrestling match of the future, sure, it looks violent, but no-one is in any real danger. Perhaps this is less of a game and more of an attempt to pitch space-based reality shows before the imminent annihilation of the planet. 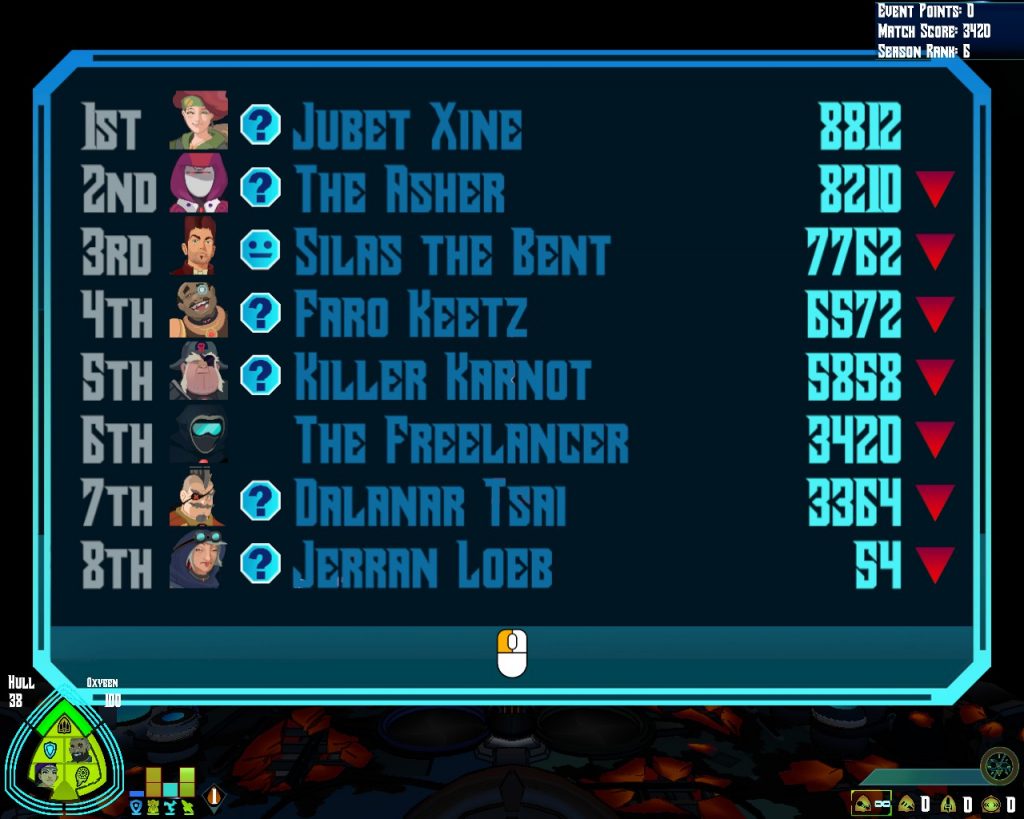 In Bow to Blood: Last Captain Standing, you take the role of a ship-captain known only as “The Freelancer.” In this world, reality TV is still as popular as ever, this time recruiting eight competitors (including The Freelancer) to become Champion of the Arena. You take your pretty awesome spaceship, complete with two crew members who will engage in witty banter throughout, before entering a series of battles, with the aim of gathering the highest number of points to climb up the rank and best your opponents.

If during the battle your ship takes too much damage, you and your crew will have to make an emergency jump. As I mentioned earlier, you’ll survive this fine and your crew members will walk on home to their loving families, you’ll just be disqualified from the match.

Probably my favourite thing about the game is that your ability to progress in the game is not solely reliant on how well you do in the battles. At the end of each round, rather than it just eliminating the person with the least points, the higher-ranking competitors vote between the two lowest scoring captains to decide who will stay. Throughout, other competitors will engage with you, occasionally offering you deals or assistance. If you say or do the right things, they will like you more and become more likely to keep you around. (Or you can give them everything they want, and they’ll still screw you over. (Because that’s a better life lesson than I’ve seen in games for a while!) 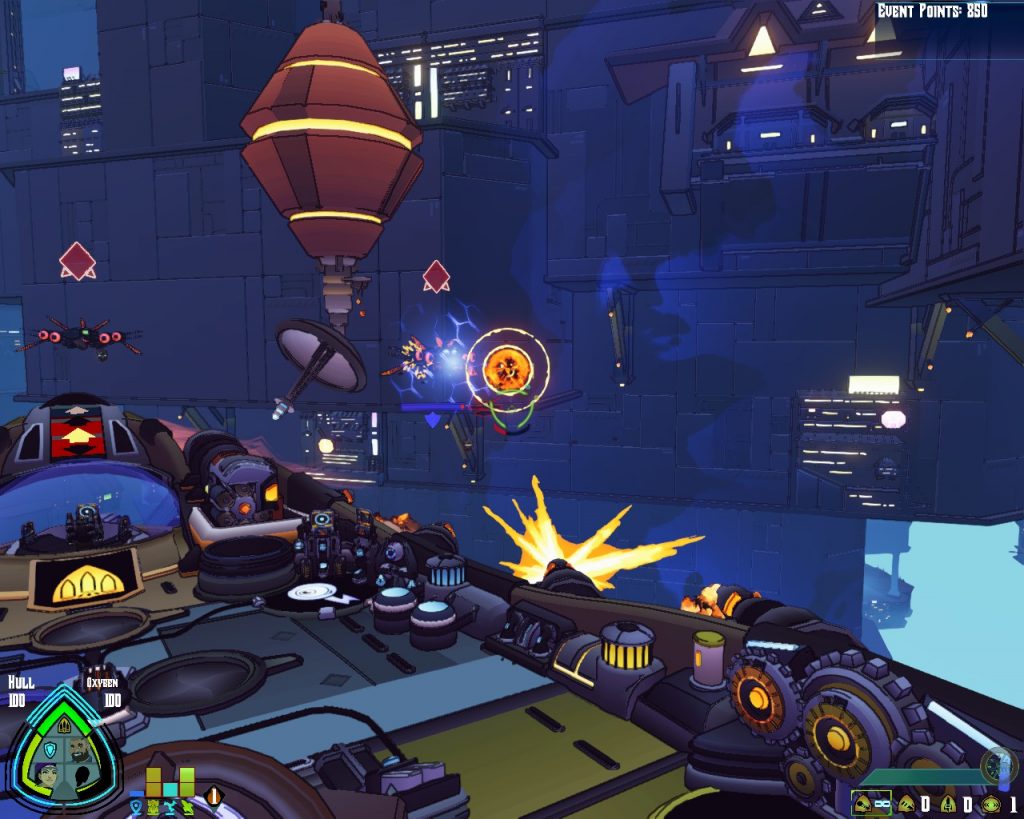 Even if you can’t rely solely on your competitors to keep you in the running, knowing that the goal is more than just “being the best” really took the edge off the battles for me. Rather than just slamming the shoot button over and over, screaming at the screen, I pretty much just surfed around and let myself have fun. Each battle is randomly generated, so you can’t predict what will come. Mainly since the skirmishes range from trying to destroy a massive boss spaceship and the spaceship babies it keeps bringing up behind you to throw you off- to a literal Easter Egg Hunt!

As one would expect from a game with a VR option, everything is delightful to look at. Even your cabin has the perfect colour scheme and looks like a believable interpretation of the future. Plus, as much as I hate to say it, the explosions in this game are very satisfying!

The randomly generated battles can make planning for each match more difficult. If you’re given a chance to screw over other players at the end of one round, you have to consider that you have no idea what the next round will throw at you. Sometimes, battles can end up being remarkably hard! You can’t repair your ship during a match (or even between them), and once your hull starts taking damage, it won’t stop unless you cower in under a rock until the battles over. And I was playing on normal mode- I only assume on the hardest setting they occasionally drop wild animals out of the sky to punch your crew members in the face.

Screw or be Screwed 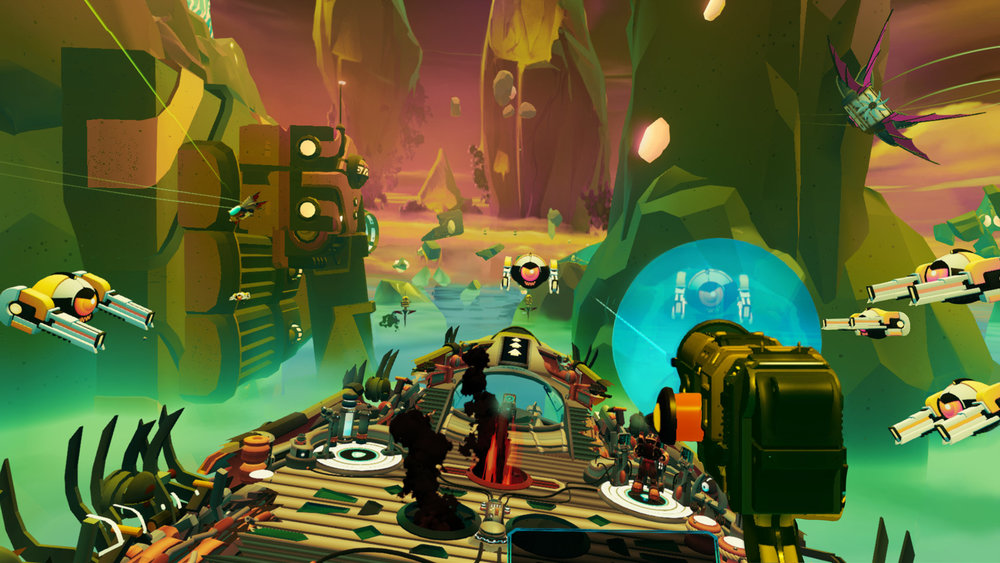 On some level, the characters in the game come across as a little generic. You have the fancy one, the violent one, the sassy one, etc. But one thing can be sure- no one is here to make friends! These guys want to be champions as much as you do, and they’ll do whatever it takes. I like this a lot, as it’s more interesting than the player being the centre of everything.

If, for example, you make a deal with someone, you will get the opportunity to either honour your agreement or go against your word, get the reward and lose all their favour. But don’t think that everyone else is an innocent party, because they might turn the tables and do the same thing to you- for no other reason than to be a massive jerk. (They might claim that you’re a threat or try to give an excuse, but at the end of the day, it’s just because they’re jerks!) Even if it makes the game harder, I love this as it makes the characters a lot more interesting.

It also adds a new, more exciting layer to the “player choice” aspect in games. Most of the time player choice is between A or B, and you know immediately what the consequences will be. In Bow to Blood, you can’t be sure what the implications of your choice will be until the end of the round. Even if the dialogue and deals are repeated, the consequences of the decisions depend on which character you are talking to or how your other choices went.

Bring on the Blood

Ultimately, I like Bow to Blood. There is something very classic about it. The controls handle well, and the battles are consistently entertaining, even if they are repeated. The concept might not be the most original, but it’s presented uniquely. There are many different aspects to the game, all of which you need to pay attention to if you want to win. It’s fun, funny and doesn’t take itself too seriously.

As a small note, Bow to Blood also proves how easy it is to create a diverse protagonist who relates to all players. The Freelancer has no gender. Other characters just refer to them as “The Freelance” rather than using pronouns. Their appearance underneath the cloak could be anything the players feel it should be, which works especially well. However, the game does do that weird thing of assuming you’re great before you’ve actually done anything exceptional. All the other competitors would tell me my “reputation proceeded me” and that I’d been “doing a great job so far.” When I hadn’t done particularly well in any of the battles, it’s always a little weird when the player is predestined for greatness, especially in a game that progresses no matter how well you do.

There is a lot of replay value here, as you can go through it again and see if you make the same decisions work this time. Sure, getting voted out before the end is frustrating, but you get to back and learn from your mistakes. Or maybe you won’t and can just fly around shooting things, buttering everyone else up, so they won’t vote you out. Or you’ll go back and get screwed over the same as you did the first time. In many ways, it’s a great reflection of reality television.

Full disclosure: A PC review copy of Bow to Blood: Last Captain Standing was provided by the publisher.

How does the latest Kirby spin-off fare? HAL Laboratory’s string of Kirby 3DS spin-offs has reached a grand total of five titles, and with Kirby Battle Royale likely closing…