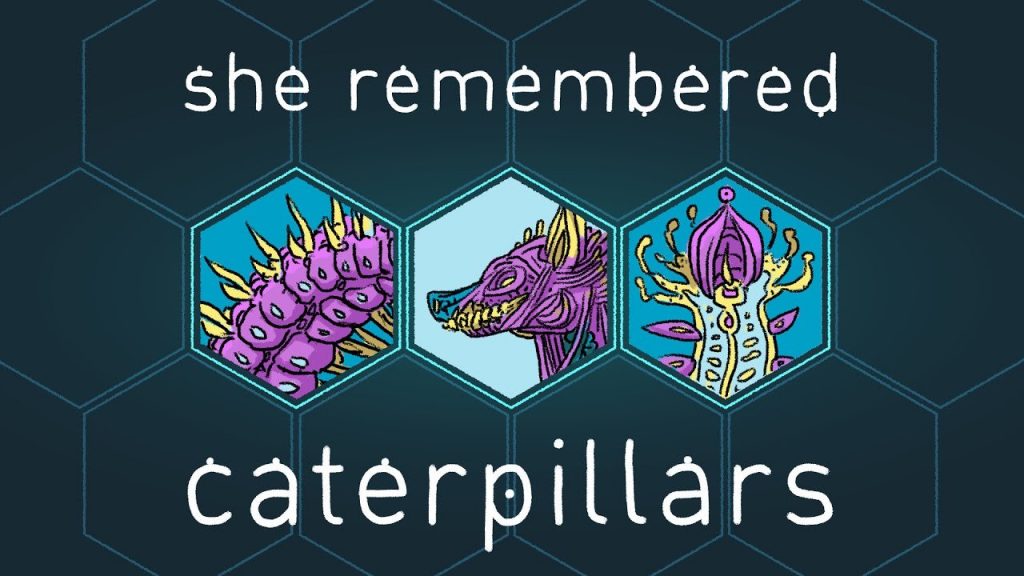 It’s been a while since I’ve last played a game like She Remembers Caterpillars. From its simplistic-yet-deep gameplay to its atmospheric presence, to its artistic-yet-melancholy story, almost every aspect about this game is smart, yet slightly pretentious in the same kind of “video games are art” way that certain flash games on sites like Kongregate and Armored Games were back in their heyday. That might sound somewhat negative, but it isn’t. I liked those kinds of games, and I’m sure that plenty of other people did, too. And, because of that, I naturally found myself drawn to She Remembered Caterpillars in no time.

Like a passing memory of a long-lost love, She Remembered Caterpillars is short, bittersweet, and, despite appearing benign on the surface, has the potential to become increasingly complex the more you prod at it. It’s the kind of game that you might comfortably sit down with for an entire afternoon (so long as you don’t get too frustrated with it, that is), and find yourself a better person — if only in regard to your ability to solve puzzles — afterward. It’s fun, it’s smart, and, most of all, an adventure worth undertaking… potentially, anyway (more on that at the end, though). 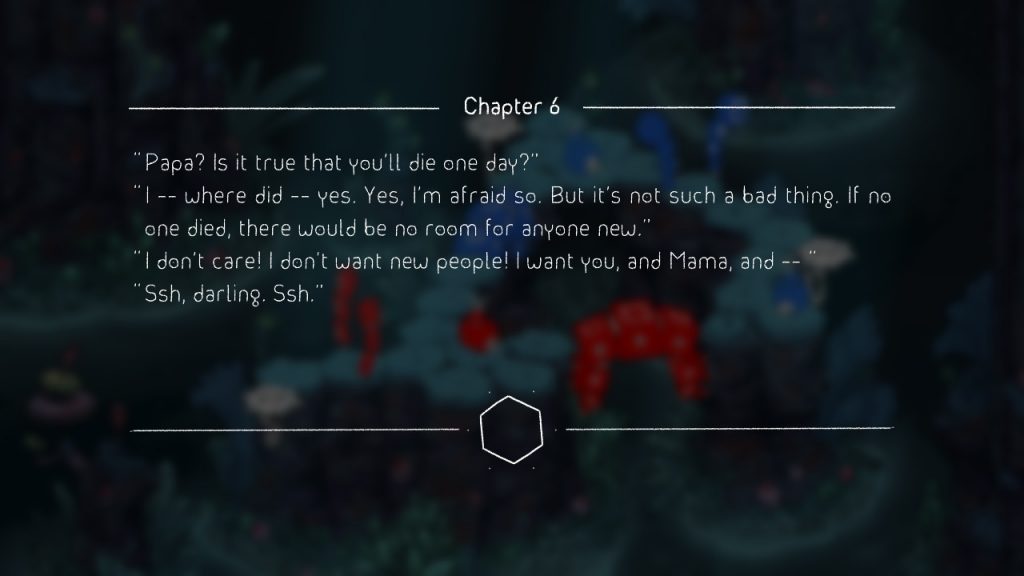 Remember how I said that this game had a slightly pretentious element to it? Well, that slight pretentiousness comes about thanks to the game’s story. She Remembered Caterpillars chronicles the trials of a scientist attempting to save her estranged father’s life via the use of genetically altered micro-mycoparasites (basically little mushroom fellas) known as “Gammies”. At first glance, that story might seem straightforward, and I suppose that technically that wouldn’t be wrong, but She Remembered Caterpillars ups the narrative ante with a liberal sprinkling of ambiguity. While the story itself is enough to tug on your heartstrings at least a little bit, much of the narrative is intentionally blurred so that the player can fill in the blanks for themselves.

As I’ve already said, I’m no stranger to this kind of artsy story-telling. And I do, truth be told, enjoy it from time to time. Unfortunately, She Remembered Caterpillars tends to be ambiguous to the point of obscurity. Outside of the basic premise, it was hard for me to follow exactly what was going on. I’m sure that this was done intentionally — as the narrative holes feel carefully crafted — but making something too mysterious can leave it feeling pretentious — something which this game errs on the side of being (although not egregiously so). 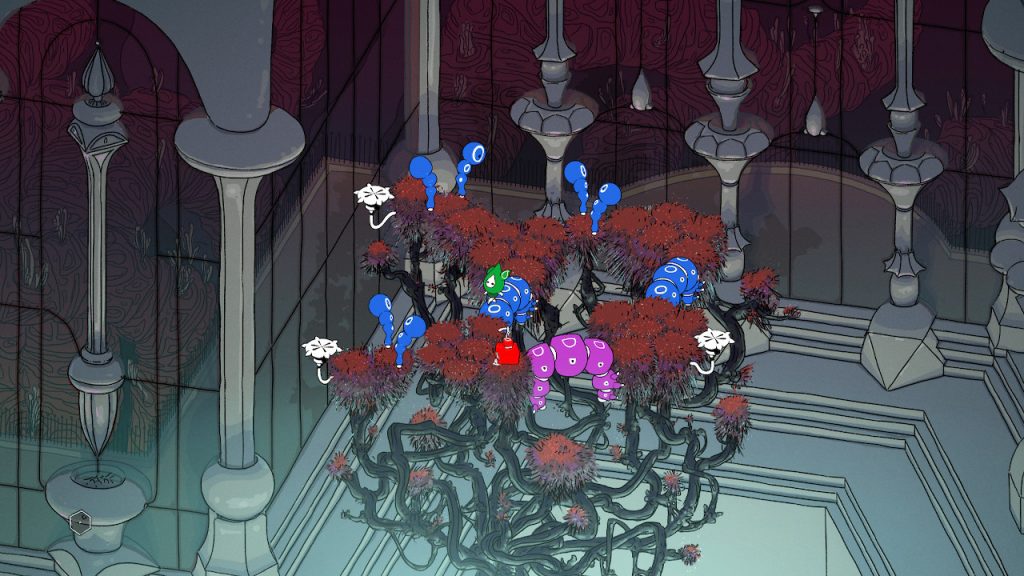 Colors are the key!

Between the gorgeous, strangely intoxicating visuals and haunting-yet-peaceful music, and condensed-looking levels She Remembered Caterpillars sets itself up to be as relaxing as possible. And, surprise surprise, the premise is simple as well. All you need to do is get each of your Gammies to a… well, they kind of look like mushroom-lily pad hybrids. Don’t be fooled by any of that, though — relaxing though it may appear, your brain will be doing anything but. Like many great puzzle games out there, She Remembered Caterpillars doesn’t throw a plethora of crazy mechanics at players to create unnecessary complication but instead uses a very small number of mechanics in varied and expressive ways.

When it comes down to it, there are really only four things that you need to pay attention to — bridges, barricades, Gammies, and, most importantly, the colors that each of those things is. The colors of your Gammies dictate what objects they can interact with. Is it the same color as a bridge? It can cross over it. Is it the same color as a barricade? Then it can’t. Still with me? Good, because there’s more. Gammies — all of whom come in one of three primary colors — are able to fuse with one another to create Gammies of secondary colors (red + blue = purple, etc), and can also unfuse at will. These secondary colors interact with obstacles in the same way as their primary colored counterparts (green Gammies can cross over blue and yellow bridges, for example). The game also throws in a few additional mechanics later on, such as machines that can remove and change Gammies’ colors, and bridges that can only be crossed by primary colored and colorless Gammies. And, much like everything else, figuring out how these work isn’t anything difficult at all. 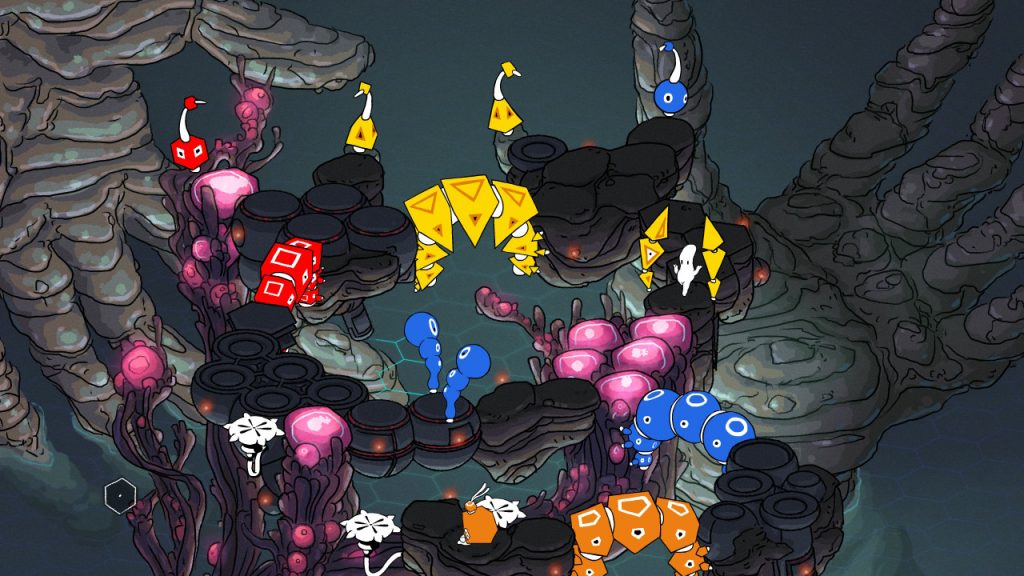 Hey, you! Put some clothes on!

I’m sure that you know where I’m going with this by now. No single element within She Remembered Caterpillars is overly difficult. But when you put all of those things together in clever ways, as this game very much did, then that’s a different story. The first word that comes to mind when trying to describe these puzzles is “cerebral”. And no, that isn’t a story-related pun. None of these puzzles, save the first few, can be solved in a few simple steps, and nothing is ever completely straightforward. Puzzles, for better or worse, require constant backtracking and “herding” of your Gammies from place to place. Because of this intense complexity, most of you out there (myself included) aren’t just going to magically “get” the answer as soon as you look at the puzzle. Each of them, especially the later ones, require a trial-and-error approach and a healthy dose of what can simply be called “just messing around”. While I do appreciate how well thought out each of these puzzles are and consider the setup to be a net positive overall, I won’t deny that a few of the levels felt frustratingly cluttered due to the over-abundance of steps needed to solve them. But, hey, I’d rather have a puzzle game be challenging than easy at the end of the day, so I can’t complain too much. 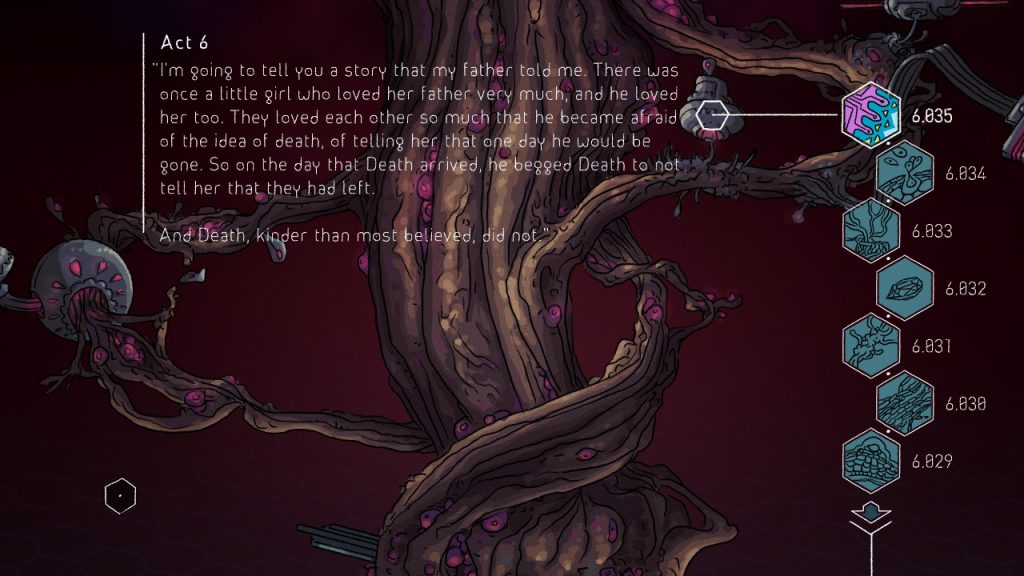 This is the end of the road for Switch users as of now, I’m afraid.

Now that we’ve gotten all of the normal parts of the review out of the way, there’s one last thing that I’d like to talk about — the fact that this game is broken. That’s probably not the best way to end a review that’s been predominantly complimentary but just stick with me because I promise that it will make sense. She Remembered Caterpillars released late last month on PC and Switch, and, while the PC version seems to be working fine, there’s kind of an ugly issue that pops up with the Switch version… it’s literally unbeatable. The game soft locks after level 34, and there doesn’t seem to be any way of fixing that problem currently.

Reviewing a game with a known bug isn’t anything new — I actually ran into a similar problem last month — as review builds aren’t always complete. Unfortunately, this isn’t a review build. This game has been out for several weeks, meaning that people have been paying for an incomplete product all of this time. Sure, what’s playable is solid, but that isn’t enough to compensate for a game-breaking bug. So, why exactly am I being so upfront about this? Easy — because what I’ve said about this game (bugs aside) and my final review score are going to look contradictory, and I wanted to give you, my dear reader, a heads-up as to what exactly is going on.

Under normal circumstances, I probably would have given this game something along the lines of a 3.5/5, or perhaps even a 4/5. Sure, it might get a little too convoluted for its own good at times, but overall it’s an incredibly solid puzzle game and leaves very little to be desired if you’re into purely cerebral minimalism. Unfortunately, as I’ve already made clear, these aren’t normal circumstances. I can’t very well give a game a good score if it’s been out in the marketplace for a good 2+ weeks with no patch in sight (although a patch has supposedly been confirmed). Does this game have potential? Of course, it does — and if you actually want to see that potential recognized then go pick up a copy on Steam. But those of you eager to play it on the Switch? Well, don’t be surprised when your adventure ends prematurely. Here’s to hoping that patch rolls out sooner than later!

Full disclosure: This review is based on a copy of She Remembered Caterpillars given to Hey Poor Player by the publisher. 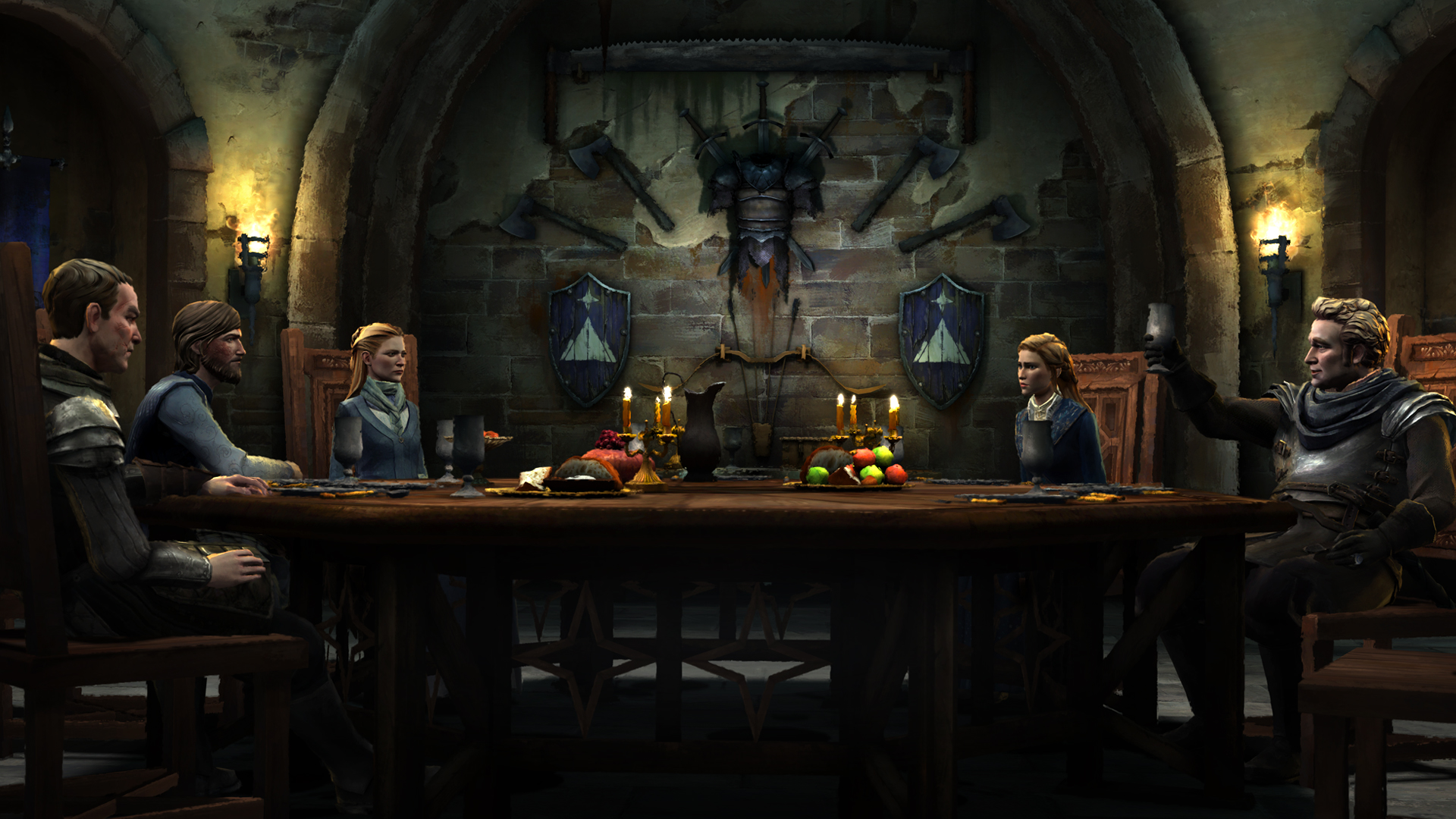 Game of Thrones: Episode 4 – Sons of Winter Review (Xbox One)

The Whitehills had eyes.   The latest chapter in Telltale Games’ narrative-heavy episodic adaptation of Game of Thrones is here. While the previous episode, The Sword in the Darkness,…